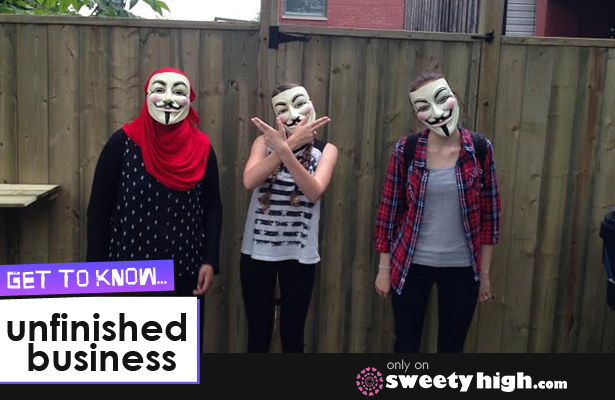 Sita, the guitarist and singer of Unfinished Business, recently spoke with us to discuss the origin of the band, their unique style of music and what it's like to attract so much attention!

Sita and her friends Layla and Fiona never set out to form a punk rock band.

"They didn't listen to that much music then, and we didn't have a common taste in music, but we just thought it'd be cool to have a band," Sita explained.

Sita, Layla and Fiona were all aged 10 and 11 at the time, and a simple form of music suited them best.

"When we were first learning and making up things to do we just tried to pick things that would be as simple as possible, and pop-punk was what seemed to happen when we started playing music," she said. "We didn't even know we were playing punk music until people started describing us as that."

Without realizing it, the group had started playing the fast, simple power-chord riffs featured prominently in a lot of punk music.

"When I was little I listened to a lot of rock music, but we none of us have really listened to any punk music," Sita explained. "We just think its fun to play."

Their group came to be known as Unfinished Business. In the band, Sita sings and plays guitar, Layla plays bass and Fiona plays the drums.

"I played guitar already, because I wanted to learn when I was little," Sita said. "The other two girls didn't know how to play their instruments in the first place. They learned to be in the band."

Sita said it hasn't been too hard for any of the girls in the group to being acquainted to their instruments.

"All we really need to know is the riffs to all of our songs," Sita said. It didn't take them that long to learn, because we don't need to know everything there is to know about the instruments."

For Unfinished Business, songwriting is a collaborative effort.

"We all come up with ideas together for what we think would be fun for a a song," she said. " We try to come up with a chorus together and I write the rest of the song."

They believe it's important to stick to what they know in their writing.

"We sing about stuff that we think is fun," she said. "We don't want to do the thing that every artist does where they just write love songs. We don't know anything about that."

For fans of the budding punk band, Unfinished Business's biggest inspirations might come as a surprise.

"We don't have influences based on the way we play our music," Sita said. "We look up to people like Ed Sheeran, because he's a singer-songwriter, and Bruno Mars."

The 13-year-olds have garnered a lot of attention so far.

"it's been really fun," Sita said. "It's just really cool and kind of crazy how all these people react really well to us. It's not stressful or anything, and I think it's kind of weird how all this stuff happened so fast with people liking us."

Most of the band's attention has actually come from adults familiar with the punk genre.

"Adult react better to us in general," Sita said. "When we play for kids, it'll be at a show with a bunch of other kids bands. When we're with people our age, we're sort of not as individual. When it's just us with a bunch of adult bands playing for other adults, they think it's cool that we're young."

Sita says that the attention has been welcome, if not a little odd.

"I think it's really weird," she said. "We never expected anything like this to happen when we started. We didn't even know we'd be playing shows when we first made the band."

What does Sita think is the biggest appeal of Unfinished Business?

"I don't really know," she answered. "I just think people think the fact that we're young and that we write all our own songs is cool. Just in general, people tend to react well to our songs because they're fun."

To keep up with all of the latest updates from Unfinished Business, be sure to "like" them on Facebook here, and join us at SweetyHigh.com to share your musical abilities with us!