We Tried Universal Yums, a Subscription Box That Delivers Snacks From Around the Globe

Looking to try something a bit more exotic the next time you have a snack attack? Universal Yums might be your perfect solution.

They're a subscription service that delivers a package of tasty treats from a different country every month, introducing fans to delicious new foods, while also educating them on the country and its products. The company was kind enough to offer me their June 2019 box, featuring snacks from Colombia for review—and now I'm wishing they'd sent me two. 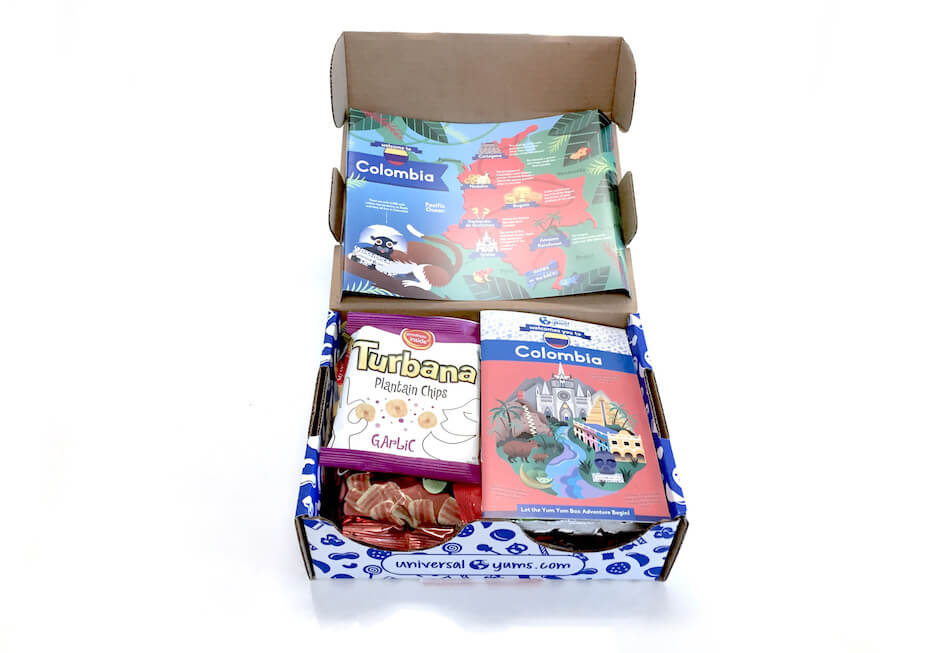 Each box also comes with a handy booklet with trivia and games, as well as detailed information on all of the snacks in the box, and the two larger boxes also include recipes and further content. 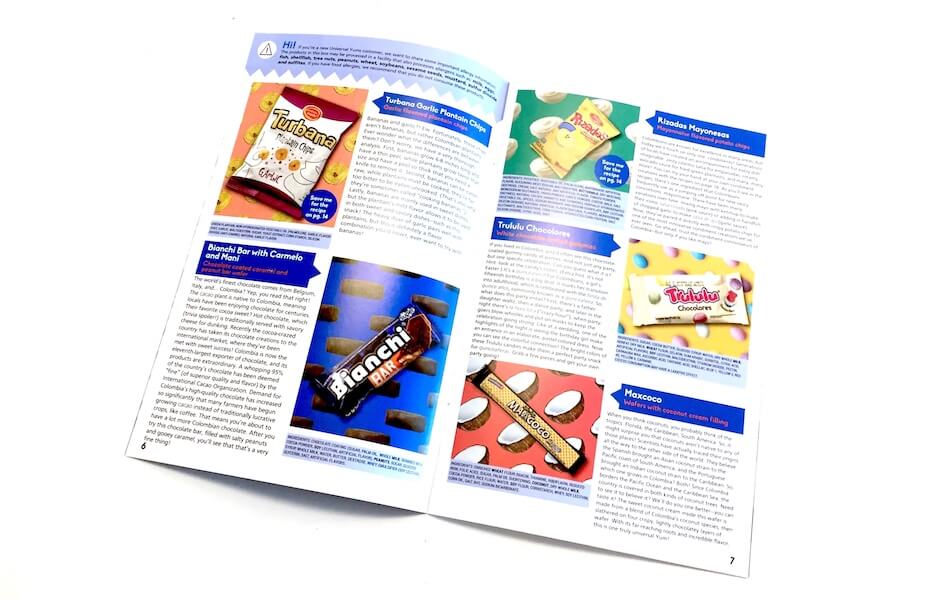 While these crunchy rounds may look like banana chips, they thankfully don't taste anything like them. The neutral taste of a plantain makes them great for either sweet or savory foods, and these thin, crispy chips with bold garlic flavoring or definitely on the savory side of the spectrum. 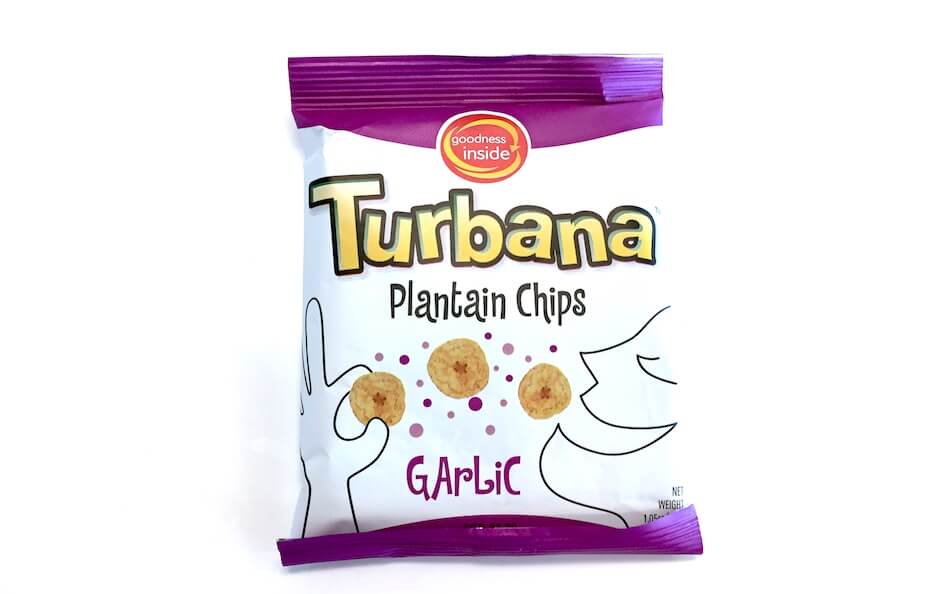 Bianchi Bar with Carmelo and Mani

While these little chocolate bars may resemble a Snickers on the outside, once I bit in, I understood that it was something completely different. The caramel and peanut center has a chewy but firm texture with a flavor that was a lot less sugary than I expected. While I wasn't the biggest fan of the first bar I ate, the second one tasted much better once I knew what I was in for. While it wasn't incredibly sweet, I did find it pretty satisfying. 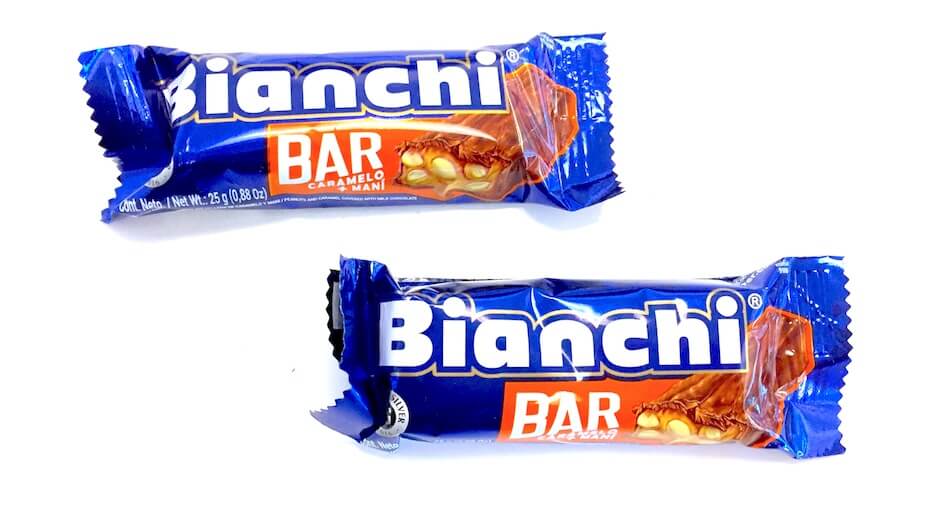 A mayonnaise-flavored potato chip sounds pretty gross, so I was a little hesitant about digging into this bag of ridged potato chips. It turned out I had nothing to worry about. The mayo flavoring was actually similar to chips that would be labeled as ranch or sour cream-flavored in the states, with hints of cheese, garlic and herbs. It actually made me wish Lays would start making their own mayo chips. 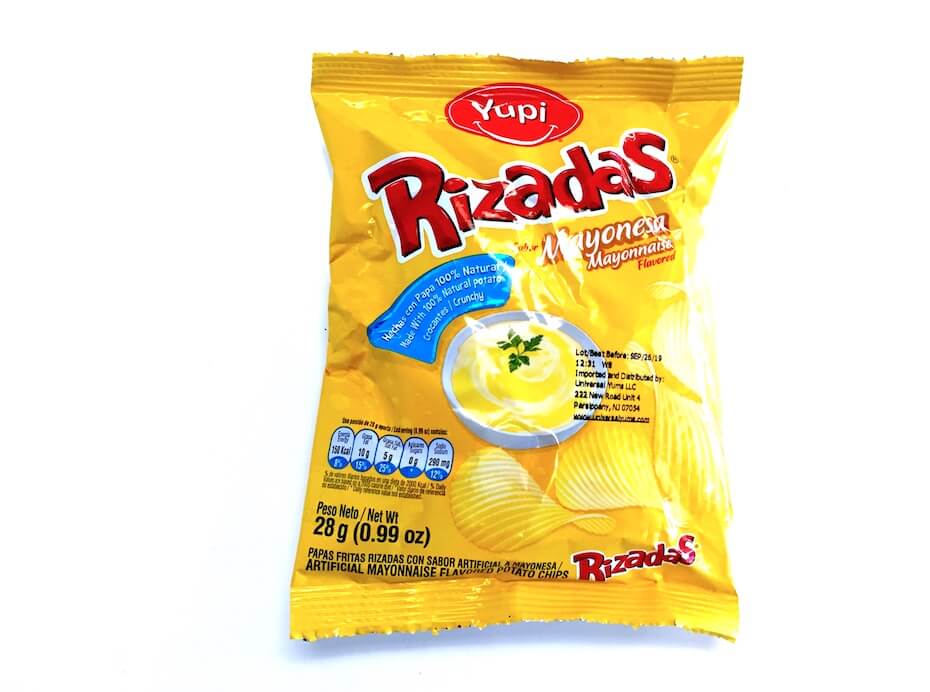 This candy is such a bizarre combination of flavors, but it wound up being my favorite item in the entire box. Imagine a peanut M&M, but instead of milk chocolate, it's filled with creamy white chocolate. Then replace the peanut with a gummy bear. The Chocolores were truly unique and unlike anything I've tried before. Now I'm just sad that I don't know how to get my hands on more. 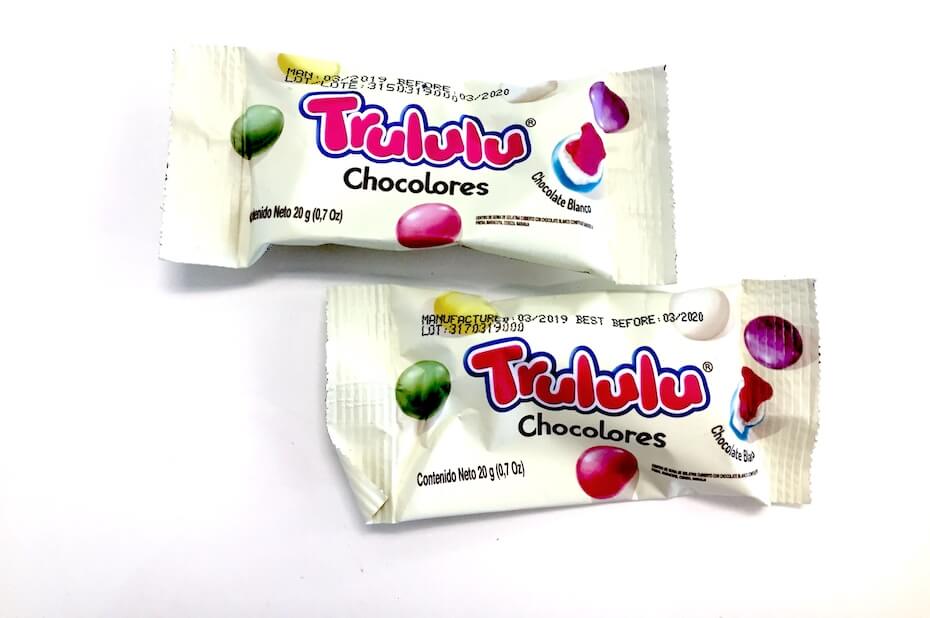 I've always had a soft spot for wafers, but I don't think I'd ever had a coconut cream wafer before. While it had the potential to be a little bland, this wafer managed to elevate its taste with a little bit of chocolate flavoring and enough sweetness to make the coconut cream filling super snackable. 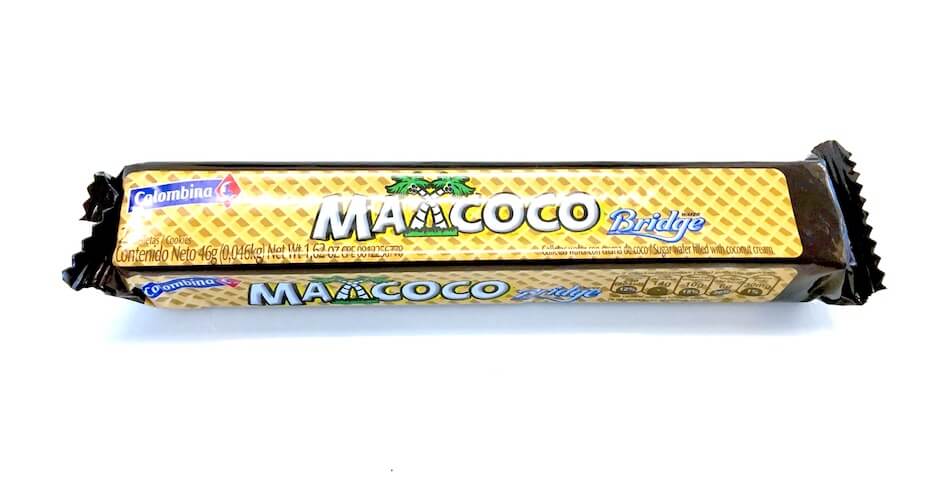 These bacon chips don't actually include any bacon, but that doesn't mean they aren't super tasty. They consist of puffed wheat strips, with stripes to make them resemble bacon, and they've got an appealing light, crispy crunch. Since they're not really smoke-flavored, they don't taste that much like bacon, but they do have plenty of salt, and are also coated in a delicious lime flavoring. 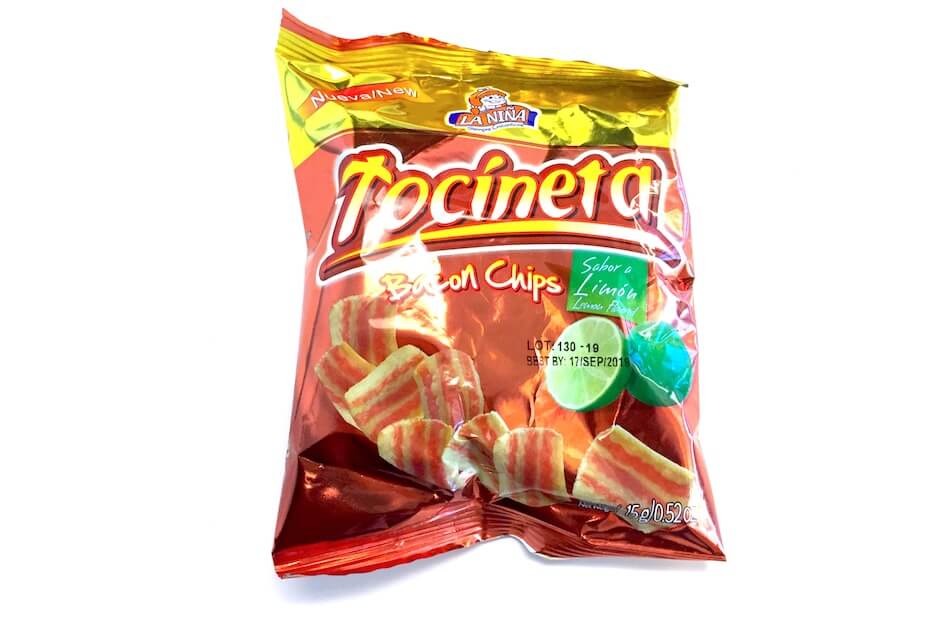 After trying the garlic-y plantain chips early, I wasn't exactly sure what to expect with these plantain cookies. In the picture, they slightly resembled chocolate chip cookies, but when I bit into it, it didn't taste like them at all. Instead, it was closer to a digestive biscuit, combining light sweetness with a little bitterness and salt. While it wasn't bad, it didn't really hit the spot, either. 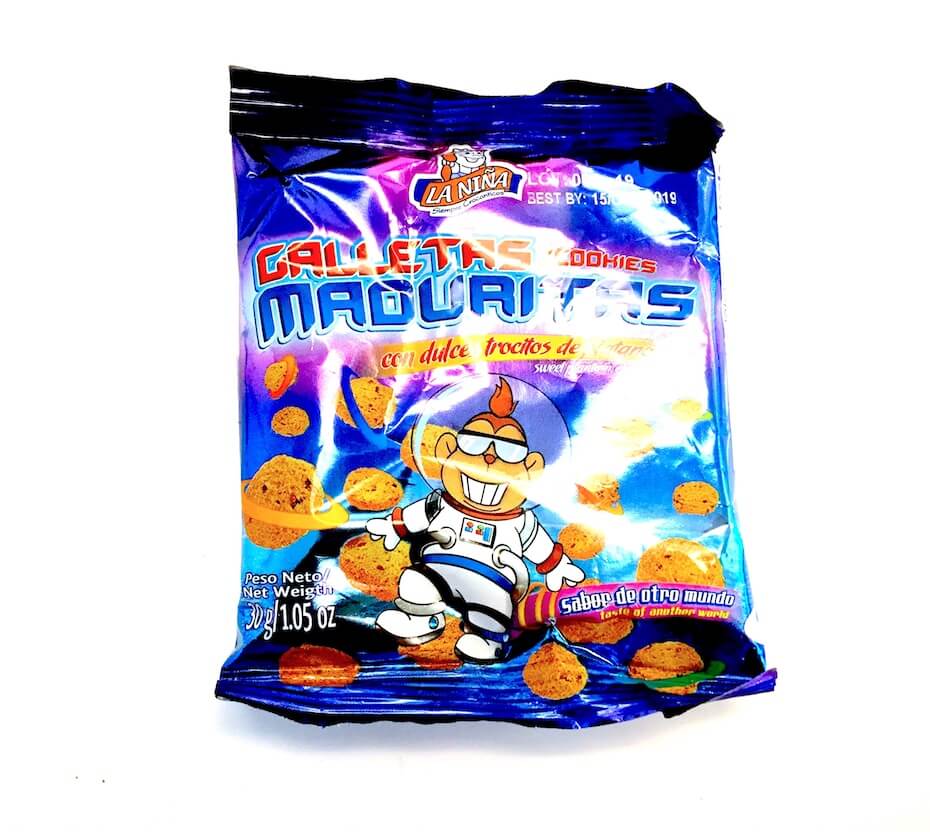 An arepa is a thick South American bread usually made with corn, and it can be stuffed or topped with all kinds of ingredients. These tortilla chips modeled after the food are flavored with cheese and butter. Flavor-wise, they resemble buttered popcorn with the delicate addition of a little cheese powder. They taste incredibly decadent, but that's what makes them so good. 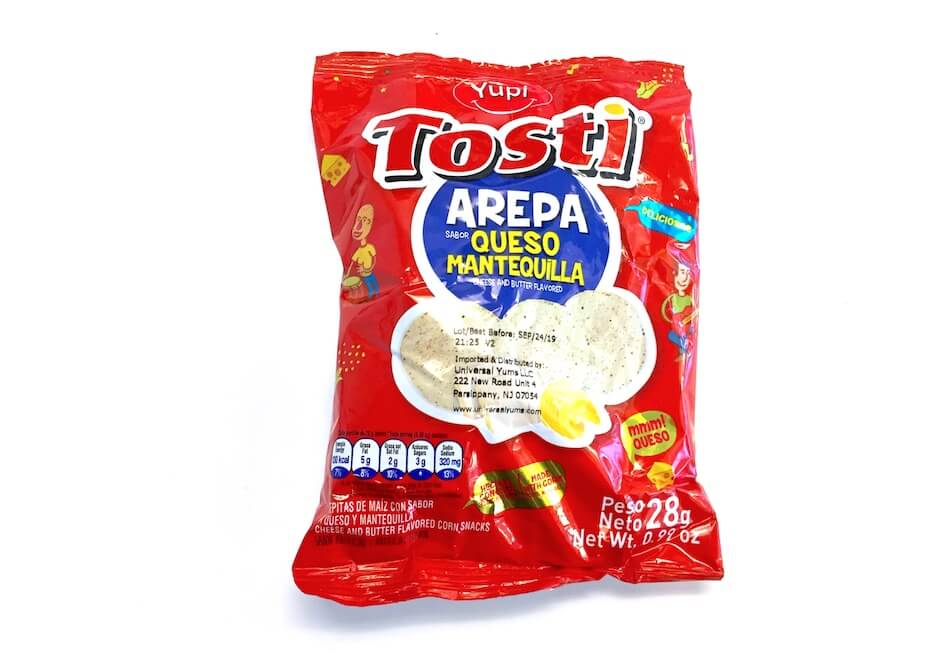 While lime-flavored potato chips in the U.S. usually have a subtle citrus flavoring, these La Niña chips go all in. The lime flavor is sharp and pungent, making these chips resemble salt and vinegar chips more than anything else. If you like those kinds of distinctive flavors, you're definitely going to like these. 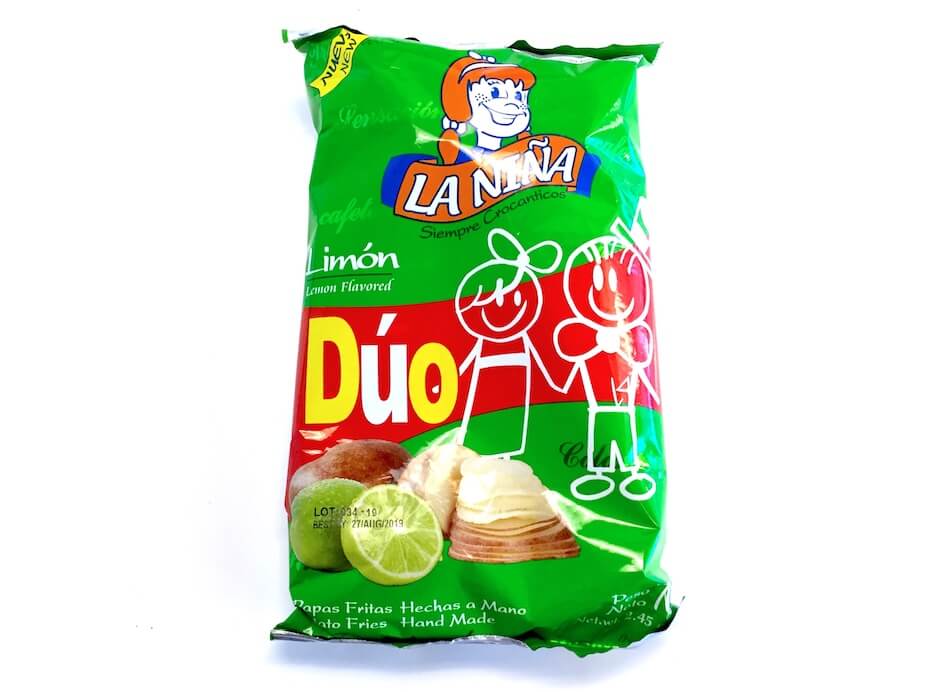 Trululu Gomitas Fresitas are perfect for those with sweet tooths. They're chewy strawberries and cream-flavored gummies coated in a sweet sugar crystal coating, combining tart and creamy flavors to create one perfect candy. They're so delicious that the bag was gone way too fast. This is another one I'd love to see more of stateside. 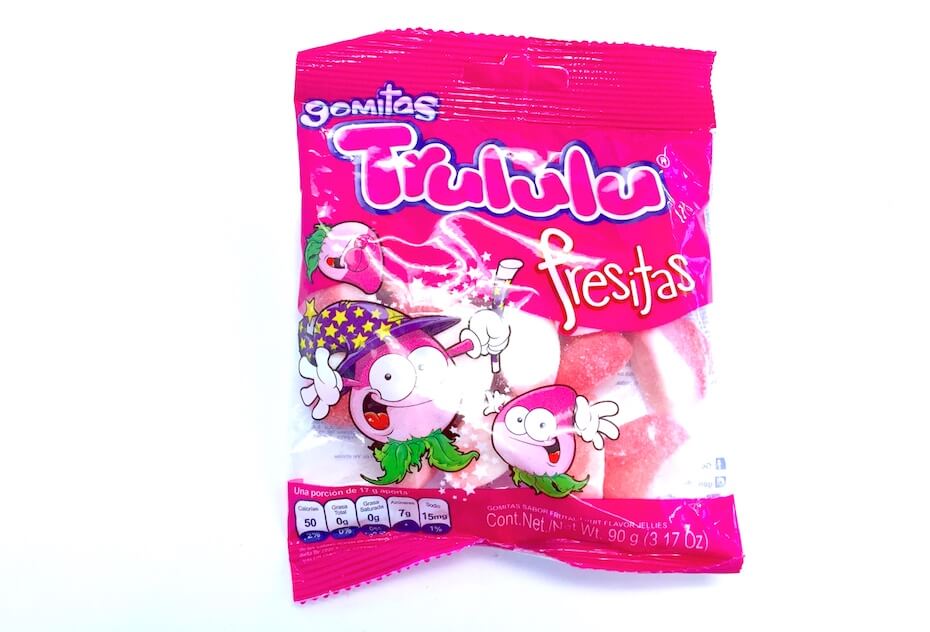 This unique set of assorted candies actually included six different types of dulce con leche caramels. The milk caramel was a pure dulce de leche candy consisting only of condensed milk and sugar, making it ultra succulent and sweet. It fact, it was so sweet, I couldn't eat the whole thing at once. The coffee flavor maintained that sweetness, but added the depth of a rich, dark coffee, with hints of bitterness and nuttiness. The guava flavor was quite interesting because it consisted of a thin layer guava jelly over another layer of dulce de leche.

I was surprised at how well the fruit and caramel flavors melded to create something totally new. The panela was a block of unrefined cane sugar, and it was so sweet but so satisfying. The orange caramel was my favorite in the box, adding tart orange peel and citrus to create a bright, complex flavor absent in the other candies. And lastly, there was the coconut candy, which added some texture and depth to the plain dulce de leche candy. 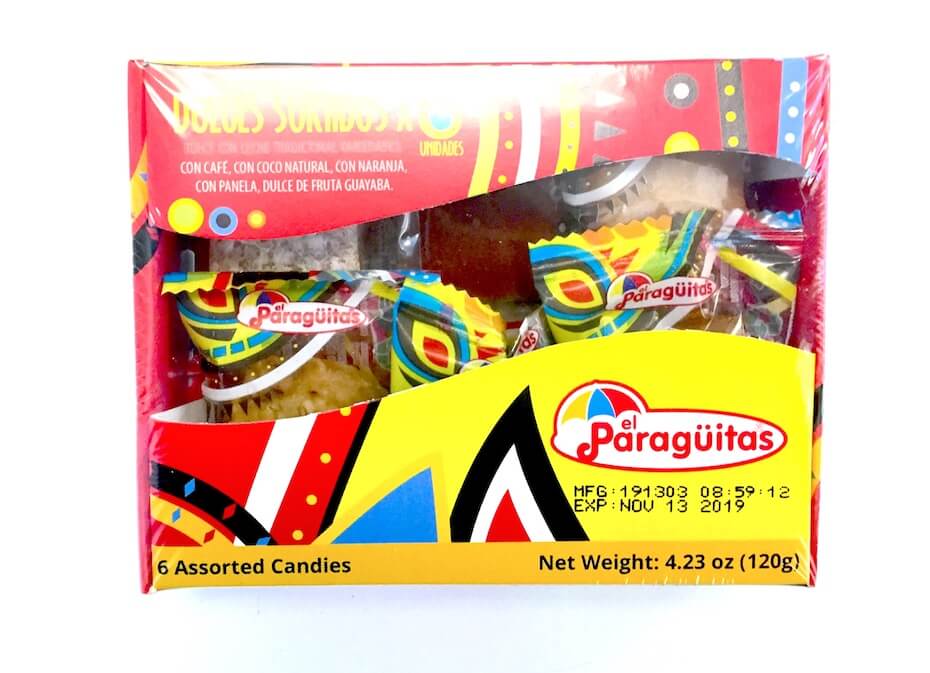 Last but not least, the Colombia Box's Yum Bag included a variety of tasty loose candies. The Passionfruit Bon Bon Bum pops may have been the best lollipops I've had in my life. Their candy's complex fruit flavor was sweet, yet tart, and even included little black "seeds" like those found in a fresh passionfruit, all wrapped around a bubblegum center. The Supercoco Tirudito was kind of like a long, thing Tootsie Roll, but bursting with caramel-y coconut flavor instead of chocolate. It was soft and chewy, with the occasional crunch of toasted coconut, and I liked it a lot more than I'd expected to.

Lastly, there was the coffee-flavored Cafe Gurme, a chewy candy that tastes like a coffee packed with sugar and cream. There were only four of them in the bag, and they did not last long. 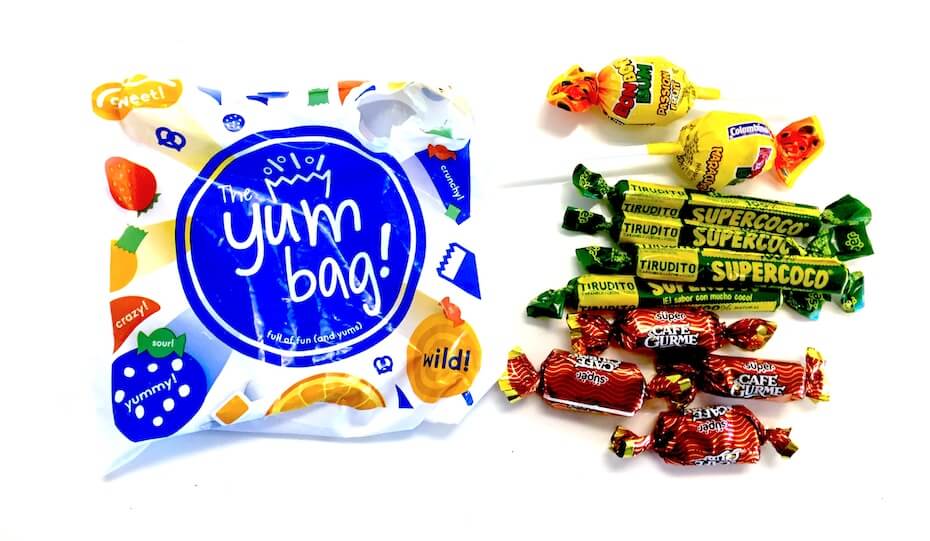 There's no doubt that Universal Yums will expose you to exciting snacks from around the world, and chances are, you'll like most, if not all, of the treats in every box. Opening up the box is kind of like opening presents on your birthday, and you never know quite what you'll find inside.

However, it won't be for everyone, due to the price. Even the smallest box at the least expensive rate costs $13.75 per month, while the box with the most to offer starts at $35.75 per box, so it won't be in everyone's budget. If that price seems worth it to you, I recommend trying it at least once to broaden your taste horizons a bit.

The only other downside is I'm now in love with a bunch of snacks and have no simple way to get my hands on them again. Maybe a trip to Colombia is in order.

Need something to wash down those snacks? HERE to learn more about Sips By, the subscription box for tea-lovers.