Love Jerky, But Don't Love All of the Sugar and Preservatives? Try Vacadillos Carne Seca

From a young age, I've been kind of obsessed with beef jerky. In the third grade, I actually asked for a food dehydrator for Christmas, just because I was enamored with the idea of making my own jerky at home.

Cut to today, and it's still one of my go-to treats, especially when it comes to road trips or I'm feeling like a meaty treat and don't want to cook anything (or eat cold cuts out of the fridge). I know that it's not the best for me, and can sometimes be overloaded with sugar, sodium and nitrates, but I love the taste. Of course, I'm always on the lookout for tasty alternatives.

Enter Vacadillos.  The carne seca brand has set out to be a healthy, tasty jerky alternative, and they reached out to me asking if I'd be interested in trying them myself. Of course I was, and here's everything I'd since discovered about the brand and their wonderful flavors.

Vacadillos specializes in carne seca, which translates to "dry meat." Their offerings are deliciously seasoned with traditional flavors and spices before being air-dried for 10 to 21 days and then sliced into thin strips. Carne seca is a popular food throughout Latin American, and especially in Northern Mexico, enjoyed as a snack and even used in cooking.

Vacadillos' carne seca is made in the U.S. with absolutely no gluten, MSG, nitrates, sugar, artificial flavors or preservatives while packing 15 grams of protein. It's available in 2 oz. bags in both Chile Lime and Habanero flavors, and sells in two-packs for $9.98, or six-packs for $29.99.

I'd never had carne seca before, and was pretty curious about how it would stack up to classic jerkies. When I opened the bag, I knew I'd enjoy them from smell alone, with the scent of the spices coming through in full force.

The strips were thinner than typical bagged jerky, and when I bit in I found that they had a  tender texture, with just the right balance between softness and bite. The flavor was also wonderful, with a light orange and lime citrus, accented by chili heat and garlic. At first, I didn't find it all that spicy, but the heat built in my throat as I ate it, which eventually dictated how much I wanted to eat. Good thing there are two servings per container, and it comes in a resealable bag, so you can put it away to enjoy the rest later.

In comparison to jerky, I thought it was just as good, without all of the bad stuff, and especially tasty if you're someone who enjoys spice. 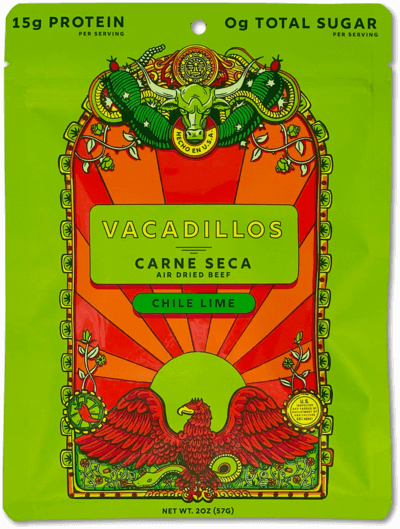 Next up, it was time to try the Habanero flavor. Scent-wise, it had a pretty similar profile to the Chile Lime, but when I bit into the strips, with that great texture, it also had a citrus tang, but the heat felt different. It was a more rounded jalapeño heat that snuck up on me as I chewed, building up even faster than the Chile Lime had. Again, it was absolutely delicious, and even better than standard jerkies, though it's definitely for those who can stand some heat—though I'm sure there are some who'd love it to be even spicier. 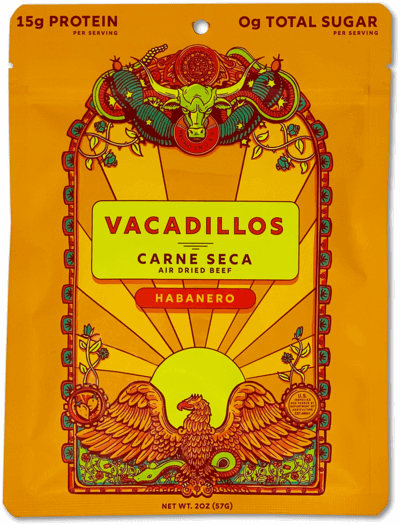 If you're a jerky lover who loves a bit of kick in their meat snacks, I can't see any reason you would love the taste of Vacadillos carne seca. It's tender and packed with flavor and spice while leaving out all of the sugar, preservatives and other junk that's common in jerky. However, that quality comes at a cost, and it is a bit pricier. They don't really have an offering for those who don't love spicy food, but maybe that's something they'll remedy in the future. Regardless, I'm a huge fan, and it's definitely a brand I'd love to see more from in the future.

How about jerky without the beef? Click HERE to read all about Pan's mushroom jerky.