Valerie Ding on Girls In STEM!

16-year-old Valerie Ding loves quantum physics and playing the piano. Her scientific prowess across two different fields of science helped her to think about solar cells in a way that no scientist had done before. 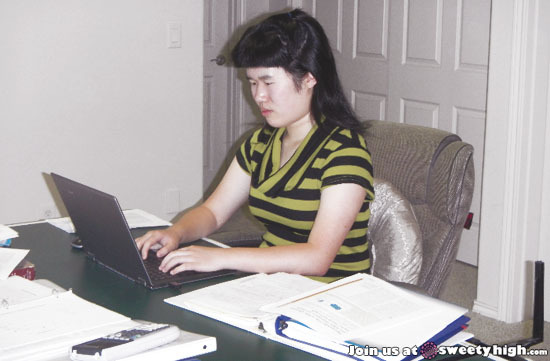 On August 23rd, Valerie will be giving an interview at GoogleScienceFair.com at 3 p.m. PST. Watch it live here and send in your questions for Valerie!

In this third and final chapter in a series of interviews with Valerie Ding, Valerie discusses a recent trip to the country's capitol, and what it means to be a girl in science.

Valerie Ding was one among the six finalists and past winners of the Google Science Fair who were invited to represent the fair at an recent event in Washington D.C.

Together, they held a conference with Congress and the House of Representatives about what can be done to make girls more interested in science, technology, engineering and math, or STEM, fields

"I really appreciate the fact that the government and powerful women are behind young people and girls taking their chance in the science fields," Valerie said.

But why is there such a disparity between the number of men and women in STEM? Valerie said that one factor preventing girls from going into those fields is stereotypes.

"Girls often think about science and think of it as nerdy and geeky," Valerie said. "They don't want to identify with it, but there are so many wonderful females in technology companies are are so well-rounded. They're so nice and not nerdy at all."

She said that recently there has been a lot of discussion about why there are so few females in science fields. Just hearing about this division might make some girls think science is not for them.

"I think that there is a bit of a case to be made about the fact that people make a big deal of it, to the point where it's almost a barrier," Valerie said. "They basically think that if you're a girl going into science, you're going to be one of the only women there."

Valerie stresses the fact that there are actually a number of powerful women in science. She said that involvement by women adds more perspective, which helps solve problems.

"I think women have characteristics that help with communication," she explained. "I think we have a different way of getting our point across than some men. I have read articles about women being detail-oriented and men being big-picture oriented."

Valerie Ding is a big fan of Sheryl Sandberg, COO of Facebook and writer of Lean In, a book that encourages women to go after their career goals.

"Sheryl Sandberg is a big advocate of females in tech and engineering," Valerie said. "I remember watching her TED Talk. She talked about how women have to take on the role of taking care of children. They have to find the balance between a career and family life more than men need to do."

However, Valerie believes we're on the right track to having a society where women are equal to men.

"I'm expecting to see it level out, inevitably," she said. "Women are not inferior. Young girls don't encounter family obligations as much, today. They can go to university in science and wait to have kids and be perfectly successful. It's their decision."

She said that among young women, a bigger challenge is overcoming stereotypes.

"I think the biggest barrier arises from the media and movies," Valerie said. "When I was little and envisioned mathematicians, I thought of someone covering entire classrooms with incoherent formulas only they understood. It was totally foreign to me."

TV shows and films rarely portray math, science, and research in a way that makes it seem accessible, Valerie said.

"There isn't that much discussion about math and science," Valerie said. "When it comes up, it's 'Math is so hard. I hate math class. I hate school.' Math is one of the most-bashed courses."

Instead, Valerie believes that early on, kids should be encouraged to try things out and make mistakes. Math might look tough, but eventually a lot of kids find out they have a talent for math and embrace it. They should also try out other fields, Valerie said.

"It doesn't have to be science, or STEM," she said. "Find what field you have a longing and passion for and want to be good at. That's something that inspires people. It really motivates you when you're good at something. It tends to mean you have an intuition or a feel for it."

Valerie believes that everyone has that one thing they excel at. She just happened to find hers in science.

"Forget about societal ideas and stereotypes," Valerie said. "Find a teacher, or someone you can look up to, someone you admire in the field you want to be in. When you're young have have choices. Look into it, read books. Use the resources available to you to learn whatever you can."

Valerie is particularly excited about a new program sending women in cool careers to schools around the U.S. to teach kids about how they became astronauts or physicists.

"Those women started as a kid interested in science, space, chemistry, and they found those topics really interesting," she said. "Right now, it's predominately white men making scientific discoveries, but it doesn't matter what race or gender you are. If you want to pursue what you really love, the first step is school."

If you're interested in Valerie's Google Science Fair project, be sure to check it out here! View each of the entries, and don't forget to vote for your favorite!