Valerie Ding is a 16-year-old from Oregon with some big ideas. She is currently a finalist in the Google Science Fair with a revolutionary idea that will enhance the efficiency of solar cells! 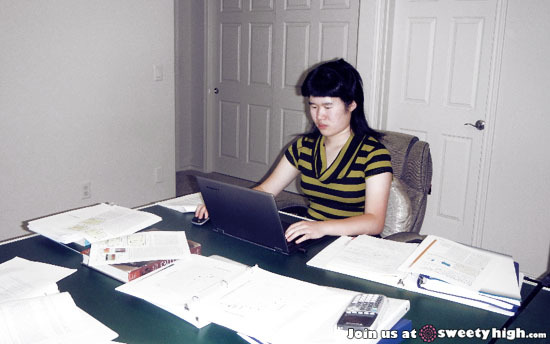 The algorithm she developed uses complex quantum physics. Before she was a quantum physicist, however, she started as a young student with a love for math.

"When I was really young I had an intuitive interest and tendency toward mathematics," Valerie said.

Even from a very early age, teachers recognized her potential and supported her to take on more difficult math classes. When she hit middle school, her science teacher let her know that her math skills would also be a useful resource in science fields.

"Physics is one of the fields most involved with math," Valerie said. "I had the same intuition with physics, and that was a big motivation."

She also developed an interest in environmental science.

"There's a lot of media attention to energy and the crisis we have right now with diminishing natural resources, like fossil fuels," Valerie said. "They also cause pollution, which impacts environmental health.

This realization made her realize how important it was to focus on renewable energies. Renewable energy comes from sources that are basically unlimited, including sunlight, wind, and waves.

She spent years working with different types of renewable energy. In middle school, she experimented with hydrogen fuel cells and light-emitting diodes to conserve energy.

In the 6th grade, Valerie was placed in a gifted and talented math class, where the other students also had a real knack for mathematics.

"It was a nice, encouraging community," Valerie said. "They are very involved not just in math and science, but also music. The most important thing is access to resources, and a school and teachers who support you."

Even in her advanced classes, she was ahead of the game. Yet again, teachers noticed her potential and suggested she try an ever tougher curriculum.

She said she was initially intimidated by quantum physics, and it discouraged her at first. Later, the difficulty is what drove Valerie to love quantum physics.

"I finally encountered something I didn't really understand," she said. "Even state-of-the-art researchers really don't get it right now. That's the point of the research."

To learn more about quantum physics, she asked a professor at Portland State University if she could observe quantum computing and physics classes. She also checked out books from quantum physics from the library.

"There are actually a lot of books on quantum physics for teens and preteens," Valerie said. "They're not demeaning like the "For Dummies" books. We all have to start somewhere."

Eventually, Valerie managed to combine her interests in quantum physics and renewable energies in the entry she made for the Google Science Fair. That combination came in the form of quantum dot, or QD, solar cells.

"Quantum dots are tiny closers of little particles, like atom balls, and all together on a solar cell they can absorb light really well," Valerie explained.

These quantum dots are theoretically twice as efficient as the solar cells we typically see on roofs today. Those panels are 15% efficient on average. Currently the QD solar cells are at 7% efficiency, but in theory have efficiency up to 66%.

"I think what makes my experience unique is the fact that I combined two different interests of mine," Valerie said. "I used was the quantum physics, which i had this interesting urge to pursue, and applied it to conserving energy."

For her project for the Google Science Fair, Valerie used a combination of mathematics and quantum physics and plugged a lot of numbers into formulas she devised with a computer to make up a new and more effective algorithm for researchers to speed up the process of figuring out the most efficient QD solar cells.

"My process is a way to quickly identify the best way to optimize quantum dots, and to find the better ones," she said.

Valerie did a lot of research to see if anyone had already done what she planned to do. They hadn't.

"It's really surreal being at that stage, when something you're doing that hasn't been looked at before," Valerie said. "I realized that there's a fundamental divide, it's that there are experimentalists looking at solar cells, and theoreticians working on the quantum side of things, but no connection between the two."

Valerie explained that human beings emit more than 30 billion tons of carbon dioxide into the air every year.

"Clean air is something we need to work toward," she said. "Ultimately what my research does is it helps speed up the research for the new and enticing promise of QD solar cells. I think it could blow up, and I'm trying to help it do that."

Best of all, it utilizes one of the most bountiful forms of natural energy.

"It's a way to harvest the energy of the sun, which is basically infinite," Valerie said. "We are already using it for solar cells, but we can make it much more efficient."

The Google Science Fair finals, in which the winner will be announced, are in September. Until then, Valerie is working on polishing her entry.

"It's not all about the competition, but the fair itself" Valerie explained. "It consists of talents from around the world, and being able to go to Google headquarters this September is so inspiring. It's amazing I've made it this far, and it's definitely more of a celebration than a competition."

The voting for the Google Science Fair is now live! Check out the entrants and their awesome submissions and vote for your favorite here!