The Definitive Ranking of The Most Popular Vegan Ice Creams

Walking down the frozen aisle in any grocery store, you're bound to see rows and rows of non-dairy ice cream options.

There are incredibly inventive non-dairy flavors, pints, ice cream sandwiches and bars. Vegan alternatives are becoming mainstream as more people adopt plant-based diets. They're also an excellent option for people with lactose intolerance or a dairy allergy, or people who just want to be kinder to the earth. A few years ago, it wasn't easy to find a non-dairy ice cream that tasted like the real thing. Now the problem with vegan ice cream is that there are too many good options!

Deciding which brand you want to try next is almost impossible, so we've made a definite ranking of eight of the most popular vegan ice creams to help you with the decision process.

The "light" ice cream brand Halo Top came out with a vegan line of ice cream, made with a coconut-milk base, in 2017. The flavors they offer are Birthday Cake, Candy Bar, Chocolate, Chocolate Chip Cookie, Peanut Butter Cup, Sea Salt Caramel and Chocolate Almond Crunch. It has a lighter consistency and flavor due to the lack of fat, so Halo Top is not the best ice cream if you're craving a rich flavor and creamy regular ice cream texture. Halo Top uses sugar alcohol and fiber in all their ice creams, which reduces the calories, but it can also be harsh on your stomach. Although Halo Top advertises that you can eat an entire pint for 280 calories, you probably shouldn't if you have a sensitive stomach. Vegan Halo Top is a good option for a lighter treat, but it's not as satisfying as the other ice creams on this list. 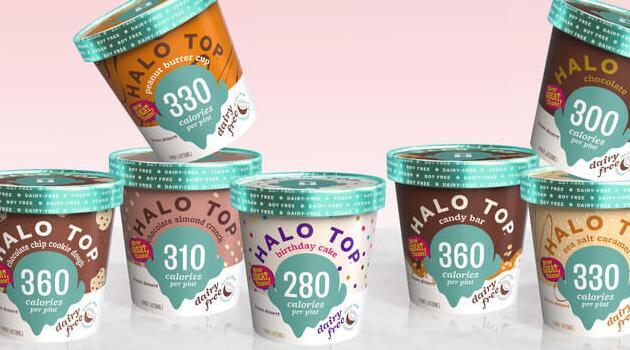 You've probably heard of the Swedish brand Oatly! They made a name for themselves with their creamy oat-milks, but now they've expanded their products to Oatgurt and Oat-ly Frozen Dessert. Their flavors are Chocolate Chip, Mint Chip, Coffee, Strawberry, Chocolate, Vanilla, Oat and Salted Caramel. The best part of Oatly ice cream is the smooth and silky texture from the oat-milk base. The flavor options aren't very inventive or exciting, but their ice cream line is still relatively new. They have time to create new and more exciting flavors. The main problem with Oatly is that you can taste the oats. This is a plus for people who love oatmeal, but it may be offputting for people who don't like the taste. We do have to give credit to Oatly because oat milk is the most sustainable non-dairy milk, according to BBC. It is also incredibly nutritious. 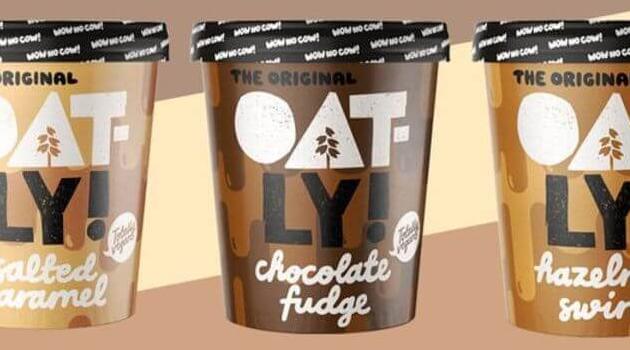 Coconut Bliss is certified vegan, gluten-free, non-GMO and delicious. The coconut-milk base creates a velvety texture that provides the same richness you would find in regular ice cream. They have an extensive list of flavors for their pints like Golden Banana Brownie Swirl, Chocolate Walnut Brownie, Chocolate Chip Cookie Dough and Sweet Cherry Amaretto. Coconut Bliss also produces ice cream bars and ice cream sandwiches. This brand's only potential problems are that the coconut base does come through most of the flavors, and that many consumers are allergic to coconut. Some people think it's too coconut-y, so avoid this brand if that's not your favorite flavor. Coconut Bliss is another exceptional company to support as it environmentally friendly and supports women's empowerment. Coconut Bliss collaborates with the Water, Agroforestry, Nutrition and Development (WAND) Foundation. They aim to help women and their families by assisting their small businesses. Coconut fans and ethical-consumers can unite in supporting this brand. 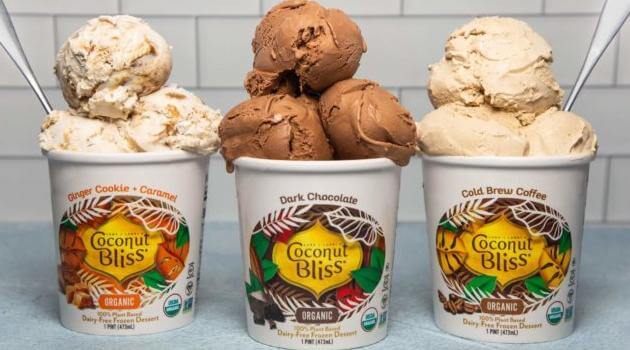 NadaMoo! is an established and beloved non-dairy ice cream in the vegan community. They've been around a long time since they released their non-dairy ice cream in 2005. NadaMoo! evolved a lot over the years with an extensive list of inventive flavors and eco-friendly practices. NadaMoo!'s incredible flavors include Pistachio Nut, Strawberry Cheesecake, Marshmellow Stardust, Rockiest-Road and Maple Pecan. They also have Peppermint Bark as a seasonal flavor. NadaMoo! is made with coconut milk, so it has the other coconut-based ice creams' soft and creamy texture. Again, the only downfall would be that the coconut taste is noticeable in some flavors, which would be a problem for the coconut anti-fans. Nada-Moo! gets bonus points for being non-GMO, vegan, gluten-free, USDA certified organic and fair-trade certified. 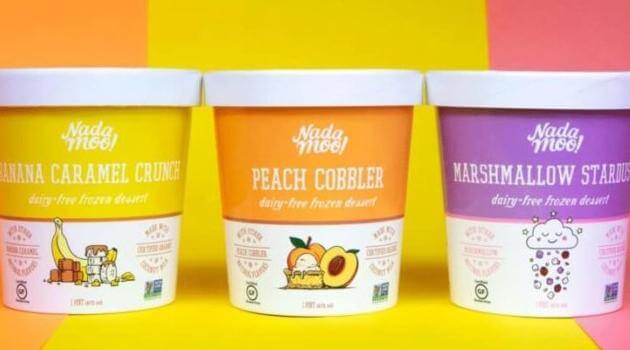 Häagen-Dazs is well-known for its decadence, and their non-dairy line is no different. Their vegan line has luxurious flavors like Peanut Butter Chocolate Fudge, Chocolate Salted Fudge and Truffle. Häagen-Dazs non-dairy ice creams stand out because they have an exceptionally thick texture that is rich and smooth. Häagen Daz doesn't use plant-based milk as a base for their non-dairy line, which is the secret to the cream-like feel. Each flavor has a customized base made with core ingredients like peanut butter, chocolate and coconut cream. These dense pints will remind you of the classic Häagen-Dazs ice cream. It's indulgent, smooth and oh-so-satisfying. 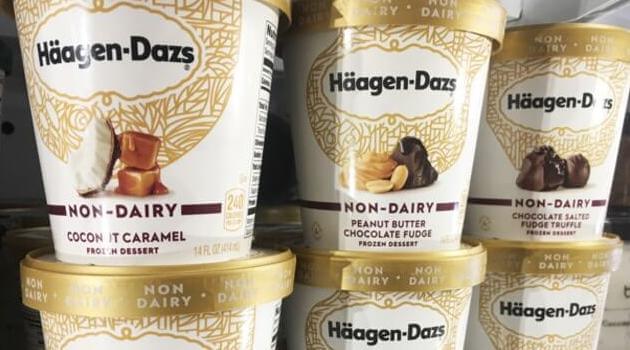 We couldn't make an ice cream ranking without our two favorite men, Ben and Jerry! Ben & Jerry's is a fan favorite and they're sure to win over more people with their dairy-free ice creams. Almond-milk and sunflower butter are the two different bases they use for their non-dairy ice creams. Ben & Jerry's fills their classic velvety ice cream texture with tasty add-ins like caramel swirls, fudge pieces, Oreo chunks and peanut butter. Ben & Jerry's non-dairy line has classics like Cherry Garcia and Cinnamon Buns. They also have newer flavors exclusive to their vegan ice creams like Coconut Seven-Layer Bar and P.B. & Cookies. You won't be able to tell the difference between the vegan Ben & Jerry's and the real stuff! 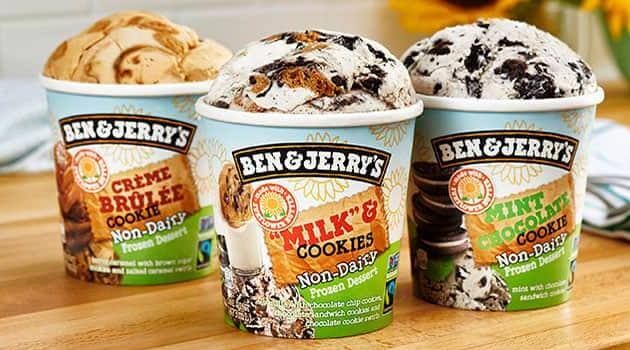 Coolhaus' website claims they have "the creamiest, most unique ice cream," and they've lived up to that claim with their non-dairy line. They use a unique base of peas, brown rice and cocoa butter to make their dense and smooth dairy-free ice cream. The mouthwatering vegan flavors are Best of Both Worlds Vanilla, Chocolate Sandwich Cookie Crumb, Dirty Mint Chip, Mocha Marcona Almond Fudge, Cookie Dough Lyfe, Salted Caramel Crunch and Peanut Butter Fudge Chip. They also make ice cream sandwiches with thick cookies and a generous amount of non-dairy ice cream big enough to share with a friend. However, if you want something just for yourself, you can try one of their single-serve dairy-free mini cups. It's a women-led business that uses high-quality ingredients and is an earth-friendly, sustainable company. What more could you want? 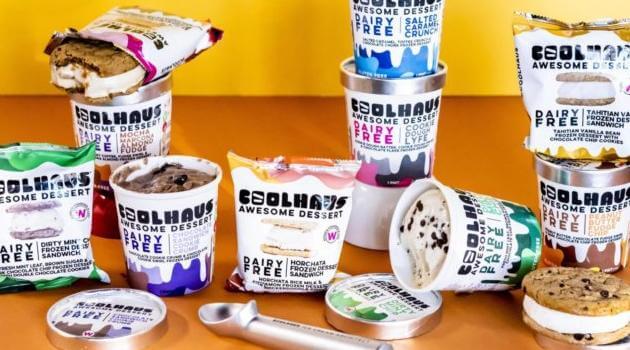 So Delicious Frozen Dessert wins the number one place on this list and in our hearts. So Delicious is probably one of the most well-known vegan companies. They make plant-based milk, yogurt, and ice-cream. What makes So Delicious unique is the diversity and quality of their products. They have five different ice creams with different bases, which are cashew, almond, coconut, oat and soy. Between all the bases, they have flavors like Snickerdoodle, Caramel Cluster, Peachy Maple Pecan, Chocolate PB Swirl, Toasted Coconut Key Lime, Mocha Almond Fudge and Gluten-Free Cookie Dough. So Delicious ice cream is creamy and packed with additions like chunks of chocolate cookie dough or caramel clusters. We love the cashew-milk line the best because it's the most like real ice cream, but you can't go wrong with any pint. They also have ice cream sandwiches and bars. Even people who refuse to try non-dairy ice cream will fall in love with this brand once they try a spoonful. 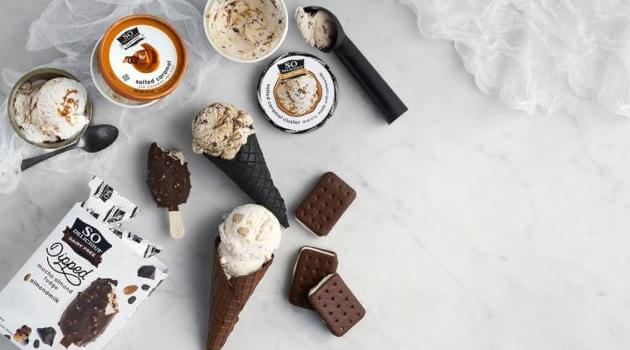 Are you craving something sweet after reading about ice cream? Here are 8 easy Tik Tok dessert recipes you can make right now to satisfy your sweet tooth.