I'm obsessed with food, and over the last few years, I've really found myself venturing more into plant-based, gluten-free options, while incorporating chicken and occasionally beef. I almost always avoid dairy, and my intake of processed ingredients is also minimal.

I believe it's true when they say that food is the fuel we put into our bodies, so much like a car, if it's the crappy kind of fuel, we're not going to run as effectively. I don't like the way I feel when I eat poorly. Since changing my eating habits, I've found myself in a generally happier disposition around the clock, and I have much more energy and motivation.

That said, you can imagine my excitement when a rep for VitaBowl's pre-made meals reached out about reviewing the brand's vegan, gluten-free chef sampler, created by three-time Michelin-starred chef, Dominique Crenn. Keep reading for my honest thoughts on the collection of world-inspired meals. 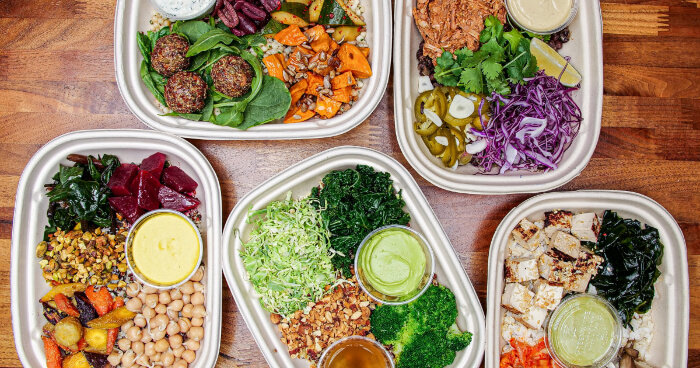 Korean Macrobiotic Bowl: Chock-full of enoki mushrooms, seaweed, sprouted tofu, kimchi and brown rice, this protein-packed powerhouse is every bit flavorful as it is nutritious. While its dallae tofu sauce was a satisfying addition, it didn't make or break the dish for me. And while I'm usually not big on tofu cubes, the preparation in this case made it easy on the tastebuds, melting in my mouth.

The Korean Bowl, this bowl is macrobiotic and focused on chemical free food. It includes a balanced diet of sea vegetables, fermented foods, beans or legumes, leafy greens and unprocessed whole grains. Our sprouted brown rice allows nutrients to be better absorbed as well as digested. The wakame maitake mushrooms, sprouted tofu and kimchi all combine to make a protein-dense, nutritional powerhouse bowl which is topped with delicious iron-riched dallae tofu sauce!

Cali Rejuvenating Mood Booster Bowl:  I'm fond of the quinoa, shaved Brussel sprouts, broccoli and kale that are featured in this lite bite, but as a full meal? I would have liked a protein of some sort to top it off. I did get excited, however, about the avocado crema, but it seemed to have soured by the time I dove in, two days after receiving my delivery. I think if you add in some of your own flavor or other addition of sorts, a nice meal can be found here—but eaten as is, this was my least favorite of the five.

Latin Balance Bowl: Ah, and now for my favorite batch of the bunch. This bowl had everything I feel necessary to complete the perfect meal. The jalapeños added the perfect kick of spice, the black beans were an excellent source of protein, the red cabbage provided much-needed crunch, and wow, I was absolutely blown away by the jackfruit, which tasted just like flavored shredded chicken. Jackfruit is hard to crack. Its natural form doesn't have much taste, so to cook it well is obviously a talent, and one that's mastered here exceptionally. And as an added bonus, the chipotle cashew crema was absolutely divine. Five stars from me!

Our Latin Bowl! This bowl contains a little bit of everything to nourish your body. Vitamins, fiber, antioxidants and delicious traditional Latin flavors. It's also entirely grain free, for those looking for a different bowl base. Our main ingredient of green jack fruit is rich in antioxidants and contains some of almost every vitamin and mineral needed by the human body making it a true superfood!

India Anti-Inflammatory Bowl: I'm a huge fan of Indian foods and spices, so you can imagine my excitement when I had this bowl in front of me. While the combo of tricolor quinoa, heirloom carrots, beet pickled turnips, pistachios, mint and garbanzo beans melded together nicely, it was really the coconut curry sauce that completed the dish.

Our Indian Bowl, designed not only to nourish you on a cellular level but also reduce inflammation in the body. With anti inflammatory tumeric curry and fresh moringa (one of the most nutrient dense foods on earth) this bowl will help you fight inflammation and feel great. By taking the time to sprout our chickpeas we make the protein more absorbable and easier to digest so you convert them into energy quicker!

Mediterranean Gut Health Bowl: Much like Indian, Mediterranean foods and spices frequent my kitchen. This combination of Israeli pearl couscous, sprouted lentil and flaxseed falafel, sweet potato, spiced cucumber and plant-based Tzatziki (which tasted exactly like the real thing) was divine and flavorful. I absolutely despise olives, so I could have done without them on my plate, but they were super easy to dispose of, so no complaints there.

The meals don't require any additional preparation, so they're ready to go as is. I opted to put the majority in the microwave, but that's just me. All in all, I found them flavorful and nutritious. There were a couple of instances in which I probably would have enjoyed it with an additional protein, but I was very much in favor of not feeling bloating or lethargic after finishing my meal. And naturally, I felt validated eating meals curated by a Michelin-starred chef.

If you live by a plant-based or gluten-free eating regimen, or you're a big proponent of nutrition, this is an excellent option. At $12.99 each or $58 for all five, this is less costly than a few runs to Sweetgreen, for example. That said, if you're aiming for a low carb or low cal meal, these are higher in those areas, so I'd steer clear. Also, if you're used to eating heavy meals like fast food items, pizza or creamy, dairy-rich dishes, these will probably be a shock to your system. All of that said, it can't hurt to try at least one to see how you feel. It saves you the hassle of meal prep. As mentioned above, if I had to choose one to test, I'd go with the Latin bowl.

For more plant-based goodness, read our interview with the founder of THESE satisfyingly sweet, vegan cookies.