In all my years tasting and reviewing different types of chocolate from all over the world, I've never encountered a brand quite like Vosges Haut-Chocolat.

Vosges specializes in all kinds of chocolate, from truffles and elixirs to chocolate bars and chocolate wellness items, and they even offer custom zodiac truffles for each sign. Their approach to the beloved treat is one of intentionality, which is what immediately drew me to the brand when they reached out to Sweety High—and I supposed there must be a good reason they were voted one of the "10 Best Chocolatiers in the World" by National Geographic.

I had no idea what I was getting myself into when I agreed to try out a few of their offerings, but after digging into them, I was so glad that I did.

Vosges (pronounced "vohzh") is all about offering gourmet and exotic chocolates as a means of spreading ideas and culture. Founded by chocolatier Katrina Markoff, who trained at Paris's Le Cordon Bleu, Vosges Chocolates are crafted to be an interaction with the world at large, as well as a sharing of energy, intentionality and love.

These flavors are inspired by powerful and energetic ingredients, as well as Katrina's globetrotting, to create chocolate that's an experience, rather than something that just tastes good. While they have a number of unusual products on offer, I was sent their Exotic Truffle Collection, Cacao Elixirs and Library of Mini Exotic Chocolate Bars to sample.

When I received a bundle of incredible-looking chocolates from Vosges, I set my sights on the nine-piece Exotic Truffle Collection first. I pretty much had to, as these are the only truffles I'd ever seen that asked that I consume them within 14 days of shipment. I also had to refrigerate them, and thaw them for about two hours before consuming. At first, I thought this was kind of a hassle, but I soon discovered this actually added to the enjoyment of the experience.

This set of nine unique truffles was inspired by chef Katrina Markoff's travels all around the world, and therefore includes unique ingredients and flavors from all over. It also comes with an extensive 22-page book with a tasting guide, notes on the origin of each truffle and how to best enjoy them. That gave me plenty of time to learn all about each truffle before digging in. I also took in a lot of interesting info here, like the suggestion to touch, smell, see and breathe in each truffle, as well as taste it, and the explanation that each chocolate had been infused with a 528 hz "love vibration" sound frequency.

I truly found that having to wait for each truffle enhanced the sensory experience. Not only did I go in with knowledge about each truffle, but I wanted to taste the unique flavors in each one—and the delay made each of them that much sweeter. 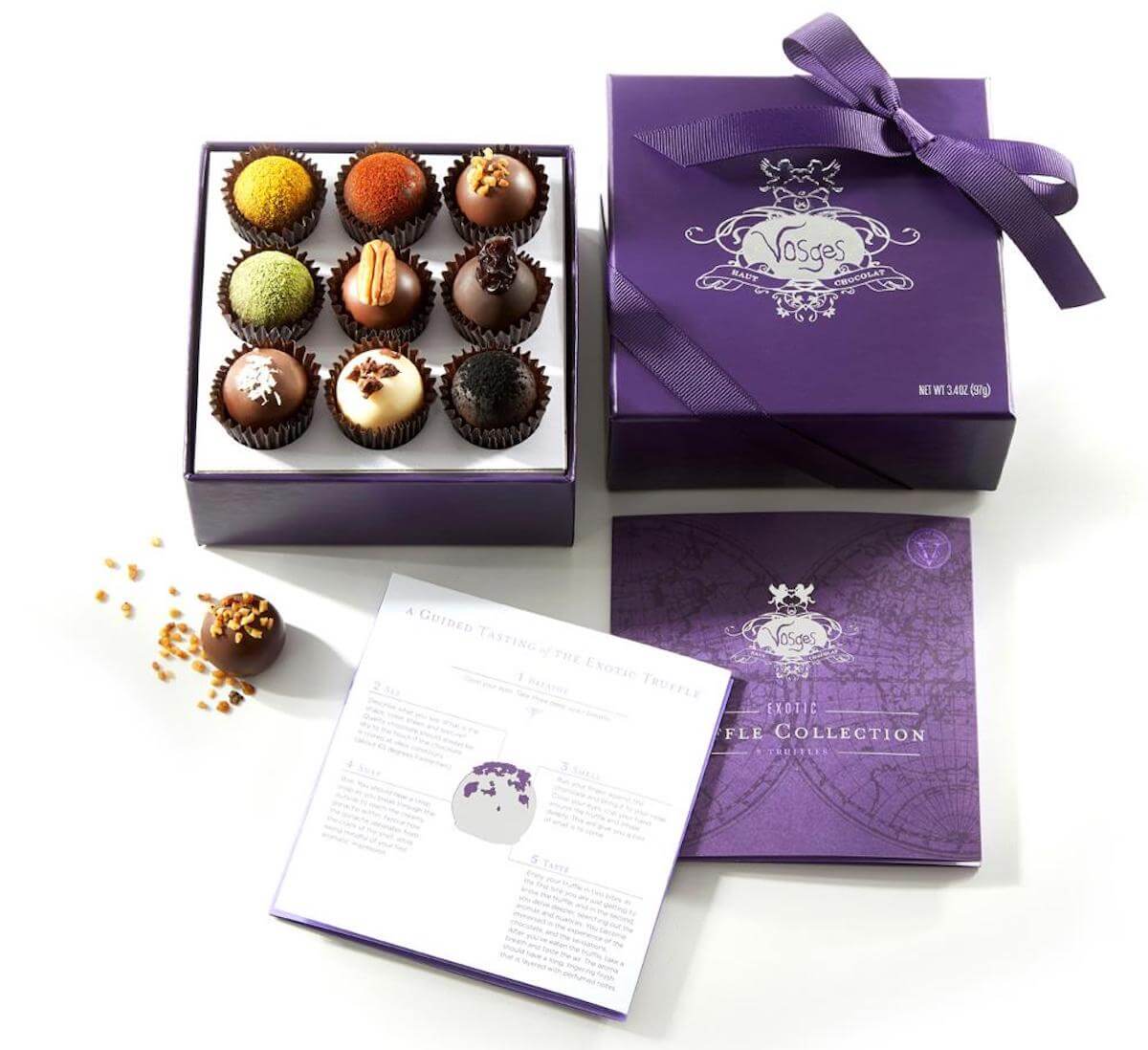 While the Naga truffle was sweet, salty and spicy on the outside, its center had a strong curried chocolate flavor. The Budapest truffle was coated in earthy, sweet and hot paprika, and was dark without being too sweet or bitter, dissolving slowly on my tongue. Then there was the hazelnutty Gianduia, which had a Nutella-like essence, but with a more mellow and complex taste.

The Black Pearl truffle, containing Fijian ginger and fresh wasabi, had a bitter outside thanks to its matcha coating, and a subtle gingery kick when I bit inside, while the Wink of the Rabbit truffle was topped with a single pecan and filled with gooey, slightly bitter, burnt caramel. Then there was the cherry-tinged Chef Pascal chocolate, topped with a vibrantly tart cherry.

The macadamia nut and Sri Lankan coconut-packed Woolloomooloo truffle was like a really sophisticated, ultra-delicious Almond Joy. The white chocolate Olio d'Oliva was flavored with Tuscan Bolivia oil, giving it a savory finish, and a little salt thanks to chunks of green olive in the chocolate. And lastly, the Absinthe truffle had a black licorice flavor thanks to Chinese star anise and fennel. Overall, this set truly does take the taste buds all around the world, with every flavor being a winner.

Vosges isn't just in the fancy truffle game. They're also invested in capturing its adaptogenic qualities. Their elixirs are designed to use cacao in its purest form to provide the healthy fats in cocoa butter, antioxidant-rich polyphenols and theobromine, which is said to provide a natural energy boost without a crash later. Cacao is also supposed to be good for digestion, circulation and focus.

This set contains six different delicious and powerful dome-shaped bombes with their own unique properties. The resulting elixirs are designed to be consumed in place of a morning coffee, delivering a burst of vitality without the caffeine, as well as a mix of other adaptogens, spices and flowers, depending on which elixir you're consuming.

Each one is crafted to be mixed into 10 oz. of heated milk (whether that's dairy, nut or oat) or water and whisked vigorously while saying a prayer and making a wish before it is poured with intention into your cup. While you sip to health and manifesting your dreams, your beliefs are meant to make them reality. The included booklet even contains a whole cacao elixir ritual, for those inclined to follow it. 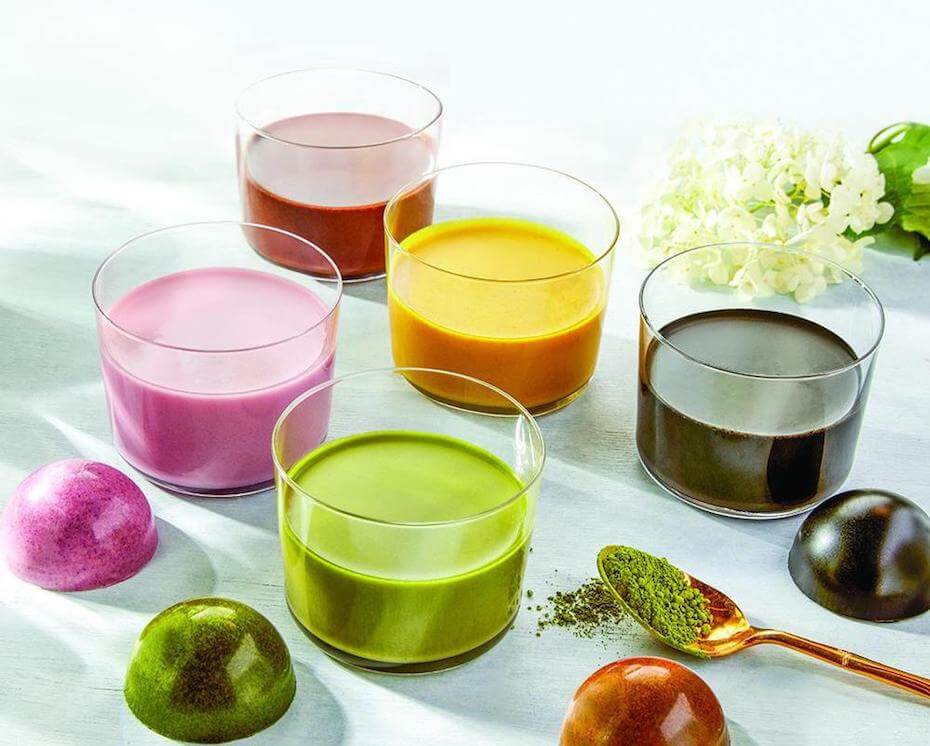 I basically went in order with these elixirs, starting with the Golden Milk elixir, including turmeric, black pepper, ceylon, cinnamon, cardamom and chili. Because of the strength of this bombe, it was actually recommended that I double that amount of milk used—which got a little complicated given that I don't have any large mugs. However, a glass measuring cup eventually did the trick as I infused the elixir with the simple intention of having a joyful, focused and productive day. The resulting drink was a vibrant yellow color with a light chocolate taste that was mostly rich with the musky, almost curry-like flavor of turmeric, with a hint of peppery spice. Besides the infrequent cup of decaf, I don't drink coffee, but this gave me exactly the boost I'd been looking for. I will, however, advise drinkers to be careful, and avoid wearing white because turmeric stains.

With the next elixir, Ceremonial Cacao, I was expecting a pretty traditional hot chocolate, so I was surprised by the results. Here, the chocolatey flavor was pretty subdued and gentle, and it wasn't very sweet. Instead, the cinnamon and cayenne flavors really came through, giving it a mellow Mexican hot chocolate taste. Again, my intentions were tied to focus, and I found this one did the job well.

Funnily enough, the Reishi Mushroom and Walnut bomb was more like a classic cocoa. The flavor was dark, but not too sweet, and it was packed with tiny chunks of walnut. I don't even like walnut, but the nutty flavor they added here was delicious. The Ceremonial Matcha was less bitter than I'd expected, with an earthy flavor mostly accentuated with the essence of cocoa butter. The Lavender, Lemon and Maqui Berry was similar, reminding me of white chocolate, minus the sweetness and really allowing the lavender fragrance to shine through.

Lastly, I tried the Forest Berry in 10 oz. of water. The tart berry flavor wasn't my favorite of the bunch, and I got the impression that had I used any kind of milk, it would have curdled. But even though the flavor didn't entirely appeal to me, I had this one after a terrible night's sleep and felt exhausted, and I was shocked at how much it immediately perked me up. Maybe it was all in my head, but these worked, and the intentional ceremony around them got me in a great headspace for tackling my day.

Vosges' Library of Mini Exotic Chocolate Bars was definitely the most traditional of the three products I was sent, but it was just as delicious as the others. It consists of nine half-ounce chocolate bars in a sampling of six unique Vosges flavors. These flavors are approachable as well as exotic, so that anyone can enjoy them. 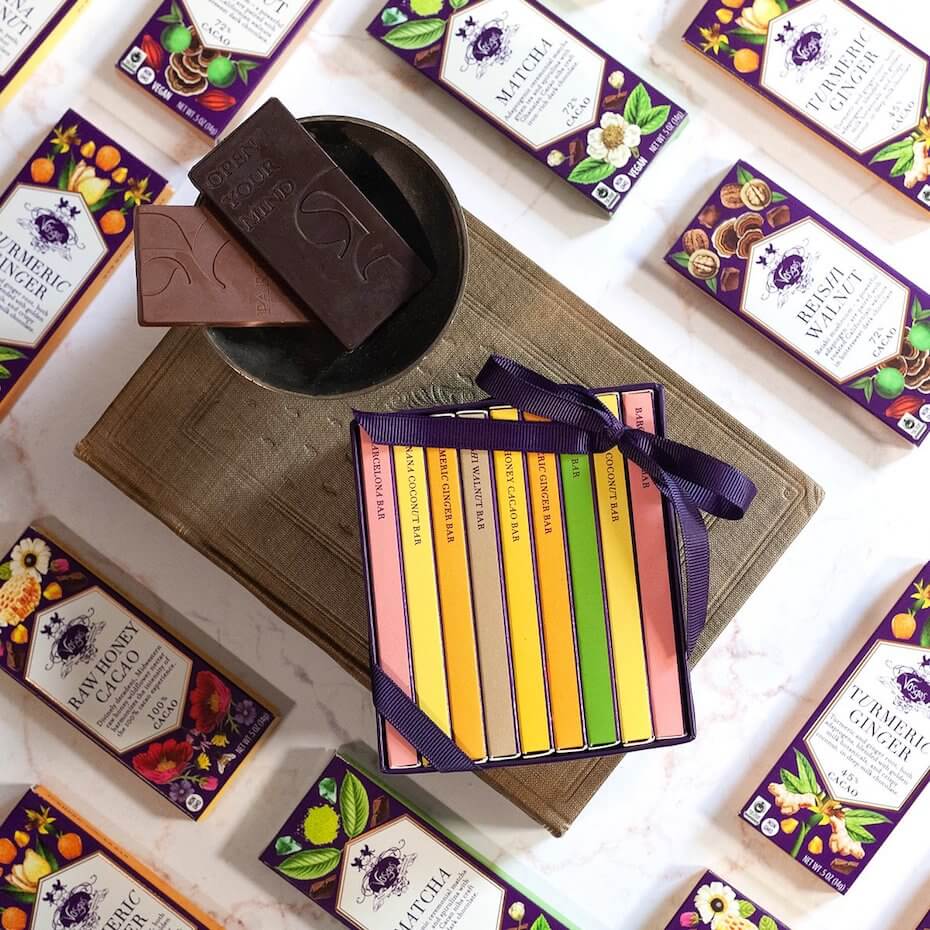 This includes two of the deliciously salty Barcelona bars, two tropically flavored Banana Coconut bars full of crunchy coconut bits and two bright and sweet Turmeric Ginger bars. The single bars are the very dark, but not overly bitter 100% cacao Raw Honey Cacao bar, the rich, nutty and salty Reishi Walnut bar and the dark, grassy and nutty Matcha bar. Each one is delicious in its own way, and if you end up loving a certain flavor, you can buy full-sized bars from Vosges, too.

Vosges does chocolate unlike anyone else—but it does come at a price. These premium, gourmet and exotic chocolates are a bit more expensive than your standard fare because they are unique and stand out from the crowd. However, their amazing taste and quality warrant the price point, as long as it's within your budget. The intentionality of the brand will make you rethink chocolate, and their elixirs really work. These are a delightful splurge for a special gift or for treating yourself, and probably aren't going to become your go-to, once-a-day chocolate fix.