Qi'ra From Solo: A Star Wars Story Should Get Her Own Movie—and Here's Why

Solo: A Star Wars Story is a criminally underrated movie.

Its low box office numbers (for a Star Wars movie, at least) turned it into a punchline, but mostly for people who haven't actually seen the movie. I'm equally guilty of this—and didn't get around to seeing the movie until Disney's publicity team sent me a copy—but with the DVD out now, all I ask is that you actually watch the movie before you joke about it, because I think you might be in for a big surprise.

I was skeptical of it, too. I've always been a geeky kid, and Harrison Ford was my one of my big celebrity crushes in elementary school. In second grade, I kept all of my school assignments in a folder with Han Solo's face on the cover, so I know what it's like to be attached to an actor prepared to be underwhelmed by anyone hired to replace them.

The new Han Solo, Alden Ehrenreich, does a fine job. He's great, but it's impossible to replicate the charisma and swagger of the original. Thankfully, he's also surrounded by some pretty stellar supporting characters that flesh out the story, and along with some great new designs of aliens, droids and planets, make it feel like a real Star Wars flick.

Among those new characters is Emilia Clarke as Qi'ra, who begins the story as Han's love interest but becomes a lot more over the course of the film. She's a scrappy survivor who can adapt to and thrive in any situation she encounters. Where Han tends to be lucky, Qi'ra is actually skilled, and arguably the more capable of the two characters. 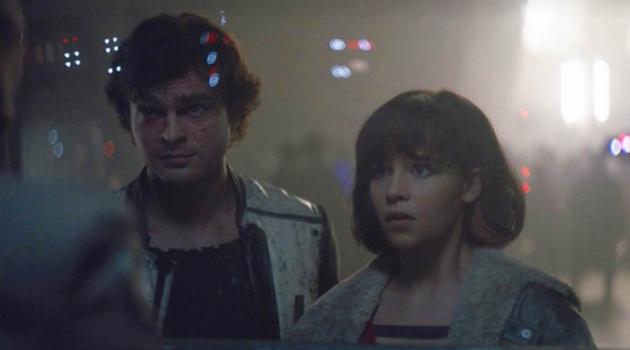 While it's incredibly unlikely to happen at this point seeing how Solo performed, I believe a movie about Qi'ra could stand alone as an incredible Star Wars film. Here's why—and some spoilers lie ahead, so if you haven't seen Solo yet, go rent it or something because it's fun and you'll probably like it.

We first meet Qi'ra on Corellia, the planet where she and Han grew up. The two are a couple, as well as partners in crime, with ambitions of leaving their dreary homeworld and journeying across the galaxy. They're both skilled thieves, but where Han makes it out of tough binds with brute force and charm, she solves problems with cleverness. In a deleted scene, the two only escape from a pursuing pack of Corellian Hounds when she suggests they hide in a disgusting barrel of eels, throwing off the creatures' strong sense of smell.

As the two finally make their escape from Corellia, she voices her concerns about leaving for the first time. Though her life there has been anything but pleasant, she feels protected there. Among her biggest fears is being sold to Crimson Dawn, a crime syndicate with a violent reputation. It's not long before the two are separated, and though Han makes it out, Qi'ra gets stuck on Corellia. From there, his actions are driven entirely by the desire to return home and rescue her.

Three years later, Han is still working toward getting his own ship so he can get back to Qi'ra on Corellia. A series of events leads him to befriend Chewbacca and team up with thief called Tobias Beckett. This inevitably brings him to a Crimson Dawn luxury ship, where Qi'ra happens to be working.

Their reunion is joyous, but for Qi'ra, it's also bittersweet. She's now free from Corellia, but the dynamic has shifted entirely. In exchange for safe passage from Corellia, she has become indebted to the ruthless Crimson Dawn leader, Dryden Vos. Under his guidance, she quickly rose in rank, becoming particularly cunning. She's an adept diplomat and a skilled fighter, and Vos fully trusts her with his life. Han is just happy to see her again and doesn't dig any deeper. 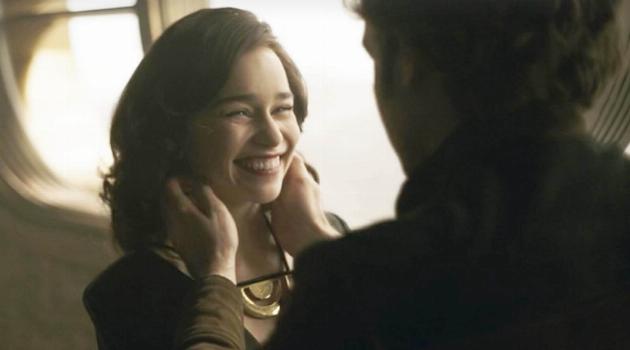 It's here that Qi'ra starts contemplating where her loyalty truly lies. She's always loved Han, and never stopped dreaming about what their lives touring the galaxy could be like. On the other hand, she's attached to one of the deadliest and most influential crime bosses in the galaxy. That connection certainly comes with its benefits—though betraying him could easily cost her life.

That job requires her to be the best, and she's certainly risen to the occasion. She's a great communicator, stepping in when Vos' temper gets fiery to hash out the details and find a real solution. When Vos is ready to kill Han and Beckett, her negotiation tactics give them another opportunity to rectify things with him. She can play the part, never breaking character, when she has to pretend to be someone else for a big con, and she also has some great contacts. After all, she's the one who introduced Han and Lando (as well as the Millenium Falcon) in the first place. 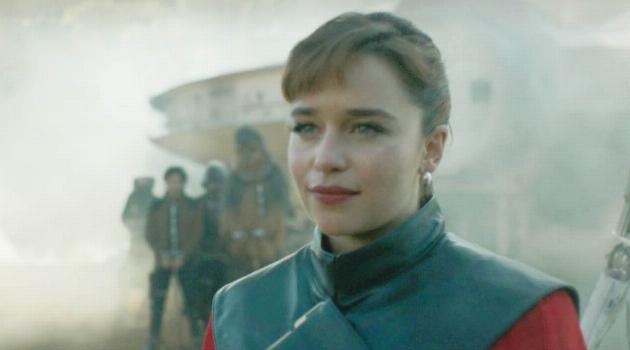 In fact, there's only one point in the movie when she isn't super skilled at something, and that's piloting a ship. Of course, Qi'ra isn't afraid to admit when she's at a loss. She's happy to step aside and let Chewie do the copiloting, knowing when her skills were better needed elsewhere.

After living her entire life on the streets, she manages to adapt to a luxurious lifestyle with ease, taking those street smarts and turning them into valuable tools for her elevated life of crime. When things don't go according to plan, she's quick on her feet and has the improvisational savvy to make things work. While she does prefer a peaceful solution, she isn't afraid to get her hands dirty when the situation calls for it, and she always knows how to exploit an opponent's weakness. It seems she can fit whatever role is thrown at her, and do it better than whoever did it before her. I also firmly believe that in a one-on-one fight, she'd easily take out Han. 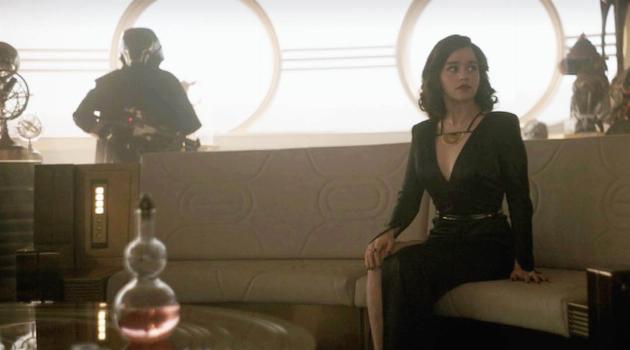 She simply isn't the person she was when Han left, and though she might consider what their future could be together, she doesn't see it as a viable option. Vos would certainly kill them both if she were to leave, and Han would never understand the things she's done and who she's become. Han might think he's a hardened criminal, but she knows better. Though we never find out precisely what crimes she's committed, we understand that Crimson Dawn is notorious and she's only gotten where she is because she's willing to stoop to that level, too.

Toward the end of the movie, Vos discovers that Qi'ra has double-crossed him by lying about the stolen goods that have been brought to him. He asks her what she'd do if the person she trusted most betrayed her.

She replies, "I would ask that person to prove their loyalty by sacrificing something they love."

In the moment, she's telling Vos that the only way to make things right with him is to get rid of Han, but I think she's revealing so much more than that. Her words also hint at her future betrayal of Han. In the end, she actually kills Vos, potentially risking the life she's built as part of Crimson Dawn. Though she partially sees it as a prison, she also knows she's never been more powerful or important than she is as part of the syndicate. That would be a true sacrifice, too. 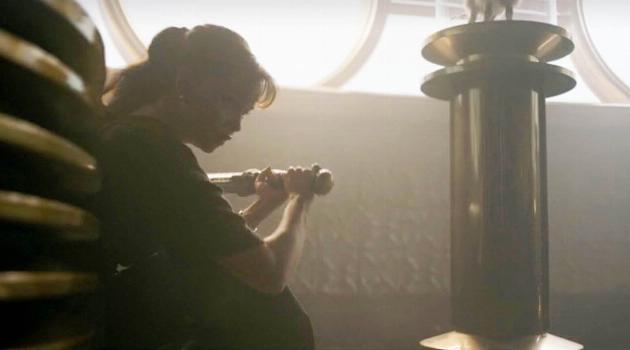 After Vos is dead, she has Han run off and rescue Chewie, promising to follow closely behind with valuable gems in tow. Really, she's making sure that Han will be looked after, because she can't join him. Almost immediately, she uses Dyden Vos' demise as a chance for a promotion, pleding her loyalty to the true boss of Crimson Dawn, Darth Maul.

If you haven't seen animated Clone Wars or Rebels shows, you probably didn't even know he was still alive, but his reintroduction in a film means there' a chance we'll be seeing more of him in the future. Maul promises that he and Qi'ra will be working closely together closely in the future—so could we see that as a movie, pretty please?

Qi'ra fascinates me because she operates in a grey area. Though her loyalties and friendships lie with the good guys, she lusts for power and isn't above doing wicked things to get it. She never stops believing in Han, but the two view the world so differently that it could never work out between them.

It's doubtful that her story would intersect with Han's again, but I'd love to see more of this capable, clever and somewhat sinister woman again on the big screen. The Darth Maul tease is just too good to ignore. Plus, were she a Force user, I have no doubt they'd be exploring her story further as she straddled the line between the light side and the dark side. Qi'ra may have been just a supporting character in an underearning movie, but she has so much potential that I'd hate to see squandered.

If you also loved Solo, click HERE for quotes from the movie that make excellent Instagram captions.