Wonder Boy: The Dragon's Trap Is the Retro Game Remake You Didn't Know You Needed

They just don't make games like Wonder Boy III: The Dragon's Trap anymore—but that doesn't mean you can't relive its magic in the all-new HD remake.

The Metroidvania-style platformer originally released on the Sega Master System back in 1989, but this remastered version is available now for PlayStation 4, Xbox One and the Nintendo Switch (with a PC version arriving in June), making it more accessible than ever.

Also, having never played the original, this was an all-new experience for me. Even though the game has a retro feel and play style, it was nice not to have nostalgia coloring my enjoyment of the game. 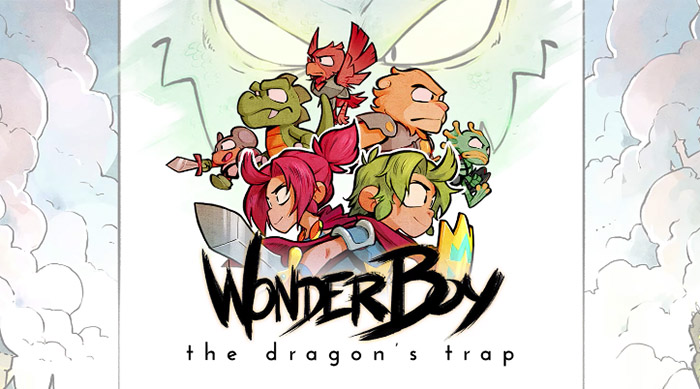 I'll start by saying there's a little feature I really appreciated in this game, even though it doesn't change much. While the game is generally called Wonder Boy: The Dragon's Trap, it also lets you play a version of the game called Wonder Girl (which I eagerly did).

In this version, you start the game as a red-haired female protagonist, rather than the original game's green-haired boy. Even though you lose your human form within the first few minutes of the game, it's a nice little touch that meant a lot to me. 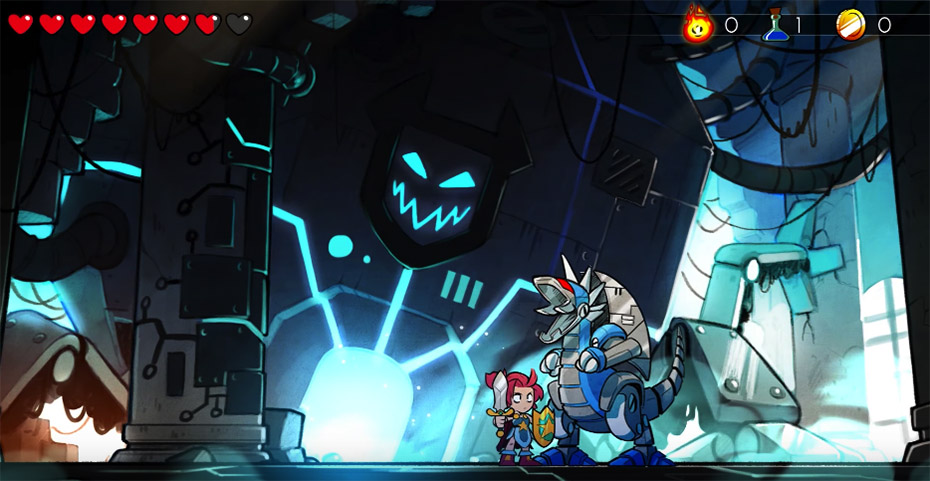 The game's premise is pretty simple. You begin the game as a human warrior with the goal of taking out the Meka Dragon. You do (easily, in fact), but in its defeat, the dragon curses the player, turning them into a fire-breathing half-lizard, half-human being. It's up to you to restore your character to their fully human form, but to get there you'll have to traverse through treacherous lands and take on more mutated forms, including a block-climbing mouse, a swimming piranha, a powerful sword-swinging lion and a flying hawk.

From the very beginning, players see why becoming a lizard is such a curse. Wonder Boy: The Dragon's Curse is the kind of game that starts the player totally beefed up and ready to take anything on, only to strip the player of those abilities. In the beginning of the game, you need to be hit multiple times before even a fraction of your eight hearts disappear. But after defeating the Meka Dragon and escaping the crumbling castle, you lose your high health, strong accessories and your charisma is taken away from you. It's up to you to earn them all back. 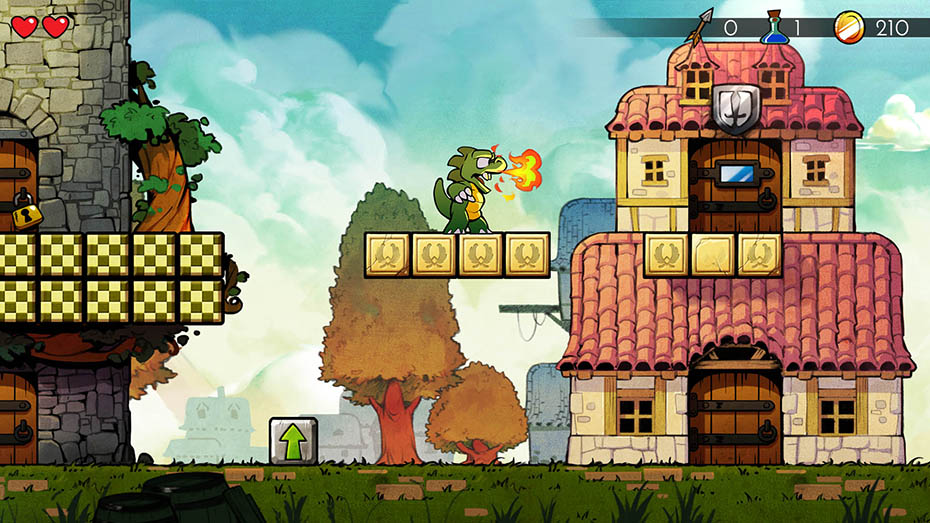 This isn't a massive game by any means. If you knew exactly what you were doing, you could probably defeat the whole thing within a couple of hours. But without any experience of the game, it took me many more hours to figure the game out and uncover its secrets.

The world of The Dragon's Trap is actually quite open. What stops players from progressing immediately to the end is the limits of each of the main character's transformations. It's a game about exploring, reaching dead ends and backtracking to those areas once you've unlocked the correct upgrades to make it through. 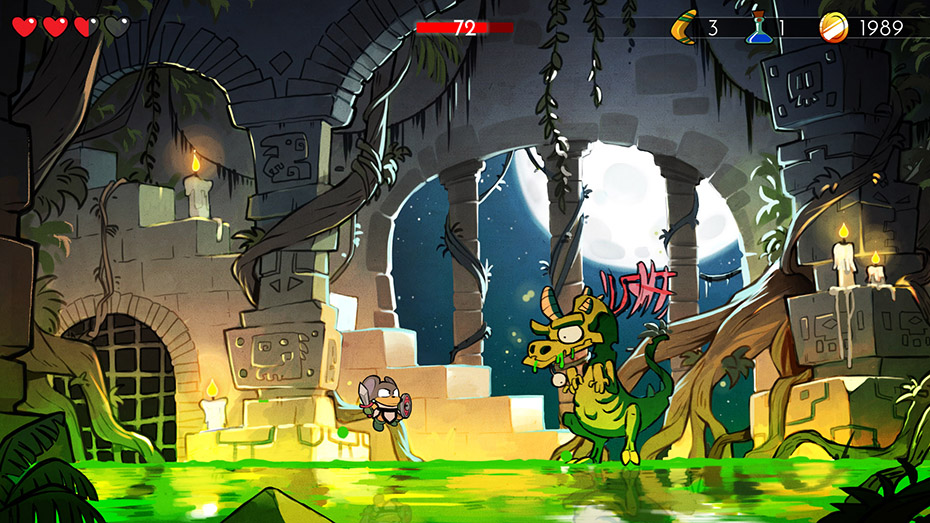 See some unscalable checkered platforms? You'll be able to climb them once you turn into a mouse. Struggling with a water area? The piranha's ability to move seamlessly through water will get you through. Special rooms also allow you to swap between your animal counterparts, so you can return to the needed form to continue on with your mission.

If you're anything like me, your journey will also be delayed by frequent character deaths. This game is hard, and a lot of it is trial and error. It took me way too long, for example, to find out characters with shields can block projectile attacks just by facing toward them. And since the controls copy directly from the original, they can feel a little bit slippery at first. Once you get used to them (and how your character recoils when hit by an enemy) you'll make more progress more quickly. 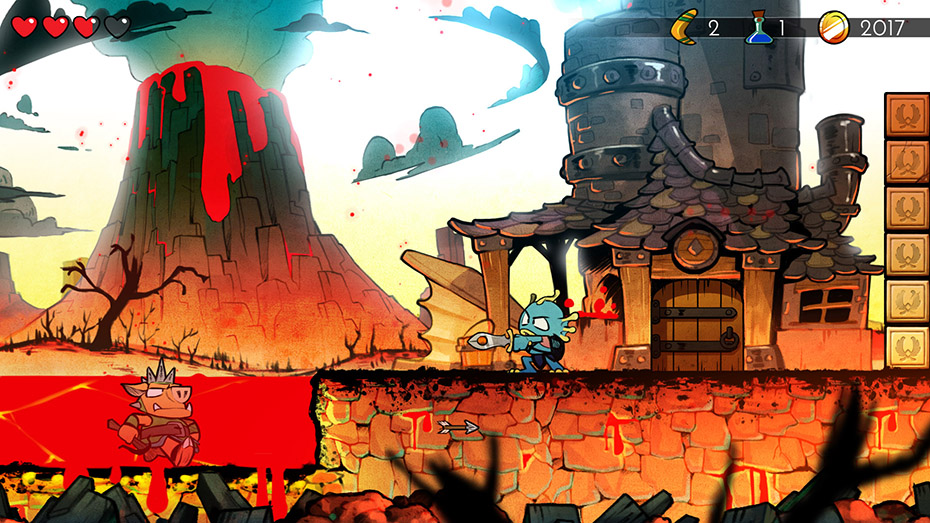 Lucky for players, bad guys tend to drop goodies once you've defeated them. Some will give you handy weapons to use to defeat other enemies, some drop hearts to refill your health and others drop gold. You'll want to stock up on a lot of gold, because you'll need it to buy better weapons and armor, as well as health upgrades. Your current mutation and the items you're holding also affect your charisma, and higher charisma unlocks more buyable items.

The game's bosses can be tricky as well. Each of them are dragons absolutely loaded with health, and you'll have to whack them in their only weak point, the head, to deal damage. This is especially hard when the dragons throw tons of weapons at you and move quickly across the screen, but with practice you'll make it through. 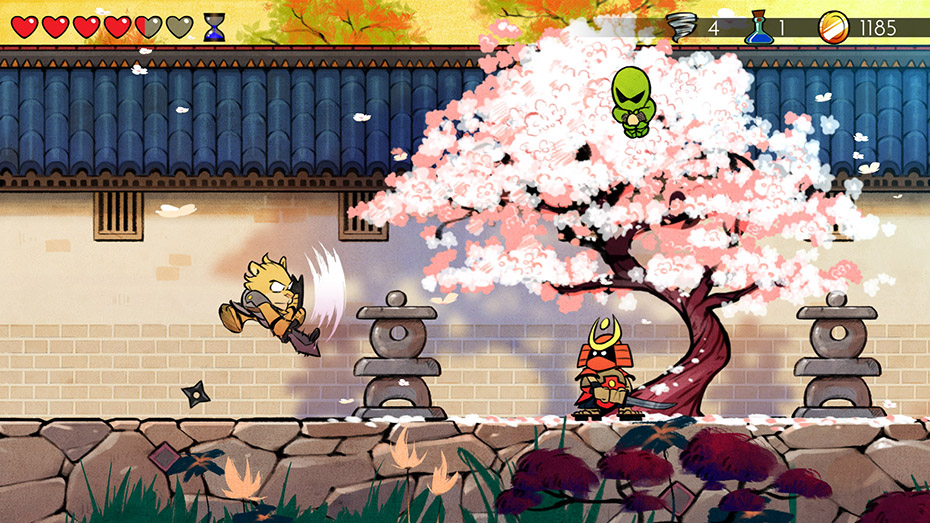 Of course, this isn't an exact copy of the original Dragon's Trap game. This version brings the game into the 21st century with luscious hand-drawn animation, reimagined character and background designs and a totally updated soundtrack. It's a far cry from the original pixelated imagery and 8-bit graphics showcased in the game more than 25 years ago.

But if you love retro aesthetics and low-fidelity sound effects and music, you can toggle them on and off whenever you feel like it. Maybe it's just me, but I even felt that the game was easier in the old school pixel mode. I actually recommend swapping between the new hi-res version and the old 8-bit one at least once in each area (and with each mutation) to see and hear the differences between the two. While the old Dragon's Trap holds up surprisingly well, the backgrounds aren't very dynamic and it's wonderful to see how they were interpreted and brought to life in the remake.

And on the off chance that you're one of the few folks who actually played the original back in the day, there's even a place in the new Dragon's Trap to type in your old save codes and load your progress from the '80s. 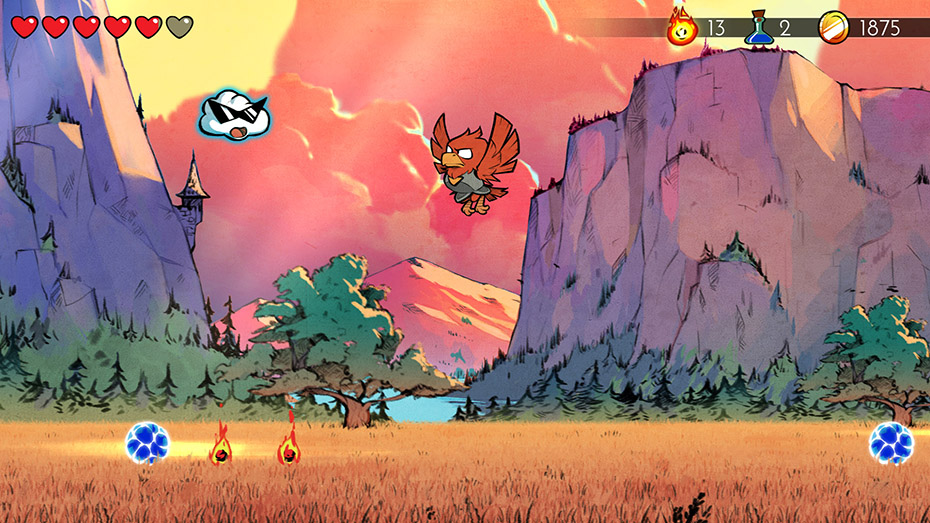 Overall, Wonder Boy: The Dragon's Trap was a ton of fun, even if I think the high difficulty will deter more casual players. Never having played the original, I felt that there were probably some secrets I was missing out on making the game tougher than it had to be.

If you love classic video games that make you think, retread old ground, and then think some more to figure out what to do next, you're going to fall hard for this new take on an old classic. If retro gaming and problem solving aren't your thing, you may want to give this one a pass.

Looking for another difficult but rewarding challenge? Click HERE to read our review of Snake Pass.