If you don't already know about Hailey Knox, then you are SERIOUSLY missing out!

The crazy-talented YouTuber, musician and YouNow broadcaster is on fire with her covers (you HAVE to hear her version of Justin Bieber's "Love Yourself," like RN), and her infectious, camera-ready personality makes us confident that she is going places FAST!

We were so incredibly thrilled that we recently got to chat with Hailey and find out everything from how she got her start, to what piece of advice she can offer other young singers wanting to get their break. And the best part? We got the inside scoop on her upcoming EP, which focuses on relationships, feeling out of place and – you know – other typical stuff we deal with?.

Trust us, you want this girl on your radar! 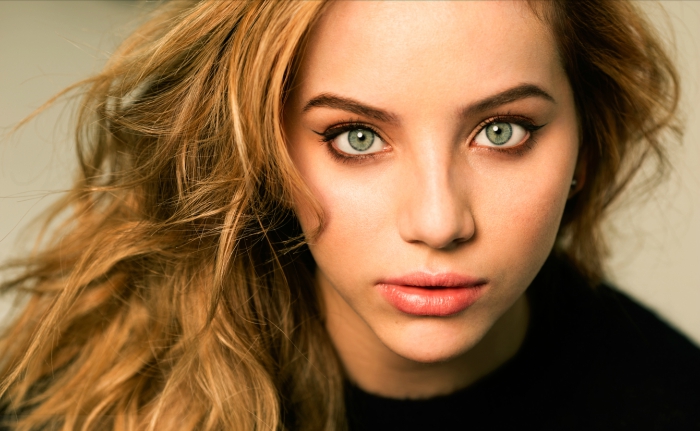 SH: So tell us, how did you get your big break?!

Hailey Knox: It's all been through posting videos! First I posted to YouTube and then YouNow.

SH: So when you first uploaded a video to YouTube, were you thinking anything? Did you expect it to go anywhere?

HK: No, I think I started with a few random videos on Facebook that my mom put up actually, and then kind of converted them over to YouTube. I definitely didn't have a lot of reaction from them in the beginning, but if you're consistent then I think it definitely helps.

SH: How did you start posting on YouNow? Did you discover it a certain way?

HK: A friend of mine told me about it. She saw somebody performing on there, another musician. There are so many cool people on it and I've made so many friends! It's awesome because we're able to meet up at things like VidCon. When I first tried it – of course – I had like two viewers from the very beginning. I was like, 'Ugh I don't know about this,' but it was super fun because it's basically like hanging out with a group of friends. It's amazing that you can play an original song and get your audience's feedback within seconds.

SH: Have you been writing songs for a long time, or when did this start?

HK: That's funny you ask that! My team and I are writing right now, actually. The past two years I've been writing with my producers and this artist Imani Coppola, and we've written a lot of cool, original material which will be on the EP that I'm releasing soon. I wrote a little when I was younger and I think my writing has developed by working with my producers and Imani.

SH: Has singing always been a passion of yours?

HK: Yes, I've been singing for a really long time. I have tapes of myself when I was two years old singing "Black Bird" by the Beatles and my dad jamming on guitar. It's pretty funny!

SH: We know you also play the guitar. When did you learn how to play?

HK: I started at seven years old. My dad taught me, which is pretty cool.

SH: That's amazing! Do you know how to play any other instruments?

HK: I play a little ukulele, a little piano and a little drums – but not anything crazy on the drums!

SH: Which artists do you personally look up to?

HK: There are a lot of artists who I love! I love James Bay and Justin Bieber. I think they're awesome, and Allen Stone. Tori Kelly is also awesome. I love that they each have a lot of soulfulness in their voice. Like Allen Stone for example. I also love Ed Sheeran because I loop and he's a huge inspiration when it comes to looping and songwriting. I saw him live and he's incredible!

SH: How in the world does a loop pedal work?!

HK: It's pretty much just a pedal with three tracks on it that allows you to harmonize with yourself. I create an overall track and perform with it live. In some of the YouTube videos, I've used it.

SH: Do you have any tips or tricks for other singers who want to do what you've done?

HK: Be as consistent as possible. Post whatever you love and however you like to do it, and just ignore the people who don't like it, I guess!

SH: Spill about your new EP! Do you have a favorite original that you've written for it?

HK: I think one of my favorites is "Worst Enemy," because it's a really personal one. It's about self-doubt and feeling like you're not good enough for yourself. It's kind of the most emotional one out of the five that are going to be on the EP, but it's still one of my favorites.

SH: Amazing! Can you tell us about any of the other songs that are going to be on the EP?

SH: Would you say you have a theme throughout your EP?

HK: All the songs have this theme of feeling out of place or just teenage struggles.

SH: When can we expect to see your awesome EP?

HK: It's going to be early June. I don't know the specific date, but early June!

Feeling inspired by this major YouTube talent? Us, too! Be prepared to be further inspired after you watch how this 12-year-old girl taught herself how to dance like a pro by watching YouTube videos HERE.