This T. Rex Skull Showerhead Looks Amazing—But Here's What Happened When I Tried It at Home

When I first stumbled upon an article about Zooheads, I'd never seen anything like them.

The Brooklyn-based company specializes in 3D-printed showerheads inspired by fearsome animals, and in addition to being boldly sculpted, they also come in some gorgeously vibrant colors.

It goes without saying that I was curious. Unable to find any in-depth reviews of Zooheads online, I reached out to the company, which was kind enough to send me one to test out myself.

Like I mentioned before, Zooheads is all about animal-shaped, 3D-printed showerheads. Currently, they come in 11 different varieties including gorillas, eagles, alligators and dolphins. Each one also comes in 20 colors, from black to white and everything in between—including a greenish glow-in-the-dark shade. 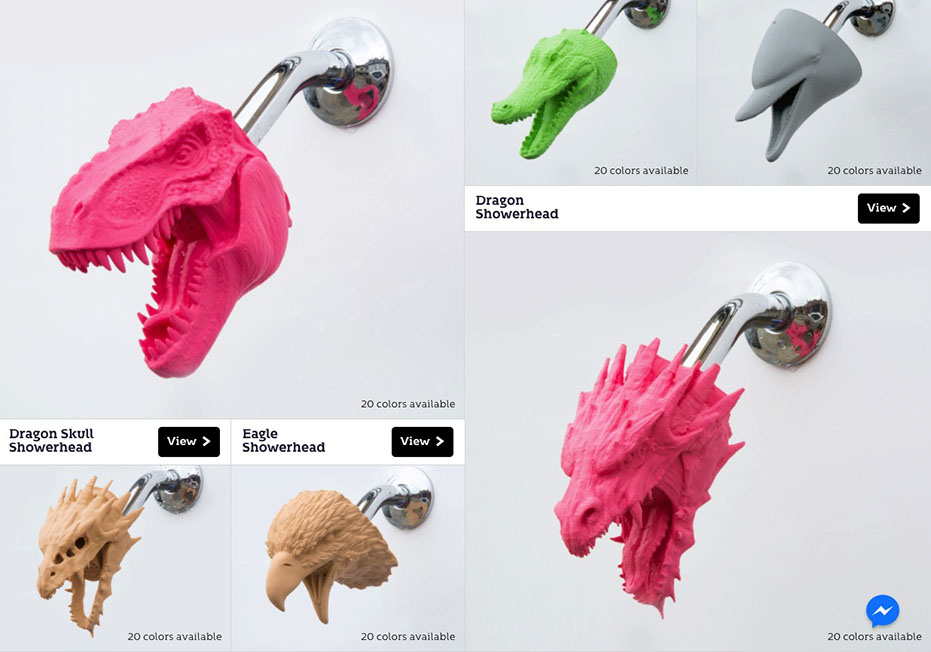 They're printed with a non-toxic, biodegradable plastic called PLA that comes from renewable crops, including corn and potato. This plastic won't bend or warp, even if the shower gets really hot, and the showerheads are made on demand, so nothing is printed if it's not ordered, which avoids waste. They're also designed to fit any standard U.S. shower fixture.

Most Zooheads cost $25, with free standard shipping, but the ultra-big elephant shower head retails for $44.95. I was sent an incredible-looking pink T. rex skull shower head.

When I first opened up the Zooheads box, I was thrilled with the way the T. rex skull looked. Besides the nodule in the center serving as the actual shower head, it looked super accurate and oozed with cool. For some reason, it was a little bit smaller than I envisioned, but anything larger would probably be gratuitous.

The package also included a swivel ball adapter, so I could move the showerhead a bit once it would be installed, plus a rubber washer and a rounded wheel that I later discovered was a roll of thread sealant tape. I was a little surprised to see that it didn't come with any instructions (and that I also couldn't find directions online) but I got to work in attempting to install my new showerhead. 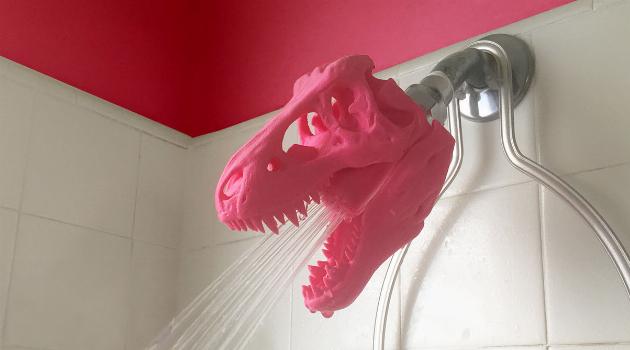 I'd never tried unscrewing my existing shower head before, and was relieved to discover it was super easy. All I had to do is put the new one on.

I started by trying to twist the metallic ball adapter into the back of the T. rex skull, which I found trickier than I expected. After a dozen or so attempts, the two finally connected. I then twisted the two pieces onto the open shower arm and screwed it on as tightly as I could. When I turned the shower on, a lot of water started spraying out the back of the showerhead. I turned it off and tried again.

After tinkering with things a bit, I tried inserting the additional washer into the ball adapter, and after discovering the sealant tape, I wrapped some of that around the threaded part of the shower arm. This time, the showerhead fit snugly and water only sprayed out the front when I turned on the shower.

When it came time to actually take a shower, I was surprised by the very strong water pressure. The spray was very concentrated and almost felt like a massage against my skin. 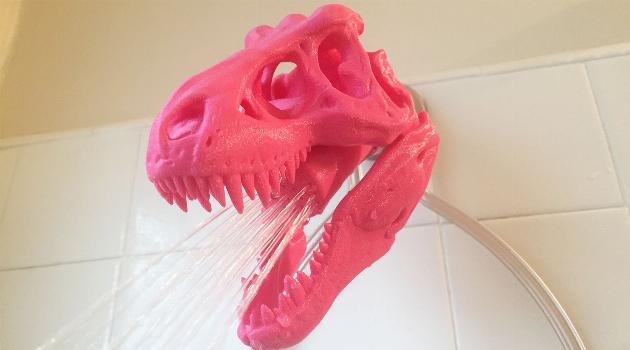 Although the spray was ultra relaxing, there were a couple of downsides to the high pressure. First, the water wasn't draining as quickly as it was coming out of the showerhead, so it started pooling around my feet. Second, the hot water started petering out in record time. My shower has a single lever that controls the water temperature, so there wasn't much I could do at this point.

I feel like I wound up using way too much water, so I don't plan on using it again tomorrow. But before I replace it with the old showerhead, I'll probably keep the T. rex skull installed so I can admire its beauty.

Zoohead's T. rex skull shower head looks incredible and does exactly what it sets out to do, but unfortunately, I probably won't be using it too often because it feels wasteful to use as much water as it does. Homes that have multiple knobs in the shower that control the amount of the water, as well as the temperature, might be able to work around this. 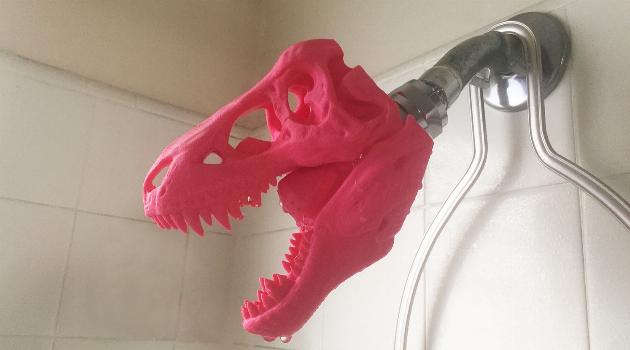 However, with a lot of fancy showerheads costing hundreds of dollars, and the more basic ones starting at about $30, it's hard to beat the cost of Zooheads. It could even be a novelty to break out on occasion, especially given its super easy installation (though Zooheads should probably include instructions in the future).

Even if I don't personally install it again in the shower any time soon, I do plan to keep it around as a lively bathroom decoration. It's just cool, okay?!

UPDATE: Since I received my Zoohead for review, the company has started including instructions with all of their showerheads. They're also looking into including a flow restrictor with every showerhead to avoid the excessive water usage I mentioned. They'll be sending me one, and I'm eager to see how that changes my experience.

If you love 3D dinosaurs, then click HERE to find out how we turned ourselves into 3D-printed superheroes.