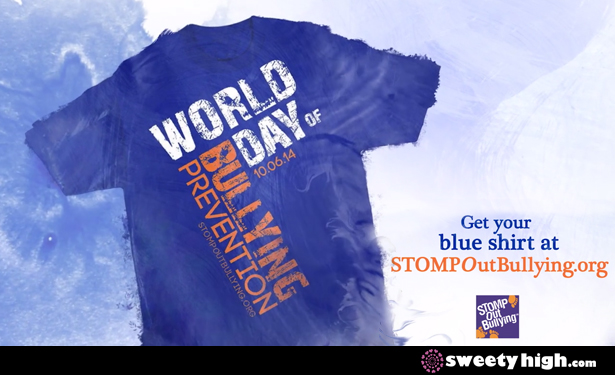 STOMP Out Bullying was founded in 2005 to tackle the issues of bullying and cyberbullying across the world. They start with education for tolerance and understanding, and against discrimination.

STOMP Out Bullying are the creators of Blue Shirt Day, an annual event which takes place October 6 this year. Learn more here! Wear blue October 6 to raise awareness about bullying and spread the word that bullying is not ok!

If you're passionate about the anti-bullying cause, you can take it even further by talking about the issue with people in your life or  creating an anti-bullying event.

Official 2014 STOMP Out Bullying t-shirts are available at Bon-Ton stores and at STOMPOutBullying.org. Marvel will also be releasing a series of awesome superhero comic covers that discuss bullying in collaboration with STOMP Out Bullying!

Celebrities are also asking fans to get involved with Blue Shirt Day this year, including Chloë Grace Moretz, Josh Gad, Abigail Breslin and Taylor Schilling. In the past, celebrity ambassadors have included Bella Thorne and more. In a series of videos, they discuss true stories of bullying in the real world and the negative impact bullying has had in their lives, and the lives of their friends and families.

How can you do your part? In addition to wearing blue on October 6, you can always speak up on behalf of the bullied. We should embrace our differences, compliment strangers, befriend new kids and never stand by when bullying is taking place.

If you're passionate about stomping out bullying, you can also join our anti-bullying community at Sweety High! You can also check out Disney's new Choose Kindness campaign!