Everything You Should Know About Lost in Space Star Ajay Friese

We know Ajay Friese best from his roles on Riverdale and Netflix's Lost in Space, but there is so much more than that to the rising actor.

Ajay has quite the resume, and is also a singer and guitarist who'll be releasing some incredible music later this year. If you're crushing on Ajay as hard as we are, keep reading to find out everything you've wanted to know about him. 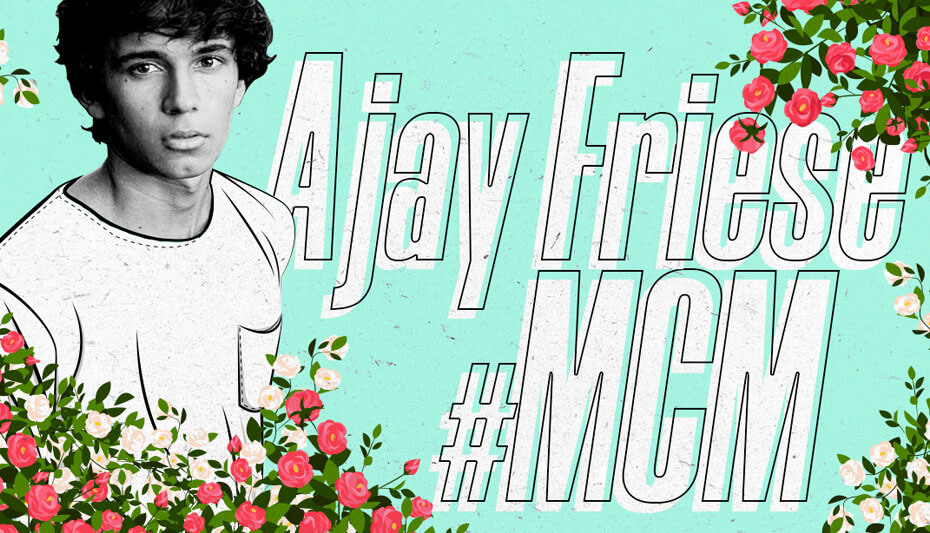 1. Ajay says the weirdest rumor he's ever heard about himself is that he eats salad with his bare hands, without dressing. Even weirder, he says its actually totally true.

2. He has a few favorite methods for unwinding after a tough day.

"Talking to my girlfriend on the phone always cheers me up and grounds me. Lately, I've been reading before bed. It chills out the chatter in my brain, and when I put down the book I'm out like a light! I love singing and playing songs on my guitar—I'm even coming out with an album in 2020!"

3. His favorite song of all time is "Elephant Gun" by Beirut.

"Just listen to those horns!"

4. Ajay seems to have bizarre luck when it comes to misplacing things.

"I always lose important things like wallets, passports, headphones, cameras and even guitars. Miraculously, I almost always get them back."

5. He's been skiing and snowboarding since he was a little kid.

"On most mountains, I can probably go down any run—or at least I think I can, until I'm stuck at the top of a cliff, taking my skis off to walk back in the other direction."

He says Moana has been an inspiration to him.

"She follows her heart and does what she feels must be done, even when her society is telling her otherwise."

7. He also loves the taste of fruit right after he brushes his teeth.

8. He's not afraid to reveal his emotional side.

"Any moment in a movie where people show real human connection or care tends to get me in my feels. When a character is passionate about something or someone, or when true friendship is being shown, that stuff always makes me tear up. And for some reason, I cry during every movie I watch on an airplane."

9. His favorite thing about himself is his optimism.

"I'm able to look at most situations, even the bad ones, and find a lesson in them—something positive to take away. It helps me learn from my own mistakes, appreciate and forgive people and situations I have been hurt by, and grow as a person. When life pushes you around, often it's trying to tell you something!"

If you love watching Ajay on Lost in Space, click HERE to discover your Netflix-watching personality, based on your zodiac sign.