I Visited a Reiki Healer to Try Her Aromatherapy Chakra Potions

After my very first Reiki session, I felt amazing, but I still didn't actually know much about the process or my chakras.

So when I learned that Amaloa Bonvecchio had a spiritual boutique in Hermosa Beach that focuses on healing chakra potions, it immediately piqued my interest. Amaloa is a Reiki master certified in aromatherapy as well as crystal therapy, and when I reached out to her to for a chakra reading, she kindly invited me over for a visit. 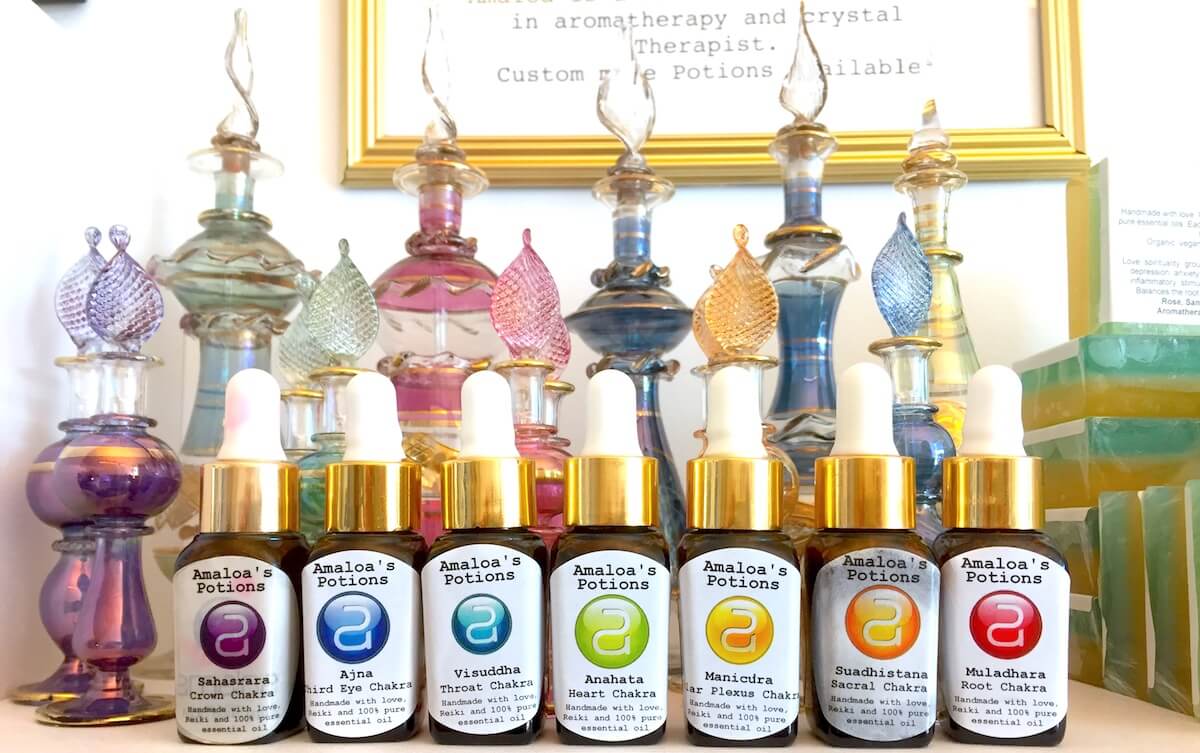 The moment I walked in, I was met with a vision of shining crystals, beautiful jewelry, handmade soaps and little bottles of various aromatherapy potions, along with the smell of incense and essential oils. It was warm and inviting, and Amaloa quickly made me feel totally welcome there. 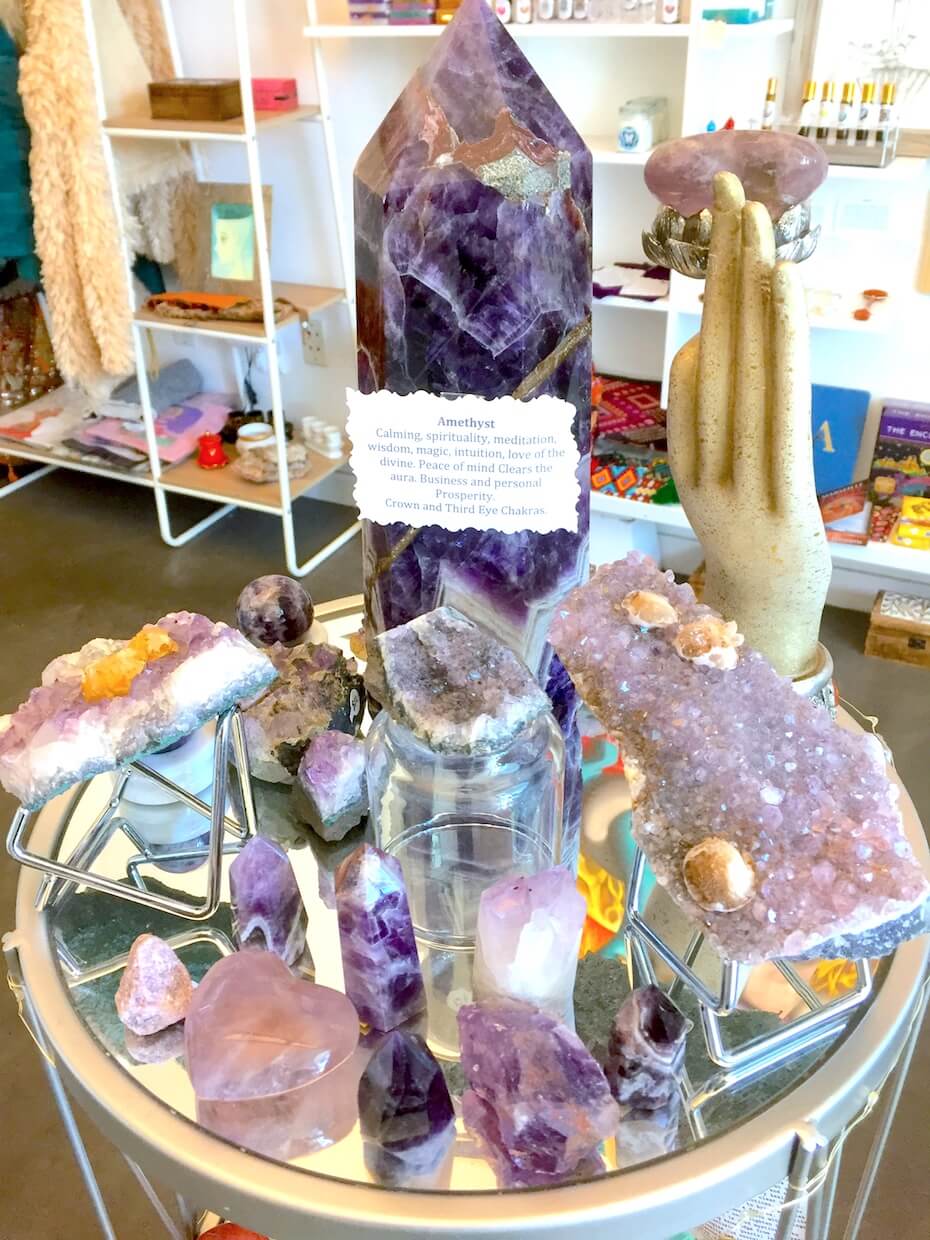 All About Chakras and Energy

Before she read my chakras, determining which ones were open and which ones were blocked, Amaloa wanted to set the word straight about a couple of things. While a lot of people think of chakras and energy work as something otherworldly, she explained, they're really just a part of nature. Energy comes down through the universe and flows through our bodies, and that energy flows through us and back out into the universe. It's all part of a natural cycle.

In order to read my chakras, Amaloa had me sit down on a stool and close my eyes, breathing deeply in and out while I relaxed my neck and shoulders. I thought about inviting in guidance and a message of healing. Since my eyes were closed, I wasn't privy to her process, but it was over before too long, and she immediately got into explaining what she'd sensed in me.

As Amaloa described the state of my chakras, she worked from the top and worked her way down. She began by explaining that my crown chakra, located at the top of my head, was open. This chakra involves spirituality and openness, and sends life force to the six chakras located beneath it.

Directly below the crown chakra, located between the eyebrows, is the third eye chakra. Amaloa told me that this chakra has to do with intuition and imagination, and said that this chakra is very open for me as well. She explained that I tend to trust my instincts and act based on what feels right for me, which I found to be accurate.

As the name implies, the throat chakra is the next chakra down. Amaloa explained that it pertains to the ability to communicate effectively and eloquently speak what's on your mind. Again, I was told that this chakra was wide open for me. As someone who writes and organizes ideas for a living, I'd hope so.

In my heart chakra, however, Amaloa told me that I had a blockage. This chakra pertains to unconditional love, and love for the self—not just love for others. When it's closed, it can signify difficulty relating with others or feeling closed off from the world. After all, there's always more we can do to better love ourselves. A blocked heart chakra is also related to feelings of sadness and hopelessness.

Under the heart chakra, below the chest, is the solar plexus chakra, and this one was blocked for me as well. Amaloa explained that it primarily relates to confidence and self-esteem, as well as willpower, and my blockage could relate to occasional doubts in myself. She said this is a particularly common chakra to be closed, particularly among young women, and that ending comparison is one way to help heal it.

Next down was the sacral chakra, located just below the belly button, and for me, this chakra was slightly blocked. This chakra has to do with creativity as well as love and desire, and even though mine wasn't entirely blocked, Amaloa said it would be most helpful to focus on it as if it were. It probably didn't help that I was having cramping in the area at the time.

The lowest chakra of all is the root chakra, which lives at the base of the spine. Amaloa told me that this chakra relates to the foundations of necessities of live, as well as drive. I was happy to find out that this chakra was open for me after a lot of blockages in the body above it.

Amaloa didn't waste any time before she got to work and started the process of opening up my chakras. Her shop sells wonderfully scented essential oil blends with different properties, which she calls potions. Among them are blends designed specifically to help open each of the seven chakras. Each bottle also has a piece of crystal inside to infuse its benefits into the oil mixture.

She grabbed tester bottles of the heart, solar plexus and sacral chakra potions and brought them over to me. First, she took a few drops of the heart chakra potion and dripped them onto my left palm before asking me to rub my hands together and breathe the scent in deeply, channeling it down to my heart. It had a sharp floral scent with a hint of citrus, and it immediately made me feel more at peace. It's said to help develop unconditional love, compassion and generosity, and provide relief from depression and anxiety. 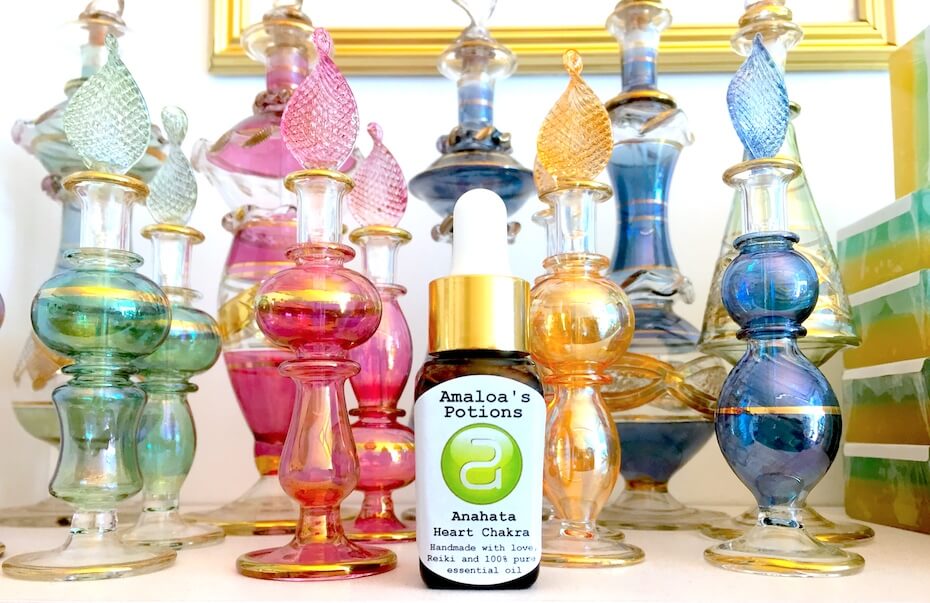 After a few moments, she had me repeat the process with the solar plexus chakra potion, this time picturing the energy flowing to the area beneath my chest. As I breathed this one in, it filled my nose with a woodsy scent with citrus, cinnamon and ginger accents. The uplifting fragrance is designed to help with self-esteem, as well as self-confidence. 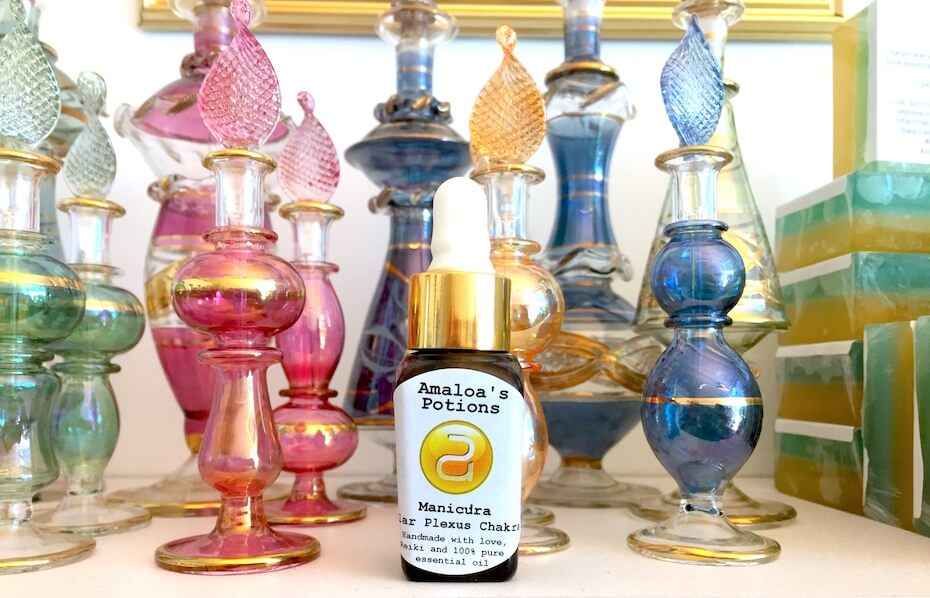 Lastly, she dripped the sacral chakra potion onto my left hand, and when I breathed in the citrus and flower scent, tinged with the lingering fragrance of the premium potions, I drew the power down toward my navel. This potion is said to instill enthusiasm, luck and creativity. 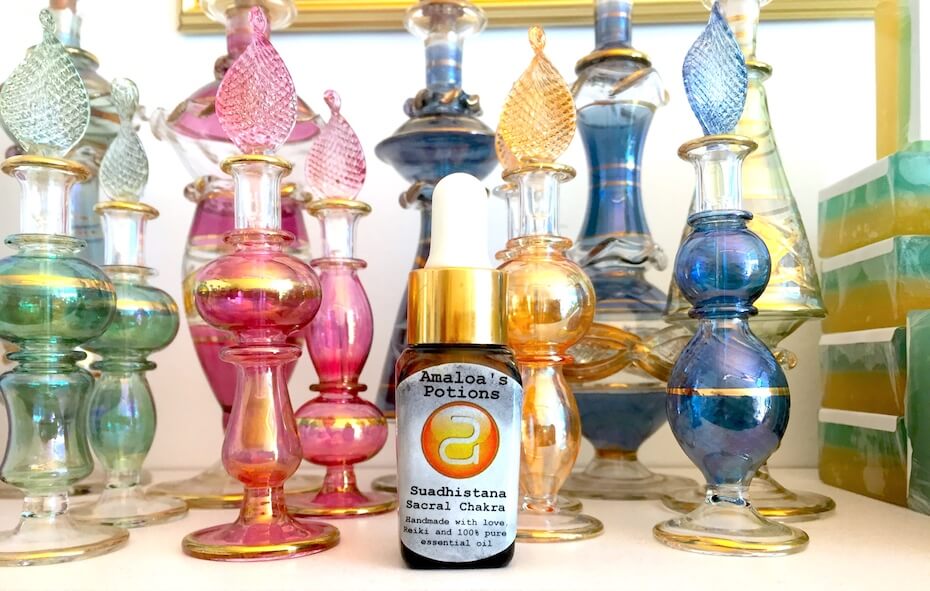 So, what exactly can be done when your chakras are blocked, or if you don't have access to handy chakra potions? According to Amaloa, there are a number of ways to heal each of these. The heart chakra, for example, is associated with the color green. She explained that the simple act of wearing green clothing can help to hear the chakra more quickly. Coincidentally, I was wearing a green bomber jacket that day. Amaloa said that my intuition was telling me exactly what to do.

But green isn't the only color of the heart chakra. She told me that pink is also great for healing it because of its association with love. Pink crystals, such as rose quartz, can also be used to help. She handed me a small, round rose quartz to hold as I focused on bringing the energy from the stone into my heart.

Later, she also explained that even foods can be used to help open up closed chakras. For example, green foods, including a lot of vegetables and fruits, can also be used for the heart chakra. The solar plexus chakra, however, is yellow, so foods including pineapples, lemons and mango are great for healing it. Lastly, there's the sacral chakra, which is orange. She said pumpkins and carrots are just right for opening up this chakra. I don't know if it's a coincidence or my intuition, but I'd actually purchased orange bell peppers over the weekend and planned to cook them with my dinner that same night.

You can also do your own aromatherapy treatments for your chakras at home, and there are even yoga poses that open up each of the different chakras. Amaloa explained that if you're stretching and working the areas that are blocked, your yoga pose will work wonders for those chakras.

According to Amaloa, most of us have done energy healing even without knowing it. For example, when we have headaches or stomach cramps, we'll massage them. She said that working the energy through the body like that is just one form of healing.

Since I'm a newbie to these things, it's impossible for me to say just how much Amaloa's potions helped open up my chakras (or whether they truly exist at all). Still, I do plan to continue thinking about them moving forward whenever I do feel an emotional or physical block in life, and see if I can make small energy changes to fix them myself. Either way, the process did make me feel better—and it left my hands smelling incredible, with the lingering scent of cinnamon and wood staying with me for hours afterward.

To learn even more about healing the chakras, click HERE to find out what you need to know about Reiki.