Arielle Gold, who turns 18 on May 4, 2014, is a snowboarder who was the youngest member of the U.S. Winter Olympics halfpipe team earlier this year in Sochi. 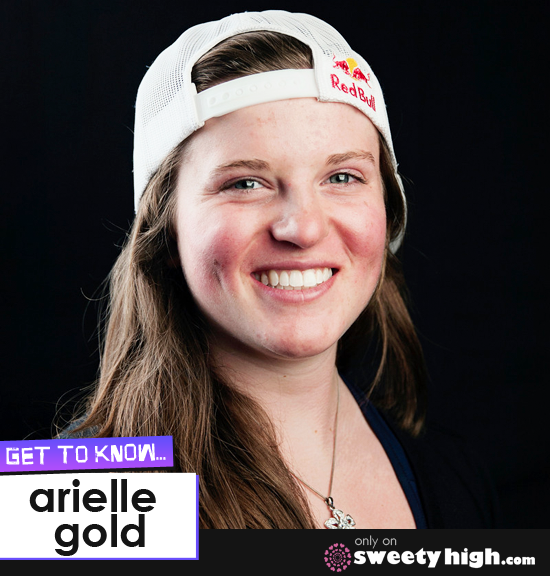 In a recent interview, Arielle spoke with us about triumphs, disappointments and what it means to her to be able to snowboard!

Arielle Gold was inspired to start snowboarding by her older brother, Taylor, who started snowboarding when he just was 7.

"He's two years older than me," she said. "When I turned 7 years old, I ended up giving snowboarding a try, and I ended up sticking with it."

For a while, Arielle took part in all five snowboarding events: halfpipe, slopestyle, giant slalom, slalom and snowboard cross.

"Once I got older, I started to realize you can't be the best at all of them without a lot of difficulty," she said. "I thought it would just be a good idea to try to just focus on one, and at the time halfpipe was my favorite. It still is."

Since then, halfpipe has become Arielle's signature event.

She said that the feeling of going through a halfpipe was tough to describe.

"You can't really explain it or do it justice without doing it yourself," she said.

Most of all, the experience is about exhilaration.

"It's definitely scary, just going through the flat bottom, and a lot of the time it can be hard to gauge your speed and really have an idea of how big you're going to go out of the halfpipe," she said. "That can sometimes be a little bit challenging, but what makes it fun is the unknown, and trying to push yourself as hard as you can, because even though it's scary, it's very rewarding."

This year, she even traveled to Sochi, Russia to take place in the 2014 Winter Olympics after visiting there last year for an Olympic test event.

"When I was leaving I was never banking on going back," she said. "I was thinking, 'Man I hope to get the chance to come back.' It was definitely a crazy experience going back there and being a part of it."

Unfortunately, Arielle was unable to compete in qualification after she dislocated her shoulder during training. Though the experience was a disappointment, it also taught Arielle a lot about herself.

"If anything, I learned there's always more you can do to prepare yourself," she said. "Going into that season I was focusing on getting my lower body and my core strong. Shoulders aren't something you really think about when you're training for snowboarding, so I overlooked that."

She said that the experience taught her that she needed more comprehensive training.

"I need to be strong overall rather than just focusing on certain areas," she said, "because really anything can happen."

Still, Arielle had the opportunity to celebrate. Teammates Kaitlyn Farrington and Kelly Clark took home the gold and bronze medals in ladies' halfpipe finals, and Hannah Teter came in at a close 4th.

For now, Arielle said that the next Winter Olympics aren't the first think on her mind.

"I'm just trying to focus on relaxing for a little while and unwinding, because this season was so hectic," she said. "I'll definitely get back into training soon, but I don't think I'll start thinking about the Olympics until we get a lot closer to it."

Arielle said that preparing for an event four years away just isn't her style.

"I just focus year by year, and try not to get too wrapped up in the big picture," she said.

In fact, that's one of the biggest pieces of advice Arielle Gold has for aspiring snowboarders.

"Always try to have fun with it," she said. "It's easy to get wrapped up in the idea of trying to win money and all that, and end up forgetting about the fun aspect of it. I think if you're not having fun doing it you, should try to find something else that you enjoy."

As of this week, Arielle also finished her last high school class!

We wish Arielle Gold all of the best in all of her future competitions, and hope she'll get to compete in the Winter Olympics the next time around!

Be sure to follow Arielle Gold on her social pages below, and be sure to comment below and join us at SweetyHigh.com to tell us all about your favorite sports and athletic endeavors!