When it comes to dreaming big, Abby Harrison has set some incredibly high goals for herself.

Known as Astronaut Abby, the 19-year-old has her sights on being the first person to step foot on Mars.

We chatted with Abby about how long she believes it will be until she visits Mars, her advice for girls who want to pursue a career in STEM and what helps her push through those times when doubts starts to creep in. 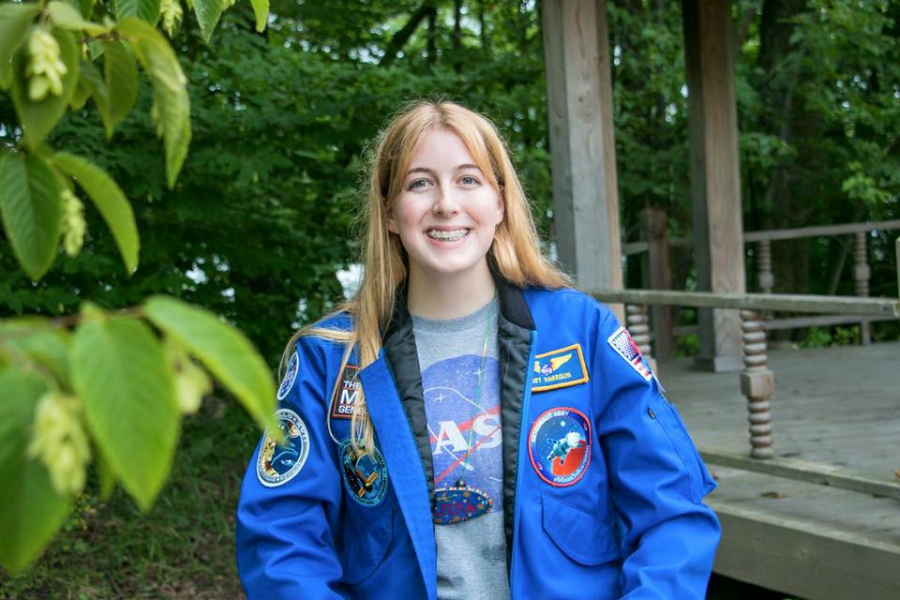 Sweety High: It's been a while since we've last spoken. What have you been up to in the past couple of years?

Abby Harrison: I've gone off to college. I did research in Siberia over the summer. I was working on Baikal, which is the world's oldest lake. In a lot of ways it acts as if it were an ocean, and plenty of scientists believe that there is actually a small ocean growing underneath the surface. While I was there, I did research on how the changes in the nutrients that are being funneled into the lake affect the growth of algae. When you affect the growth of algae, you affect the growth of everything else in the lake. The short of it is I spent a lot of my time with my face in really, really cold water watching snails.

I also started a non-profit about a year ago. Within a year we've grown quite an online following. We've signed on 200 or 300 members who are in our leadership training programs. We've sent 10 kids from low-income families to space camp on full-paid scholarships.

SH: Speaking of your non-profit, what inspired you to start The Mars Generation?

AH: When I was 13 years old, I went to Space Camp for the first time in Huntsville, Alabama. And I went through a nonprofit in Minnesota called Reach for the Stars, which takes I believe about 40 kids every year from Minnesota and does what's necessary to make sure that every kid, regardless of financial means, can get to space camp. To me, that meant a lot. And it really was pivotal in my fruition of this dream and continuing to follow it throughout high school, which can be a very difficult point for students, and especially girls in STEM fields. So it was then that I decided I wanted to have a way to give back. I wanted to have a way to be able to provide that resource to other students. And so the idea of providing Space Camp scholarships is what originally started The Mars Generation. Then we also decided to have the encompassing of the outreach work that I had been doing with Astronaut Abby.

It's crazy to look back on it now and remember thinking to myself about someday being able to do this. Now I'm doing it.

SH: Do you remember the moment you realized you wanted to be an astronaut?

AH: For as long as I can remember, I've been fascinated by space and the concept of space travel. It was something that was always just there for me. I always had an answer to the question of 'What do you want to be when you grow up?' But there wasn't any particular moment that I can remember.

SH: What drew you to want to be the first astronaut to step foot on Mars?

AH: Growing up, I'd always heard about the astronauts that walked on the moon. They were my idols. They were the people I looked up to like no one else. I wanted to be like one of them. And as I got older and I started thinking about 'Why haven't we been to Mars yet? Why hasn't someone stepped foot on Mars yet?,' I realized this was something we were definitely going to do and I fit so perfectly into that timeline.

Over the last 10 years, we've had scientists and politicians saying we will go to Mars within this generation, so I thought 'Well then why shouldn't I be the first person to step foot on Mars?'

SH: What does your timeline look like for you actually stepping foot on Mars?

AH: Right now I am 19 years old and it is 2016. I won't apply to the astronaut core for another 10 years. And the reason for that is that I still need to finish my undergraduate degree, so I have two more years. Then I need to get a doctoral degree, so that's another four to six years. I have about six to eight years of school left, and then after that there's a requirement of having one to three years of professional experience in your field of study before applying. I'm looking at about 10 years before I apply to the core. Then I imagine it'd be another 10 to 15 years after that before we pursue a Mars mission. So that puts us at about 20ish years out from now, so mid-2030 is when I truly believe that the first mission to Mars will be underway. And then hopefully I will be on Mars.

A lot of people wonder why we can't go to Mars sooner, but going to Mars is really difficult. It's a huge undertaking. It's on a magnitude that we as the United States and as humans as a whole have never tried before. And so to look at that and wonder where can cut corners or save time is a really bad attitude to have, because it's not a question of how soon we get there as a matter of how safely we get there.

SH: Now how long do you think it will be until people are able to live on Mars?

AH: I don't think that will happen in our lifetime. We are at least a couple hundred years out from having colonization on Mars. In our lifetime, we will definitely see visitors to Mars, and hopefully we'll be able to see people staying there for longer and longer periods of time. But when it comes down to it, living on Mars for a full lifespan is an intense process. It's not the type of thing that you can set up overnight. There are certain things that need to be done that can't be rushed.

SH: If it were possible to visit any other planet in our solar system, is there another one you'd want to step foot on besides Mars?

AH: Europa, which is actually a moon. It's one of the most interesting places in our solar systems. I love the concept of there being liquid oceans underneath its ice crust, and there's a lot of evidence pointing to that being true. The idea of there being liquid, floating water some where so near to us in space is so exciting. Liquid water is often thought of as one of the starting points of life. So going to Europa, exploring that possibility and potentially finding extraterrestrial life forms would be a very valid goal.

SH: Who is someone that you really admire and look up to?

AH: Luca Parmitano, who is an Italian astronaut I met when I was 13 years old. He ended up being my mentor all throughout my teenage years and I worked as his earth liaison while he was in space. He is an amazing role model, not just of greatness in STEM, but of greatness in STEM communication and outreach. He really gives everything that he can to inspire other people, myself included.

SH: If you weren't going to be an astronaut, is there any other career path you'd like to pursue?

AH: I'd love to be a teacher. I really have a passion for education. There's nothing more important than tending to the next generation and making sure that they are mentally prepared for all the challenges that they'll be facing.

I also love many, many, many fields of science. I could easily say I want to be a geologist or a physicist or this or that. There are so many interesting scientific fields I'd love to be involved in, but I do think teaching tops them all.

SH: What's your advice for girls who want to pursue a career in STEM?

AH: Find someone who is in the field that they are looking to enter and ask them to be your mentor. Ask them to give you guidance and support on how you can go about making this a reality. It's really important to have someone who can help you pursue your goals even when times get hard. Because girls face more hardships, I think, when pursuing these careers than their male peers do. It's nice to have someone by your side who has already done it and knows the ins and outs of what you might run into.

SH: Sort of on the flip side of that, what's your advice for girls who are still trying to figure out what they want to do with their lives?

AH: Don't stress it. Explore things that you find interesting. Pursue hobbies. Definitely do not turn off math or science though. Even if you don't think you're going to go into a STEM field, math and science come into our lives in so many different ways. I can't stress enough how important it is to stay focused in school, and especially on those subjects.

Other than that, I would say pursue the things that interest you and eventually you'll figure it out. My older sister who's two years older than me has the same parents, grew up in the same house, the same conditions, everything, had absolutely no idea what she wants to be. She's incredibly intelligent, but she's the opposite of me in basically every way. She's not interested in science or math. She's still trying to figure out what she wants to do, but she's had a lot of adventures along the way. And so there isn't a right or wrong way to go about finding your career path.

SH: What's the one piece of advice you always turn to when you start to doubt yourself?

AH: What I do when things seem like they are too difficult, which happens a lot in college, is I imagine putting those first boot prints on Mars. I close my eyes and envision what it will be like to climb down the ladder, to put the first foot on Mars and to plant a flag—those types of things. It reminds me that no matter how difficult things seem right now, there's a reason for everything that I'm doing. In the long run, it will all be worth it.

Maybe you're not as passionate about space as Abby. Maybe you're more into baking. If that's the case, head over HERE to read the inspiring advice the founder of Sprinkles Cupcakes for all you aspiring bakers.