Before You Exit Plays "I Like That" at Sweety High!

The latest episode of SweetBeatTV brings musical trio Before You Exit into the Sweety High studio for an amazing interview and game of "I Like That"!

Riley, Connor and Toby McDonough of Before You Exit begin by discussing their first-ever red carpet at the 2014 Radio Disney Music Awards, and how being three brothers in a band draws a comparison to the Jonas Brothers!

They also chat the excitement of their "Dangerous" first headlining tour, and in honor of their recent cover of John Legend's "All Of Me," the guys discuss the most romantic things they've ever done!

To top it all of, they play a game called "I Like That, " where they let us know the things they love and hate by singing a bit of their song of the same name!

Be sure to check out the exciting interview and tell us what you think in the comments below and at SweetyHigh.com! 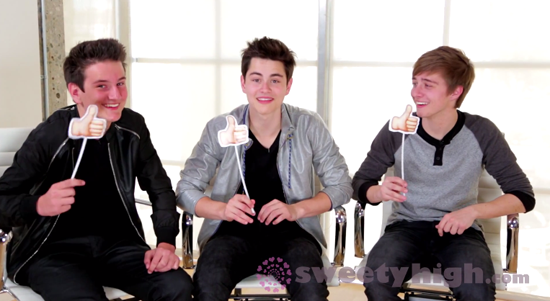