18-year-old singer-songwriter Brynn Cartelli has had quite the musical journey since winning Season 14 of The Voice, and her new EP, Based on a True Story, is the culmination of much of the work she's done since then.

The collection of six raw, personal and stunning songs, out today, shows Brynn and her talents at their very best, and after getting the chance to preview them, we simply had to know how each of them came to be. Lucky for us, we got the opportunity to hop on a Zoom call with the star herself, and she took the time to break down every Based on a True Story track. And guess what? The EP's title says it all. 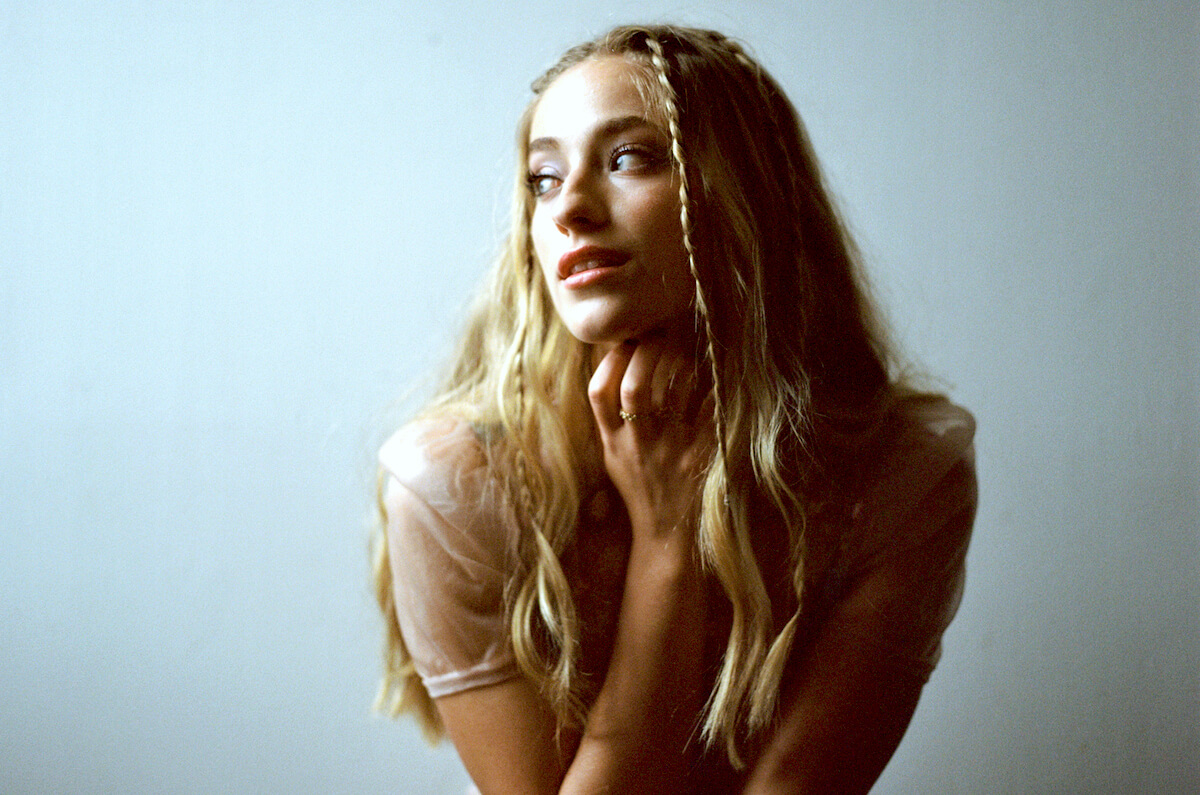 Brynn Cartelli: I wrote "If I Could" about a time when I was hearing a lot of stories about my friends and people in my life accepting love in relationships that weren't meeting their standards, or thinking they could change people, when maybe the people they were seeing was just not that great of people. And I am very, very defensive of my friends. I hate to see them hurt, and I hate knowing that somebody is playing with them. There was one particular night when I could not fall asleep because it was upsetting me so much. I think it was the next day that I was going to L.A., so when I got there, I sat down with my co-writer Ben Abraham, and we were fishing for ideas. I realized I had a story to tell.

I wrapped up "If I Could" in New York at the end of 2019. It's always held a special place in my heart, and I knew that one feels really definitive, to me of what I really want the EP to be, and what it's achieved. It's so fun to tell stories and share the bare bones of who I am as a songwriter and person. That one really means a lot to me and always has.

BC: "Imaginary Stranger" is one of my favorite songs. I know I'm not supposed to really have favorites, but I'd had the title "Imaginary Stranger" in my phone for a long time, and I've been waiting to write a song about that forever. It's about having a connection to somebody that you've lost. In this case, it was a family member of mine that I've always had a connection to, even though I never met him. When I was younger, I used to talk to him, and I kind of have the strange belief that I am somehow the reincarnated version of him. I just feel like his soul has been a part of mine.

And it's so strange because I've been fighting for a song like "Imaginary Stranger," just wanting to honor him in this whole process, and when the song happened, it was very emotional. It's about my mother's father, and I remember writing it in L.A. and my mom came in at the end of the session—she dropped me off because I can't rent a car in L.A.—and was listening to us, just to the pianos and the drums in that song, and all of a sudden her face changes, like, "What is the song about?" And I watched her slowly realize what "Imaginary Stranger" was.

It's definitely one of the most personal songs on the EP, but sonically, I think it's kind of ahead of its time, in a way. That's the kind of music I want to continue doing. As I build off of what Based on a True Story was, that's the foundation. "Imaginary Stranger" reaches into the world that I want to go to next. I love that song. It means everything to me, and it took a really long time to get it finished because I was adamant about getting it perfect.

BC: "Long Way Home" is so fun. I was writing with Nathan Chapman and when it started out, we were kind of joking around, and I was playing it on the piano and it sounded super depressing. He was like,"No, it's not gonna sound like that. Like, let me pick up a guitar." And immediately I was like, "Oh! This is so fun."

I was writing a lot of sad songs at the time, so "Long Way Home" came out from that. I thought, "This is what I need to do. I just can't write another sad song right now or I'm gonna be depressed for a month." It really helped to lighten up the mood and let it happen naturally. I love "Long Way Home." I think of it as a transition song. As "Imaginary Stranger" is a transition into the next set of music I want to put out, "Long Way Home" is the connector to the old music I've done. I wanted both worlds so they could all feel like me and there's some kind of string lining it all together.

'Love You in My Mind'

BC: "Love You in My Mind" was the first song I wrote. It wasn't even for this EP—I wrote it while on tour with Kelly Clarkson. I was all by myself and we were playing shows near my hometown, so I was able to come home for a couple days in between the shows, and that's when I wrote "Love You in My Mind." I wrote it at home, at my piano, right there! I went back to the show and played it for Kelly in her dressing room, and then she was crying. I felt like that was a good sign.

It means so much to me. It's about that feeling of wanting to tell someone how much you love them and just being able to act on it, which is such a painful experience. I worked on the production with Adam Argyle, who I did "Imaginary Stranger" and a couple of others with. I'm really proud of that song.

BC: "We Belong" is such an interesting one. I wrote it in L.A., with Martin Terefe. We had something going and I was really excited about it, and then for the second verse, he asked if I wanted to get lunch. I'd just had something to eat, so he was like, "Okay, well I'm gonna go get lunch, but you stay here, and I'm gonna put the loop on the computer and you can write something for the second verse, and I'll come back when it's done."

He ended up being gone for so long, and so I was stuck in there with this same loop. I was losing my mind, and I couldn't get it to stop. I'm so bad at anything involving a computer, I just can't do it. So I was just going crazy in there trying to write a second verse But, out of that, we got "We Belong."

It's kind of an ode to my friends here in my hometown. I'm graduating high school, and I wanted to put out this EP while I'm still in high school. This is my high school experience and I wanted to reflect that. I live in a very small town, and that's what we feel, and this is what we know. And somehow we all work together, and we belong.

BC: Jane is a funny, long story. It's a song about, if there could be another form of yourself, wishing that you could do better like in another life, Maybe you could do better in a relationship or be better at love, is really what this song is about. And my mother almost named me Jane. It's a name she always considered for me. I was in this situation where I wondered how it'd be if that was my name. Maybe I'd be a little bit better at this thing, maybe it would fill in the flaws that I have, and maybe I'd be lacking in some other areas, because obviously no one is perfect. But maybe it would fix the things that are a detriment to me right now, and in the most heartbreaking way.

I wrote that song in January, while the rest of the music had been written back in 2019. 2020 was a whole year of working on other things, but then I wrote "Jane" and sent it to the label and they said it needed to go on the EP —that this would be our final track. It just became that missing puzzle piece that we didn't know we needed, and in the most magical way.

I'm so grateful for Jane and I love Jane. Jane has become a character in my life. Now, when I do something wrong. I'm like, damn it, where's Jane? It's so weird, because I actually feel like I have a connection with Jane. There are so many characters in my songs, like the person I'm speaking to in "Imaginary Stranger." They're all characters in my life. And I think Jane is the most used as a meme in my house. I love that song so much. That and "Love You in My Mind," I wrote by myself, and they feel like my babies. And I think "Jane" can have a pretty big impact on people. I'm really excited for that one.

Based on a True Story

BC: Based on a True Story is what you see at the beginning of a lot of documentary-style movies, and that's what I feel like this EP is. It feels like a documentary of my life over the past couple of years. While I was making it, I really tried to stay off my phone a lot. I wasn't on social media much, wanting to fully immerse myself in this process. I used a note in my phone to keep track of a couple titles that I had for it, but I was really struggling because I didn't really know if I wanted to do a title track. It wasn't going to be self-titled. I didn't know what it would be.

I had Based on a True Story in there, along with a few other ideas. But then I was just kind of hanging on to it, and I was so embarrassed to bring it up. I wasn't sure. And then I realized that the acronym was BOATS. And that struck a chord for me. This is the BOAT. That's the greatest thing I've ever heard, because it's just so stupid. I actually love Based on a True Story because it sounds so elegant.

I'm gonna let the songs speak for themselves. They tell the stories of my life and discuss things I've never really talked about before. That's why it's quite terrifying to release it. It's coming down to the wire right now, where everything's getting very anxious. It's a very strange feeling. But the songs are going to tell you the rest of whatever you want to know.

Want to discover even more about Brynn? Click HERE to find out all the reasons Brynn was our Woman Crush Wednesday.