Sometimes, you need a break from video games about fighting, shooting, jumping and puzzling. When those times come, a good visual novel is just the thing to soothe the soul.

That's even truer when it's a laidback narrative about being the proprietor of a coffee shop in a fantasy world, and that's exactly what Coffee Talk is. The game released earlier this year, and from the second I watched the trailer, I knew I'd be all over it.

I reached out to the game's creators, who were kind enough to provide me with a review key for the game on Nintendo Switch, and here are all the reasons I adore it.

Coffee Talk takes place in Seattle, Washington over the course of a couple of autumn weeks in 2020, but that doesn't mean its world looks exactly like ours. In this version of the world, humans and fantasy beings, including succubi, elves, vampires and mermaids, coexist the best they can. 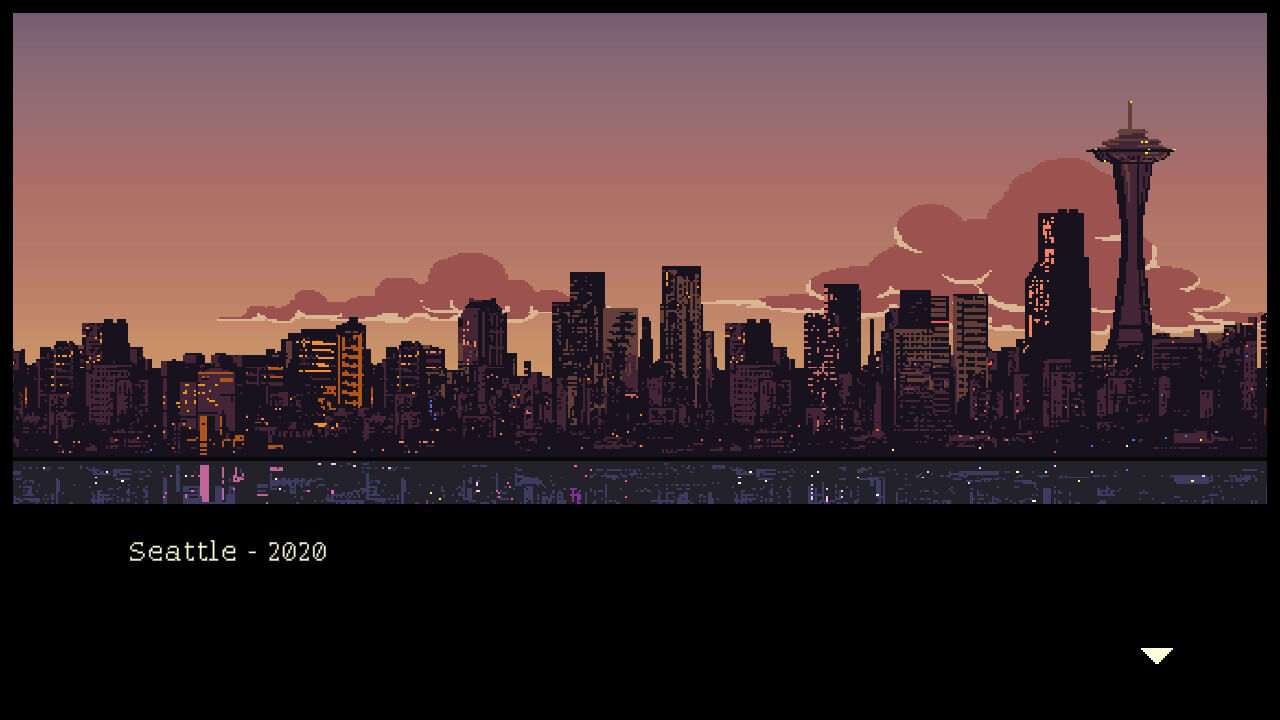 The player takes on the role of a mysterious barista who owns and runs a coffee shop that's open past midnight, attracting an unusual clientele. There's the human writer Freya, who does her best work after dark with a strong espresso in hand, an outspoken vampire model called Hyde, and Neil, a traveler from another planet who's looking (poorly) for mates through dating apps—and that's just the beginning of the peculiar folks you'll encounter working the nightshift. You'll also meet orc game devs, nekomimi cat people and hospital administrator werewolves along the way. 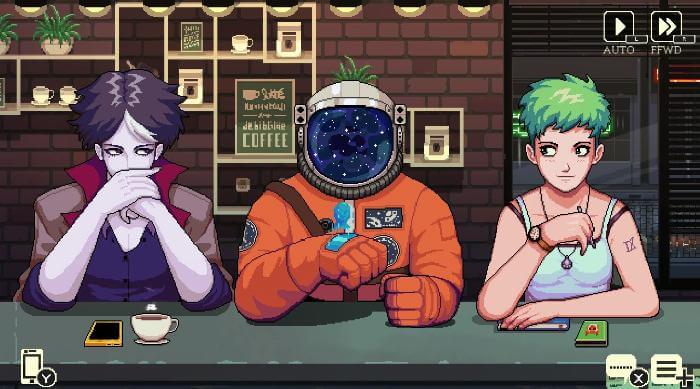 Though the discussions the characters have can sometimes be a bit simplistic and don't necessarily tread new ground, they contribute to Coffee Talk's strong world-building. By the end of the game, player's have a great sense of what it means to live there, despite never having left the coffee shop. Daily newspapers from the in-game Evening Whispers newspaper reveal what's happening more broadly in the world, and honestly, it's not that different from the realities of our ordinary human lives, with a little bit of magic thrown in. It develops the world beyond the gameplay , and while the topics can get a big heavy, and even mature, at times, it's all dialog-based, and no more adult than anything you'll hear on a teen-rated TV show.

The game's pixel art is also incredible, and while it's inspired by games of the '90s, its look surpasses everything from that era. Overall, the style reminds me of the very best of Phoenix Wright's pixels, with a jazzy soundtrack to match. Best of all, you can flip through the tracks whenever you feel like it so the music always suits your mood.

Unlike many visual novels, Coffee Talk never provides the player with dialog options to push the story in different directions. While most of what unfolds is completely out of the player's hands, you can impact some subtle yet critical story elements with the hot drinks you choose (or attempt) to serve. I find that unusual, but it worked well for me. 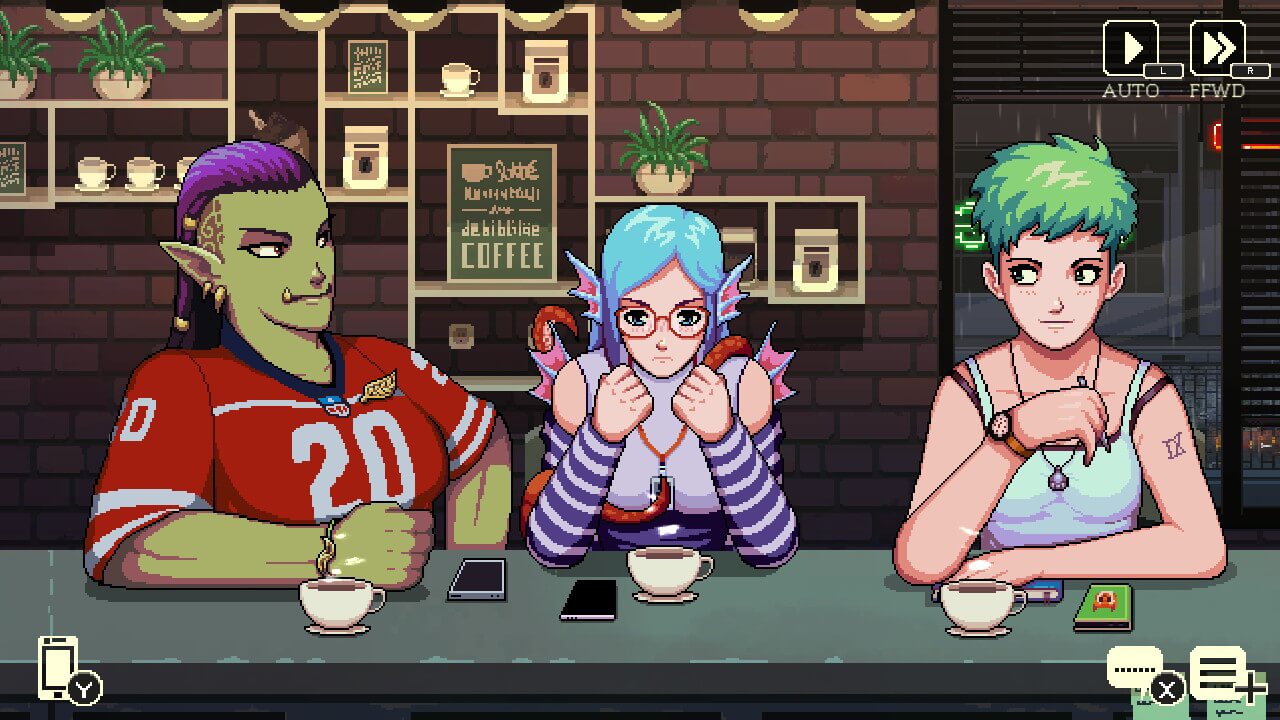 With three exceptions I can think of, serving the correct drinks was a matter of wanting to do a good job. I didn't know that serving the wrong coffees didn't matter, and that no matter what I did, I'd get to the end of a mostly unchanged story.

Of course, that didn't mean that I wasn't incentivized at all. As I befriended colorful new characters (sometimes literally) by serving satisfying beverages, I slowly unlocked their full profiles in the game's Facebook-like Tomodachill app, revealing more about each one as our relationships developed.

If you're mostly interested in diverging paths and a story that's all your own because of the decisions you make, Coffee Talk might not do it for you. However, if you're content just to see a wonderful story unfold, you're probably going to love it. With writing that's a ton of fun to read and a huge cast of captivating characters, it's hard not to fall in love with the unfolding narrative.

At the end of the day, Coffee Talk is about listening to customers' dreams and troubles and serving them hot drinks to keep them happy. Right away, the game introduces you to how that works. The game's first customer asks for a triple espresso. Each drink requires a base, and primary and secondary ingredients, but easily enough, the recipe for that drink is coffee, coffee and more coffee. 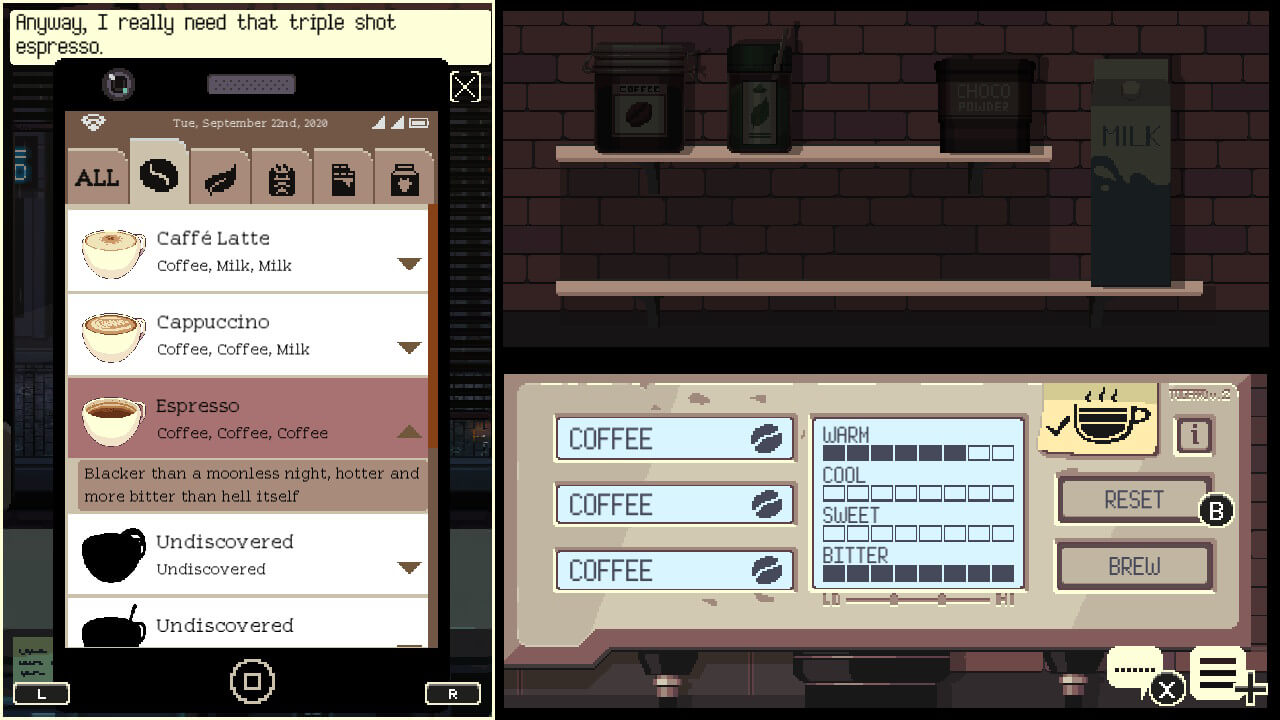 While your list of ingredients is limited at first, little by little more items are added to your inventory until you can make a unique variety of tasty hot beverages. While you have to start with a base of coffee, green tea, black tea, chocolate powder or milk, additions such as ginger, mint, lemon, honey and cinnamon mean there are a lot of options and potential drinks to make—particularly given that the order of the second and third ingredients impacts the outcome fo your drink. 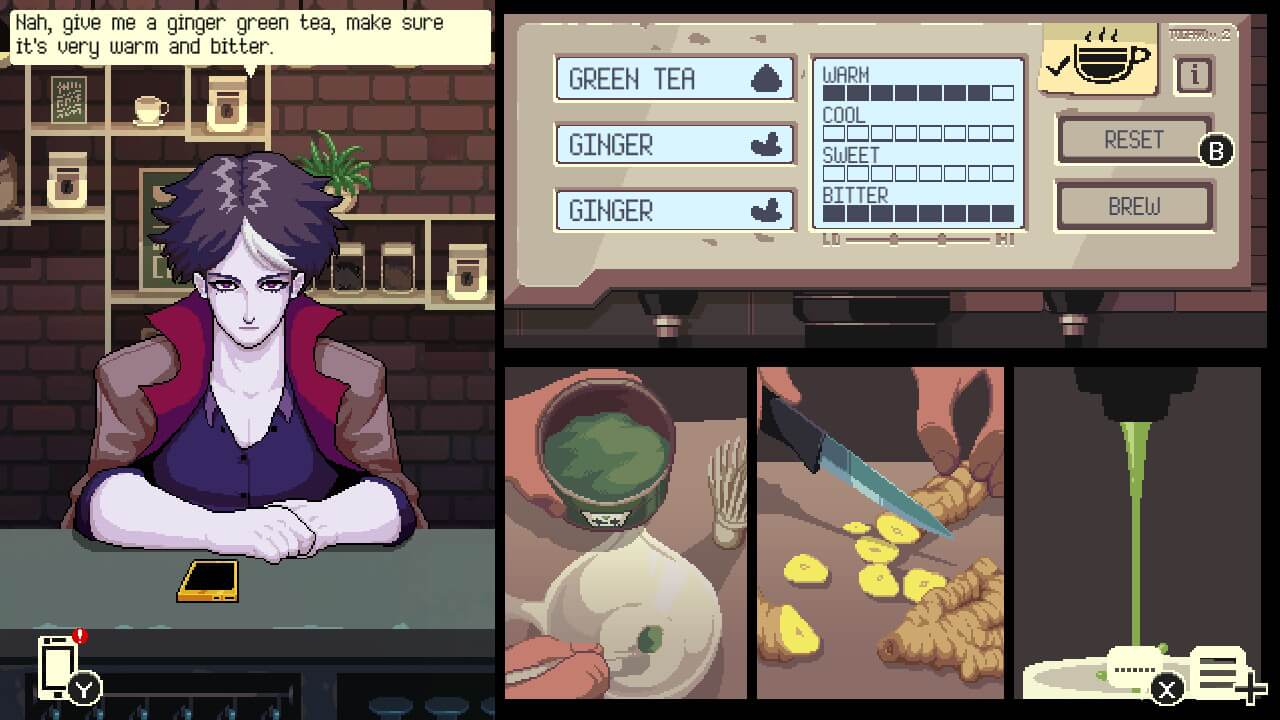 Some customers will tell you exactly how to make the drink they want, while others will name a brand new type of drink that leaves you guessing. Recurring customers might ask for their usual. Other times, they'll tell you an ingredient or two as well as the drink attributes they're looking for. I found it really fun to brew their drinks properly using clever guesswork, even if I only had to pick three ingredients to make that happen.

Before you serve a drink, you'll also be shown the name of the beverage and its appearance. If a drink has a non-generic name, like "Spiced Lady" or STMJ", as opposed to something like "Honey Ginger Tea," serving it will unlock that drink in your Brewpad recipes list for later reference. If you're going for something specific, you can also toss the drink and try again up to five times, so you can tinker if you think you're on the right track. 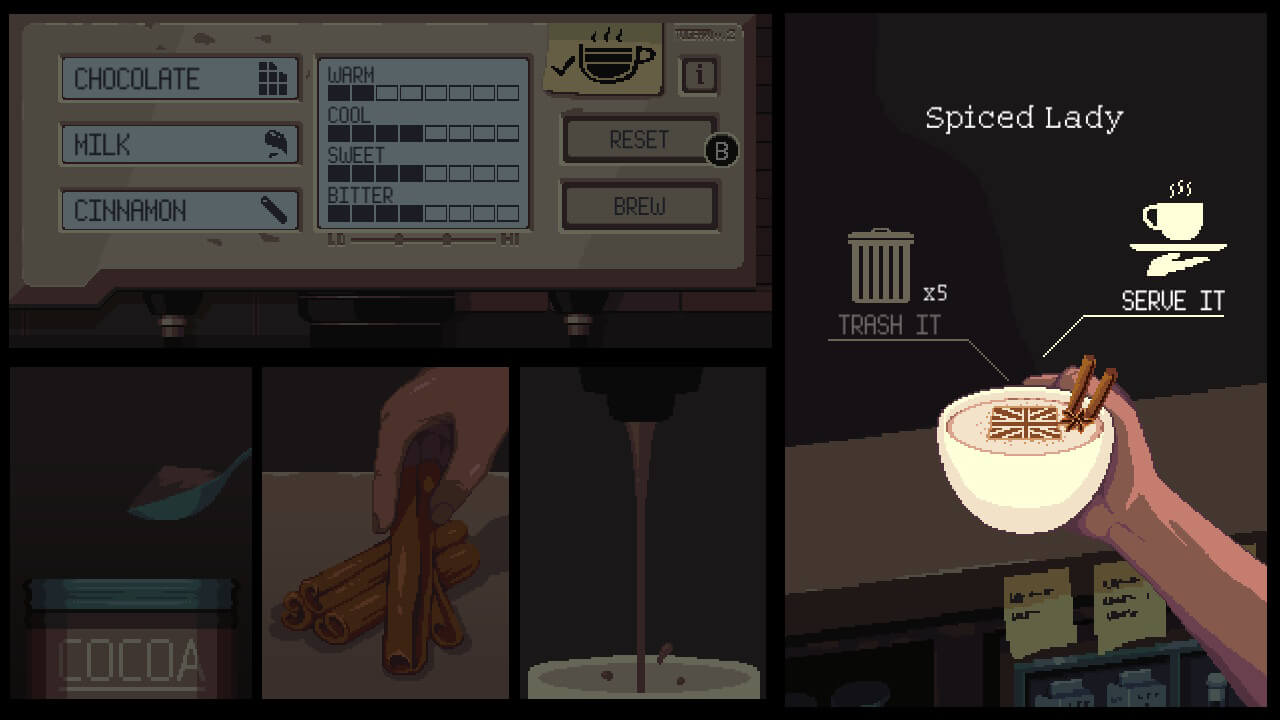 You can even add latte art to the top of the drinks, but unless the patrons asked, I skipped that part because mine always looked like a mess. Once, I accidentally made this green tea latte dragon with a fiery tail, and that was enough for me. 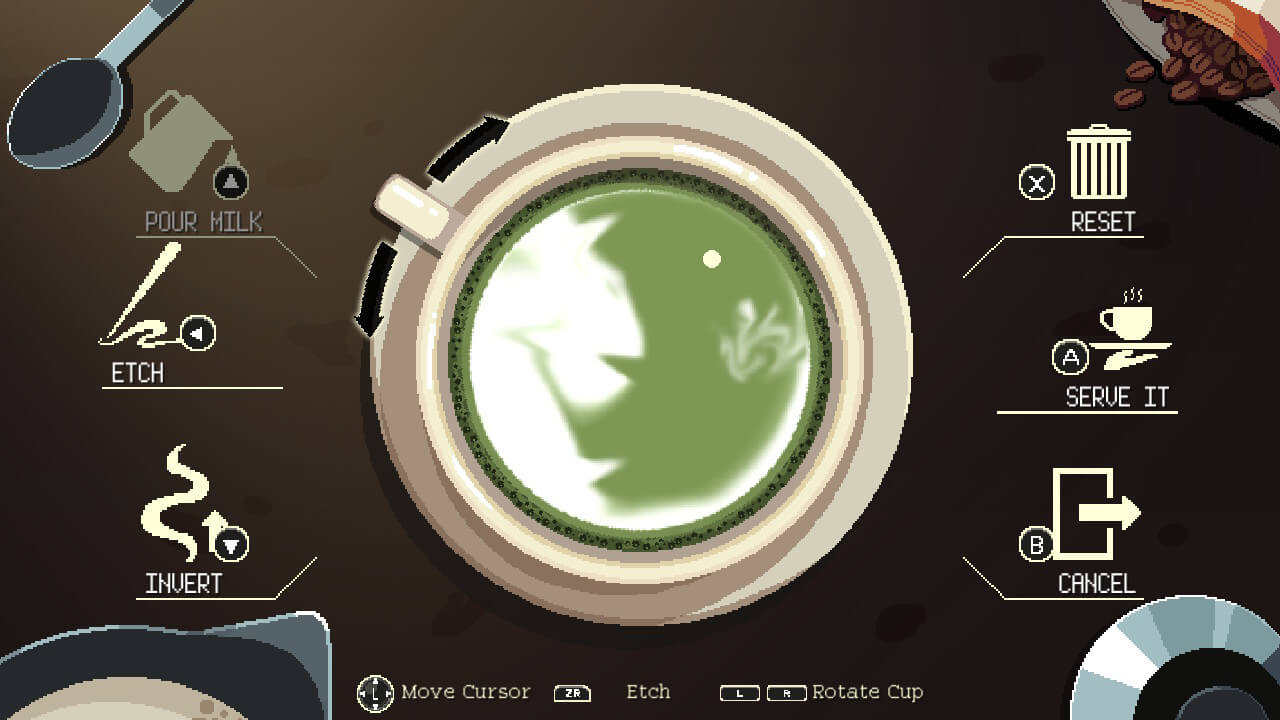 If you find the trial and error of drink-building frustrating in the main game, you can also craft as many drinks as you like the game's Endless mode Free Brew game to systematically try every possible drink combination. That's exactly what I did, and I found it ridiculously satisfying to figure them all out on my own—but that might just be me.

You might want to pay attention when your customers ask for something unusually specific. Will you be able to find the perfect drink to soothe a werewolf's fury during a full moon, or concoct something even a space being would find delicious? When an overworked and exhausted patron asks for another triple-shot of espresso, will you serve it to her?

In Coffee Talk, there are no choices beyond the drinks you make, so choose wisely. However, if you ever realize that you were going through things too quickly, you can always pull up a log of all of the dialog from that day to remind you exactly what someone wanted to drink.

Doing It All Again

The first time I finished Coffee Talk, the game told me, "You've beaten the main story of the game. But, you haven't seen everything yet…" I'd spent a little over three hours on the game so far, but those words made me feel like it was daring me to play again, challenging myself anew with all the insights I'd gained along the way. I immediately took it up on that challenge.

By being a very crafty player, it's fully possible to unlock the "true" ending the first time around. That wasn't me. There were story points in my first playthrough that felt important, but I wasn't necessarily be armed with the right recipes to do exactly what I wanted. Playing again made me appreciate the game and its wonderful characters even more. By the end of it, when I learned what Coffee Talk was really about, I found that new knowledge to be worth every second of the replay.

Coffee Talk is out now on PC and Mac, Nintendo Switch, PlayStation 4 and Xbox One for $12.99.