Cris Tales Is an RPG Where You Can See the Past, Present and Future

If you could manipulate the past and peer into the future, what would you do?

That question is posed in the upcoming Cris Tales, an RPG by Dreams Uncorporated and Syck, which allows the player to see (and touch) the past, present and future simultaneously and use that power to save the world. While I didn't get to play it myself, I did sit down to watch a 20-minute demo with the creators at E3 to find out more about the impressive game, and somehow, they really pull it off.

Cris Tales tells the story of Crisbell, a girl who finds herself in possession of the Crystal of Time, giving her visions of the past as well as the future. This incredible power gives her the opportunity to prevent impending catastrophe. It helps that her buddy Matias, a talking frog, also has the ability to hop back and forth in time, giving her the ability to manipulate the timestream as well.

All three times appear on the screen simultaneously. On the left sliver, you can see the past, perhaps seeing a younger version of a character, or the absence of something that exists now in the present. On the right part of the screen, in the future, you might see an older version of a character—or see that the character is no longer around at all. And if something is awry in the future, it's up to Crisbell to make a change now to prevent that negative future from ever taking place. 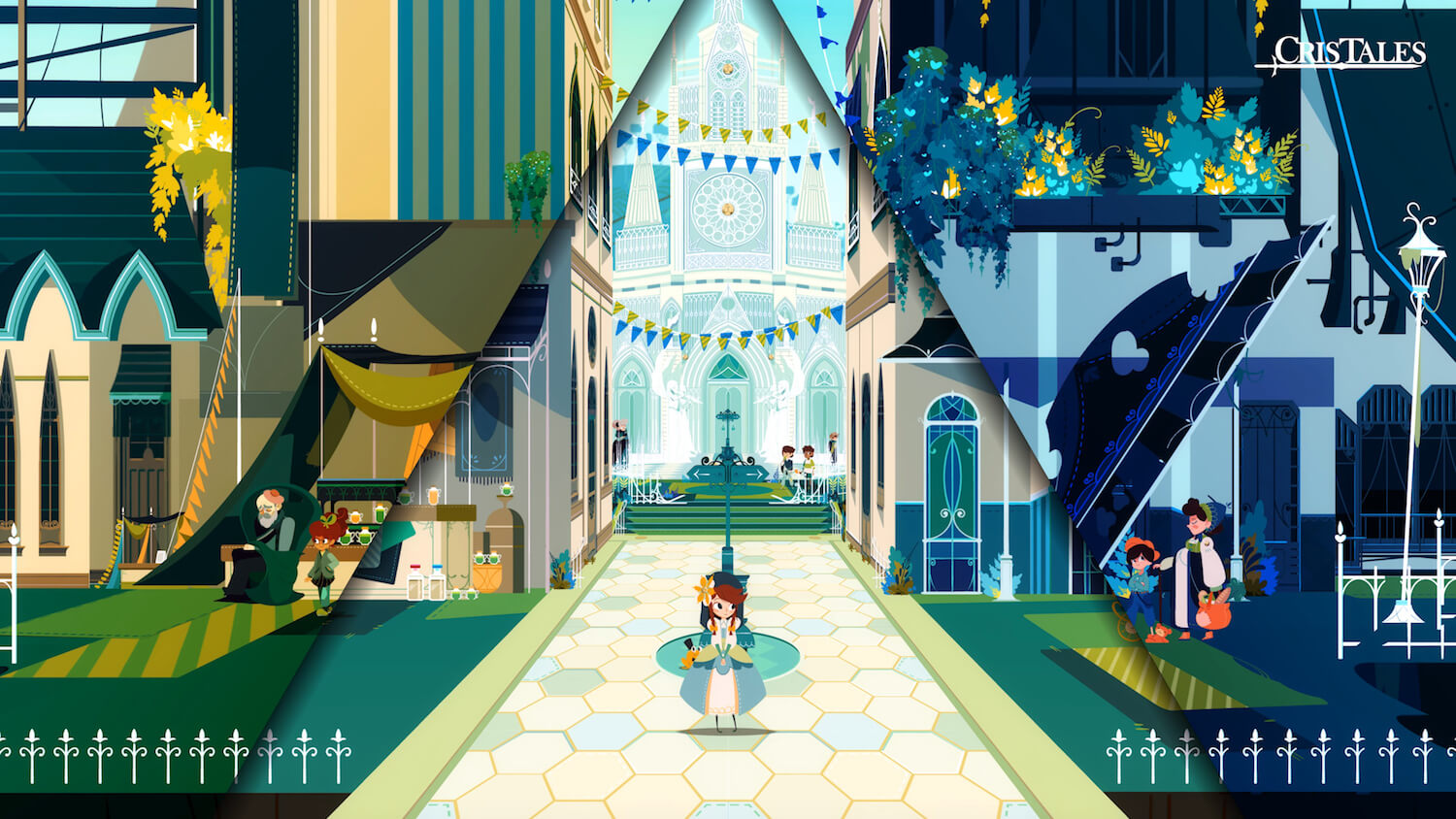 During the demo, for example, Crisbell sees that in the future, two of the town's buildings would somehow become destroyed. She speaks to the owner of one of the houses, who leads her to the town carpenter, who leads her to the apothecary. At first, the apothecary is too busy to help, but by looking into the past and solving a quick puzzle, you can ease her mind and recruit her help. She needs a certain plant to make the potion that will save the houses, which sends Crisbell to the forest. By planting a seed in the present, she can then leap forward into the future, to grab that future tree's fruit needed to make the potion.

It's this kind of creative thinking that immediately drew me to the game. But just because Crisbell is able to get to the solution doesn't mean she can set everything right. For example, this fruit only makes enough of the potion to save one of the buildings, and Crisbell is the one left with that choice. The actions you make ripple into the future, and you might have to end up living with some tough decisions.

As Cris Tales is an RPG, this unique system also applies to the combat. The fighting is turn-based and looks pretty traditional at first glance. By properly timing your button presses, you can even do additional damage, or defend and deflect most of the damage, as in some classic Mario RPGs. But you can also play with time during the fight in creative ways.

For example, the appearance and traits of enemies are affected by time. You might decide to send one enemy to the past, where they're less powerful, but more agile. In the future, they may have mighty magical ability, but limited mobility. This essentially turns every fight into a puzzle to be solved. 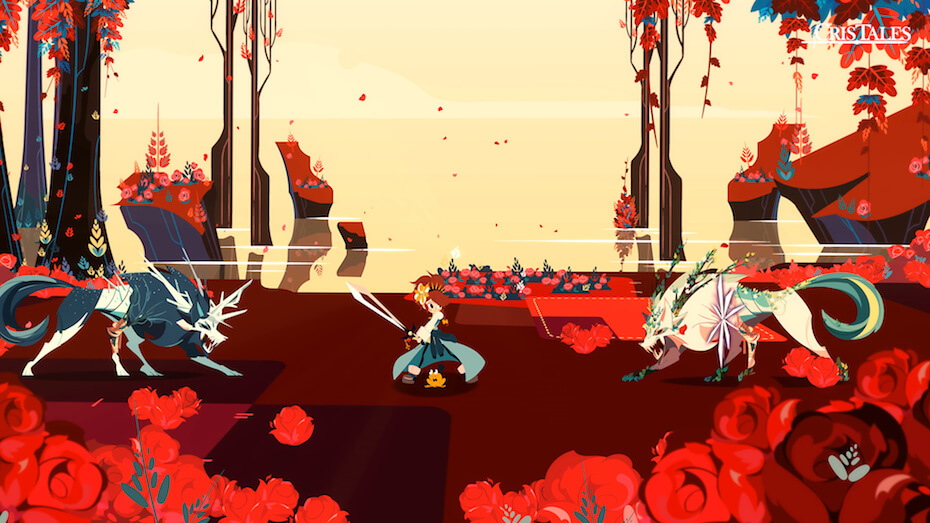 Time mechanics can also enhance your moves. For example, if you use a fire move, the enemy may become burned. Since burn damage accumulates little by little over time, you may want to send the enemy into the future, where they'll instantly be defeated by all of the damage that's added up. This opens up a lot of options for the player, giving the game a ridiculous amount of potential in terms of battle. 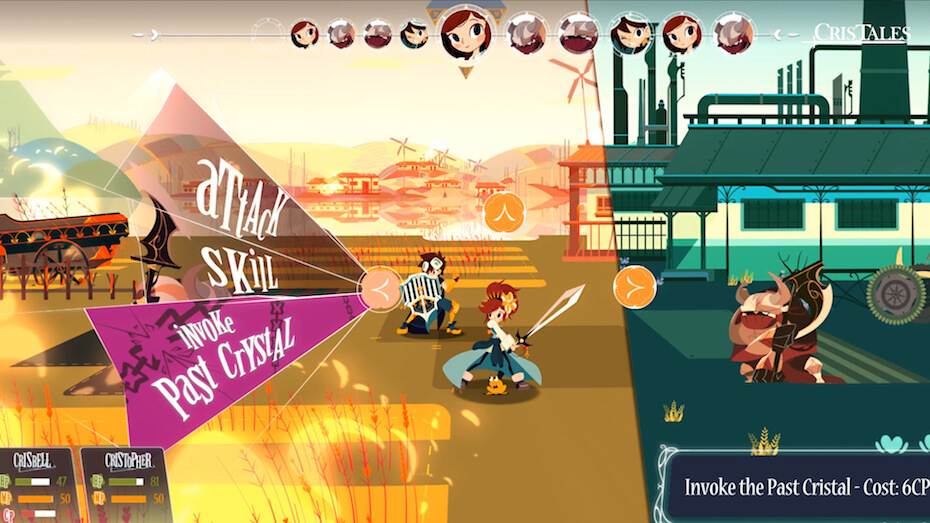 Before the demo came to a close, its creators showed us a boss battle between two characters called the Volcano Sisters. They wield an enormous shield that basically makes them impervious to all damage, but by using a water attack and then pushing the sisters into the future, they made their shield rust away, leaving them vulnerable. Even then, it seems I've only seen the tip of the iceberg in terms of what this game's time mechanics can do. 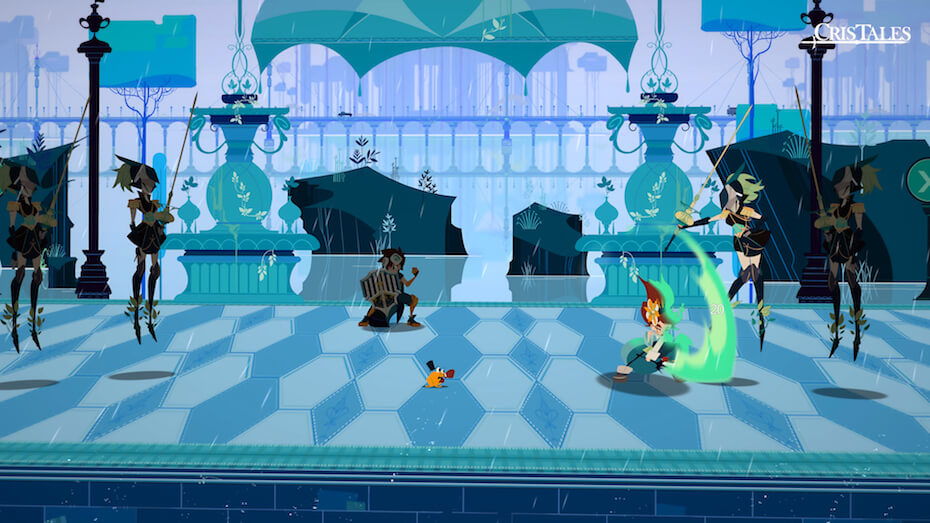 The creators of Cris Tales are from Colombia, and the country's influence is apparent throughout the game. Much of the architecture, costuming and even color schemes in the game are inspired by real people and places. Matias even happens to be based on the world's second deadliest poison frog, which is native to Colombia. 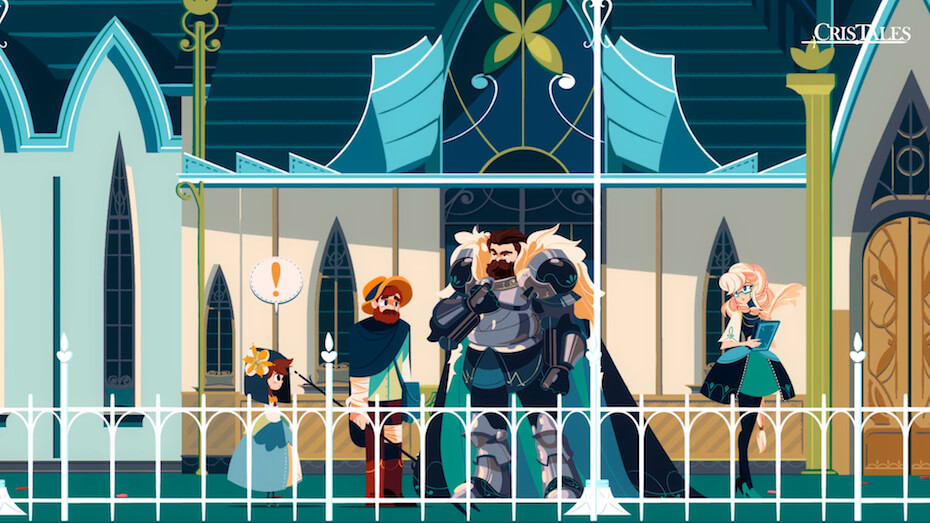 With a lot of care and attention, the makers of the game have somehow taken an incredibly complex concept and made it totally accessible. The game looks amazing, with a hand-drawn feel, and every aspect feels like a love letter to classic RPGs. It even has fully voiced-over character dialogue.

You can even play a demo of Cris Tales HERE. It will release  in 2020 on Nintendo Switch, Xbox One, PlayStation 4 and Steam. 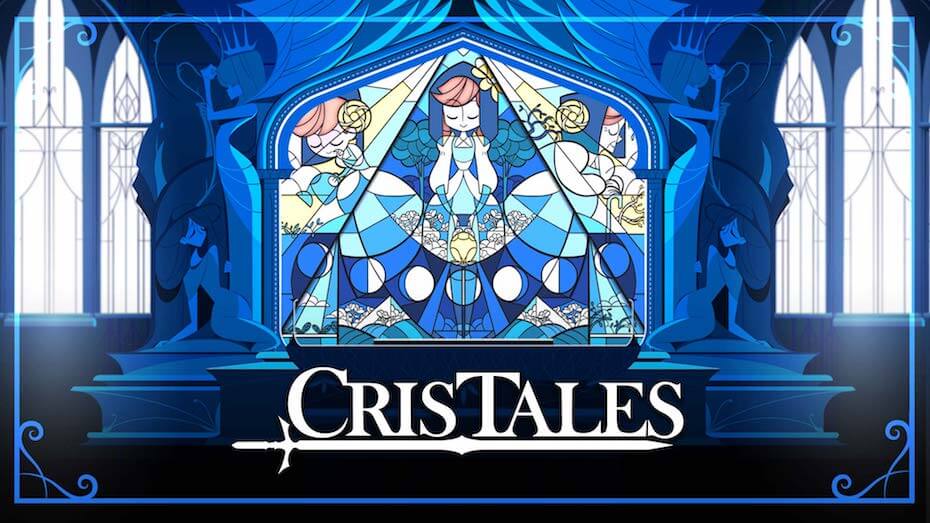 If you're all about innovative RPGs, click HERE to find out why we loved SteamWorld Quest.