Drew Justice is one of the stars of the Amazon original series Gortimer Gibbon's Life On Normal Street. The first season is available today exclusively on Amazon Prime Instant Video, and we spoke with the cast to learn all about the new show! 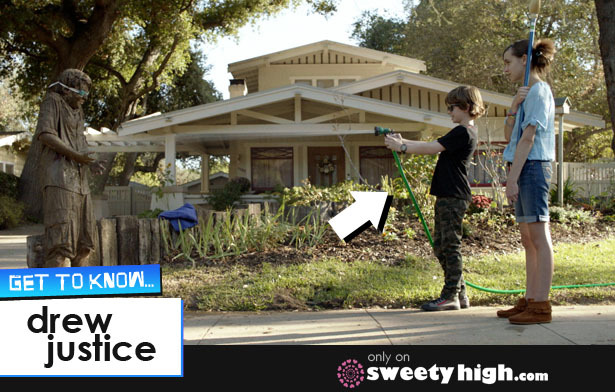 Drew told us that he first got interested in acting through the support of his future agent.

"She was always encouraging me to take an acting class," he said. "I did and I loved it."

"Ranger is Mel and Gortimer's best friend from birth," Drew explained. "He's mischievous and funny, but he can pull it together whenever he needs to."

Drew said that he and Ranger are very similar, for the most part. However, they do differ in one important way.

"The way we dress is nothing alike," he said. "He'll wear skinny jeans on 90° days, when I'll maybe wear jeans in the cold."

Gortimer Gibbon's Life On Normal Street is the first Amazon original series made for kids, but the pilot, which debuted in February, has already appealed to fans of all ages.

"I think the cool thing is that it's not just a show for kids or a show for adults," Drew said. "It's a show that the entire family can watch together."

The show's pilot has been met with acclaim from fans and critics alike.

"So far the response been really good," he said. "I can't wait for all of our supporters to see the rest of season one. I'd like to thank Amazon, all my castmates and all my crew members for making my summer awesome."

Be sure to check out our interview with Drew's costar Ashley Boettcher, and stay tuned for more from Sloane Morgan Siegel. You can also share in your excitement for the show in our community at Sweety High!