The Fastest Way to Complete Your Research Level 10 Pokédex in Pokémon Legends: Arceus

The world has never seen a Pokémon game quite like Pokémon Legends: Arceus.

The game dropped last month on the Nintendo Switch, throwing players into the past to explore the open-world Hisui region—and this time around, the goal isn't just to catch 'em all. In a pre-technology world, you're the one building your own Pokédex, so you don't just have to log each type of Pokémon, but also learn about their behavior through watching them interact with the world. The goal is to get to Research Level 10 with each and every Pokémon in the game—and we have some tips on how to do that as fast as possible. 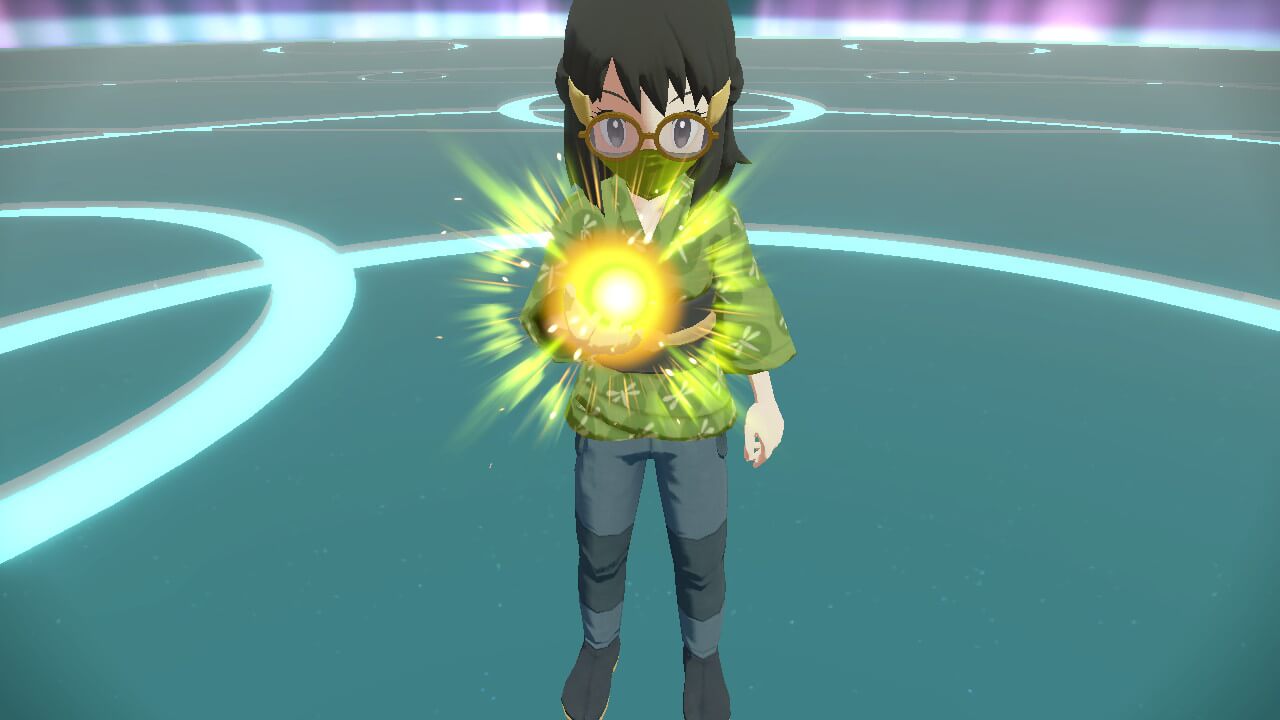 Catch 'em All (Every Time)

Of course, you can't begin to complete your Pokédex without catching one of every kind of Pokémon, so that's the best place to start. Each time you spot a Pokémon you haven't caught yet, be sure to try to throw a Poké Ball at it to add it to your team. If you can hit them from the back, so you're more likely to catch them. We also recommend trying to catch them from afar, or hidden away in the grass, so you don't scare away shy Pokémon, or trigger a fight response in more aggressive Pokémon.

But you shouldn't necessarily stop after just one. With very few exceptions, catching multiples of Pokémon will help you complete their research tasks faster. And of course, catching Pokémon constantly is going to use up a lot of Poké Balls, so we also recommend consistently farming from trees and crystal formations, as well as collecting Iron Chunks and more in order to craft better catching item. We also like carrying along some Sticky Bombs for stunning aggressive Pokémon—especially the ones who appear in Space-Time Distortions, which can get extra aggressive. Plus, the more you catch, the more money you'll earn, which can be invested back into the items you love using most for the highest success. As you play and complete the game's main campaign, the next steps will go a lot faster if you're catching Pokémon left and right. 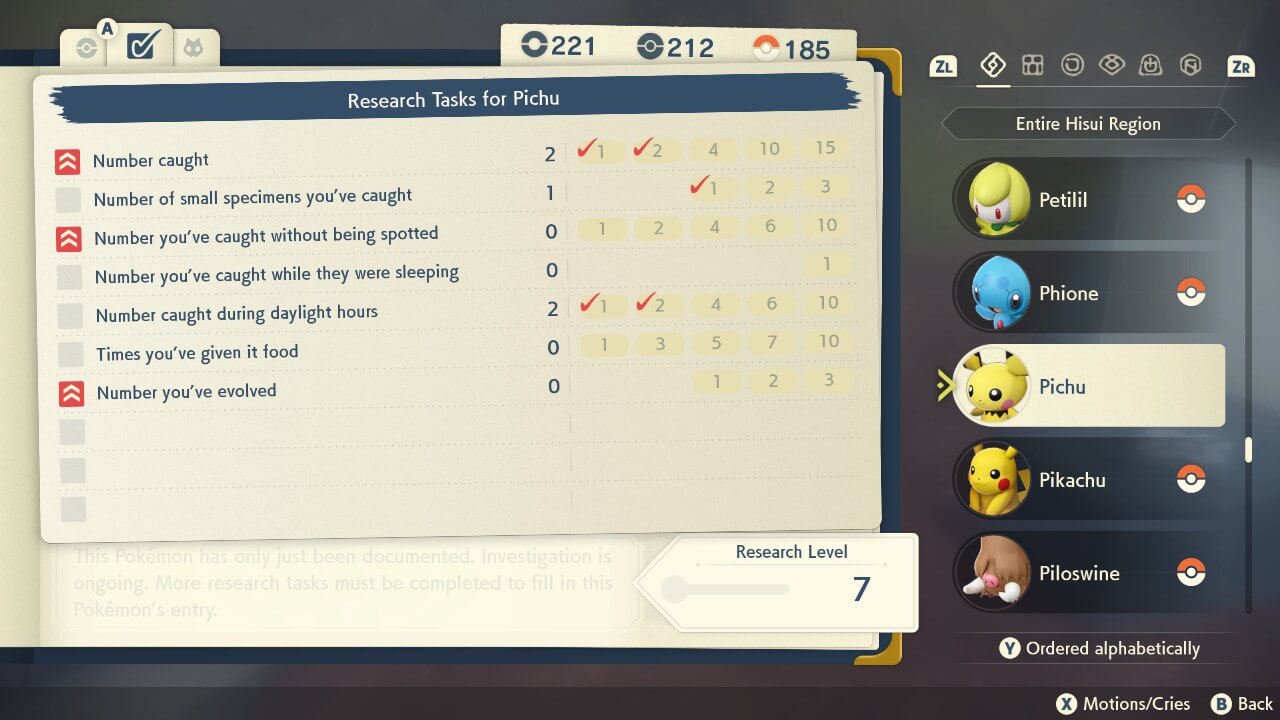 Every Pokémon's research tasks are different, so take a look at their list before you start building them up. You can get points for catching certain numbers of each Pokémon, catching light or heavy specimens, catching them without being spotted, defeating certain numbers, defeating Pokémon with specific move types, seeing them use specific attacks, giving them food, seeing them use agile- or strong-style moves, evolving them and more—it's all about that variation! Also remember not to evolve Pokémon until you've maxed out their research, unless you can easily catch another one of that species. Even more importantly, take a look to the checkboxes on the left for the tasks highlighted in red. These will earn you double points, to get to Level 10 much faster.

Also consider what's easiest given the Pokémon you're researching. Most of the time, that will be times you've seen Pokémon using specific moves, or agile and strong moves, because you can simply take out that Pokémon once you've caught it, go to the Obsidian Fieldlands and use those moves on the low-level Pokémon you find there. 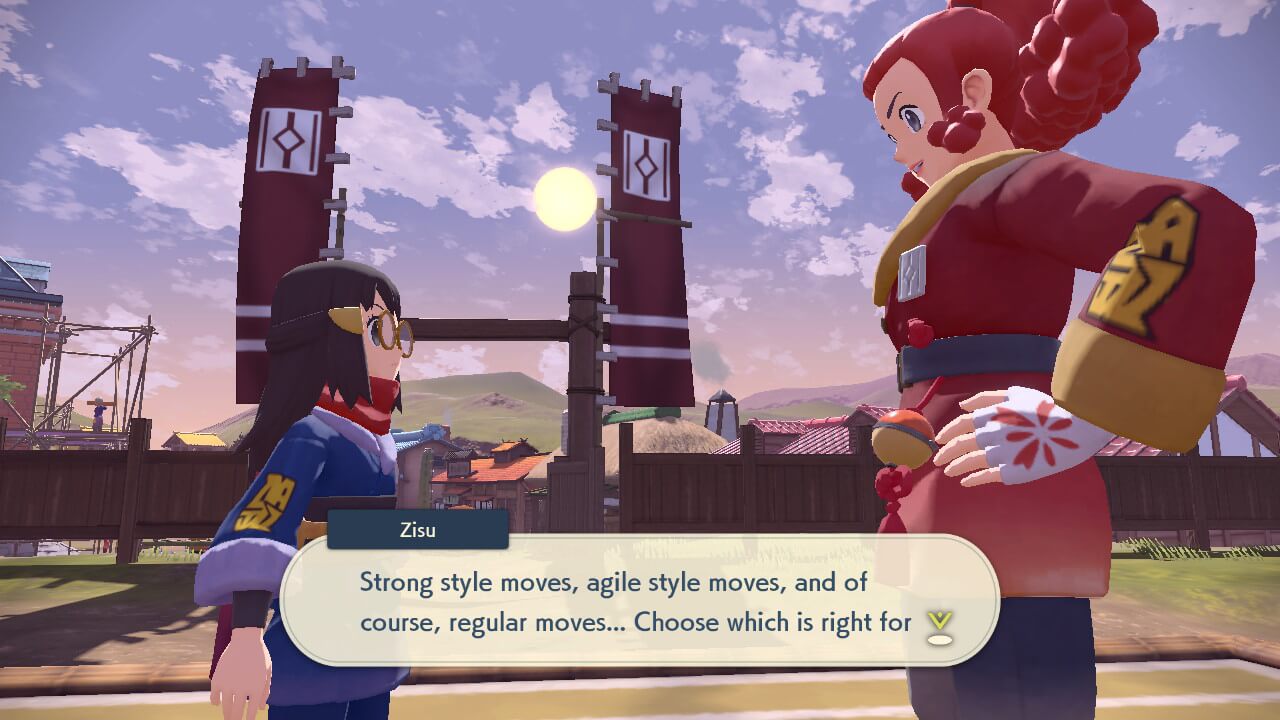 You'll also want to take advantage of Pokémon outbreaks. Look at their research tasks to see if it's more ideal to catch or K.O. the Pokémon, and if feeding them Oran Berries will also help you finish your tasks. In our playthrough, we mostly went through the list in alphabetical order to complete it, but you can organize your own method in any way you like.

Kill Multiple Birds With One Stone

Whenever possible, focus on research tasks that can be completed together. For example, a single catch can count for a point under "number caught," "number of light/heavy specimens you've caught" and "number you've caught without being spotted" all at once, if you play your cards right.

If you're going for times you've seen moves, and times you've seen agile/strong moves, it's also ideal to use higher-level Pokémon with mastered moves. And if, for example, you need to use a fairy-type move multiple times for a research task, see if you can locate a Pokémon with a research task that requires you to defeat them with a fairy-type move. The more points you're collecting concurrently, the less time you'll spend  on each task.

Pokémon evolve in all kinds of ways, and it's easy to waste time if you assume that your Pokémon will evolve once it reaches a certain level. If you've been playing the games for ages, like we have, you may already know a lot of these Pokémon and how they evolve, but if you're new to the series, there's no shame in looking them up online. While some evolve by leveling, others require certain items to level up. They may also need to be exposed to this item under unique conditions. Others evolve knowing certain moves, or using moves in a certain style a set amount of times.

Some Pokémon also evolve through maxing out friendship. Friendship can be increased in a number of ways, from harvesting resources from trees and crystals to winning battles and being fed experience candies, while bitter healing items and fainting will make them less friendly with you. Also know that many Pokémon that evolve through unique moves will also have clues about how they evolve in their research tasks, so if you feel like it's cheating to look up how they evolve, check out their unique movesets and see if you can figure anything out there. 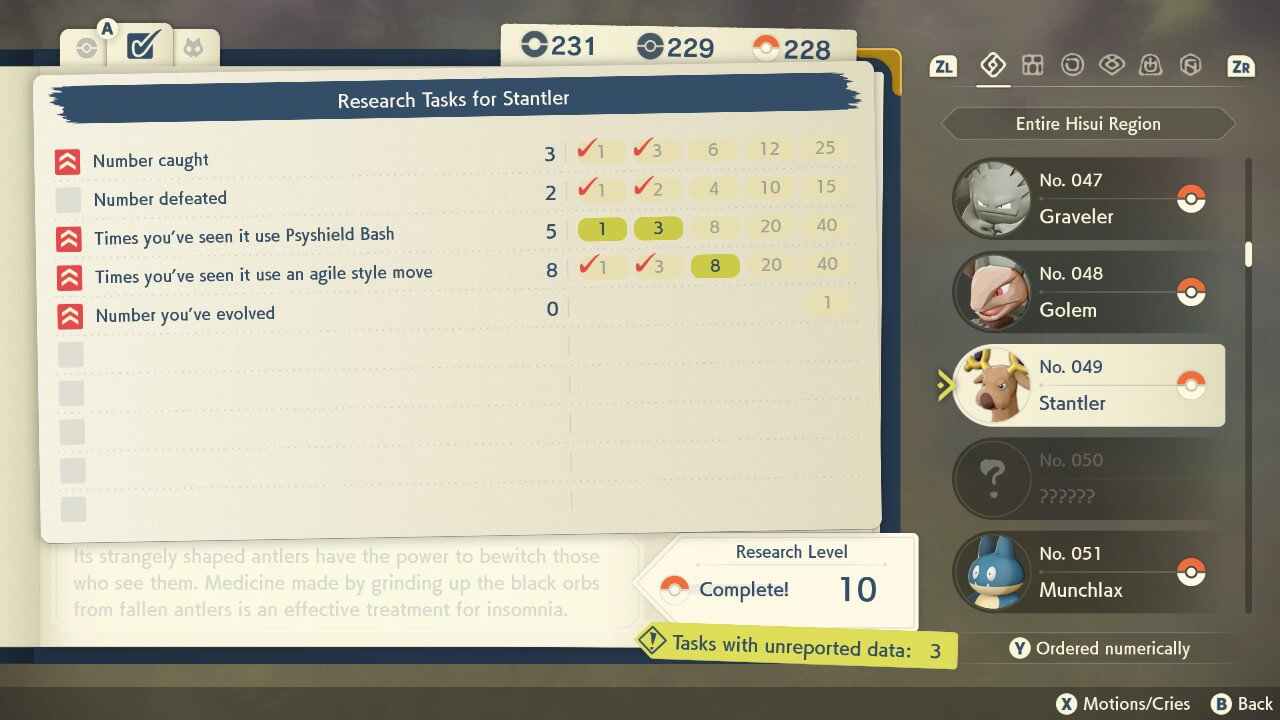 Collect Those Wisps and Catch Unowns!

To finish your Pokédex, you'll need to catch 28 versions of the letter Pokémon Unown, as well as locate a special Pokémon by locating its 107 purple wisps hidden throughout the game. Both of these are pretty massive tasks, but they become much easier if you keep an eye out as you adventure and collect them as you go.

Once you've collected an Unown, a special area is added to your Pokédex, with clues on where to find all 28 of them. Some of the hints are a bit cryptic, but they'll help a lot in tracking them all down. As for the wisps, you can also chat with Vessa in Jubilife Village to find out how many remain in each area. After spending hours on these hunts, we just looked up where they were, and we don't regret a thing.

Always Stick Around for Space-Time Distortions

Space-time distortions can be pretty scary, especially before your Pokémon reach high levels, but they're worth investigating for rare Pokémon that can't appear anywhere else in the game. Pokémon from other regions, as well as Pokémon from the past and future, will appear here. However, these Pokémon tend to be extremely aggressive, so we recommend moving swiftly once a distortion appears, and carrying plenty of Sticky Bombs so that you can easily stun Pokémon and catch them, rather than get caught in a battle with multiple high-leveled monsters.

Keep Your Goal in Mind

So why go through all of the trouble of getting completing the Research Level 10 Pokédex, anyway? Well, in addition to making the kindly Professor Laventon very proud, getting Research Level 10 for every Pokémon in the game will grant you the Shiny Charm. 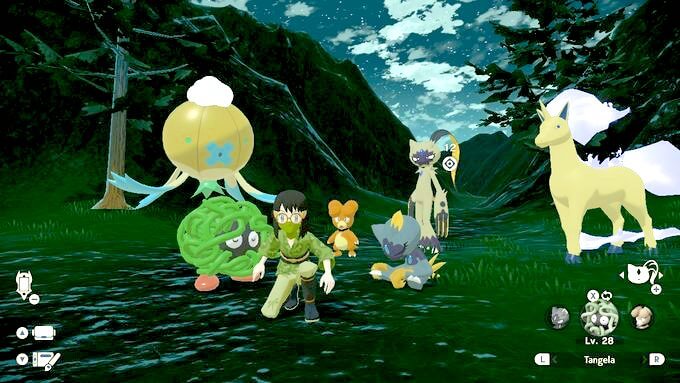 The Shiny Charm makes it more likely that shiny Pokémon will appear. These Pokémon have unique color variations that definitely make them stick out from the crowd, but at a base one in 4069 chance, they're extremely rare. The Shiny Charm, stacked with Research Level 10 for each Pokémon (which doubles your chances), makes them about five times more likely to appear—but that's not all. Mass outbreaks actually increase your chances of finding a shiny 26-fold. Put that all together, and once you get the Shiny Charm, Pokémon in mass outbreaks about a one in 137 chance of being shiny. That's extremely high for these rare Pokémon, and finding them is always well-worth the effort. Just look at our collection to see what we mean. 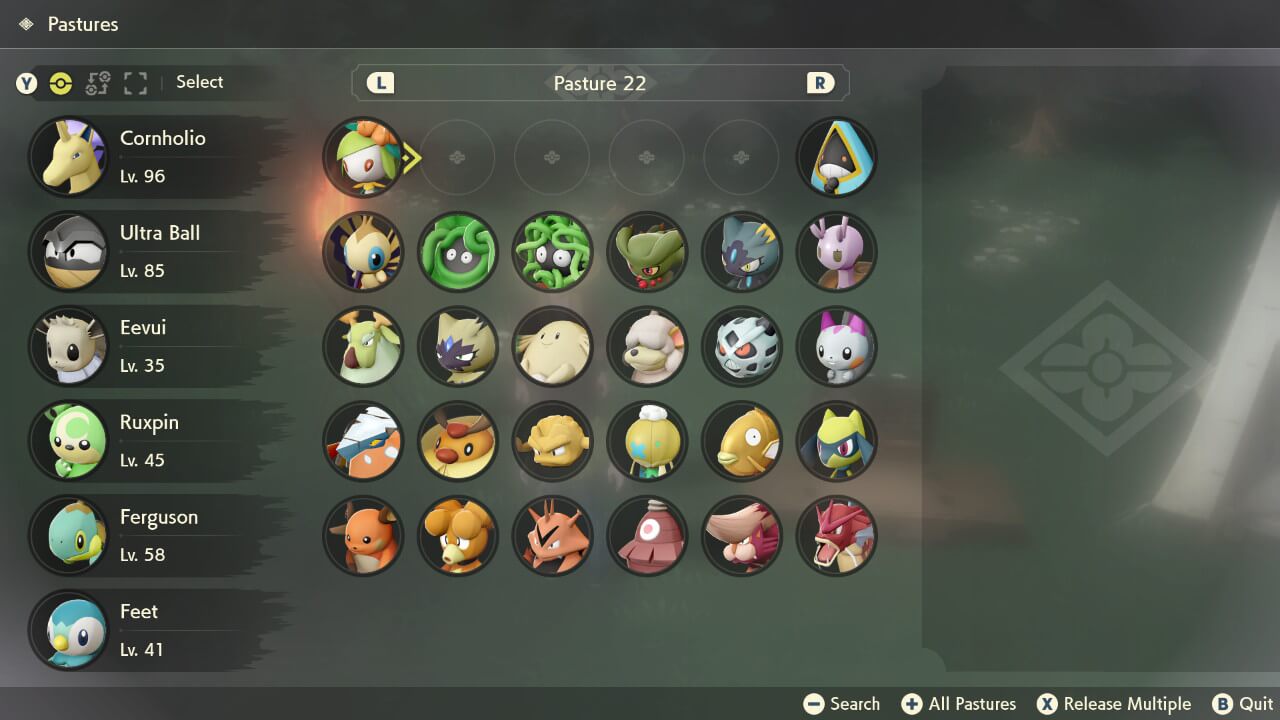 Can't get enough of the game? Click HERE to find out which Pokémon from the new game fits you best, based on your zodiac sign.