These Vegan Holiday Roasts Look Amazing—But How Do They Really Taste?

While I've always been an omnivore, I do occasionally try to forego animal-based foods in favor of vegan ones.

I appreciate that there are health and environmental benefits to avoiding meat, dairy and eggs, and it feels good to support vegan friends and family members and their dietary restrictions. Plus, some vegan alternatives taste even better than the real thing.

So when I was contacted by someone at Field Roast to try out their plant-based holiday offerings, I thought it'd be an interesting opportunity to expand my palate and see if it'd be something I'd ever bring to a real holiday dinner. I happily agreed to roast them up and see how they really taste.

Field Roast is a company that specializes in meat and cheese-like foods made entirely with plant-based ingredients, such as grains, veggies and beans. The idea is to stay as close to a classic recipe as possible, but by subbing out any animal-based products with vegan ones.

And for the holiday season, the company also features a few special roasts packed with seasonal flavors. Their Hazelnut Cranberry Roast En Croute consists of hazelnut and barley "meat" filled with smoked apple sage sausage stuffing, candied ginger and cranberry,  which is then wrapped up in a layer of puff pastry. 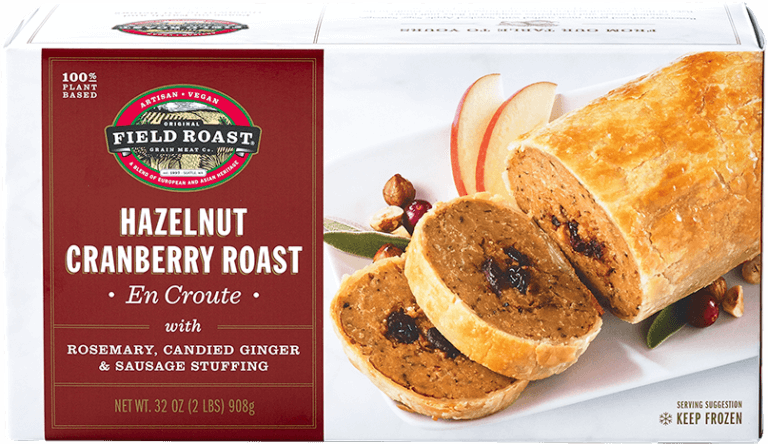 For a slightly more traditional holiday dish, they also have a Celebration Roast. The two-pound roast's "meat"  is seasoned with sage, garlic and lemon juice and stuffed with bread stuffing, cranberries and butternut squash. It also comes with a vegan porcini mushroom gravy perfect for drizzling over the roast. 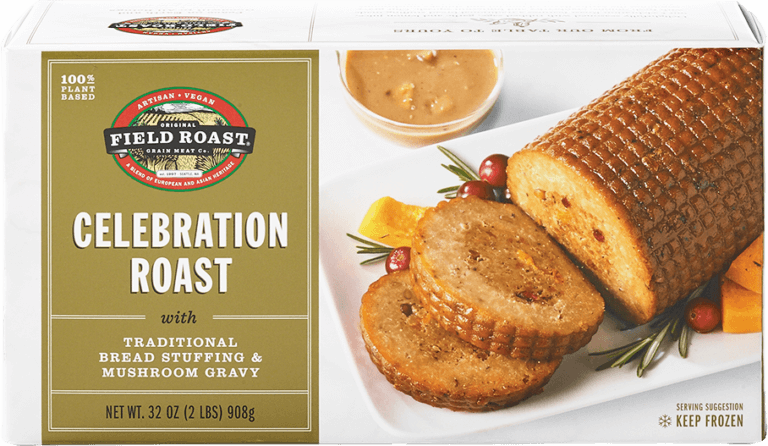 Both roasts looked pretty delicious on the packaging, but how would they really work out? I let them thaw in the fridge for a day and set aside a weekend morning to pop them in the oven and find out for myself.

I was intrigued by the Hazelnut Cranberry Roast, so that one was the first I prepped. Based on the name, I wasn't quite sure if I was supposed to expect something sweet and dessert-like or something savory, and I was eager to find out. When I took it out of its box, it slightly resembled a large burrito. 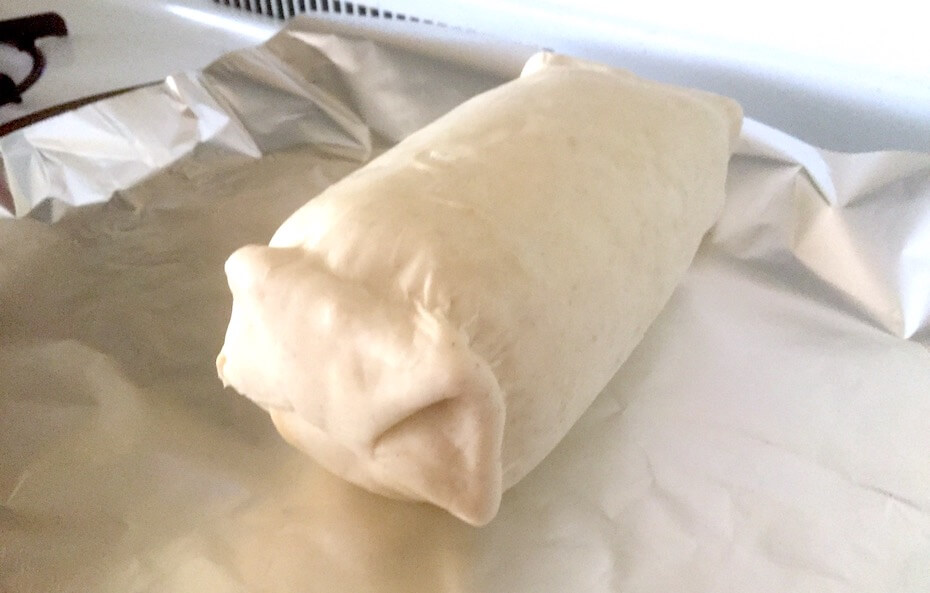 Prep was really simple. I simply had to heat the oven to 400° and loosely cover the puff pastry parcel with tin foil before putting it in the oven. 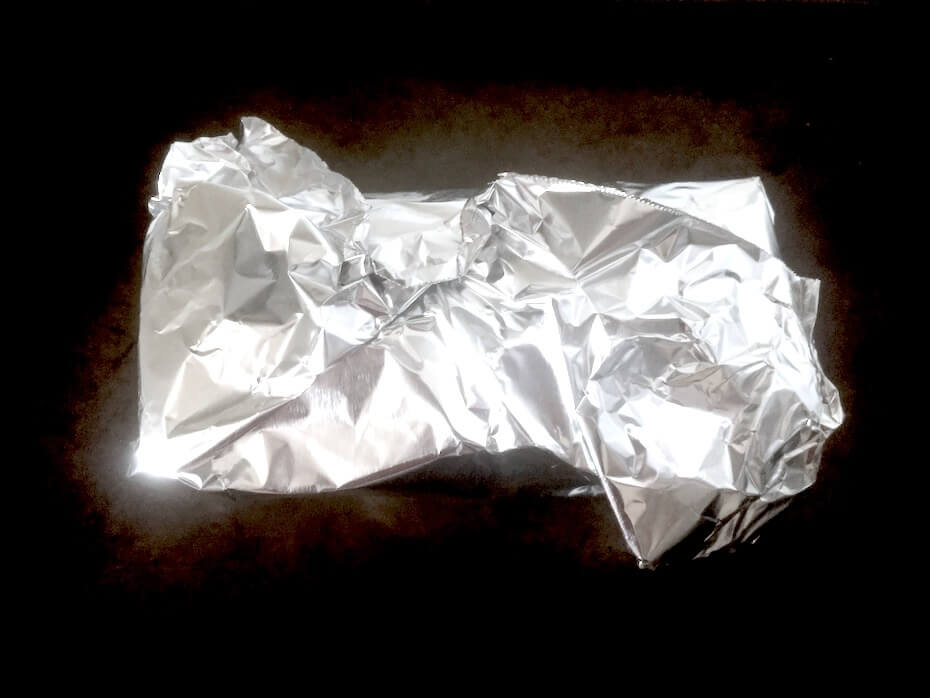 After about 45 minutes, I briefly took it out of the oven to remove the foil wrap. I was happy to see that the bottom of the roast already had a golden, crispy glow to it. I popped the bare roast back into the oven for an additional 15 minutes before it was ready to rest. I thought the flaky crust looked amazing and I was ready to dig in, but I had the patience to follow the instructions and wait another 15 minutes before cutting in. 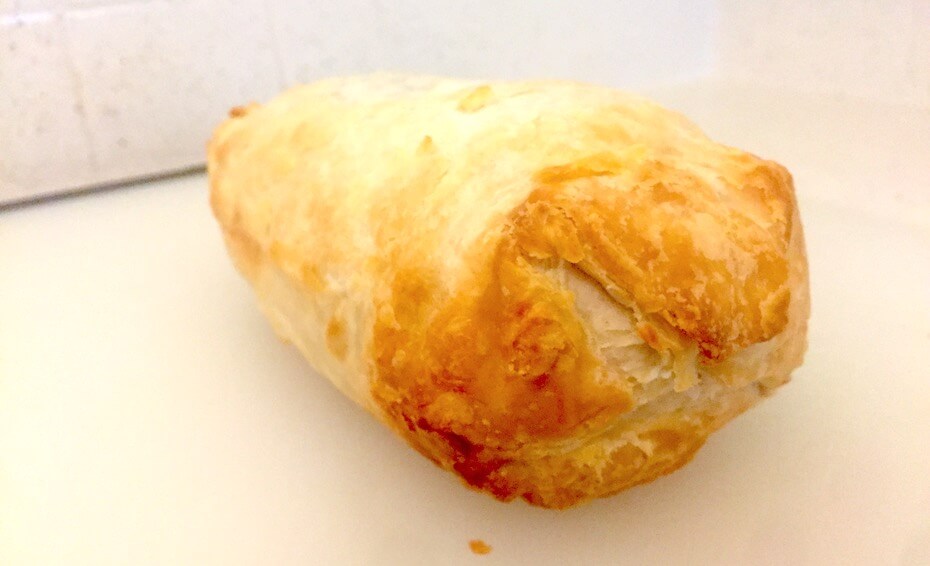 When I did so, the pastry was crisp and the meaty roast cut through like meatloaf. Of course, the most important thing was the taste. My first thought was that I was surprised by how good the puff pastry was. It's really tough to get a great flake in pastry without butter, but Field Roast managed to do it. 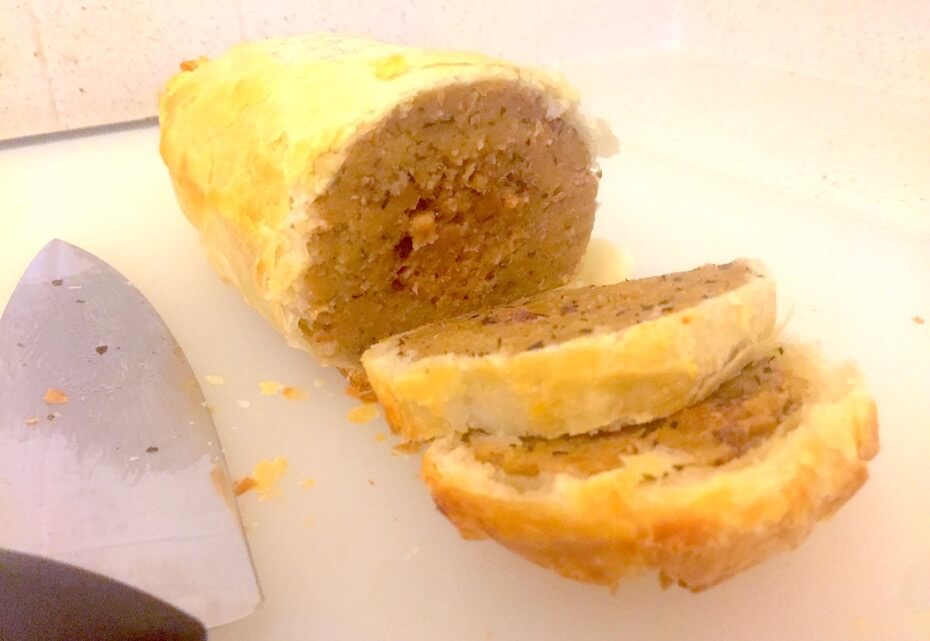 The inside was pretty tasty, too—though I was a little saddened to find out it wasn't at all like a dessert. Though I wouldn't have mistaken the flavor for the "real thing," I thought the savory flavors and texture were quite close, and I finished a whole slice without trouble. I especially liked biting into sweet, tangy bits of cranberry (even if it wasn't quite as cranberry-packed as it appeared on the box). Still, the pastry was the star of the show, and my favorite pieces wound up being the crispy ends.

Making the Celebration Roast was just as straightforward. This time, I lowered the oven heat to 350°, and coated the roast and the pan in a thin layer of olive oil before I covered it with foil and placed it in the oven with a couple tablespoons of water. 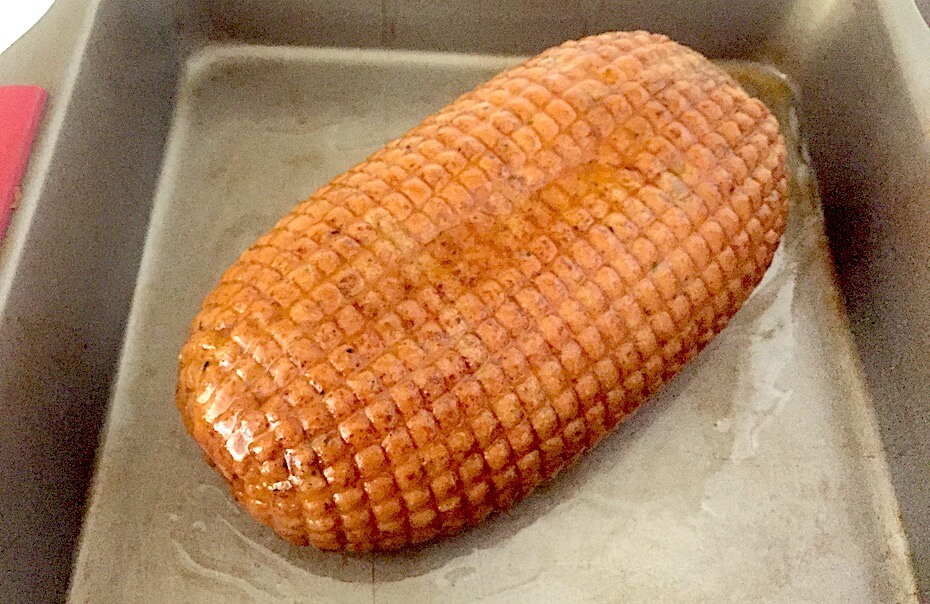 45 minutes later I took it out for a moment to remove the foil, and it went right back in for another 15 minutes. While that happened, I got to working on the mushroom gravy. All I had to do was mix a packet of brown powder with a couple cups of water in a saucepan and cooked it on medium-high heat for a few minutes. Before I knew it, the liquid condensed into a thick gravy. 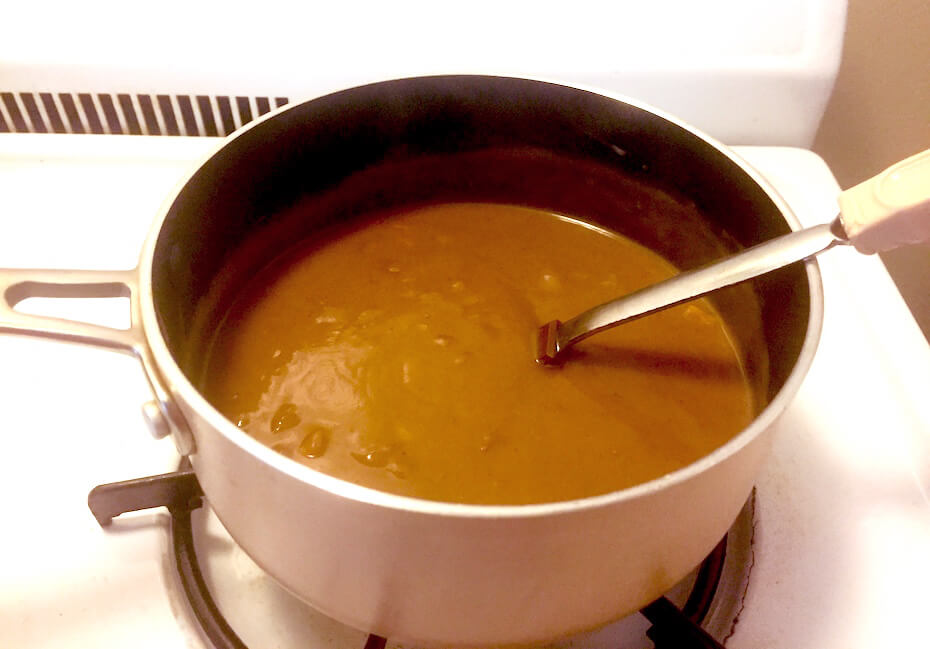 When the 15 minutes were up, I was thrilled that I didn't have to wait for it to cool or rest to slice it up. It looked super toasty and ready to go. 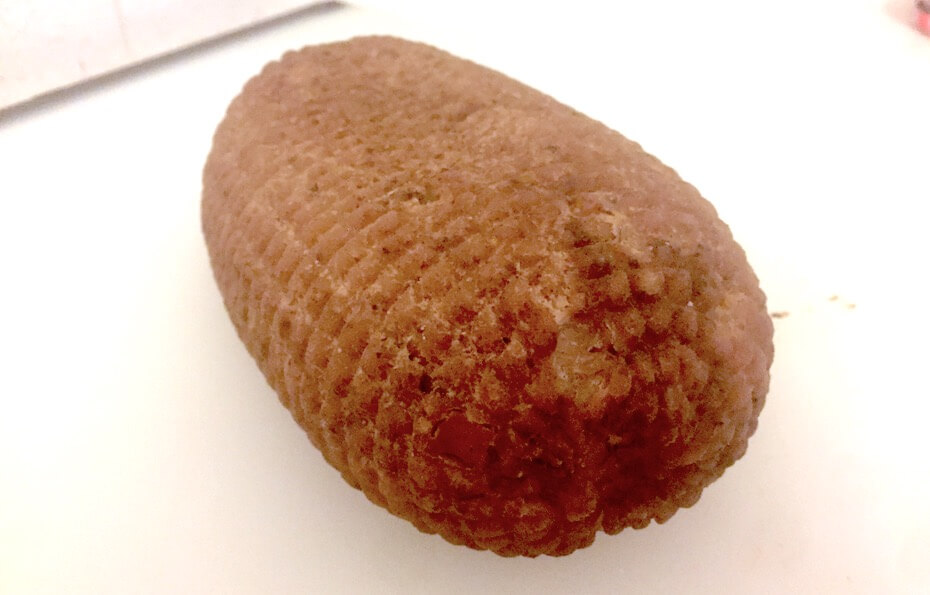 Though the stuffing layer in the center wasn't as clear as it was on the box, it still looked and smelled incredible. Again, it didn't necessarily taste like any roast I'd ever had, but the blend of seasonings made it a close approximation of something meaty and delicious. I especially liked the bready stuffing in the center—and the gravy was delicious. I wound up saving the bulk of it for later, because I'd love to have it drizzled over homemade mashed potatoes. If they ever start selling that gravy on its own, I'll be sure to stock up. 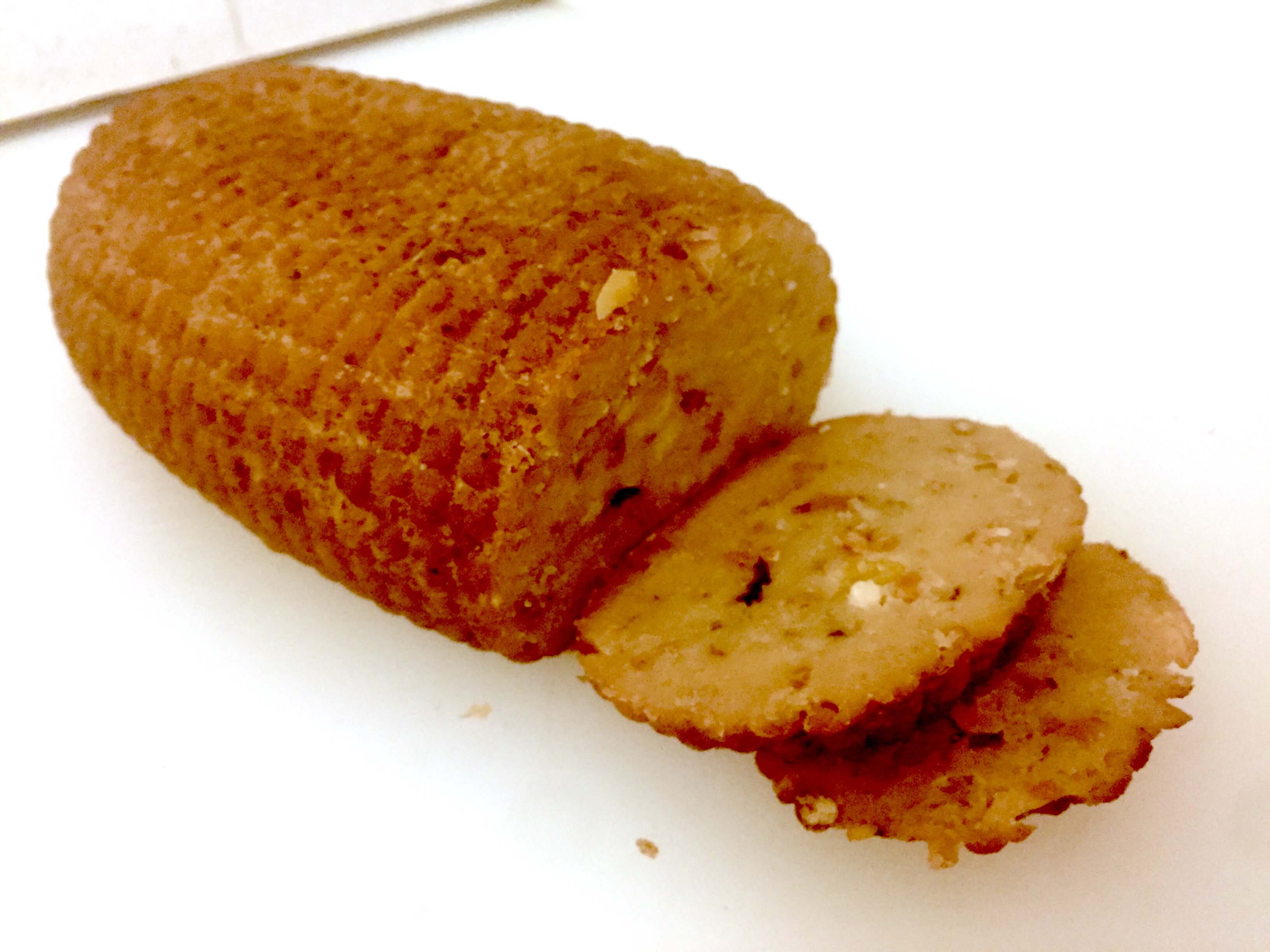 Field Roast won't necessarily replace holiday classics for the carnivores in your life, but your vegan family and friends will love it, and the more adventurous eaters who are willing to give it a try will be really pleasantly surprised. While my favorite was the En Croute, I think both were tasty and satisfying, and even more so with a healthy dollop of the porcini gravy on top. I'd be happy to serve either as one of the dishes in a big holiday lineup, and the fact it's vegan is just an added bonus.

You can click HERE to find out if you can find Field Roast products at a grocer near you.

Trying to be more eco-conscious this winter? Click HERE for easy recipes of your favorite vegan holiday dishes.