We all have our fears. Mine happen to be snakes.

For as long as I can remember, I've always been utterly terrified by the reptiles.

All throughout my school years, I used to cover pictures of the creatures in my textbooks with Post-it Notes, because the mere sight of them would cause me to panic.

Because I've been on somewhat of a self-improvement kick this year with taking up meditation and following advice from a self-help book, I decided 2017 would be the year I overcome my crippling fear of snakes.

I figured what better way to do this than by visiting a reptile room? So I reached out to the lovely people at The Reptile Zoo in Fountain Valley, California, to see if they could help me. Sure enough, they were more than willing to aid me in conquering my fear. 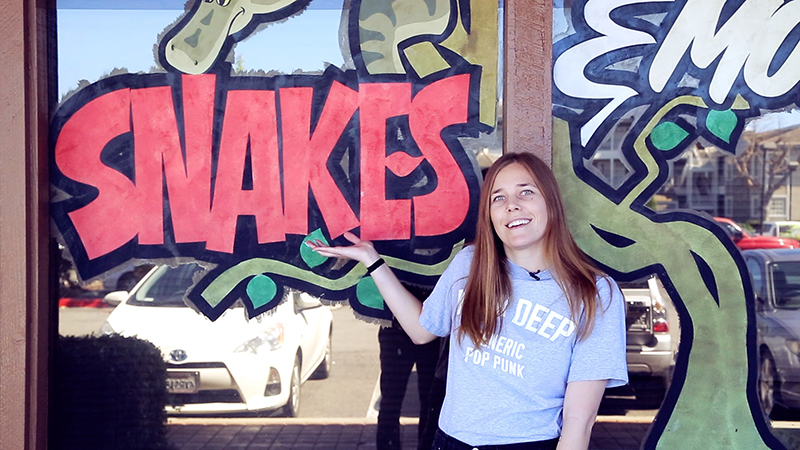 (Lol at my crazy eyes)

When I pulled up to the reptile-filled store, I didn't even want to get out of my car. My palms were sweaty and I had a huge knot in the pit of my stomach. Unfortunately, there was no turning back now.

As I walked through the doors, I was terrified a slithery little snake was going to attack me out of nowhere. I was on edge to say the least.

Once inside, I was greeted by The Reptile Zoo's owner Jay Brewer who assured me that if anyone could help me vanquish my fear of snakes, it would be him.

After convincing me I was in good hands, Jay and I walked over to a large exhibit holding four massive yellow pythons. He immediately unlocked the sturdy glass enclosing and I freaked out. I knew there was no way I could dive right into holding—let alone touching—one of these enormous reptiles. 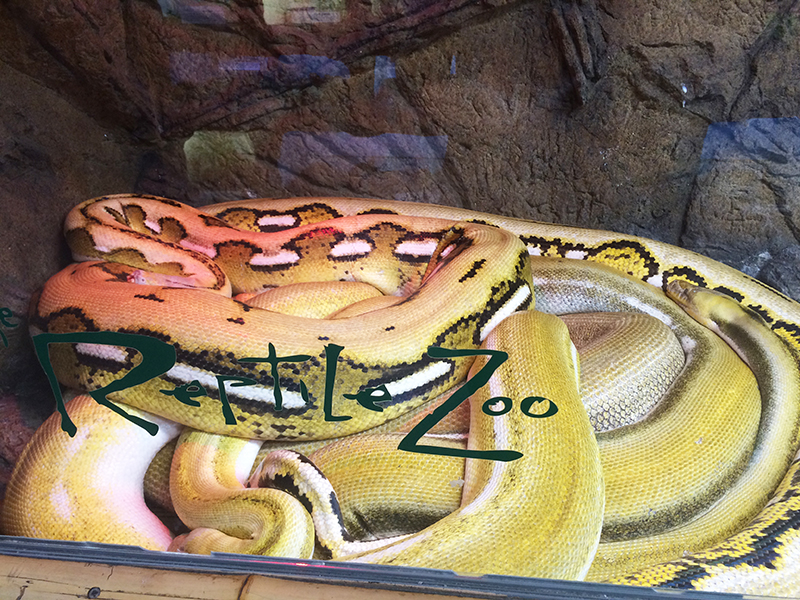 Taking note of my extreme hesitation, Jay decided it'd be best to start me off with a much smaller snake. He brought over a small, gorgeously-patterned ball python. I hadn't been this close to a snake in my life. And though it was tiny and kind of cute, I was still in panic mode. I wanted to get the heck out of this situation, but I needed to face my fear. Thanks to Jay's words of encouragement, I was able to muster up enough courage to touch the petite creature. 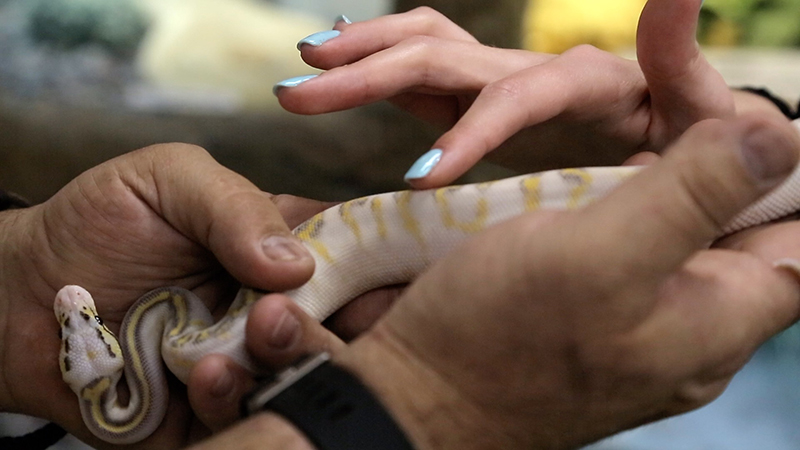 (Don't let this picture fool you, I was shaking like a leaf running my finger across its scales)

And you know what? It wasn't as bad as I thought! But then things escalated quickly when Jay figured it was time for me to hold a snake.

Though my fear of these creatures had slightly decreased after petting one, I was nowhere near ready to hold one.

Jay put the small ball python away and walked over to an enclosing which held two medium-sized ball pythons. He assured me that these two snakes were perfectly harmless, when I asked if they'd attack me. Apparently these two reptiles were very used to being held by humans. Jay said they were more like dogs than snakes, but I wasn't fully convinced. 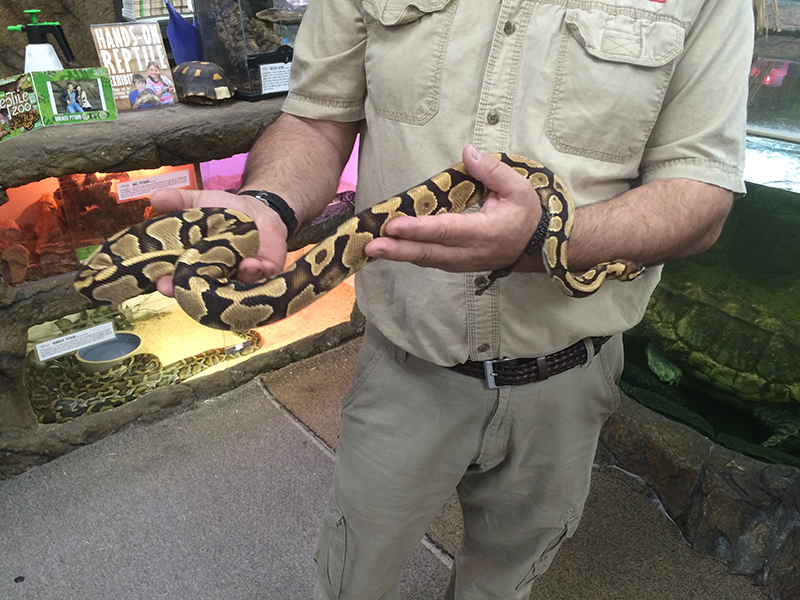 Eventually I was able to comfortably pet the snake. Then Jay said I had to hold it. He was right, so I sat down on the little bench, held my hands out and watched as Jay placed the snake in them.

It was unsettling at first, but once I got used to the snake wriggling around in my arms, I was A-OK. 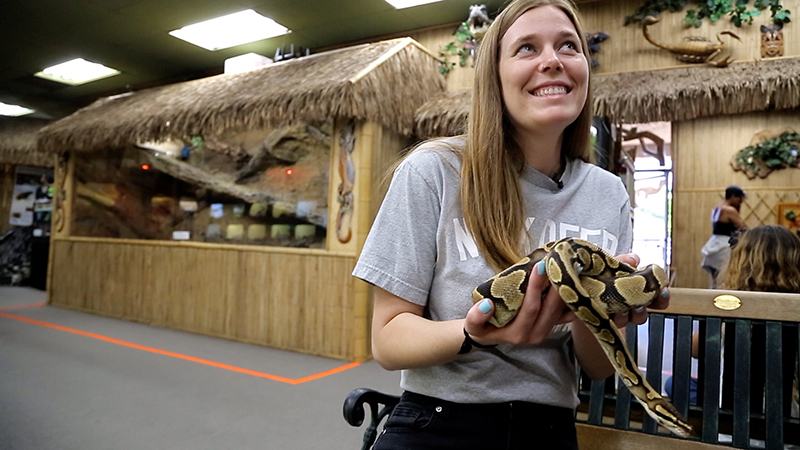 (Kind of reminds me of my exes…)

Jay noticed I was more relaxed and said it was time for me to drape the snake around my neck. That idea did not sit well with me, but I just went for it. I made Jay hold the head, because I did not want to snake slithering around my face. By the looks of this photo, you can tell how distressed I was over this moment. 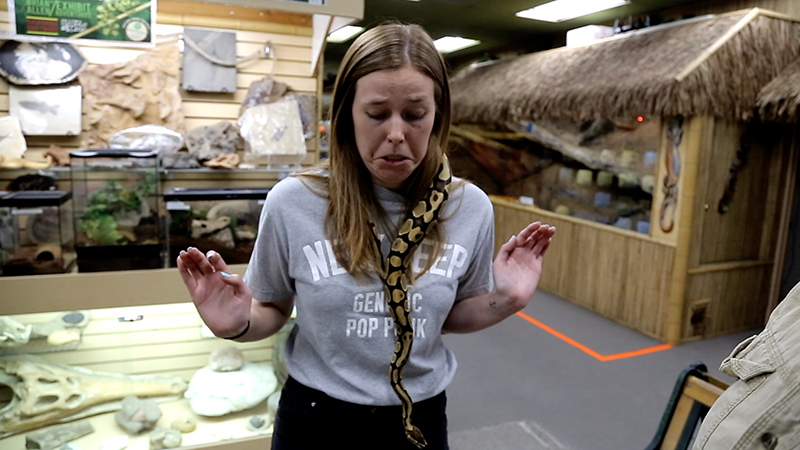 Jay then took him off my neck and let me hold him for a little while longer. I then handed him off to Jay and said au revoir to my new friends at The Reptile Zoo.

I'm super proud of myself for mingling so well with the reptiles I once entirely loathed. Snakes still freak me out a bit, but I can definitely tolerate these guys way better than I ever imagined I'd be able to. 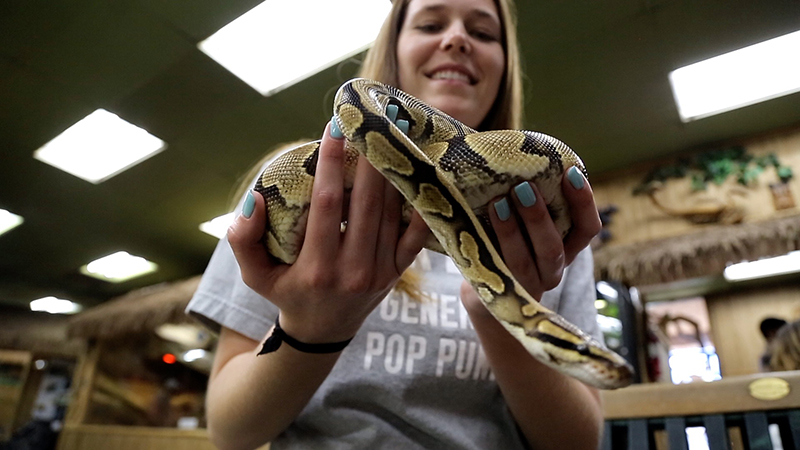 Moral of the story—you can and you should overcome your fears.

Honestly after my experience, it was as if this huge weight had been lifted off my shoulders. I felt indestructible and as though I could accomplish anything I set my mind to in that moment. It was a fleeting feeling for sure, but a reminder that my fears aren't something I should let hold me back from living life.

Life's short, go out and overcome your fears! I promise, it's not as difficult as it seems.

While we're on the subject of fears, do you happen to have one of THESE common phobias?