Can a Rose Quartz-Infused Water Bottle Really Make Me a Better Communicator?

While a few of my Sweety High colleagues are well-versed in the power of crystals, I haven't experimented with them much.

When I first spied Glacce's stunning crystal-infused water bottles, I was struck by how they look before I understood the importance of the stone inside. Curious, I reached out to the company, who kindly offered me a bottle to try for myself.

Glacce doesn't just make cute crystal water bottles so you can post them on Instagram—though they're great for that, too. Instead, they formed as an easy method for creating crystal elixirs on the go. When a crystal and water make contact, the water is revitalized by the energy of the crystal, and the resulting elixir takes on that crystal's properties (if you believe in that kind of thing). 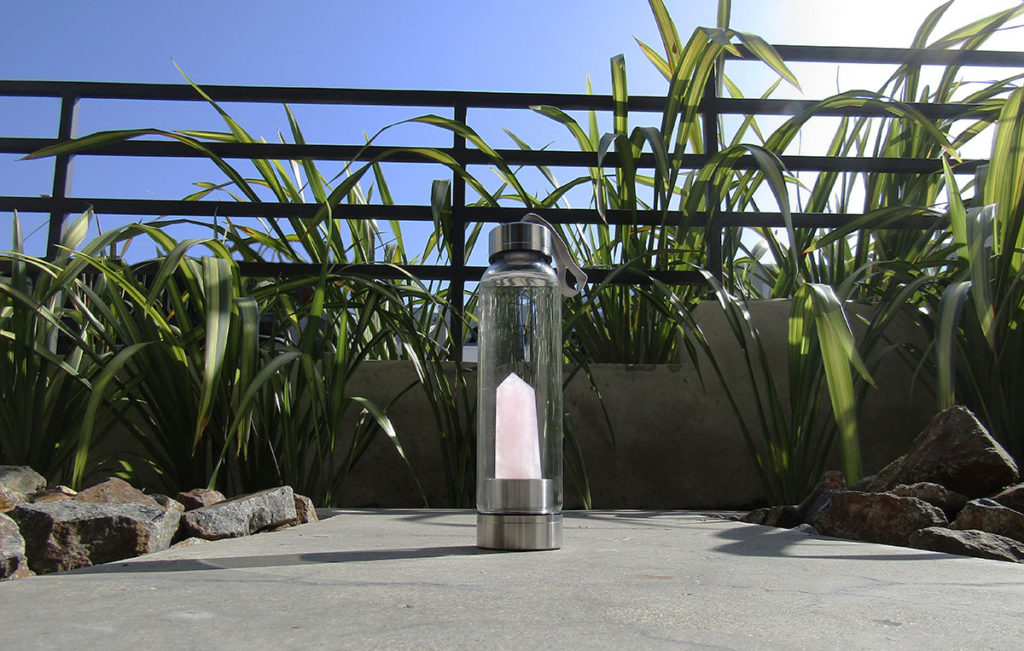 The bottles consist of a stainless steel lid with, a glass bottle and a stainless steel base with the crystal firmly affixed within. After the glass is snugly screwed onto the base, the bottle is filled with water to create the elixir.

I was sent a Glacce bottle with a rose quartz crystal inside. It's meant to encourage love, beauty, forgiveness and presence. It's also said to help people become better communicators and allow them to feel safe in whatever environments they're in. The crystal elixir it provides is intended to help you let go of what's bothering you, be more forgiving of yourself and others, and be open to giving as well as receiving love. 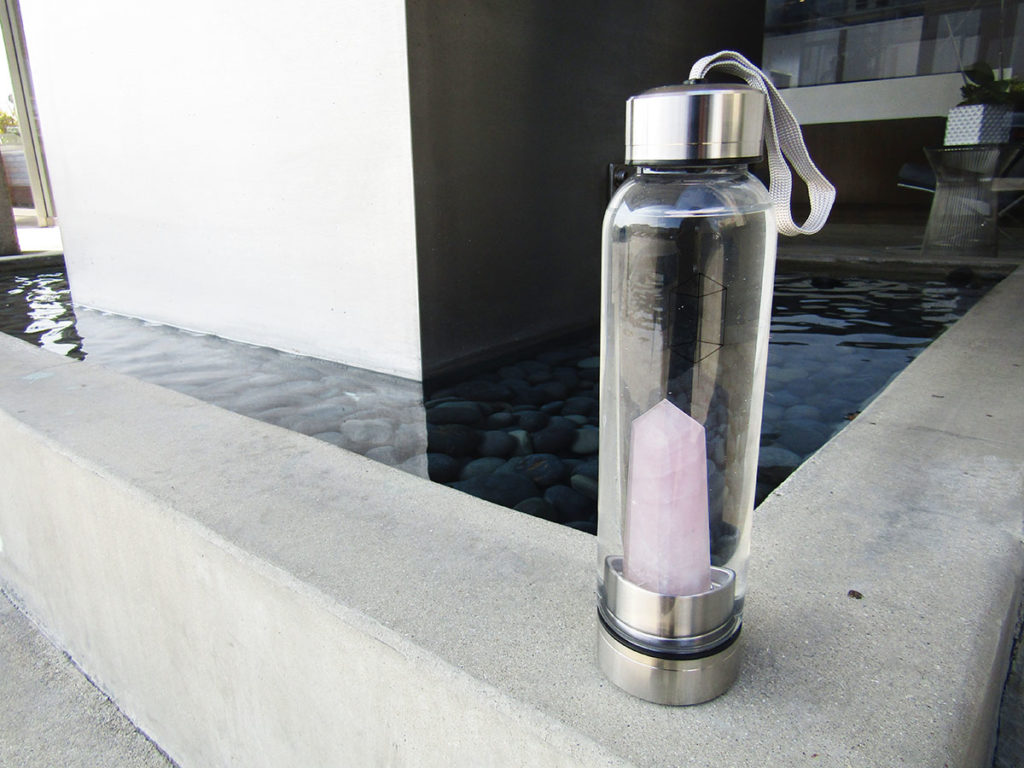 But Glacce doesn't just sell a rose quartz bottle. They also offer energy-cleansing clear quartz, clarity and calm-producing amethyst, grounding smoky quartz and truth and awareness-bearing black obsidian. They each have different price points ranging from $80 to $100. They chose these crystals not just for their healing benefits, but also because it's safe to drink water making direct contact with these hard stones.

All of the benefits of rose quartz sounded super promising, but I couldn't be sure it worked until I gave it a try. I put my bottle together and filled it with water to make my first elixir.

The first thing I noticed was that the brim of the bottle is pretty thin. I have a water-filtering pitcher at home, and so far it's been nearly impossible to fill the bottle without at least some of it dribbling over the side and making a mess. I've gotten used to wiping down the bottle after filling it, but it's a bit of a hassle.

But before I started sipping, I decided it would be a good idea to cleanse the stones—not with soap and water, but in a spiritual sense. Glacce recommends bathing the crystal in a creek or allowing the crystal to bask in moonlight. I simply left mine near an open window on a moon-illuminated night to empower my rose quartz. 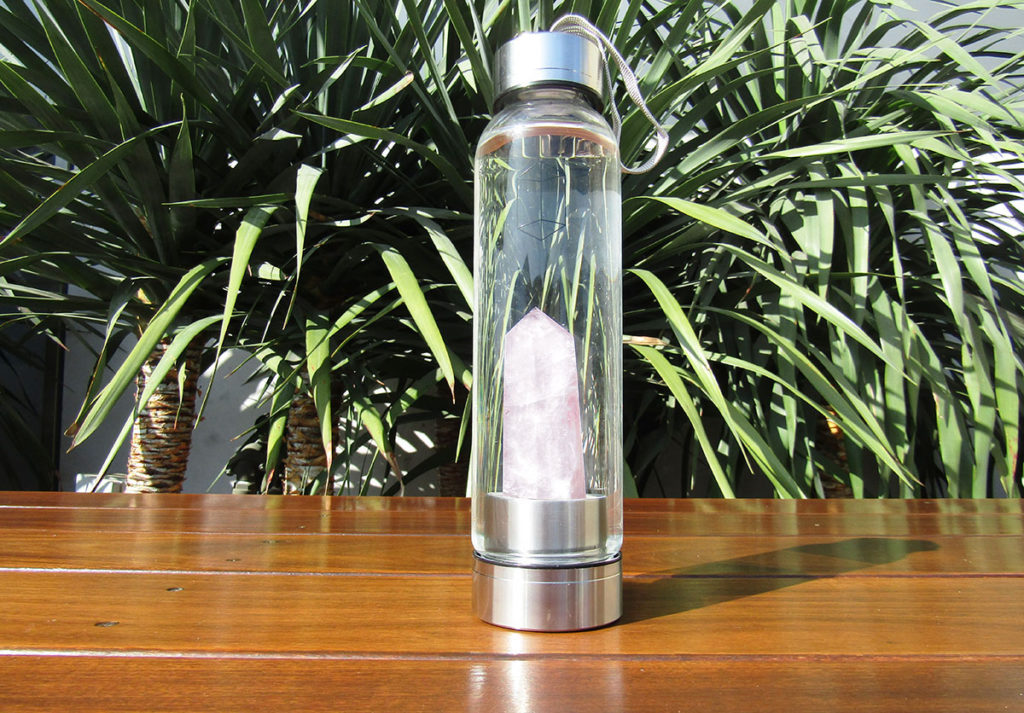 I took my first sips of elixir the following morning. While I didn't necessarily feel the power of the crystal washing over me, I thought the water tasted great and the thick glass bottle kept it nice and cold. It also felt pretty durable, like it might withstand a couple of drops as long as they weren't on too hard of a surface.

While the bottle looks pretty sizeable, the tall base and the crystal inside take up a lot of its volume. It holds about 18 oz. of water in total, which is a decent amount, though I kept tricking myself into thinking I was drinking more water than I really was.

Of course, the most important element of drinking an elixir was determining whether it really worked. It's hard to say for sure, but I do believe that it has made be more communicative, forgiving and open over the last week of using it. I've had a couple of pretty important talks with people close to me in the last few days that seem indicative of a big spiritual change. I'm pretty impressed.

I was surprised by the actual changes I've seen in my life regarding openness and communication since using the Glacce bottle. However, while they could be the effects of the crystal, it could also be that seeing that pretty pink hunk of rock in a bottle every time I drink water reminds me that I should always have those things in mind. Either way, it's a welcome improvement in my life.

While you may not see the same effects I did with the bottle, it's still a great glass bottle that'll catch a lot of attention. However, the price point of up to $100 may seem extra steep to some. If you don't believe in the healing power of crystals, you'll probably want to sit this one out. However, if you use crystals in other aspects of your life, you'll want to give Glacce a shot.

While all of Glacce's bottles are out of stock on their website, they're available in other online retailers. Just give them a search and they should pop right up.

If you're new to the idea of elixirs, click HERE for a crash course on the benefits of crystals.