Is the Glitter Strobing Trend Easy to Apply? Find Out!

Glitter strobing is the newest craze to hit the beauty scene, and I knew immediately I had to give this one a go.

I've said this before: I'm not a huge glitter fan. However, I'm all about highlighting and have never said no to a good shimmer, so I knew I could get behind this trend. The buzzword "strobing" picked up steam last year and in essence, it's a cute, disco-sounding word for highlighting.

The trick to highlighting is to hit all the high points of your face–cheekbones, brow bone, and cupid's bow. So with glitter strobing, it's all about hitting the high points of you face with some glitz. And, what's cool about this look is you can go as mild or bold as you want. Celebs like Gigi Hadid and Khloe Kardashian have gone for the more wearable version, using ultra shimmery, gold highlighter. Then, there's the high-watt Insta look like this one that takes glittery goodness to a whole new level.

I wanted to try out a look somewhere in the middle. Something cool and attention-grabbing, but also wearable. Read on to see how my glitter strobing trend trial went!

Start with a fresh, clean base. I went with NARS foundation and Tarte concealer. Beginning with a cream base also gives something for the shimmer and glitter to stick to! 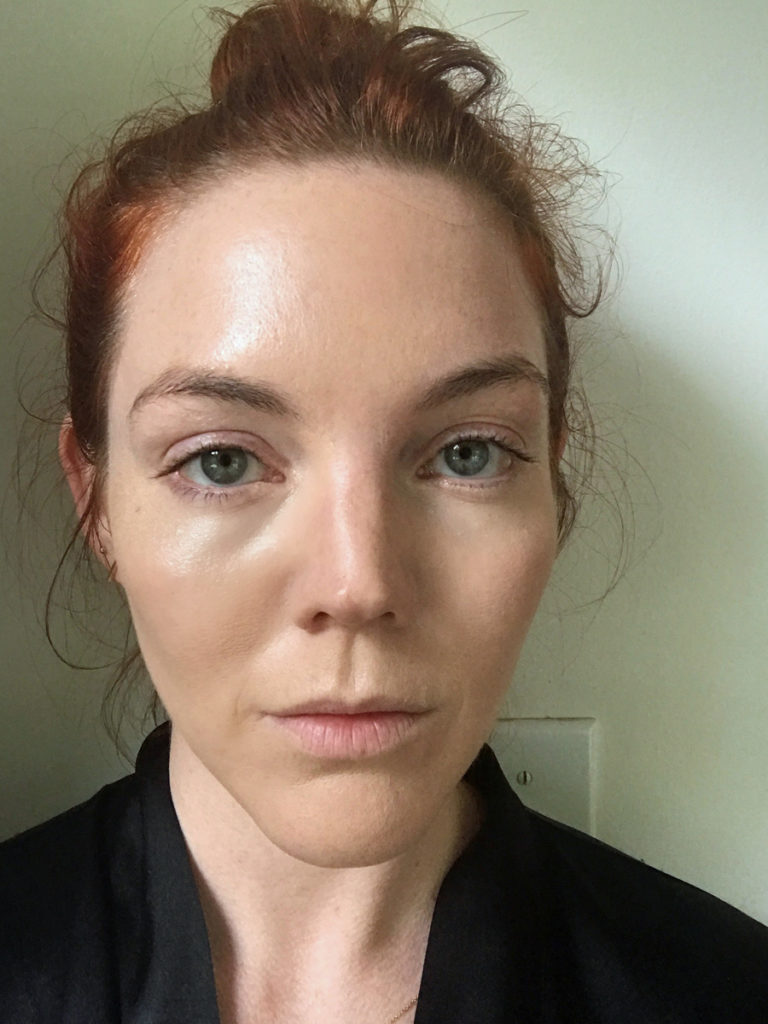 I knew I wanted something soft and pretty, so my first instinct was to go with a high shine pink eyeshadow with super fine glitter. I settled on a pink glitter metallic shadow by Colourpop in Mama's Apple Pie. I applied the shadow with a brush along my cheekbone and around my eyes, creating almost a curved "L" shape. After putting on the pink, I wasn't sold this was the right color. 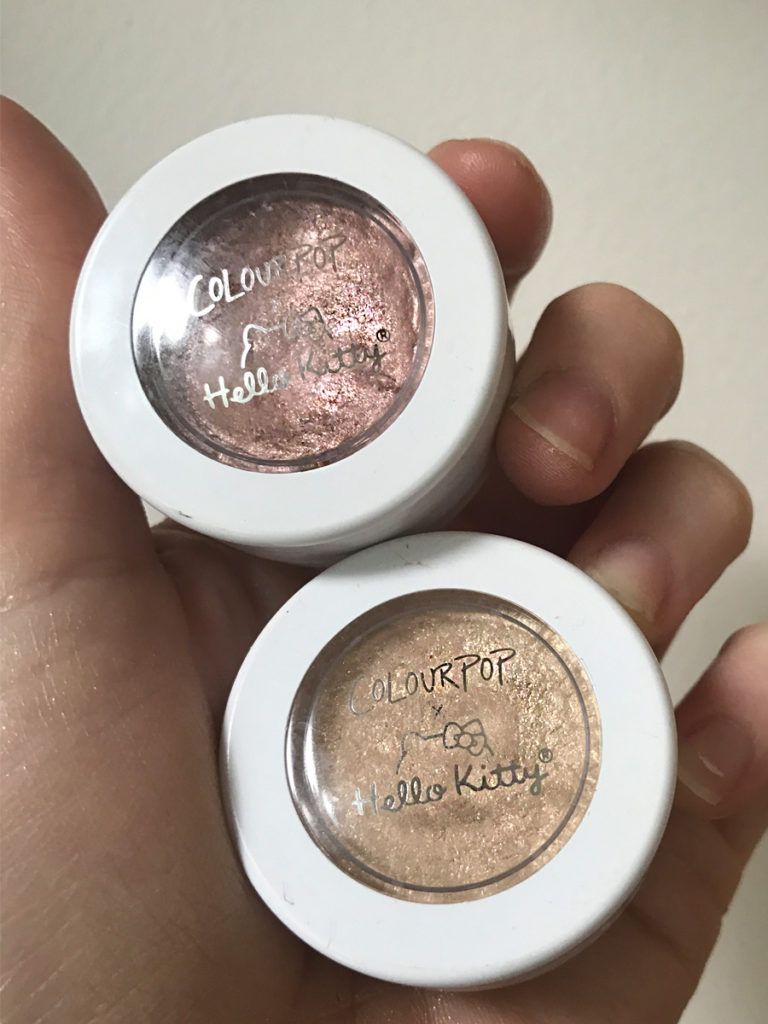 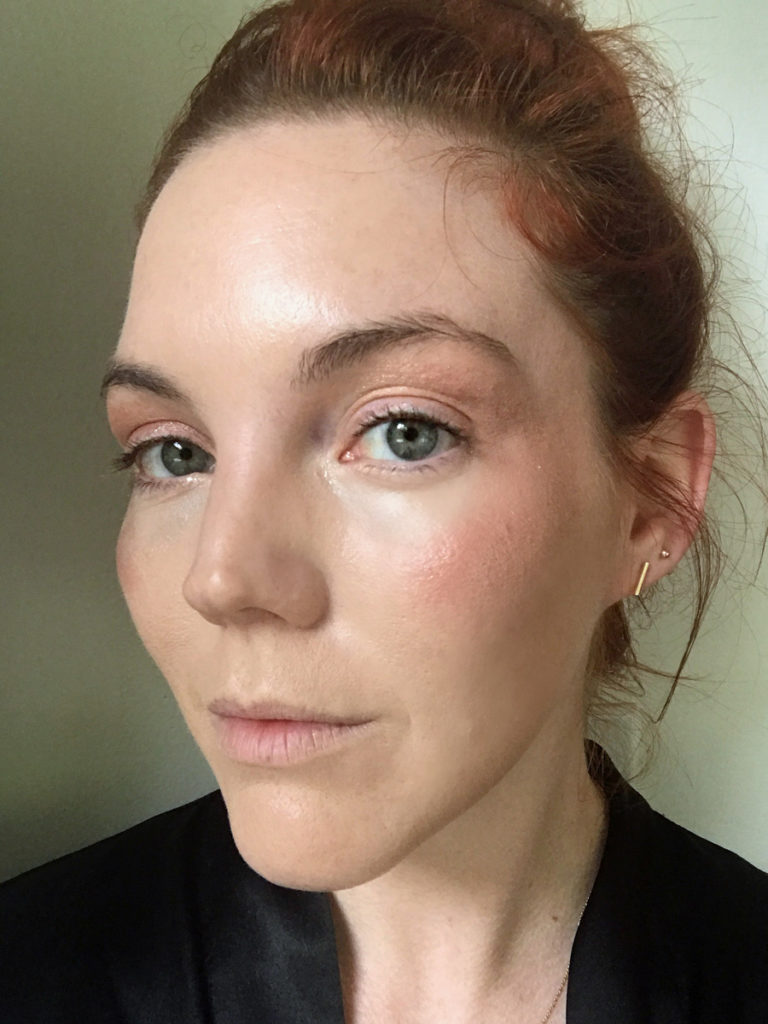 To really get a high impact, glittery look, I added on a gold glitter eyeshadow by Colorpop in Juicy Apple to the inside rim of the pink shadow. This really punched up the look and I was starting to like it. I also put gold glitter on the inside corners of my eyes, down my nose, and on my cupid's bow. However, I knew something was off about the pink… I felt that the pink made it look like I either had way too much blush on or a bad sunburn. 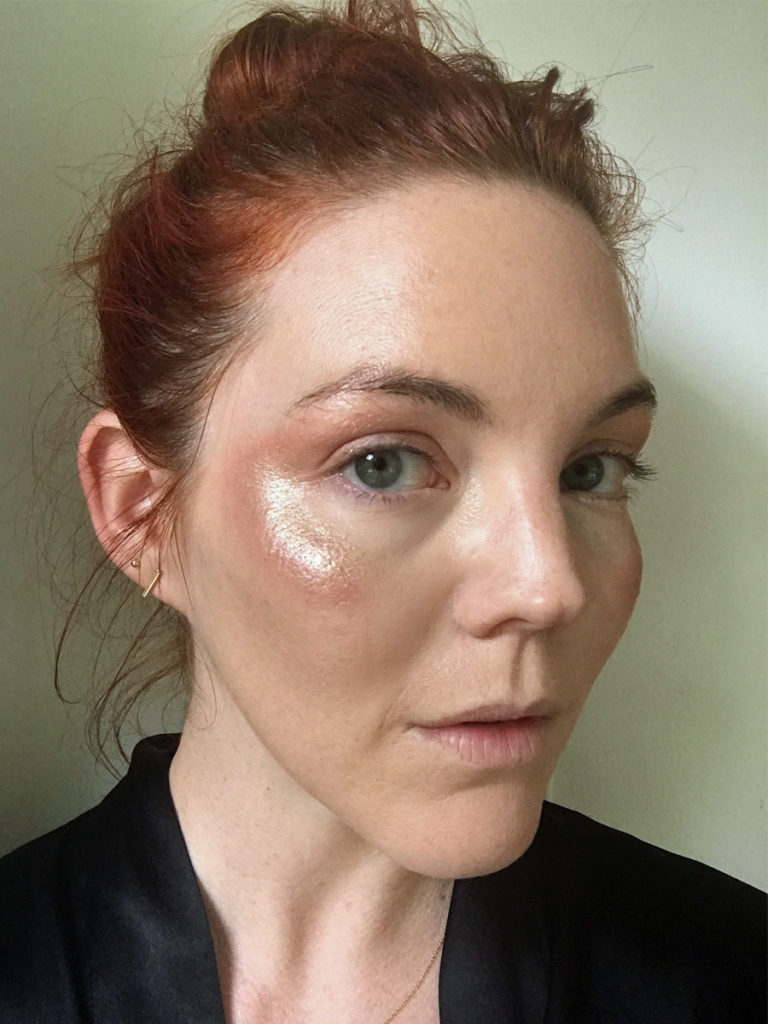 Yeah… not so cute. So, I decided to go back over the pink with an iridescent purple shadow from Kevyn Aucoin's Neo-Limelight kit. This product is magic BTW and perfect if you ever want to channel your inner unicorn. It's hard to see here, but there is actually a ton of super fine glitter in both of the products I used. 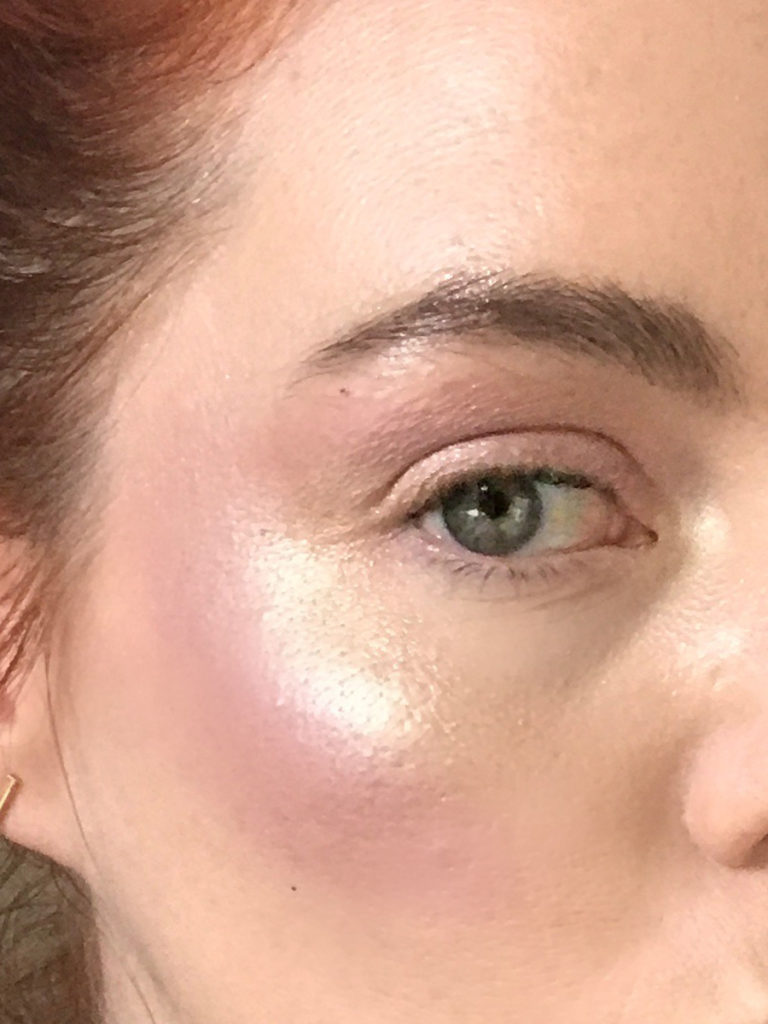 Much better with the purple, don't you think? Once I was happy with my look, the only other thing I did was fill in my brows with some brow gel! 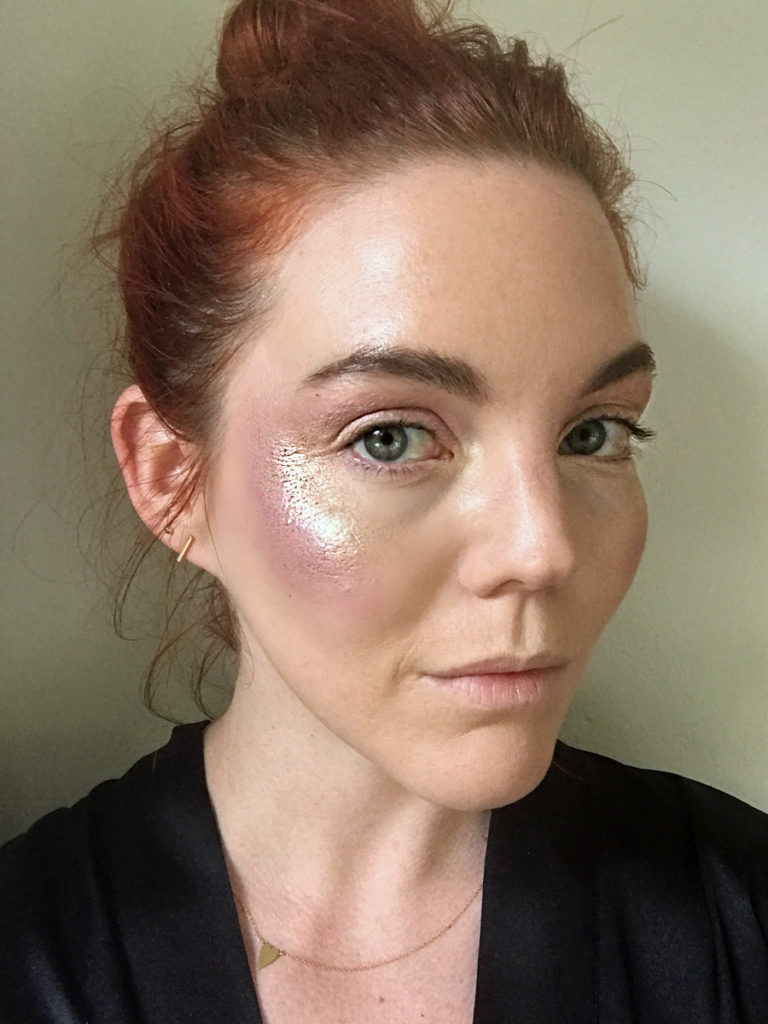 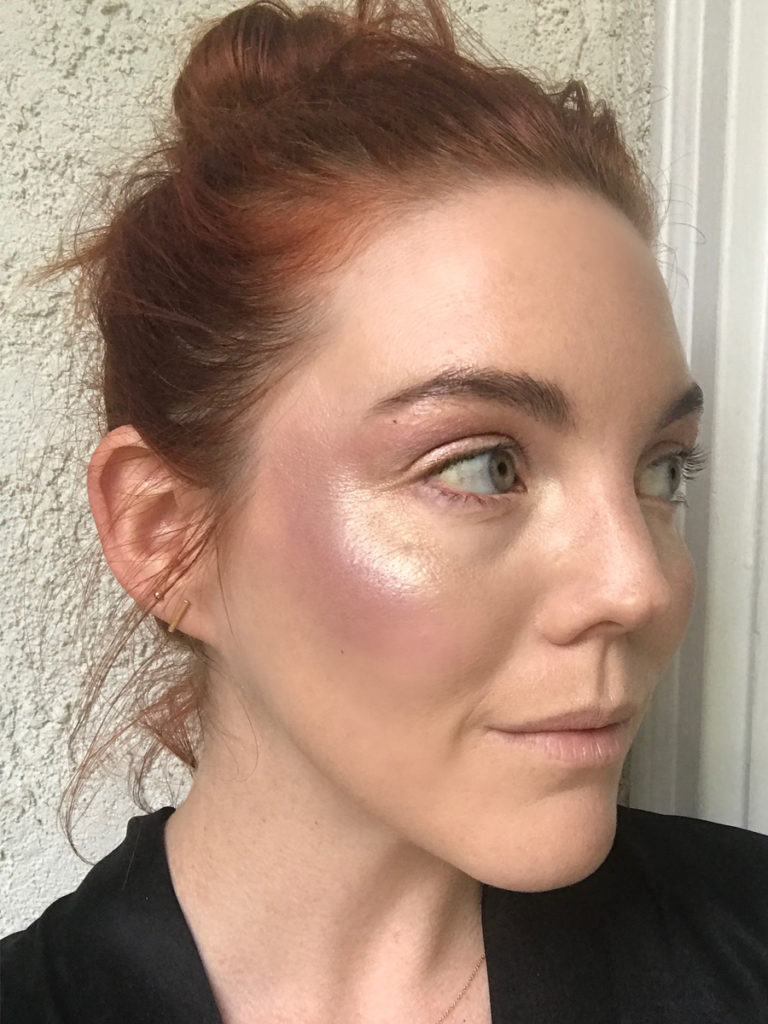 Overall, I think this look is super fun! It was incredibly easy to do and I think the end result is perfect for a music festival. I would totally rock something like this to Coachella.

I'm so glad that I used super fine glitter, too. The only downside is that the fine glitter didn't really show up in photos, so if you're doin' it for the 'gram, maybe use larger glitter. But IRL, it looked like I had loads of little glittery crystals all over my face.

Want more fun beauty? Click HERE to find out what happened when we tried 100% smear-proof lipstick.