Each Harry Potter movie is a unique viewing experience, which means the snack pairings should be just as specific.

With so many different themes running through each film, you'll have all kinds of cravings that can't be satisfied with a simple batch of buttered popcorn.

Get inspiration for your next HP movie marathon with the carefully selected themed snacks below:

Being the first film of the series, our favorite trio is at their youngest so it's only appropriate that we reconnect with our 11 year old selves by gobbling up treats from the trolley. For this movie, we're recommending that you melt down some chocolate bars for dipping your favorite gummies and fruits. Recreate the infamous hopping chocolate frog and other magical trolley treats with melted milk chocolate. But we can't stop there—the most iconic prop of the first film is Nicolas Flemel's red stone that brings about immortality. Rediscover this magical stone through sugary crystallized rock candy. 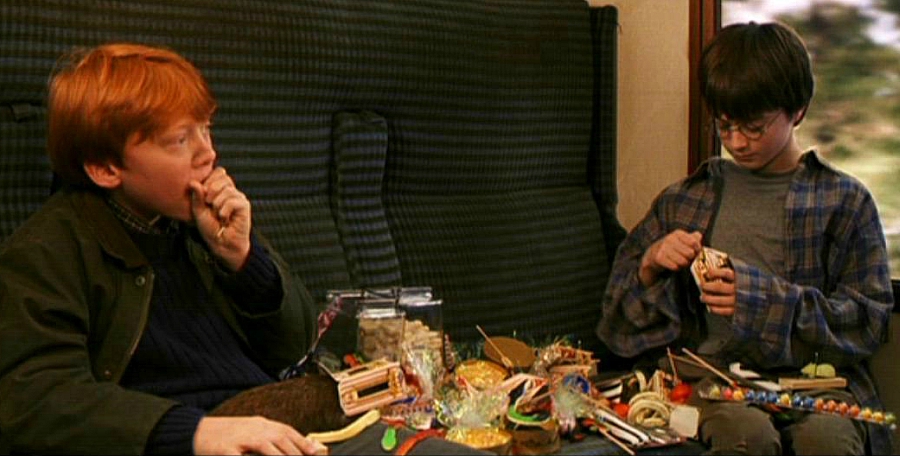 (Harry Potter and the Sorcerer's Stone via Warner Brothers)

Harry Potter fans know the secret lurking within the castle chambers, and that's the slithering giant Basilisk. For this movie, pick a favorite soft pretzel recipe, but instead of the classic knot, shape your dough into a snake-like body. You can even skewer the soft dough so it keeps its slinking shape. A couple dabs of mustard will make perfect eyes while rock salt can form the look of sharp pointy teeth.

(Harry Potter and the Chamber of Secrets via Warner Brothers)

The Prisoner of Azkaban is the first time our third-year peers get to adventure into Hogsmeade. Create a spread of sweets to enjoy as though you've just popped out of Honeydukes, as well as salty counterparts including assorted nuts, crisps and pretzels to recreate the pub theme of the Three Broomsticks. Of course, what would a trip to Hogsmeade be without a tall glass of Butterbeer? The salty-sweet combo also reflects the movie's contrasting reputation of Sirius Black before and after we know his true backstory. 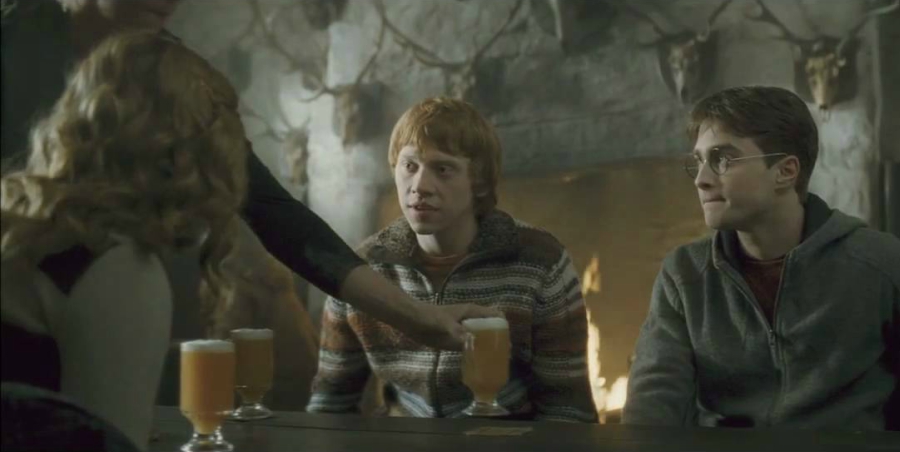 (Harry Potter and the Prisoner of Azkaban via Warner Brothers)

The Goblet of Fire is a three-course snack to pair with each event of the Triwizard Tournament. Create egg-shaped popcorn (or if you prefer, Rice Krispie) balls to symbolize the dragon's egg that each contestant must retrieve. Go a step further and add yellow food coloring to these treats to give them a gold finish or consider adding yellow M&Ms or Reese's Pieces. For the next task, we're diving into the Black Lake, but not before taking our gillyweed! In solidarity with Harry, who has the unfortunate task of actually chocking down some gillyweed, we're snacking on Gushers, Fruit by the Foot, or Fruit Roll Ups, which resemble the slimy plant. Lastly, break out a pack of Sour Straws or Redvines because we're going deep into the maze. The most heroic part of this task was when Harry saved Cedric from the vines, which is why we're paying tribute with some sweet and sour straws of our own. 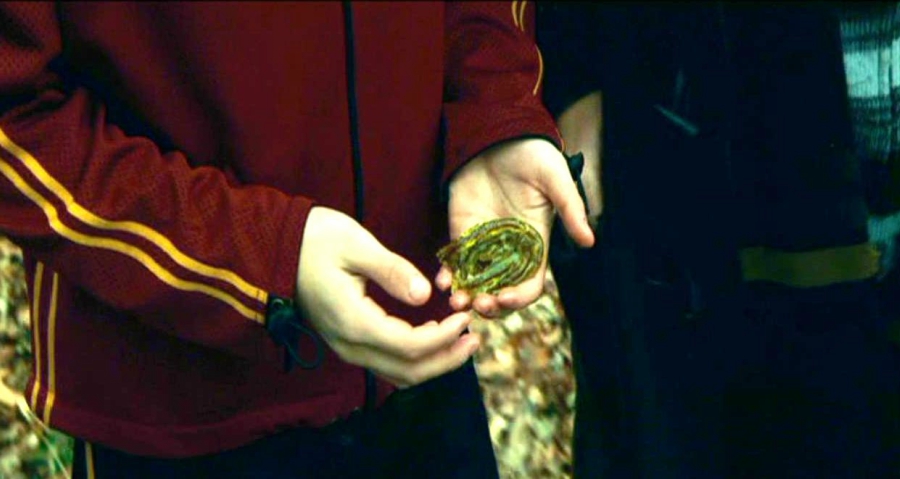 (Harry Potter and the Goblet of Fire via Warner Brothers)

Order of the Phoenix

The highlight of the Order of the Phoenix was definitely learning how to conjure our Patronus Charm. Before your viewing party, grab an assortment of animal cookie cutters for creating Patronus sugar cookies. If you're running short on time, you could swap out the homemade cookies for some boxes of animal crackers which will also pair nicely with your piping hot tea. While exactly none of us want to be Professor Umbridge, we certainly couldn't watch this movie without having a little tea time of our own. Whether you prefer green tea, chai or English Breakfast with an unhealthy dose of sugar, you'll want to sip this beverage before Umbridge calls you into her office for insubordination. 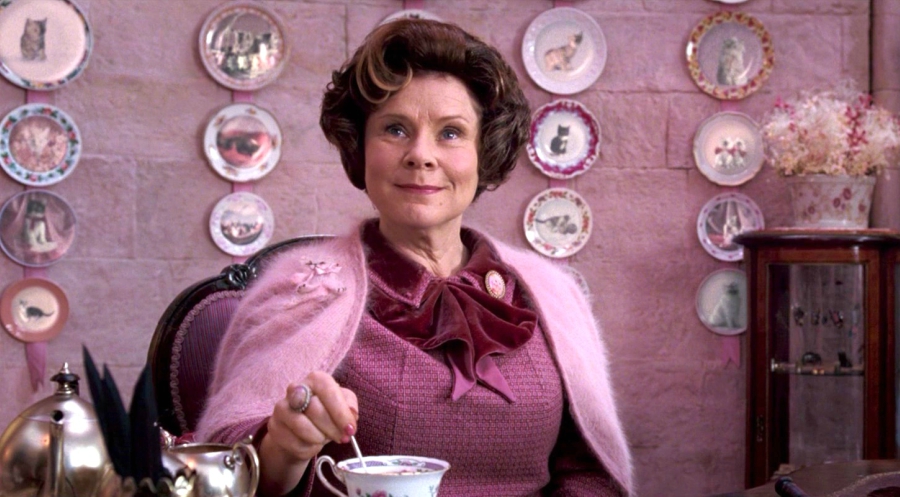 (Harry Potter and the Order of the Phoenix via Warner Brothers)

The Half Blood Prince, aka Snape's alter-ego, is a movie full of potions. From Ron's run-in with a love concoction, to Harry's skillfully (or deceitfully) brewed Felix Felicis, brew your own delicious potions with orange soda and vanilla ice cream to produce a golden glass of liquid luck. 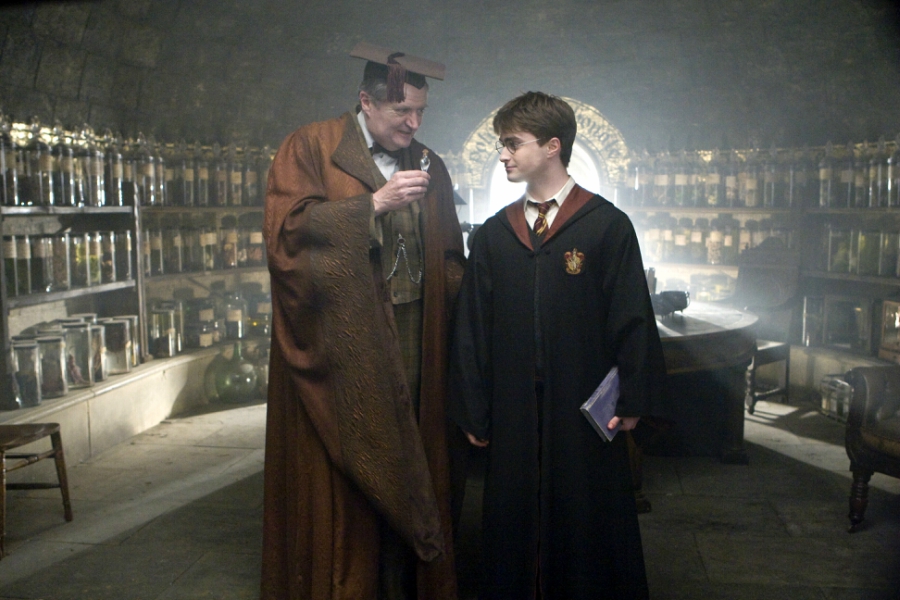 (Harry Potter and the Half Blood Prince via Warner Brothers)

Things in the wizarding world are really starting to get serious, so we've decided that your snack should be on the lighter side for this film. These sweet and salty snacks symbolize the three Deathly Hallows themselves, as told by the legend of the Peverell brothers. For the resurrection stone, enjoy a big bag of malted milk balls. Fashion your own elder wand from pretzel rods and decorate with melted chocolate and other sweet treats you can mold onto the sides. We had to think out-of-the-box for the invisibility cloak, and decided cotton candy would do the trick. The way it dissolves so quickly in your mouth brings vibes of the mysterious disappearing act of the cloak.

(Harry Potter and the Deathly Hallows Pt. 1 via Warner Brothers)

The second part of the Deathly Hallows is all about the Battle of Hogwarts. Throughout the film, buildings are blowing up and sparks are flying from the battle between good and evil. Feel a part of the action with Pop Rocks popcorn using this recipe. To take your theme up a notch, try creating two batches: one using green Pop Rocks and one using red. 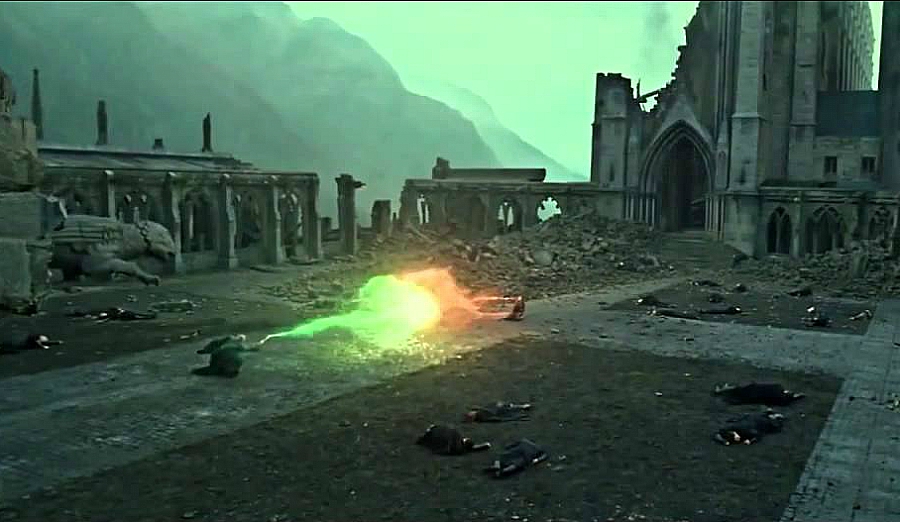 (Harry Potter and the Deathly Hallows Pt. 2 via Warner Brothers)

These treats are perfect for the adventurous snacker who relishes in a good theme, but if you're more old fashioned about your movie munchies, check out some unusual, yet delicious popcorn recipes HERE.