We Play 20 Questions With Jacob Hopkins!

Jacob Hopkins is the voice of one of our favorite animated characters, Gumball, on The Amazing World of Gumball. We hung out with Jacob for an exclusive interview to ask him ask him how he's just like his character Gumball, what it was like to receive a black belt in Taekwondo and the one thing he never leaves the house without, which you'll definitely never guess! 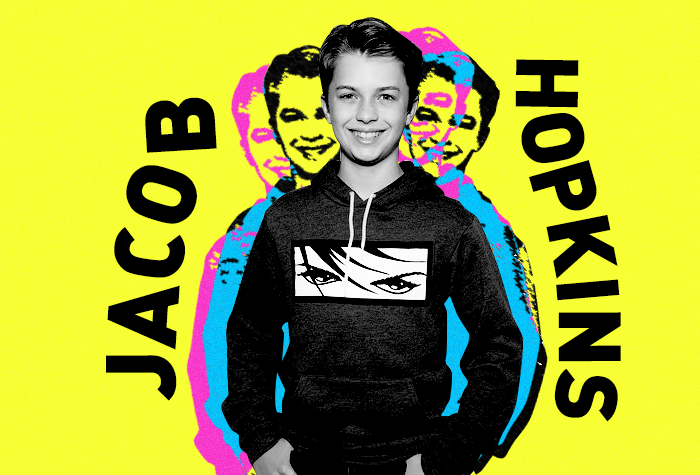 1. Can you tell us a little bit about your character of Gumball Watterson on The Amazing World of Gumball?

Imagine a cat with a big blue head who loves epic misadventures, planning things out, enjoys video games, hanging with his best bro, Darwin, and let's just say a flare for living life to the fullest…that's Gumball!

2. What do you love most about getting to voice Gumball?

3. How are you similar and different to Gumball?

We're both boys, smart, witty, we talk a mile a minute, and love adventures! On the other hand, I don't get into the kind of trouble Gumball gets into.

4. Why should our readers check out The Amazing World of Gumball?

It has a mixture of different kinds of animation! It's also super duper creative, hilarious, and the writing is amazing…no pun intended!

5. You've worked with tons of different actors, but is there someone you'd love to work with that you haven't worked with yet?

6. You've also been on plenty of shows, is there any show you would love to have the opportunity to guest star on?

7. Who would you love to have guest star on The Amazing World of Gumball and what character would you hope they would play?

Merit Leighton. She would play a unicorn named Yumi with a rainbow mane and sparkles.

8. What has been your favorite character you've played so far and why?

9. You have a black belt in Taekwondo. How did you feel when you received your belt?

I felt honored and I'm really looking forward to testing for my second degree black belt in October.

11. If you were to be instantly turned into an animal right now, which one would you hope it would be and why?

A dog because they are extremely loyal.

12. What's your favorite thing about yourself?

My favorite thing about myself is my joy and enthusiasm.

13. Which emoji best describes you?

The laughing one that has tears of joy.?

14. If you could teleport anywhere in the world right now, where would you go and why?

Michigan in the wintertime because of the awesome snow!

15. Who is your favorite Disney character and why?

Dipper Pines because he's a really smart guy and he's a detective.

16. If you could only wear one color for the rest of your life, which would it be?

My mom says sometimes I grit my teeth in my sleep.

18. What's something that never fails to make you smile?

19. What's the one thing you never leave your house without?

20. Is there anything you would like your fans to know about you that they may not already know?

I play drums and have a band called "The Pedestrians" with my brother, Gerad and Terrell Ransom Jr., who plays the voice of Darwin on The Amazing World of Gumball.

Is The Amazing World of Gumball one of your favorite shows? You absolutely need to check out our interview with Jacob's co-star Terrell Ransom, Jr.