Jeremy Thurber may not be a household name, but he's a renowned songwriter who has penned hits for artists including Jake Miller, Big Time Rush and Greyson Chance. He's also besties with "All About That Bass" artist Meghan Trainor, and often collaborates with her. This summer, he released his second EP, #SOLO! 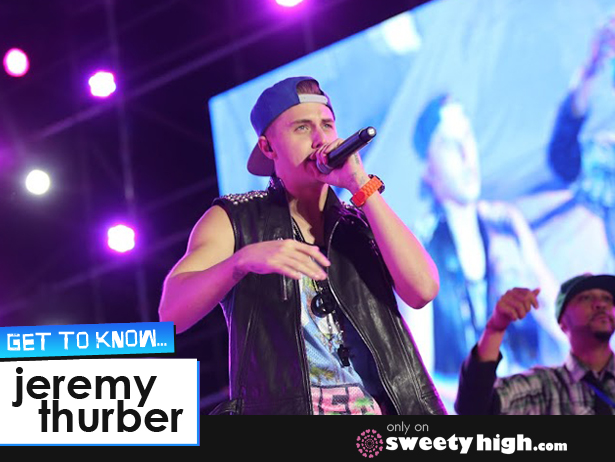 In a recent interview, we spoke with Jeremy about how his beginnings in music, working with other artists and the new EP!

"I always knew music was going to be a part of something I wanted to do," Jeremy said.

Jeremy started dancing at 5, and started jotting down songs in his school notebook when he was 8. But it wasn't until he turned 15 or 16 that he realized that he wanted to make a living out of creating music.

Jeremy's background as a dancer allowed him to anticipate the needs he would have to meet as a musician.

"I think it prepared me tremendously with an insane work ethic to constantly push myself and grow and to also learn and accept there's always someone working harder than you somewhere so you get what you put in," he said.

"I was def in awe of what can happen if you work hard," Jeremy said.

Drew wrote Jeremy's first single, "I Love You But…", which was a quick success.

"When 'I Love You But…' was leaked and took off like a flame to gas it was insane and exciting, but I wasn't ready for it either," Jeremy said.

"I had actually worked at Universal/Rondor months before," he explained. "While playing Halo on a Sunday evening, I got a random call from Ashley Calhoun at Rondor and she was like, 'Hey, wanna work with The Fliptones and their new artist?!' I threw my video games down and was there in like 30 minutes!"

Jeremy was working with Jason Derulo and The Fliptones when he wrote a song called "Collide."

"They sent it to Jake, and he came to town and we finished it together," Jeremy said. "I honestly wasn't the biggest fan of it at first, but now I love it! Funny how things work out, you just never know!"

Of course, Jeremy has also been performing on his own, debuting his own songs and attracting a growing audience. When he opened for Jennifer Hudson, he decided to appeal to the audience with something familiar, creating a mashup of Demi Lovato's "Neon Lights" and his track for Jake Miller, "Collide."

"This time the music was actually a representation of me," he said. "I wanted to be honest, and that is what I'm working towards with this next set of songs as well."

So what can we expect from Jeremy next?

"A LOT more music and the next evolution of who I am!" he replied. "I'm trying to get quite clever as my music matures with me. And shows. I love performing."

He also wanted to remind fans of the big role they play in his life.

"I just always wanna make sure my fans and friends know how much it means to me that they support me along this crazy journey," he said.

If you don't yet, be sure to follow Jeremy on his social pages, listed below. L.A. fans should look out for Jeremy Thurber at the Social Slam Selfie Awards on October 4!

Loved this story? You may also like our interviews with Jake Miller at Universal CityWalk and on the set of his "First Flight Home" music video!