Katie Garfield On Songwriting and Acting!

Katie Garfield is a 20-year-old singer, songwriter and actress from North Carolina who stars in the upcoming Michael Bay-produced thriller, Welcome To Yesterday. 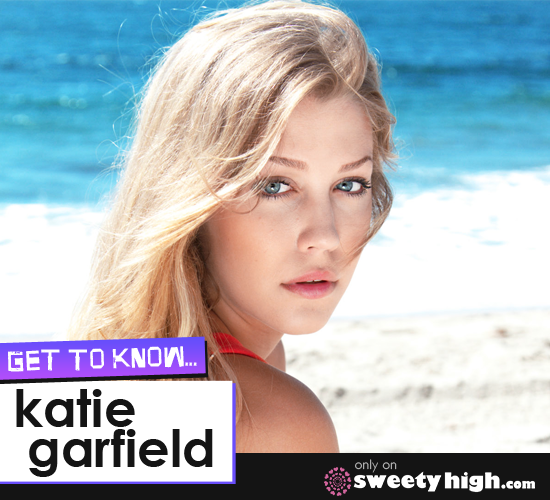 We recently spoke with Katie about her musical past, the things that inspire her songwriting and about getting ready to appear on the big screen!

Katie Garfield was singing around the house from the time she was a toddler, but never really knew she was a good singer until the end of elementary school.

"In 6th grade, my friend asked me to audition for the choir with her because she was too afraid to audition by herself," she said. "Both of us went in together and auditioned and we actually both ended up getting solos. I had no idea I could sing!"

From there, she met fellow musicians who encouraged her to take part in musical theater, where she was first inspired to learn to play the guitar.

"I noticed people would bring in their guitars to rehearsals and were just jamming when we were waiting for our turns to go rehearse our scenes," she said. "I was really excited by the instrument and wanted to learn how to play it."

The experience inspired Katie to take guitar lessons starting at the age of 14. Her involvement with musical theater also exposed her to her life's biggest passions, acting and music.

Musically, Katie isn't just a singer, but also an avid songwriter. She writes her own lyrics, melodies and instrumentals, but she also loves to cowrite, especially with songwriters in other genres.

She tries to cowrite at least a couple of times per week.

"There's nothing better than having a good cowrite session with another great songwriter," she said.

Katie often begins that writing process on her own.

"I always keep a lyric book with me, and I like to write poetry first," she said. "Whatever is happening to me at that time, or happening to somebody I care about, or something someone says that inspires me. I'll write the lyrics and write my thoughts down in my idea journal."

From there, she will bring her ideas to a cowriting session or finish the track on her own sitting at the piano or with her guitar.

Katie admitted that, as a 20-year-old girl, most of her songs are inspired by her personal life.

"Who doesn't love a good love song?" she said. "I have great boyfriend right now, so I like to write about our relationship and the things we go through, and the heartbreak of my past, and past relationships."

One of Katie's songs, "This Time" is about letting go and falling in love. It was inspired by Katie's own experience of falling in love when she first moved to California a year and a half ago.

"I had always shot myself in the foot when it came to relationships," she explained. "I'm a constant overthinker, and I'm a total overanalyzer, so I think 'This Time' was about making the decision to myself to not overthink about the relationship."

However, now that Katie is in her 6th year of songwriting, she's trying to challenge herself and break out of writing mostly about relationships.

"I'm writing about family things and problems in the world that affect me and people that I care about," she said. "I want to write about the things my generation is having to respond to."

Katie also got the opportunity of a lifetime last October at We Day Minnesota, where she got to perform on the same stage as huge stars including Carly Rae Jepsen, Fifth Harmony and the Jonas Brothers.

"We Day was hands down 100 billion percent the best day of my life," Katie said. "There were 18 thousand kids there who, through community service, earned their way to this concert, just by being good kids and by putting others' needs above their own. To be able to perform for such an amazing, inspiring group of kids was unbelievable."

Katie not only got to work with and speak for the amazing charity Free the Children, but it was also Katie's first performance in front of such a large group. She told us the experience was better than she could have ever envisioned.

"There was so much love radiating back from the audience," she said. "I've never known a happiness like that. I was elated."

Even now, Katie said she can remember exactly what she felt when she was up on the We Day stage.

"It was the best combination of emotions," she said. "My family was there. They flew up from North Carolina to be with me and I could see them standing right on the side of the audience to my left. It was amazing and I'd love to do it again."

Katie is also an actress, and stars in the upcoming film Welcome To Yesterday, which releases on February 28.

The film, formerly known as Almanac, was produced by Michael Bay and directed by Dean Israelite and filmed in Atlanta, Georgia last year.

"It's essentially a movie about a group of teenagers who find the blueprints to a time machine, and they build it and go back and time," Katie said. "Some very interesting things unravel along the way."

In Welcome To Yesterday, Katie plays Liv, a friend of one of the main characters. It is partially a "found footage" film, in which the characters carry around a video camera and record their experiences traveling around in the past.

"It was an amazing experience on a huge set," she said. "It's got a really cool action packed, intense side to it which is going to be really nice to see. I'm excited for that."

Currently, Katie is splitting her time between her acting and musical careers. We asked if she holds either passion closer to her heart.

"In the perfect world I would have both, and I've been fortunate enough so far to be able to be successful and remain artistic in both," she said. "But songwriting is the most important thing in my life. It's one of those things that I'll be doing, if I'm lucky enough, when I'm 85 years old and 95 years old."

But just because she wants to be a songwriter for the rest of her life doesn't mean she isn't in love with acting too.

"The things and experiences I've been able to have and the people I've been able to meet through my acting and being onset have been incredible," she said. "There's really nothing like it. I can't choose one. They both make me so happy."

To keep up with Katie Garfield's work, be sure to check out her official website here, and join us at Sweety High to tell us about your passions!