Everything We Learned From the Kirby and the Forgotten Land Demo

From the moment we first laid eyes on the first trailer for Kirby and the Forgotten Land on the Nintendo Switch, it was clear it would be a Kirby adventure quite unlike any we've seen before.

We're particularly excited about the 3D stages and lush environments of the upcoming game, out March 25, so when the folks at Nintendo offered to let us check out an early preview of the game, we jumped at the opportunity. And if you feel like you've missed out, don't, because the demo we saw is now available for anyone to play in the Switch eShop. Keep reading for everything we learned from the preview—and to find out what you can discover yourself from the demo.

Kirby Is Back and Cuter Than Ever

We didn't think it was possible to improve on the cuteness of everyone's favorite pink puffball, but Kirby is so cute in this game—especially when he expands to do his famous inhale move. This game starts with Kirby having a regular day on his home world, Planet Popstar, when he's suddenly sucked through a portal and transported into a mysterious world—the titular Forgotten Land. Soon, he lands on a beach, encountering some familiar enemies, and his story unfolds from there.

And, if you're not yet familiar with Kirby's lore and history, the game has you covered there, too. Hidden through the stages are gachapon-style capsules that reward players with in-game collectible figurines. Each one comes with a detailed description that will help introduce you to the world of Kirby. It also helps that there will be a lot of them—and that they're ultra-cute. 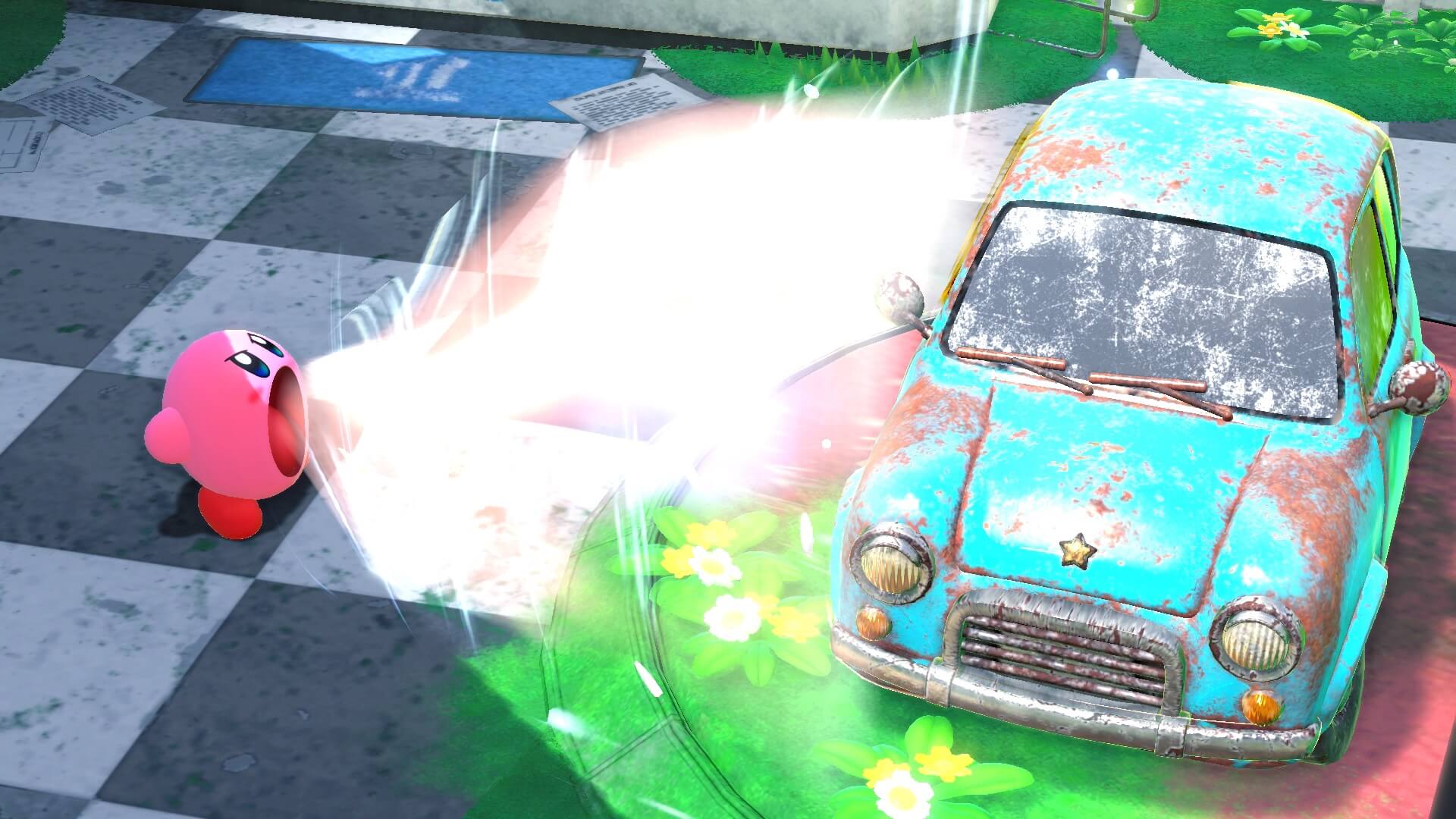 Though the demo only gives us three small stages to experience, if they're an indicator of what's to come, this will be a gorgeous and delightful game to play. On top of that, there are two difficulties to choose from. Wild Mode is more challenging, and there are more rewards to be unlocked, while Spring-Breeze Mode gives players more health to help them get through the game's stages.

Once you jump in, it's plain to see how this is a much more open-world experience compared to previous Kirby entries. At the first areas, the Point of Arrival and Downtown Grassland, Kirby travels through a lush forest and rocky cliffs before spying the city, overgrown with lush plant life. The abandoned city includes parking lots and towering skyscrapers.

You'll also discover this land has been taken over by antagonists called the Beast Pack. They've kidnapped the local Waddle Dees, and it's up to you to rescue them. In fact, for each level, your list of missions comes with a cage symbol next to each one representing how many Waddle Dees there are to save. Most of the missions are also secret, for the player to discover, so the completionists out there will want to explore every nook and cranny of the world to find them all and bring as many Waddle Dees to safety as they can.

The game also includes an adorable flying squirrel-like character called Elfilin, who'll also join your quest to save the Waddle Dees. In each area, once you reach the golden cage, you'll know you're at the end of a stage—before seeing an adorable victory dance performed by Kirby, Bandana Waddle Dee and Elfilin.

The third area available in the demo is The Brawl at the Mall, a powerful boss. In the final game, boss stages like his must be completed before unlocking new areas. They can be tough, but with a world this ridiculously charming, you'll definitely be motivated to seek out all of its secrets and keep going. 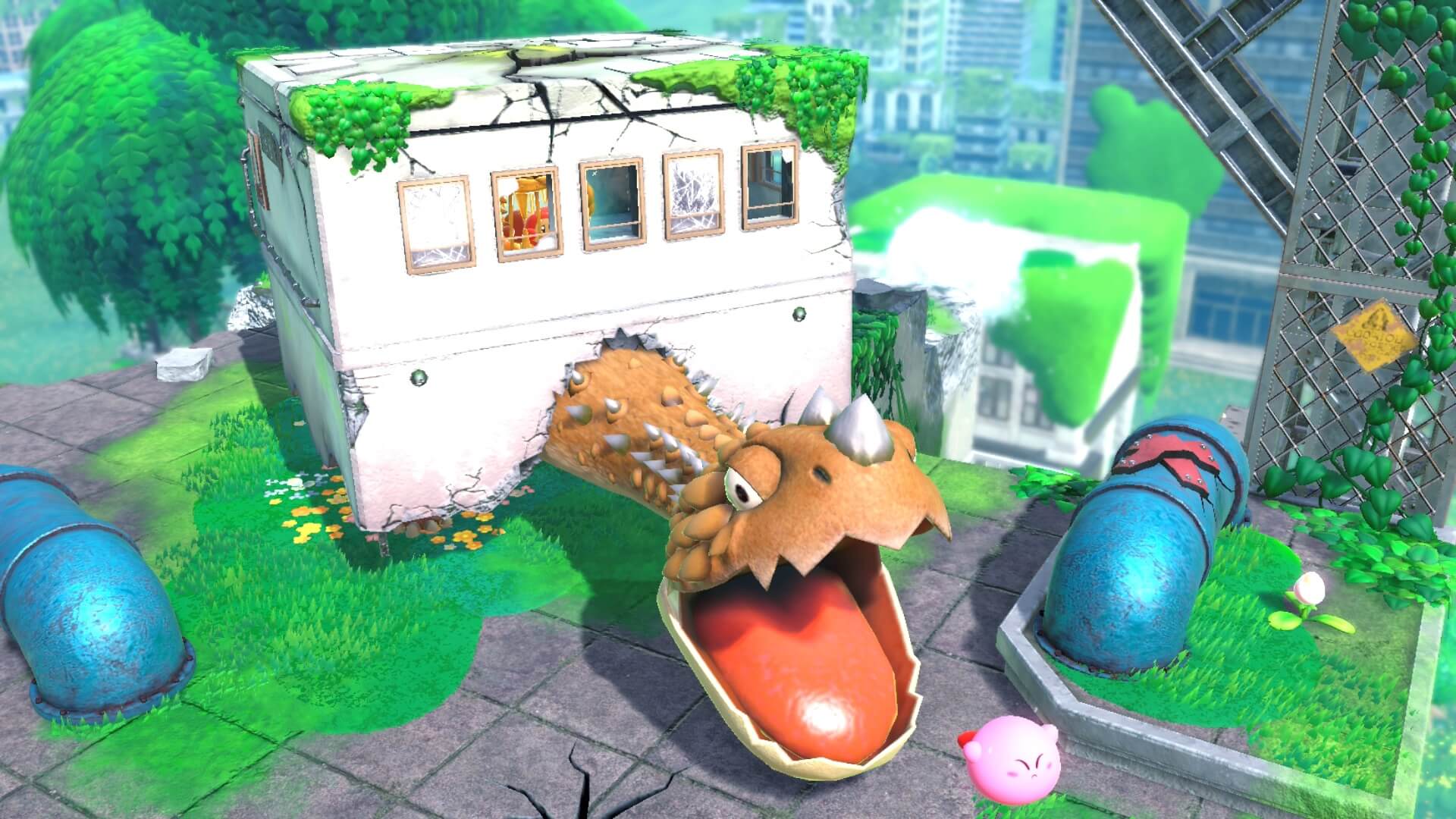 The Bosses Will Give You a Run for Your Money

Speaking of bosses, we saw two in the demo, and both are pretty impressive. However, the game does want to give you a fair fight, so it allows you to choose between a couple of Copy Abilities, Kirby's famous ability to utilize enemy powers and use them against other baddies and obstacles.

The first is a mini-boss called Wild Edge, who'll swipe at you with a big slicing sword, and protect himself with a strong shield. His fight has two phases, but when you defeat him, he drops a Copy Ability of his own for Kirby to use.

The Brawl at the Mall boss fight with Gorimondo is especially interesting. He's a huge, gorilla-like boss with sharp baboon teeth and a mohawk, with some formidable stomping and spinning moves. For this fight, we saw Kirby utilize the Ice Copy Ability, which allowed him to freeze and stun Gorimondo, as well as to skate around him like he was on ice skates. We definitely suggest experimenting with different copy abilities, both in interactions with the environment and enemy battles, to see how the world reacts to them all, and to find your favorites for every occasion.

You Can Play With a Friend

Once you beat the tutorial once, you unlock the game's co-op mode, with allows you to play with a friend on the same system. You can each play with just one Joy-Con each, or use additional controllers if you have them to have Player 1 take on the role of Kirby and for Player 2 to play as Bandana Waddle Dee.

The characters are also handled differently. Kirby is as agile as ever with wide slides, dashes and vaults, in addition to his classic hovering move. He can also inhale items and enemies and spit projectiles, as well as swallow some enemies to acquire Copy Abilities. While Bandana Waddle Dee can't inhale anything, he can float in the air by using his spear as a helicopter blade, and throw piercing spear after spear for super sharp attacks.

This co-op mode is great for sharing with a less experienced player, or just a chill, casual playthrough with a friend. Even cuter, any food items that restore health can be shared with your buddy through a friendly high-five.

Mouthful Mode Is the Best

One new feature of Kirby and the Forgotten Land is its Mouthful Mode, and there's a reason why the images of it have gone totally viral. Car Mouth Kirby basically has an entire car in his mouth and can jump and turbo dash with his little feet flopping behind him. In co-op, Bandana Waddle Dee rides on his back, and he can still throw spears to defeat enemies and clear areas. You also continue wearing any Copy Ability outfits, like the little green hat you wear when you have the Sword Ability, in Car Mouth mode. 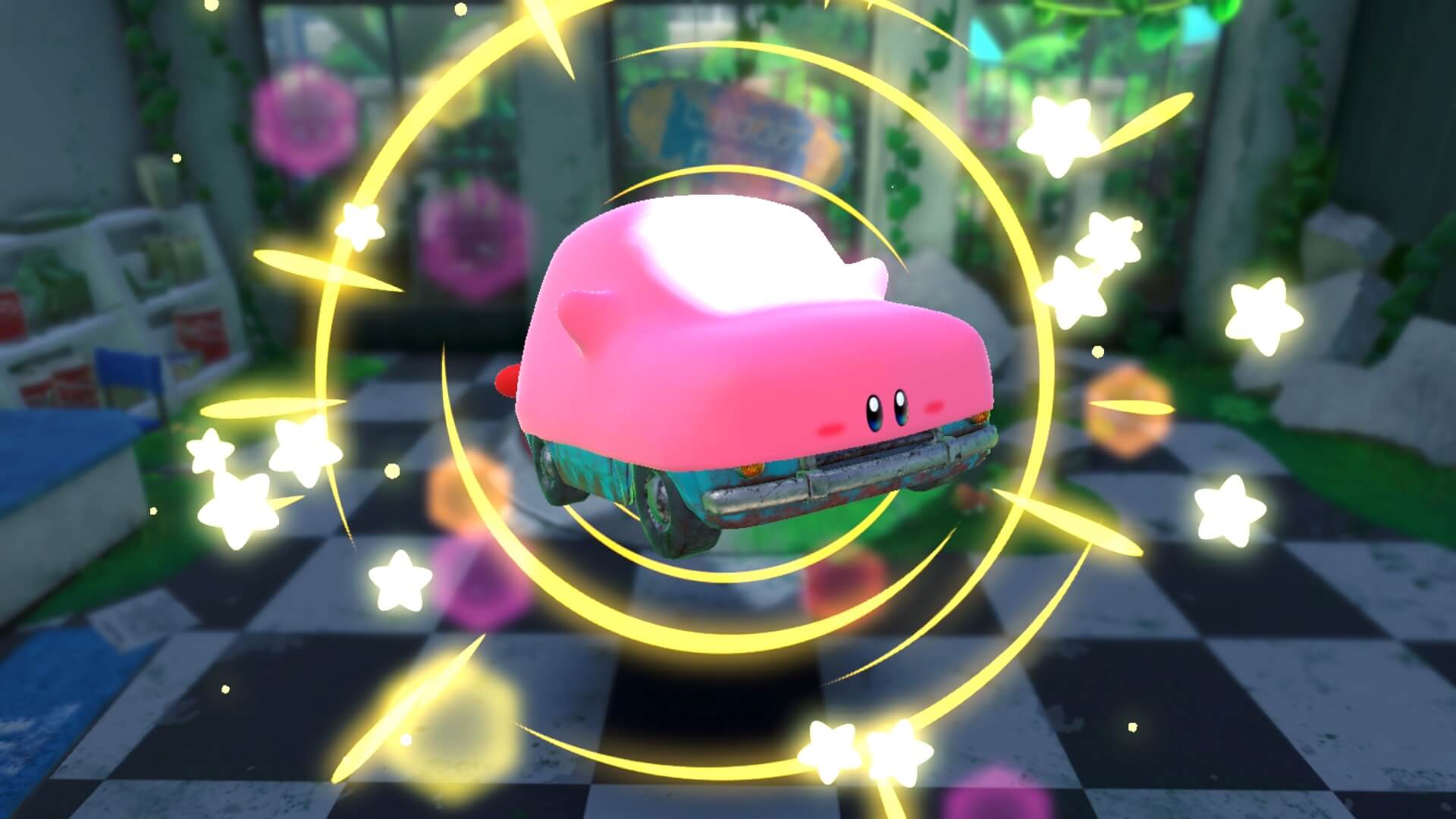 In Vending Mouth, Kirby swallows up a vending machine that can shoot soda cans to attack enemies or break apart obstacles. Cans that are shot on the ground can also be picked up to replenish ammo. There's also Cone Mouth, which has you enveloping a traffic cone to become a powerfully sharp spike. You can use it to break blocks and attack, and sometimes even pierce cracks in the group to reveal unusual secrets. The latest mode revealed is the brand-new Dome Mode, which lets Kirby take over dome shapes in order to wriggle them off of items hidden underneath. 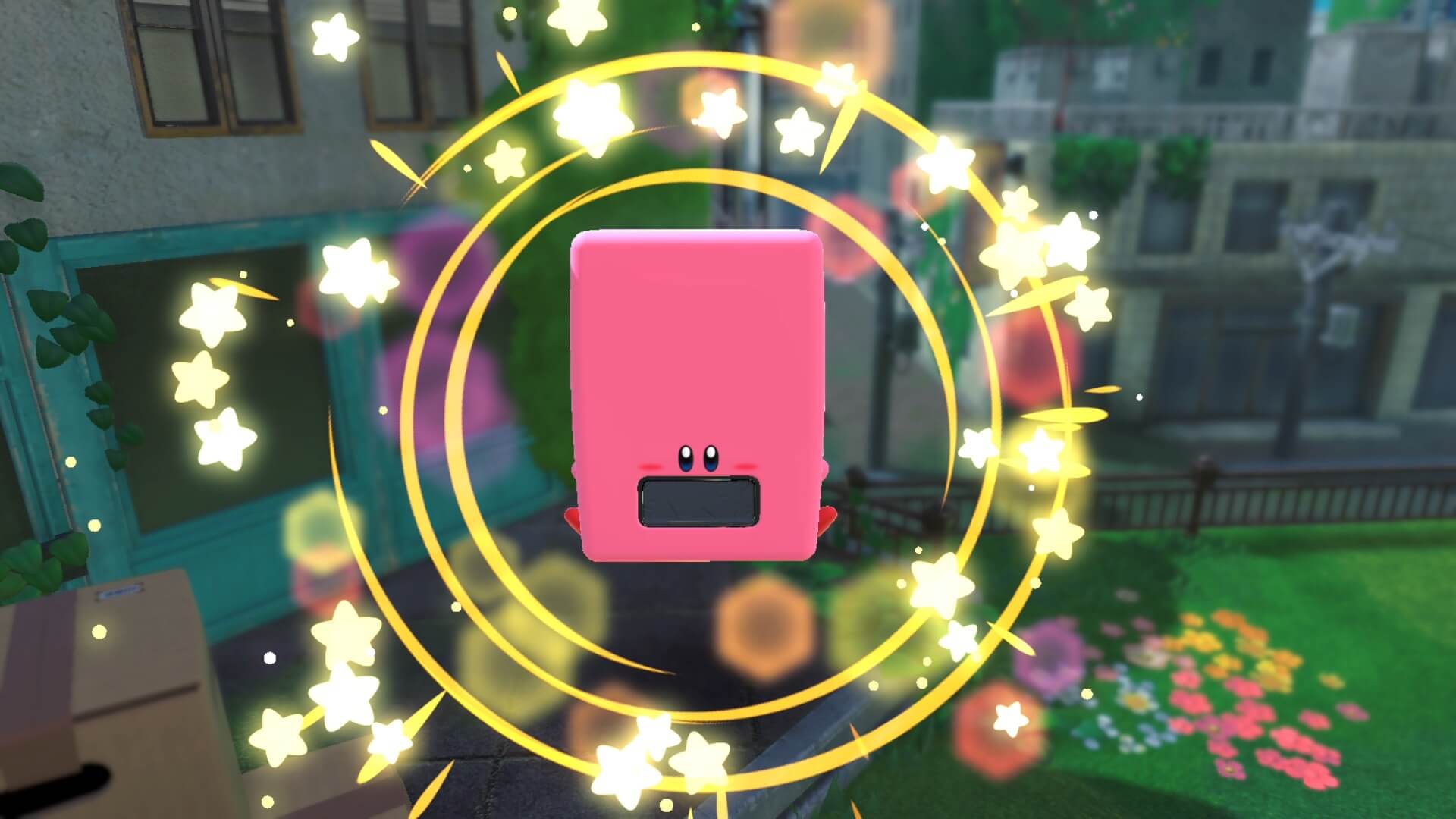 And since you can't stay in Mouthful Mode all of the time, the game comes to revolve around strategically swapping between Mouthful Mode and your Copy Abilities. Using them in powerful combinations will help you progress and uncover new areas. The ones we've seen so far are so fun, and we can't wait to see what other Mouthful Modes the game has to offer.

Can't get enough of Nintendo Switch games? Click HERE for some tips on how to complete your Research Level 10 Pokédex in Pokémon Legends: Arceus the fastest.