Marvel.com Video Host Lorraine Cink Tells Us How She Turned Her Love for Marvel Into a Career

Lifelong Marvel-lover Lorraine Cink has managed to turn her passion for the comic book publishing company into a career.

She hosts three weekly online shows for Marvel and co-authored a book on everything you need to know about the company and its iconic heroes.

Of course, getting there didn't happen overnight. We got to speak with Lorraine all about what it took to become a face for Marvel, plus her advice for nabbing your dream job.

Sweety High: Have you always been passionate about Marvel and its characters?

Lorraine Cink: Totally, though it definitely ebbed and flowed as I went through different phases. I grew up surrounded with Marvel comics, animation and video games from a young age thanks to having a brother five years older than me. It was how we bonded and spent time as a family.

I went to my first comic convention at the age of 11, and haven't looked back. I think different characters have resonated with me at different times. The ladies of the X-Men made me feel like I could be a leader. Phoenix, in particular, made me feel that even though I was young and inexperienced that I might hold untold power. And of course, Spider-Man, was my first big crush. What can I say? I love a funny guy.

SH: When you were a kid, could you have ever guessed you'd be working for Marvel?

LC: Never! It was the kind of thing I never thought was possible. I'm from a small-ish town, and I didn't really realize how big the world was outside my window. There are so many careers that exist that you would never think of being accessible or even existing, but they do. I wish I could tell 14-year-old me. She would lose her mind.

SH: How did you come to be in the positions at Marvel that you have now?

LC:  Before working for Marvel, I was a comedian with a day job in marketing. My friend Michelle and I would make YouTube videos about nerdy internet stuff, largely for our own amusement. One video that got Marvel's attention was a song I wrote called "Ode to a Geek Boy." The kind folks at Marvel invited me to come in for an audition to be an on-air host seemingly out of the blue and I booked it. Simple as that.

But like most people who are "an overnight success" I spent years in dusty black box theaters making comedy and theater and writing and making tens or maybe even hundreds of videos before anyone got around to noticing me. Those years of improv comedy made me quick on my feet, which is invaluable for hosting—you always have something to say and a way to make things fun—and writing comedy articles and sketches prepared me for churning out three web shows a week.

Today, I write and host our weekly news show "The Marvel Minute," where I break down our biggest stories of the week in just one minute. I also write and host our weekly comedy variety show "THWIP! The Big Marvel Show" with my co-host Ryan Penagos, aka Agent M. We play games, interview celebrities and hijinks ensue. We basically have the most Marvel fun ever. I also write and produce out "Marvel Top 10" series that ranks Marvel heroes, villains, storylines and more. Basically, I just have the most fun ever. It's ridiculous. I still can't believe this is my job.

SH: How did the opportunity to write a book about Marvel arise, and what was that experience like?

LC: DK Publishing reached out to me about co-writing their book Marvel Absolutely Everything You Need to Know on a recommendation from a colleague and internet pal who was familiar with my work. It's sort of amazing how much social media has changed the course of my career. Reminder: Be nice to people because not only can you make friends, but it can make your life awesome.

As for writing a quarter of the book, which I shared with three other amazing writers and our incredible editor Alastair Dougall, it took a ton of discipline. I already am working all week long to make awesome Marvel shows, so I had to be creative with my time. I can only really have concentrated writing when I first wake up (my brain is too tired at night), so I would get up at 5 a.m. and write for about four hours before work every day that I possibly could in order to reach my deadlines.

That can be hard when you have movie premieres, live events—and you know, something resembling a life—but finishing feels euphoric. And getting to sign my own books after being to a million comic book signings as a fan felt very special. Handing on my fandom to new fans feels so rewarding.

SH: Who's your favorite Marvel character?

LC: I unabashedly love Squirrel Girl, even before her incredible series by Ryan Q North. I love an underdog—or undersquirrel—as the case might be. She has always been treated as a sort of comedy character or a joke, but with her untold squirrel super powers she has bested Thanos and Doctor Doom, who are two of Marvel's most titanic villains. Furthermore, she can win any battle with muscle, but she always tries to first solve the problem with her mind and her heart. We should all be more like Squirrel Girl. 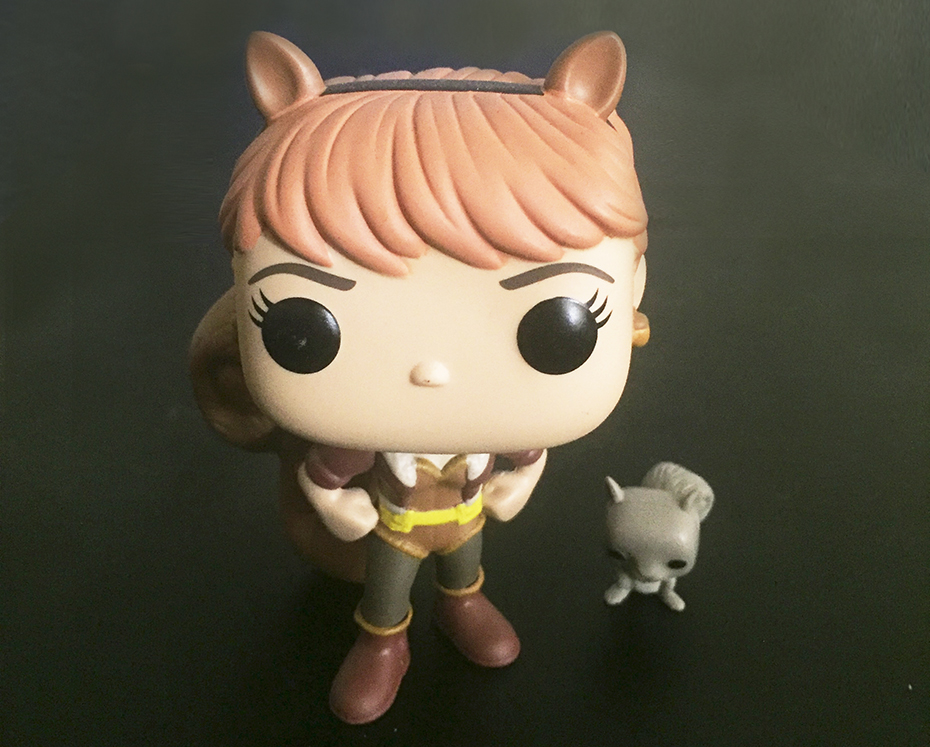 SH: Do you have a favorite bit of random Marvel trivia?

LC: There is so much. The Hulk was supposed be grey, not green. Thor's first weapon wasn't a hammer, but an axe named Jarnbjorn. And one of my favorites—when the Black Widow first took to being a hero instead of a villain (spying on Tony Stark for the KGB), her look included a mask, leotard, fishnet body stockings and a cape instead of the traditional black jumpsuit. It's a hilarious look that was way more Lady Gaga than it was superhero.

SH: What advice do you have for girls who someday want to do a job like yours?

Early in my career I was always waiting for someone else to give me jobs or opportunities, but once I made my own opportunities the world opened up to me and began to make me offers. Don't be afraid to work hard and put yourself out there. And remember, if people are ever snarky or mean about it:

1. Instead of letting it hurt you, try to have empathy and pity for them being a not awesome person.

2. You are probably honestly on your way to doing something awesome. You are making people feel stuff and that is usually a really good thing.

And lastly, find your voice. Be you. No one is like you, so you will always be interesting, and because above all people respond to truth.

Reach out to me on Twitter! I'd be happy to talk to anyone who wants to know more about Marvel, working in the industry, or just wants to be best-best friends.

You can catch Lorraine on the "Marvel Minute" every Monday, "THWIP! The Big Marvel Show" every Tuesday and "Marvel Top 10" every Friday on Marvel.com and youtube.com/marvel. You can also follow her on Twitter @lorrainecink.

Want to bolster your own Marvel knowledge? Click HERE to read about our favorite underrated Marvel superheroines.