Lost Words Is a Brilliant Narrative Game About Love, Loss and the Healing Power of Creativity

When I got the chance to play a bit of Lost Words: Beyond the Page at E3 back in 2019, I was instantly hooked.

The game, with a story developed by talented games writer Rhianna Pratchett, takes place entirely within the journal of a girl named Izzy. Within this journal, she documents her life and starts writing a fantastic tale of magic and discovery, only to have the story shift dramatically when tragedy strikes.

So when I heard that the game released on March 27, I immediately reached out to the team behind the game, who were kind enough to hook me up with a review key for the game on Nintendo Switch. And now that I've had the pleasure of playing the whole game, I can say that it was well worth the wait.

Lost Words begins with a girl named Izzy as she begins writing in the new journal her gran got her for her birthday. She introduces herself, her parents and her baby brother, as well as her beloved grandmother—Izzy's biggest inspiration and most trusted friend.

But this story doesn't just unfold through a wall of text. Not only is it brilliantly narrated, but the words of the journal itself are fully interactive. Within the journal, the words are platforms you run between and leap upon in order to drive the entry forward. You'll traverse the pages, stepping on certain words, touching particular images or even dragging around the letters to complete sentences—or use as a stepping stone to hard-to-read places. A tear in each page will take you to the next, and help you discover more of Izzy's tale. 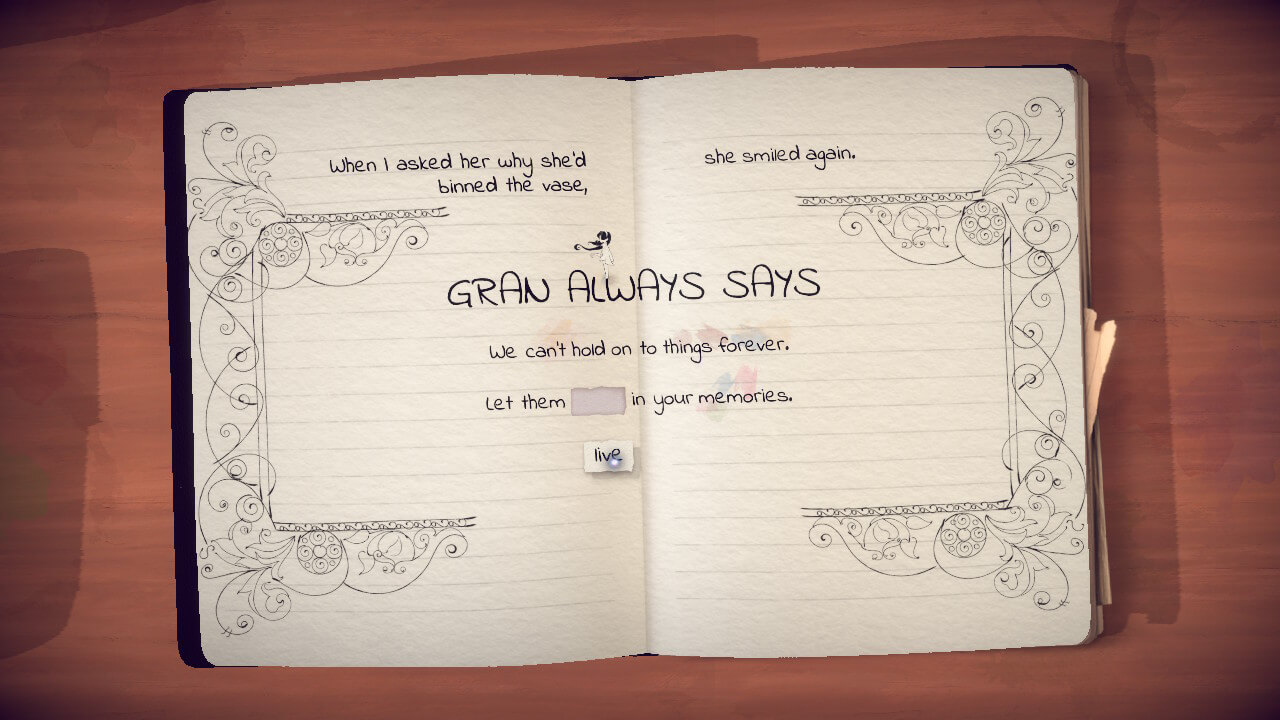 But the game extends beyond the journal itself when Izzy is inspired to start writing a creative story within it. With a little help from the player, she creates the magical world of Estoria, in which we spend much of the game.

Izzy's tale of the land of Estoria is a bit of a self-insert fic, following a girl much like Izzy who lives in a treetop village and works as an apprentice to Elder Ava, the Guardian of the Fireflies. It's not long after the start of the story that Elder Ava retires, and on her birthday, the girl has the title passed down to her.

In these sections, the game becomes a bit of a platformer, with a few puzzles thrown in for good measure. Izzy's OC can run and jump and push blocks to get where she's going, but her greatest power actually comes from the spellbook she gets as the new guardian, where she can collect magic words. Early on, she gets the powers of "Rise" and "Repair" to lift fallen objects and mend broken bridges, but she learns and more over the course of the game. After all, Izzy is a writer, so it makes sense that she believes that the written word is magic. 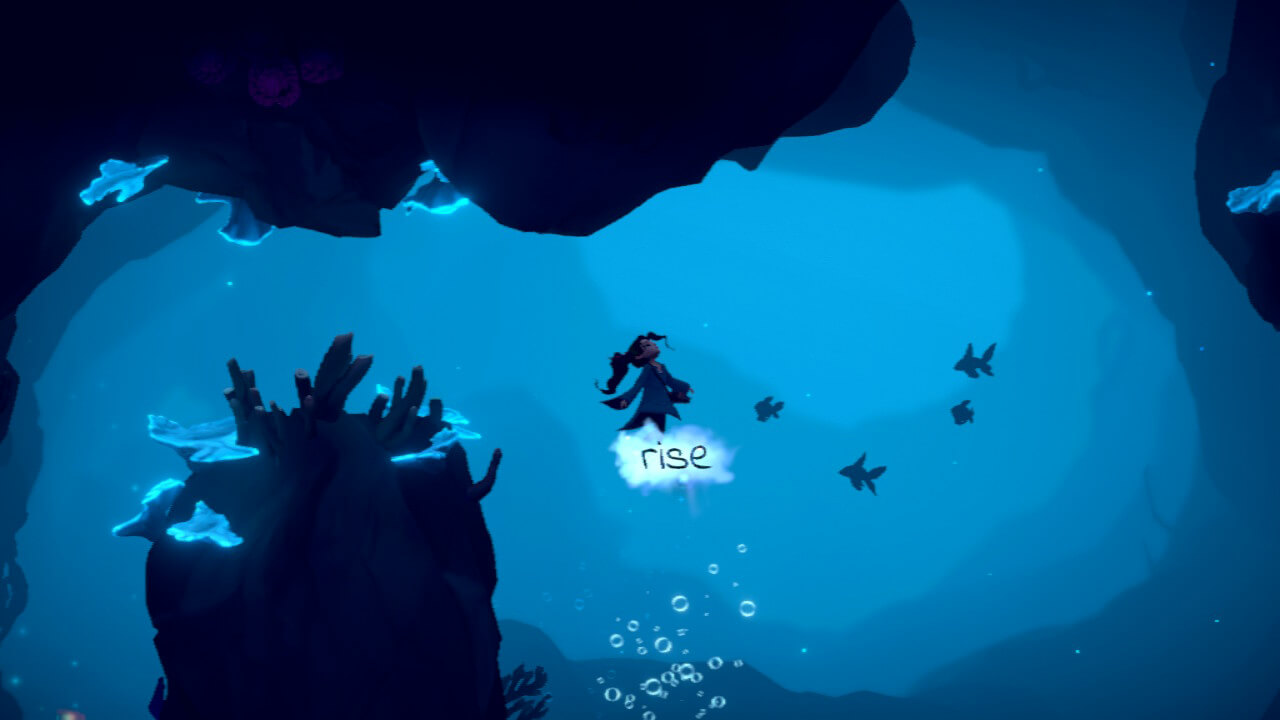 Beyond employing your spellbook, certain narrative decisions you make will also impact how the story is told, such as picking the protagonist's name (I chose Robyn) and selecting the color of dress she wears. Other times, it'll impact things like the motivations of the characters you run across during your adventure, meaning you can get slightly different versions of the story each time you return to it. 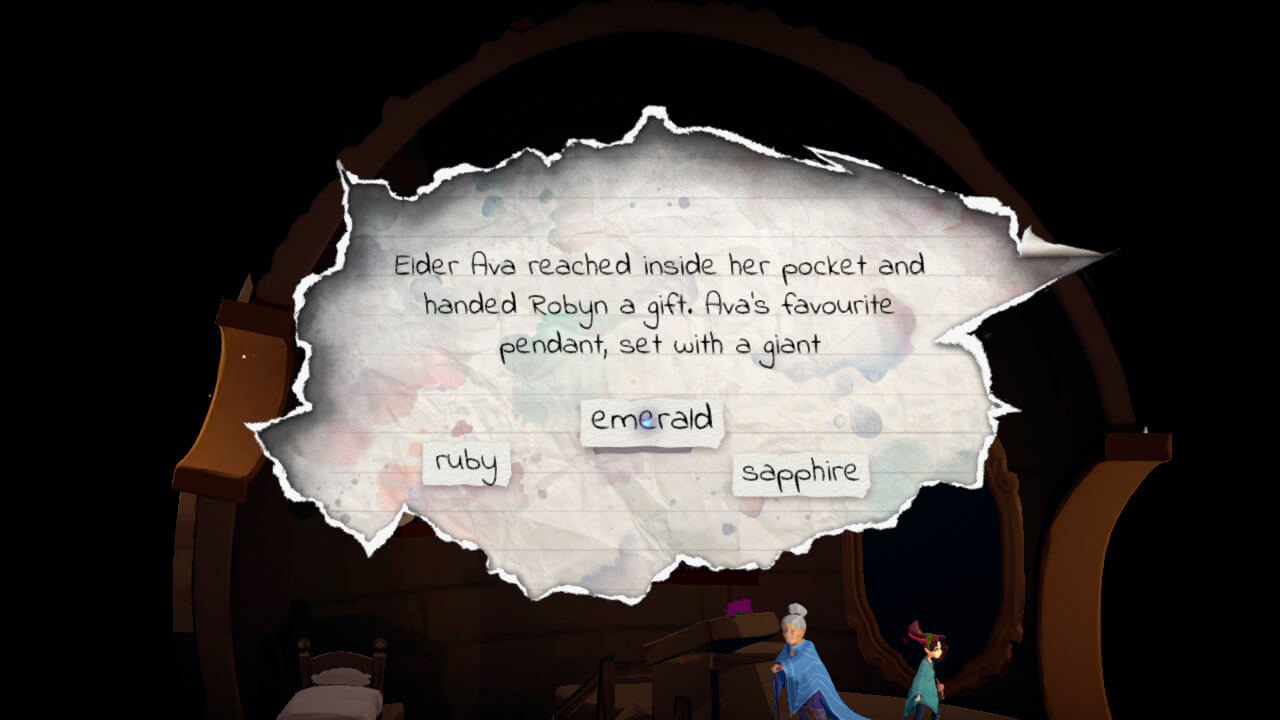 Izzy's world gets turned upside-down when her gran experiences a stroke, sending her to the hospital. It's tough for Izzy, who doesn't quite know if the grandmother she adores will ever be the same again, and her uncertainty and pain is clear not only in her journal entries, but where she takes her Estoria tale next. 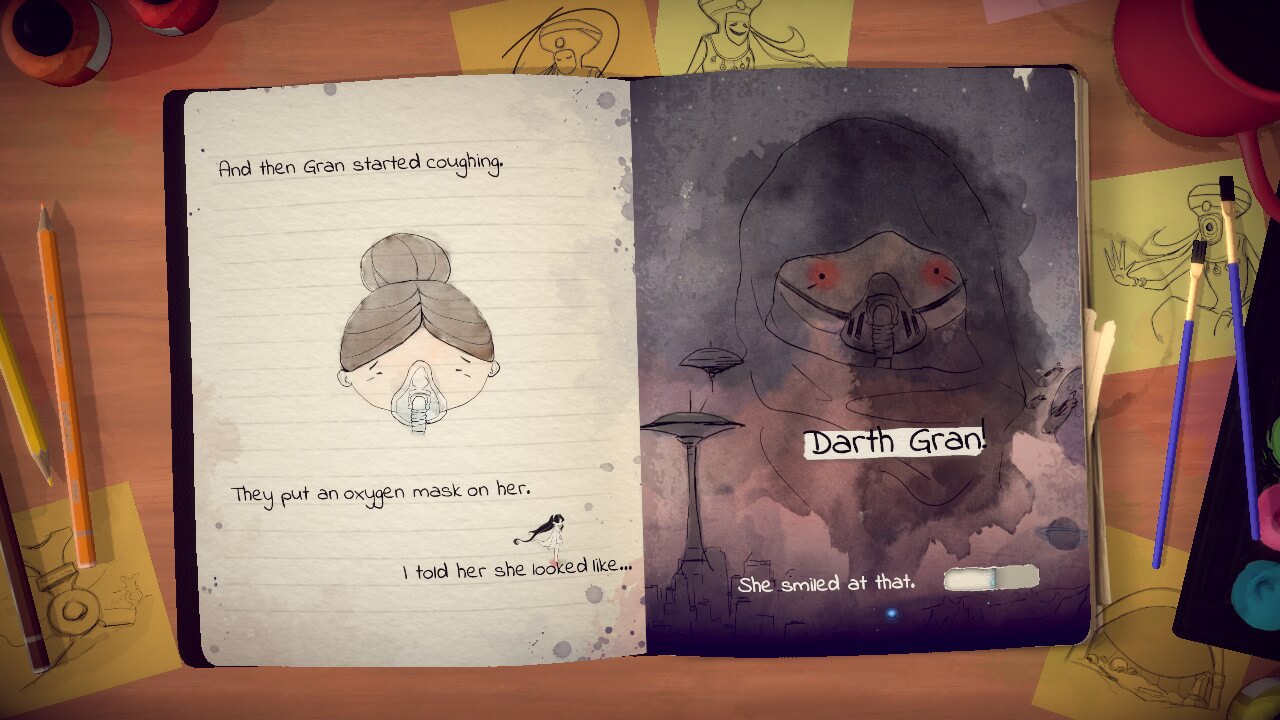 Soon after the gran's hospitalization, a terrifying dragon attacks Robyn's town, causing destruction everywhere she looks. And not just that, but the fireflies who grant Robyn her power have been lost in the process—and just after she was entrusted with them. She makes it her mission to travel the lands, collect all of the fireflies and restore order to the land. As you play, traveling through deserts, volcanoes, icy tundras and more, you'll want to explore every nook and cranny and not push along too quickly in order to find every lost firefly hidden in the game. You'll be rewarded if you're thorough. 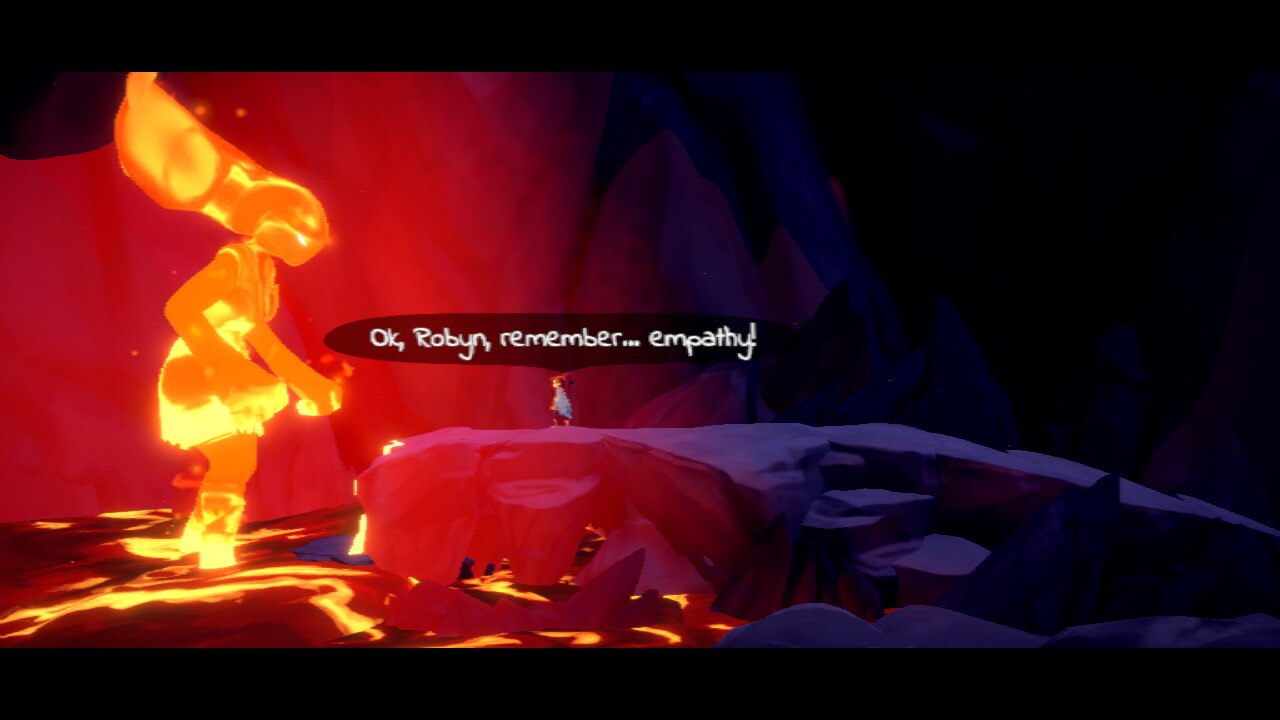 As Izzy continues to record her gran's progress with all of its ups and downs, as well as her personal struggles, her story also has peaks and valleys of hopeful moments and despair that track how she's feeling on the inside. You also find that in times of despair, some people just need a friend and a listening ear. An unfriendly djinn feels guilt about the people he failed to protect, while a fiery, rage-filled giant named Lump just needs a pal and a little kindness.

There are also deeper messages at play here, about how difficult it can be to accept change in our lives, especially when we blame ourselves for how things turn out. But even though we all go through loss, and many times there's nothing to do to stop it, we can always move on and build something new. Lost Words captures that sentiment perfectly.

Lost Words is a love letter to writing and creativity, and while its puzzles probably won't leave you scratching your head, and the platforming isn't exactly a challenge, it's a worthwhile adventure nonetheless because of the brilliant story that unfolds within it. I was able to complete it in a little under four hours, and it was well worth the time—especially seeing as I had tears in my eyes by the very end.

Up until the very conclusion, it kept me guessing as the journaling sections continued to surprise me by turning familiar mechanics on their heads. Never did it feel like the story was dragging or it was retreading familiar territory, and though it would have been nice if it were more of a challenge, the accessibility and ease should mean no one will have to give up and never get to see the conclusion. However, I did play on the Nintendo Switch, and I think some functionality of the system is underutilized. Some of the dragging around of words in the journal, as well as the story sections, would have been a perfect integration with the Switch's touchscreen functionality.

But most of all, I was struck by the story, which managed to be touching, heart-shattering and left me feeling hopeful—as well as eager to do some more writing of my own.

Lost Words is available for PlayStation 4, Nintendo Switch, Google Stadia, Windows and Xbox One for $14.99.

Eager to build up your Switch library? Click HERE for a list of our favorite inexpensive games on the Nintendo Switch.