I Tried the Mermaid Eyeliner Trend—Here's What Happened

At least, I thought I was… until I tried the "mer-liner" makeup trend that has been floating around Instagram.

I'm always so impressed and intimidated with Instagram makeup, but weirdly, this trend was one I thought I would be able to do, no problem—and I'm not really sure why because it's super intricate. I've taken on some pretty odd challenges, like dunking my face in cold water to set my makeup, and wearing two different colored eyeshadows, so I thought, "I've got this mer-liner in the bag."

I'd like to preface this with noting I am in no way shape or form a makeup artist. I'm just a girl who likes to try new things, especially with beauty. So… here's what happened!

I started off by priming my lids with Smashbox's 24 Hour Photo Finish Shadow Primer, and then added a basic cream bone shadow to my entire lid. 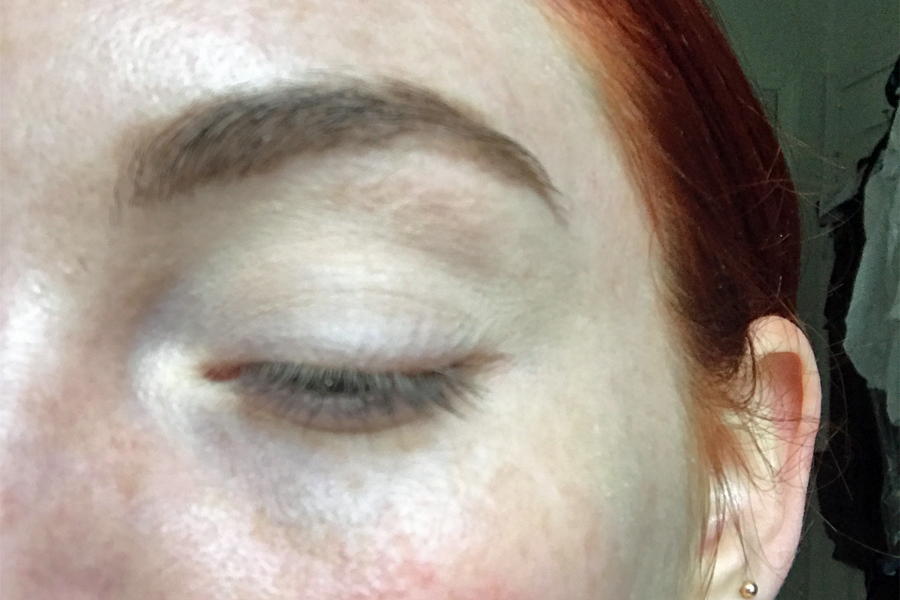 Then, I applied teal eyeshadow with a small shadow brush-like thick eyeliner on my top lid. I found this teal shade in a random Too Faced palette that I had at home, and it looked almost identical to the picture. 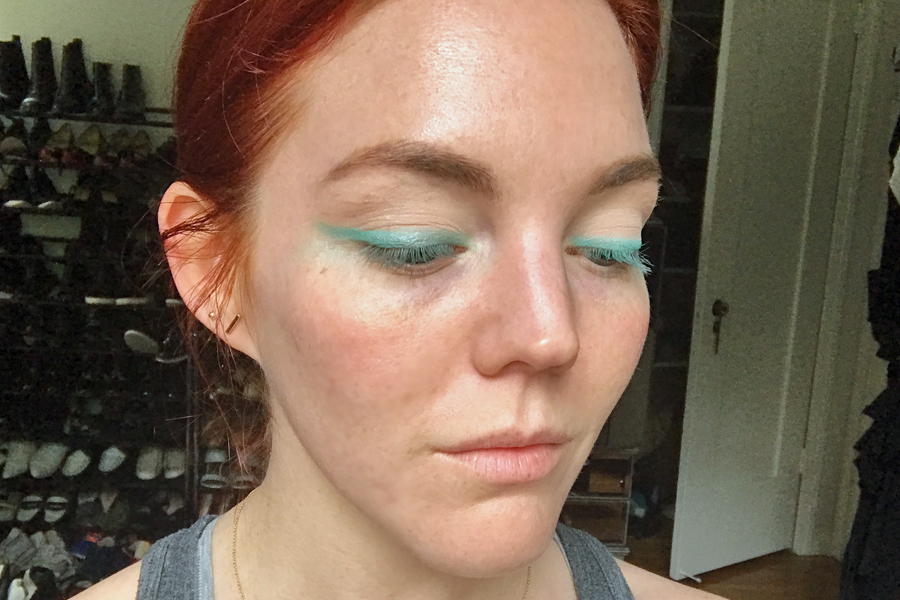 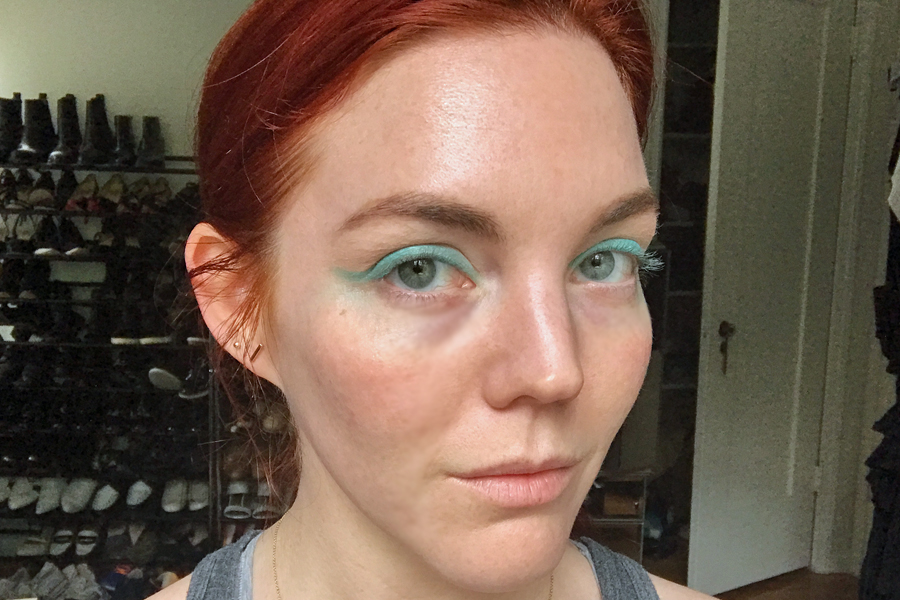 In order to mimic that mermaid scale, iridescent look, I layered on some shine metallic pinks and greens on top of the teal shadow to add depth. It didn't quite turn out as shimmery and cool as I hoped, but everything was still going pretty well at this point. 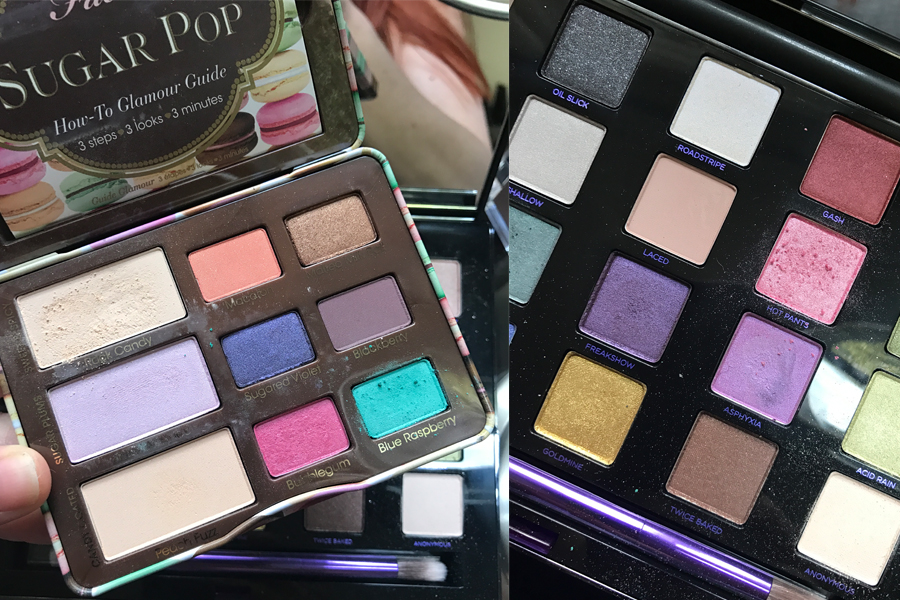 Okay friends, I dreaded this step from the beginning. I'm not the best at doing a cat eye (why did I think I was going to be good at this again?) or applying eyeliner in general, so this step was the first major hurdle. However, I managed to line my eyes with a liquid liner pen, and while they weren't perfect, they weren't terrible either. 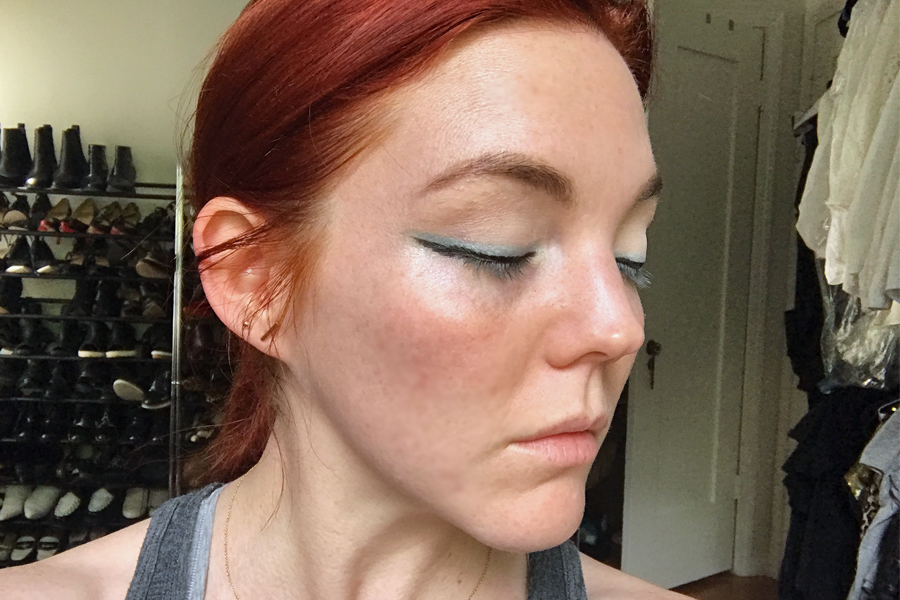 Enter the moment of truth—creating mermaid tail scales on my eyelids. I practiced on my arm beforehand and successfully created mini scales, but drawing them on your eyelids, backwards, with one eye closed proved to be a challenge. 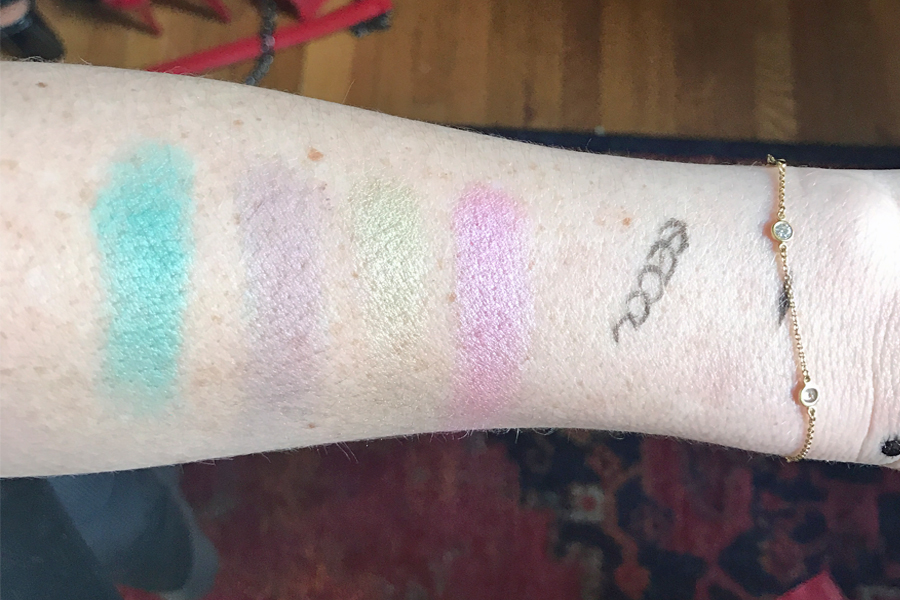 Also, my eyelids are rather wrinkly, and the folds on my eyelids really kept getting in my way, causing them to crease and smudge, even though I was using waterproof eyeliner. Just like lining your eyes, you will find that one side is much easier than the other. Although, I really don't think either side is significantly better than the other. I almost gave up at this point TBH because I was so disappointed with my work. But, I decided to try and salvage my mer-liner. 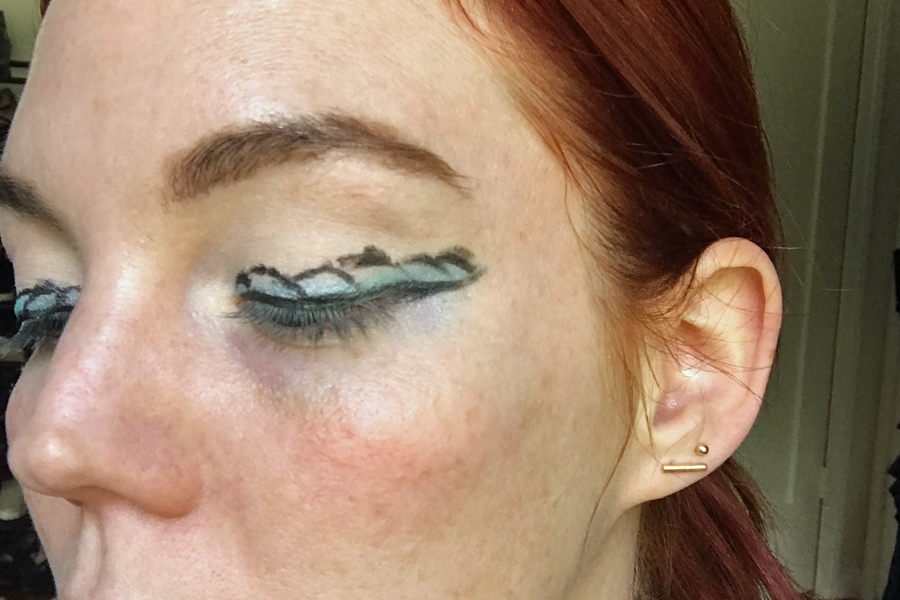 I tried to make the scales pop by using a small liner brush to add more color in between the lines. This actually helped a lot and made the whole look more cohesive and less messy. 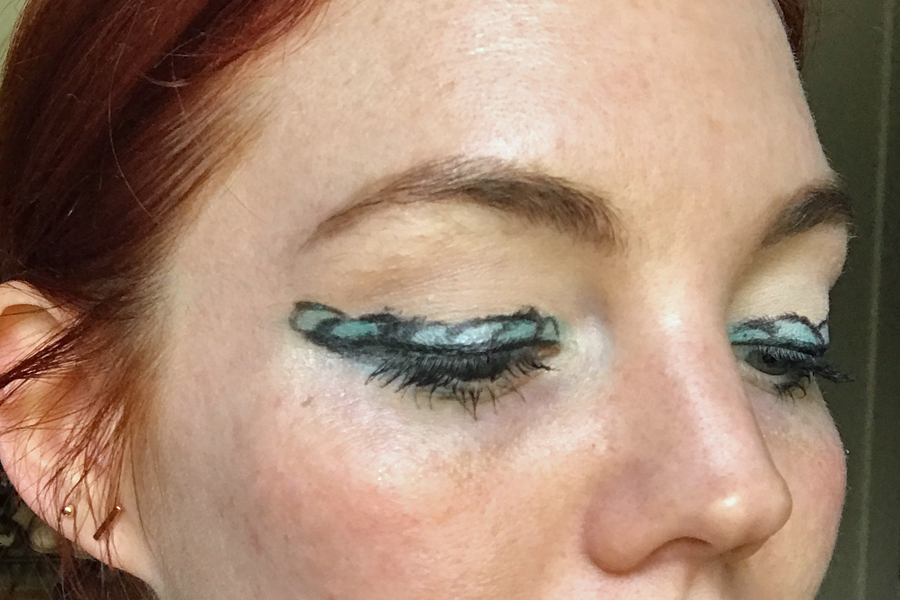 I reapplied a coat of eyeliner to my lid, put on a ton of mascara, and cleaned up my scales with a Qtip in hopes of everything looking better. What do you think of my final look? 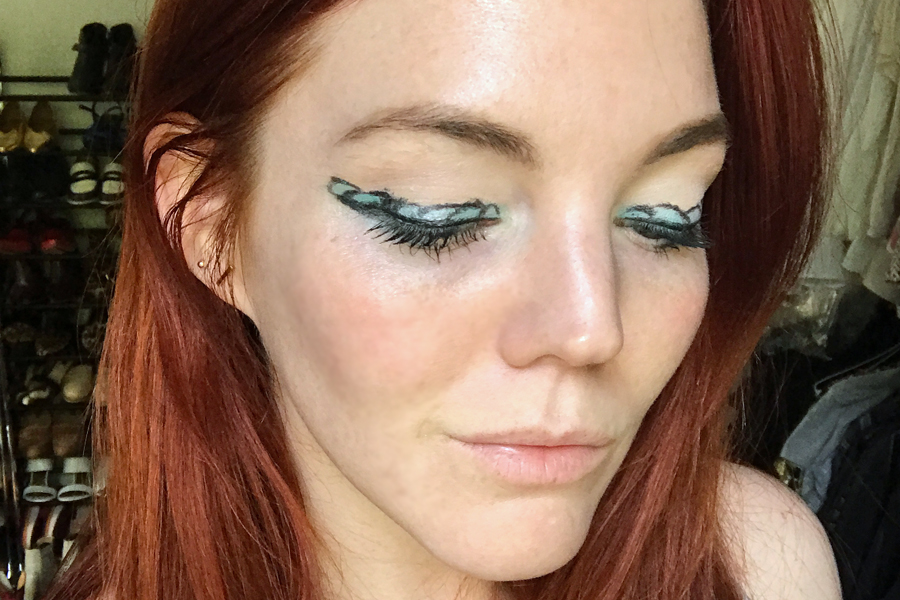 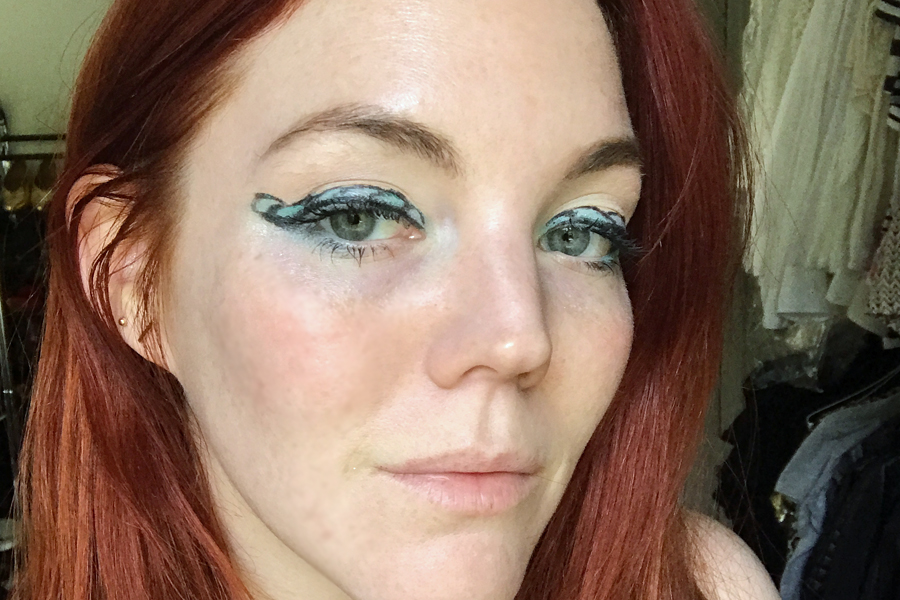 Personally, I think the most mermaid thing about this look is my bright red hair… And I probably wouldn't do this look again because it's not really my vibe. But, I did have fun experimenting and testing out a new look—it made for a fun and creative Saturday afternoon!