Yesterday, we shared an interview with Supriya Hobbs, co-founder of Miss Possible, a company that makes dolls of real female role models from history, which you can read here. Today, we're sharing even more info on Miss Possible and upcoming dolls! 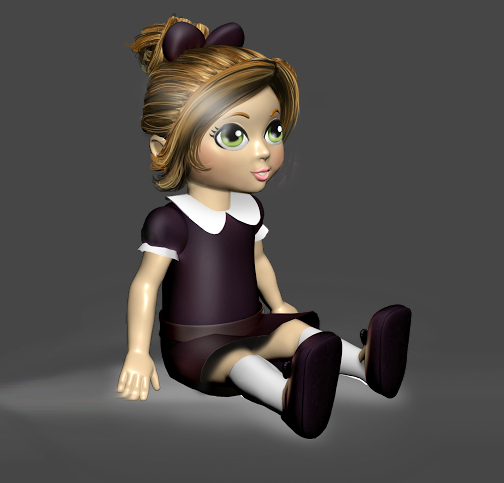 Miss Possible stands apart from other dolls that already represent women as scientists, leaders and other important figures, because the company highlights real women who changed the world.

"I don't think anybody's tried to do it quite the way we are," Supriya said. "It doesn't seem like that crazy of an idea if you ask me."

To the creators of Miss Possible, it was important that the dolls show girls real examples of women who left a lasting impact.

"They say 'You can't be what you can't see,'" Supriya explained. "If we don't see role models that look like us, that are women or that we can really relate to in some way, it's much harder for us to imagine ourselves in those positions."

It was also crucial that they do this by highlighting real women, rather than creating dolls that are supposed to represent every female in her field.

"We just characterize one important woman, and in that way, we get away from some of the issues of generalization," she said.

While she didn't necessarily use her chemical engineering skills directly in running Miss Possible, her background was a major inspiration for its creation.

"Engineering's all about problem solving, and that ties in so well with entrepreneurship," she said. "There's no way you can start a company without running into and solving a lot of problems."

The Miss Possible crowdfunding campaign on IndieGoGo far more than its 75,000 goal. With the money raised, the Marie Curie doll will go into production!

Marie Curie was a physicist and chemist who was the first woman to win a Nobel Prize. To date, she is the only person to win twice in multiple sciences!

"Part of the decision was because I am interested in chemistry," Supriya said. "I studied chemical engineering and so I have a vested interest in her story."

Not only does Curie have a recognizable name, but her story is remarkable, given that she was denied an education because of her gender.

"Girls weren't allowed to study where she grew up," Supriya explained. "To go from not being allowed to go to school to being one of the foremost scientists in the entire world is just incredible. I like to think that most of the girls that are going to get our dolls have far more opportunities than that."

Supriya hopes that Curie will serve as a role model to girls. If Curie was able to achieve all she did, despite her circumstances, then the girls who look up to her can, too.

Fans of Miss Possible have also been eager to suggest women who could be the subject of the next doll. One woman they often request is Rosalind Franklin.

"She helped discover the structure of DNA and was very famously passed over for the Nobel Prize, while Watson and Crick are the ones that are credited with it," Supriya explained. "It might be a little late, but it'd be great to give her her 15 minutes of fame as soon as possible."

Many Miss Possible supporters would also love to see Jane Goodall added to the lineup.

"She's still living, and I think that means there are opportunities for partnerships," Supriya said. "I truly hope she'll let us make a doll of her. She's a wonderful role model."

Of course, before that can happen, the team would need her approval! There are a few legal questions that arise when you plan to make dolls of real people. The subject has to have been deceased for a certain amount of time, or permission has to be granted to use their name and likeness.

"I think that might have presented an obstacle that wasn't worth overcoming, to some people," Supriya said.

The Miss Possible team has overcome that difficulty by doing lots of legal research.

"Our first few characters are women who have been deceased long enough that their publicity rights weren't an issue for us," she said.

Featuring women from the present and recent past will be more of a process.

"We will likely have to start worrying about paying royalties and then personality rights for more recent women, because that's a lot of the demand we're getting," she said.

"We're really aiming to show a lot of variety in careers," Supriya said. "We started in the science, technology, engineering, and math fields largely because women are so underrepresented in these areas."

Pre-orders a Miss Possible doll on their website here! Marie Curie dolls will arrive in January of 2015.

Learn even more about Miss Possible on their social pages below, and tell us about your own favorite women in history in the comments below and at Sweety High. If you missed it, also check out part 1 of our interview with Supriya Hobbs!