I was instantly curious about the Día de Muertos-inspired shooter Morphies Law when I spotted it for the first time in a Nintendo Nindies Showcase a couple of years ago. 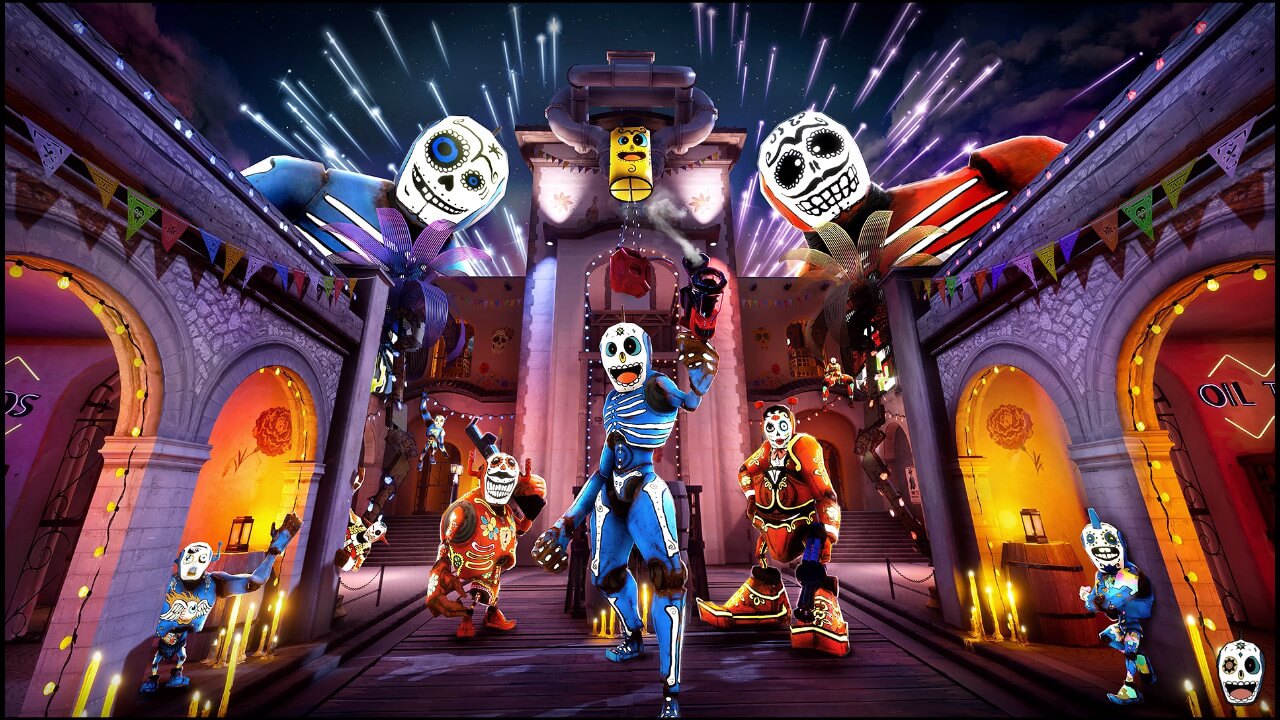 Somehow, the game came and went without much ado when it released last year, and I missed it completely. That's why I was thrilled when I was asked to check out the newly updated, fully souped-up version of the game called Morphies Law: Remorphed on the Nintendo Switch. After receiving a review code, I've had a ton of fun with the game, and here's why I think you should check it out, too.

The Premise Is Brilliant

Even if the controls in shooter Morphies Law: Remorphed feel familiar (it feels a lot like Splatoon 2), the premise is completely original. While it certainly can help, defeating the most enemies isn't the name of the game. Instead, your primary goal is to build up your skeletal avatar's mass.

If you laser your enemy in the head, for example, your own character's head will grow. In fact, there are eight different body parts that can grow or shrink in the game. According to your performance, and depending on how you play, you might wind up with a hilariously overgrown upper body, or a strangely massive left arm. Of course, your enemies can do the exact same with you. 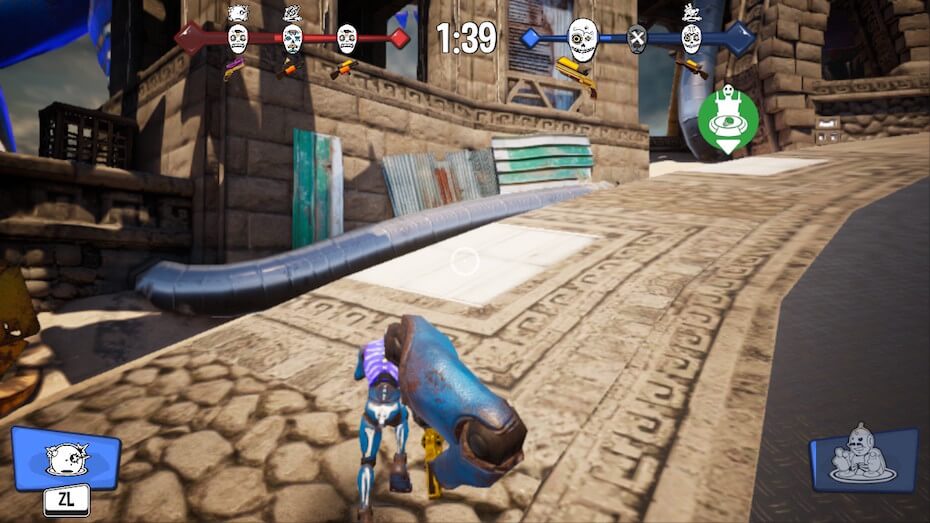 Further, the size of your parts also affects your abilities. The bigger your legs, the higher you can jump. The larger your lower half, the more powerful your butt-rocket becomes, allowing you to float temporarily in the air. The larger your chest, the more health you have. This makes every strike against the enemy a strategic one in an attempt to gain the stats that suit your gameplay. You can even borrow mass from your teammates (as long as you're both on the same page).

Your size also has implications for navigation. If you're tiny, you can travel through pipes or creep through tiny passages that would inaccessible if you were bigger. Being massive gives you the heft to knock down obstacles as well as walk past heavy-duty fans that would blow lighter players off course.

Thanks to its four different gameplay modes, you can play Morphies Law: Remorphed for a long while before it ever starts feeling stale. These typically consist of four-on-four matches, with a red team facing off against a blue team.

First, there's the classic Morph Match, which is all about making your team's giant avatar grow as big as possible. This is achieved by dealing as much damage to your enemies as you can while avoiding getting hit yourself, and is perfect for getting the hang of the nuances of Morphies Law. 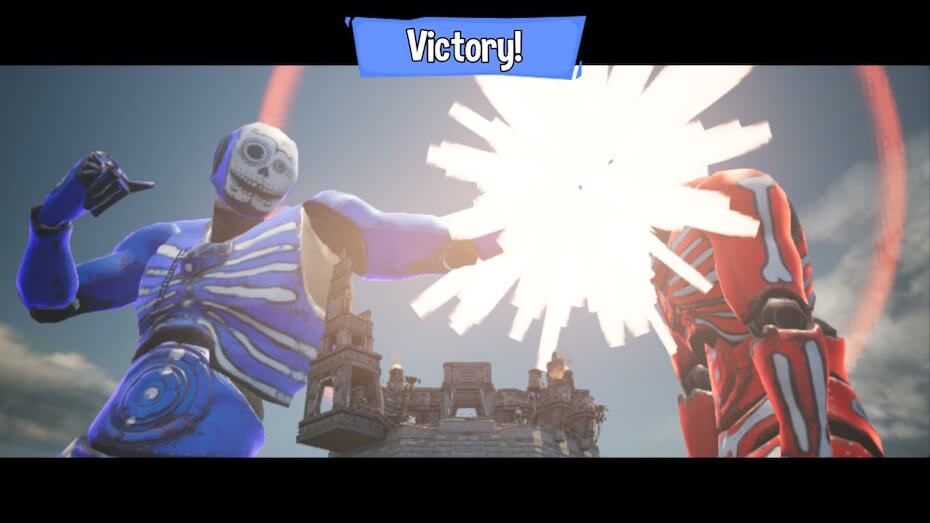 Next is the Head Hunt game. In this mode, both teams' big skeleton avatars are missing their heads, and each side's mission is to collect a skeleton head and bring it back to their home base while preventing the other team from doing the same. The bigger you are, the easier it is to carry the head, and if you shrink down too much, it's even possible to be crushed by the weight of it. You win the match by keeping the head at your base for as long as possible, and at the end of the round, the victorious team's avatar is crowned with the head.

Mass Heist is interesting because it's still about accumulating mass for your avatar, but the players have to participate more actively. By stepping on shining altars, players contribute any extra mass they've accumulated to their team's avatar, turning the game into a mad dash to get big and then run to the active altar before you're defeated, losing any precious size you've gained along the way.

Lastly, there's my personal favorite, The Master, which is all about being the biggest player on the map at any point in time. Whoever has the most mass at the moment is crowned with a delightful sombrero, simultaneously your team's avatar to grow. It's not just about being the biggest, but helping your teammates stay big, and knocking the enemies down a peg when they're in the lead. 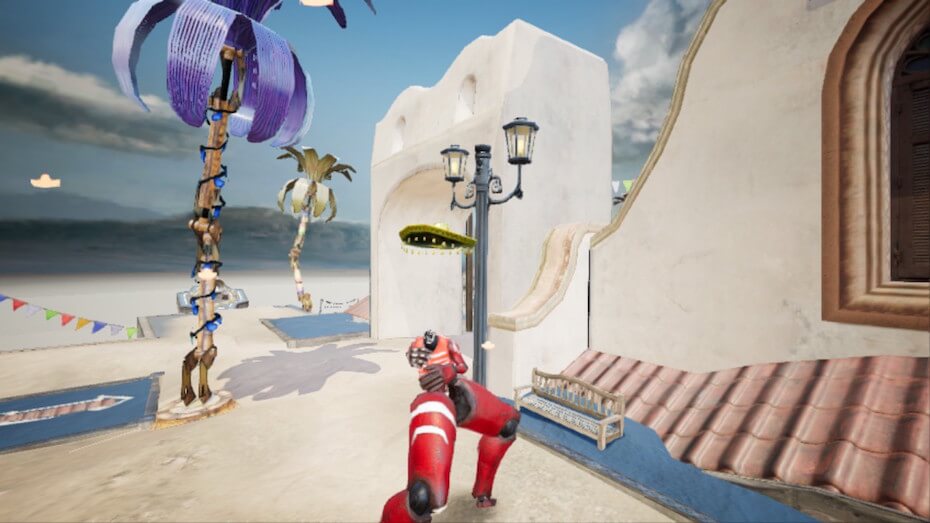 And if you realize you're not the biggest fan of a certain play style, you also get to vote on the mode you want to play before each round, improving your chances of playing your favorite ones every turn. 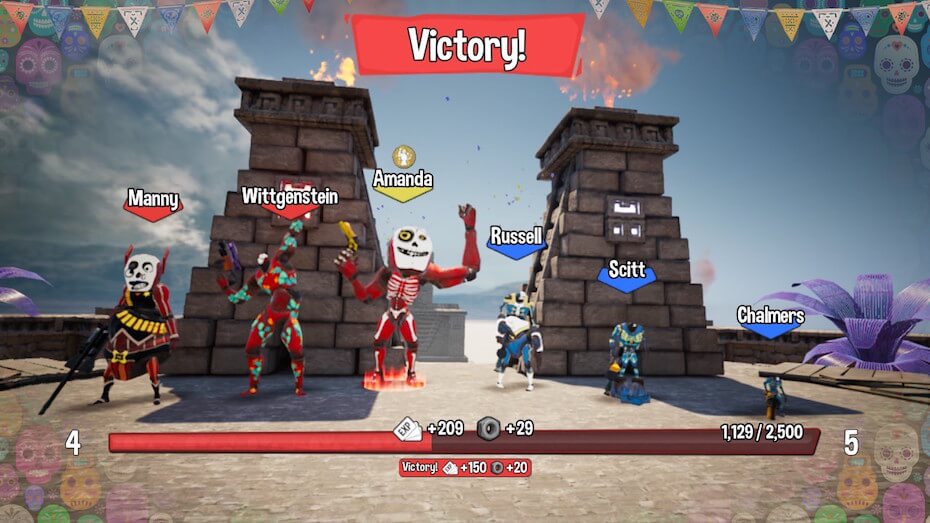 Not in love with the default look of your Morphie in Morphies Law? Then it's a very good thing that the characters are so highly customizable. As you level up, you'll unlock piñatas that grant random cosmetic updates when they're busted open, allowing you to give your Morphie a bit of personal flair. Not only can their face and body parts be upgraded, but you can also give them custom dance moves they'll use before each battle.

One of my favorite little touches in the game is that each player can also unlock instruments, which they play on the loading screen as players join matches. On this screen, the sound of your instrument will combine with those of your allies and opponents to make a unique musical track for that round. 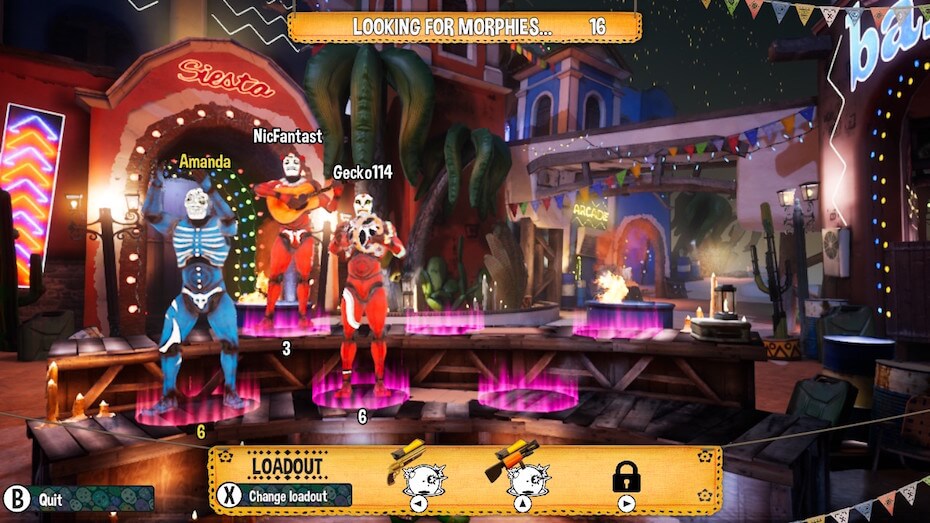 But the changes aren't just visual. They're also customization that's critical to gameplay. The game allows players to pair different base weapons with secondary enhancements in order to suit their gameplay styles in different situations. The more you level up, the more loadouts you unlock which can be accessed at a moment's notice, until you have different weapon setups for any situation the game might throw at you.

You Can Play It For Free

Don't feel like shelling out $20 on the game without trying it for yourself, first? There's a free demo called Fartnight that allows you to do exactly that. It lets you play the game for 30 minutes with all of the features intact—and then after that time, continues to let you play the full game, except all of the sound effects are replaced by rude noises. If you're on the fence about the game, don't skip the opportunity to give it a shot.

I Need More Folks to Play With

Morphies Law: Remorphed is a strange little gem of a game, and more people need to play it. Though the game is designed for four-on-four matches, I've found that most of mine so far have been three-on-three, perhaps because of a lack of available players. It's a little disheartening to see the same usernames appear in the lobby with me day after day, when this game deserves an active and bustling community. Just play it!

Morphies Law: Remorphed is available now on Steam and Nintendo Switch for $19.99.

Love inexpensive indie games on the Switch? Click HERE to find out why we can't put down Forager.