We LOVE Nightfood, the Ice Cream Formulated By Sleep Experts for Nighttime Snacking

I've always had a massive sweet tooth, and recently I've been indulging in a delectable dessert on most nights.

While my taste buds love the experience, my tummy doesn't always agree, and when I overdo it, I find that an irritated stomach also winds up impacting the quality of my sleep. I never even considered that someone might make desserts specifically formulated for pre-bed snacking until the team behind Nightfood reached out to me.

The brand makes sleep expert-approved ice creams that are especially for those who love a couple of scoops of ice cream before bed, and I was immediately intrigued. The team kindly agreed to send me one pint each of their eight flavors, so I put them to the test.

Nightfood is an ice cream brand with eight unique flavors formulated by sleep experts for those who want a chilly dessert before bed without the guilt. To do this, the team removed sleep-disruptive ingredients (like extra fat, sugar, calories and caffeine), and added in ones that aid sleep. This means Nightfood has about half of all of that bad stuff compared to traditional ice creams.

Nightfood also contains added protein and prebiotic fiber, as well as minerals, amino acids and digestive enzymes to make it easier on the stomach. It contains hormone-free milk and zero artificial sweeteners, and is also designed to cause less heartburn and tummy trouble. It does not contain a sleep aid, so while it won't necessarily cure your insomnia, it is crafted to not disrupt good sleep hygiene practices, either.

Nightfood is sold in some stores, retailing for $4.99 per pint, and can also be ordered online. There, individual pints are sold for $5.99 each, while an eight-pint variety pack featuring all eight flavors sells for $47.92 (both prices not including shipping). If it's sold near you, you can also click HERE to find out how you can get a free single pint.

When you want to know the quality of an ice cream brand, you start with their vanilla flavor. Lucky for Nightfood, their Full Moon Vanilla flavor is delicious. Because it's a low-fat ice cream, you'll want to let it thaw on the counter for a bit before digging in, but once you do, the vanilla is rich, creamy and full of specks of vanilla bean. It's exactly what you'd suspect from vanilla ice cream, and is especially good on top of cakes and cookies. If I didn't know it beforehand, I would never suspect that it had just 280 calories per pint. 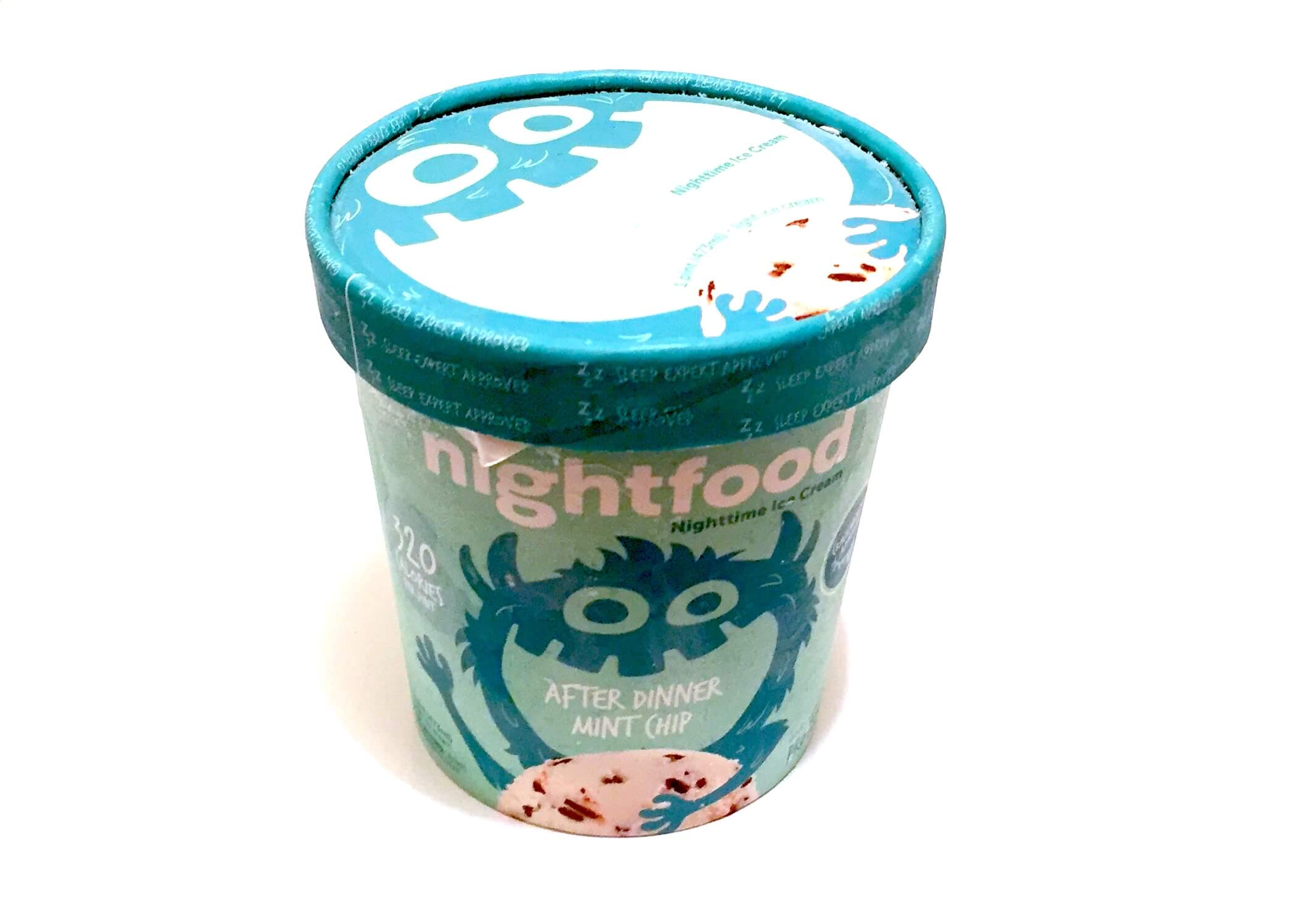 A lot of people find this weird, but I've never been a big fan of chocolate ice cream. I love chocolate, but I often find that ultra-rich chocolate ice creams are too cloyingly sweet for my tastes. Nightfood's Midnight Chocolate, however, is a different story. It has a more toned-down chocolate flavor, which I adore. So if you're a diehard chocolate ice cream fan, this might satisfy you, but if you prefer something like a chocolate Frosty from Wendy's, you just might fall in love with this flavor—and at 280 calories per pint, it's worth every tasty bite. 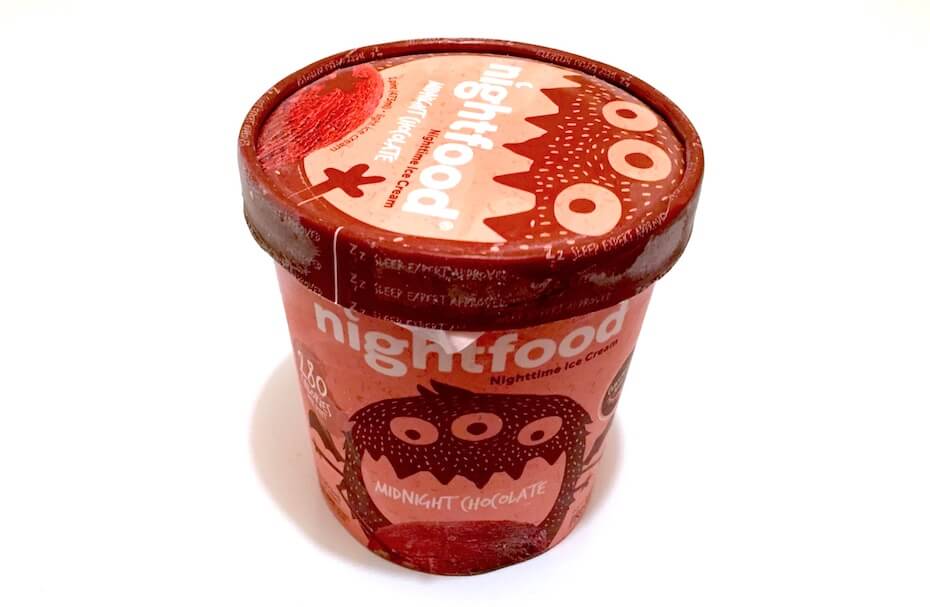 I couldn't believe my luck when I saw that Nightfood had a Cold Brew Decaf flavor. As a coffee-lover who can't actually have coffee because of a caffeine sensitivity, I never get to have coffee ice cream, and this special pint was everything I wanted it to be. The coffee flavor was strong and bitter, with just the right amount of milk and sweetness behind it, making it difficult not to scarf down all at once. Even if I had, the whole pint was only 320 calories so I wouldn't have felt too guilty about it. 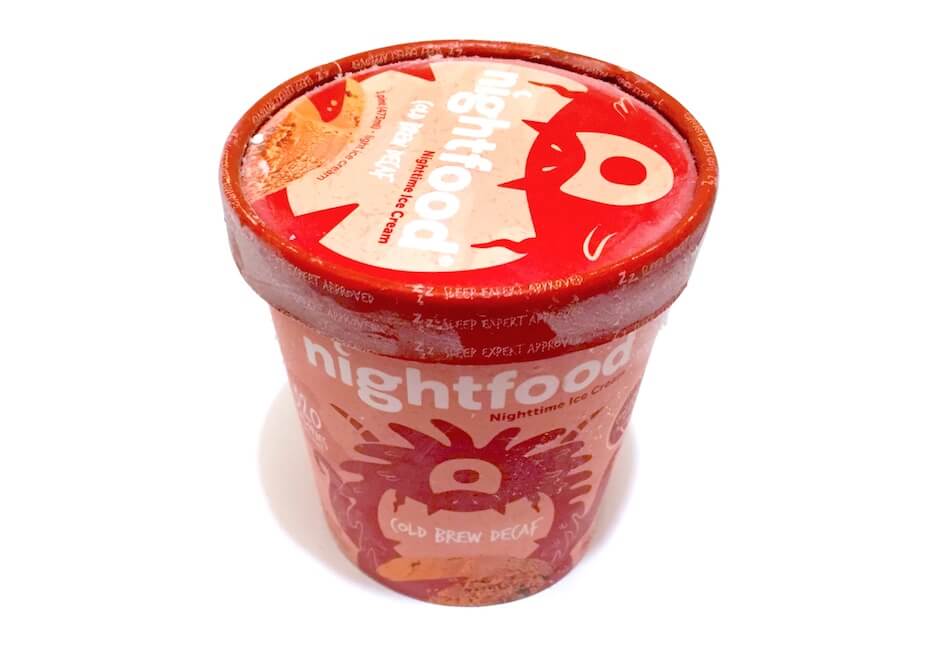 My family has recently been addicted to cherry ice cream, so I had to have them try the Cherry Eclipse flavor with me, and it was a hit. The cherry ice cream itself is party sweet, partly tart, but fully rounded out with fruit flavor, and the bits of cherry embedded within bring out that sweet and sour aroma even further. The addition of dark chocolate slivers also perfectly complement the cherry, making this the most complex flavor of the bunch. At 400 calories per pint, it ties for the highest Nightfood calorie count while still having about half the calories of the competition. 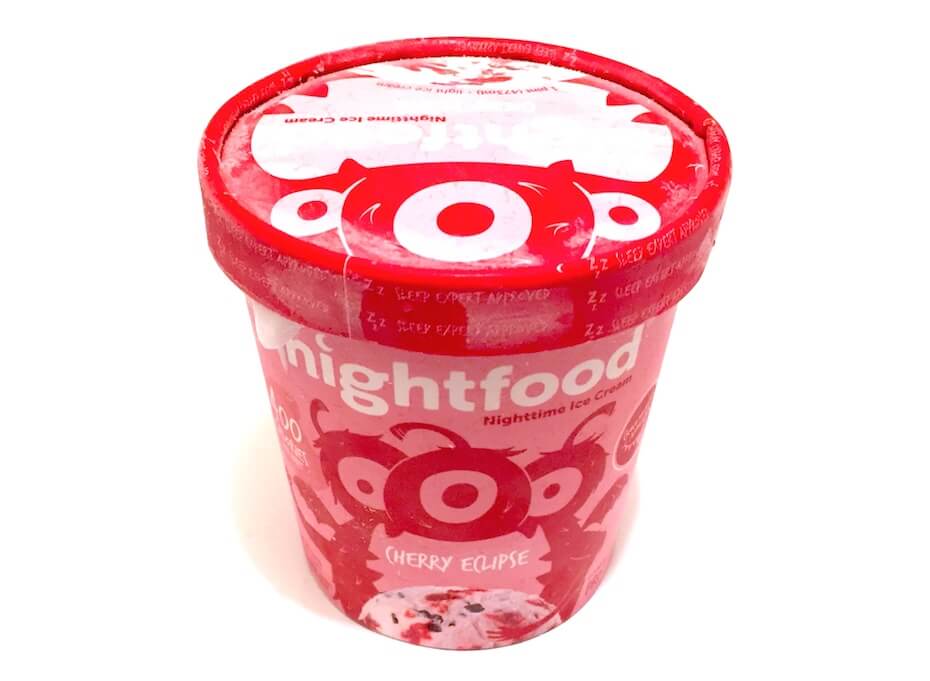 The After Dinner Mint Chip was so good that it was demolished in about 10 minutes. The strong, fresh mint flavor is reminiscent of an Andes Mint or York Peppermint Patty, pairing perfectly with the mint chips inside. Some mint find the mint to be too much, but I found it irresistible. Plus, the pint only contained 320 calories.

Here's another flavor that just wasn't destined to last very long. Like the title says, the Milk & Cookie Dough's ice cream actually tastes more like milk than vanilla, which pairs even better than expected with the ample cookie dough pieces (with chocolate chips) sprinkled throughout. I'd never think that anything packed with cookie dough chunks could be just 360 calories, but somehow Nightfood manages with this pint. 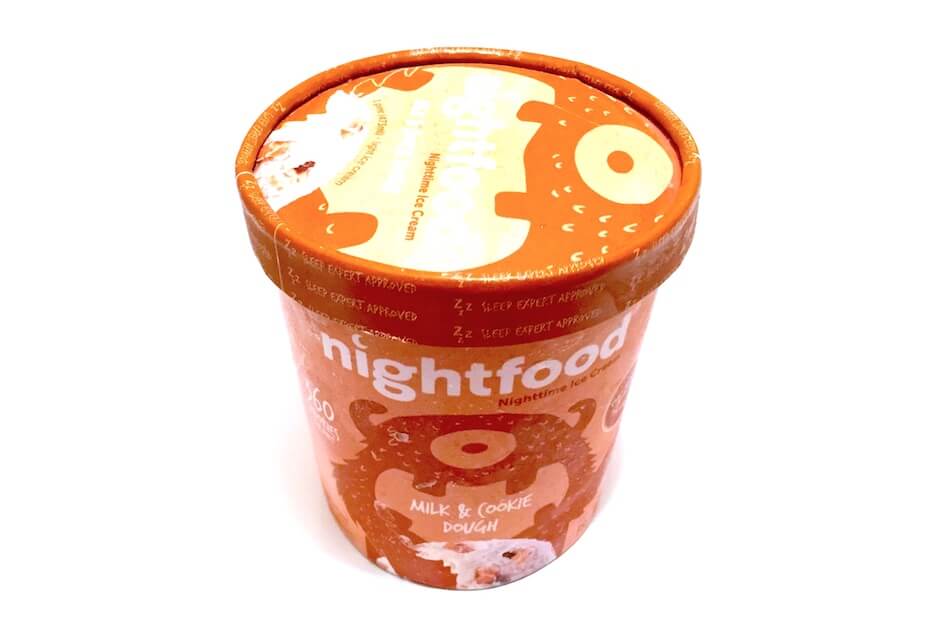 I found Bed and Breakfast to be the most mysterious of the Nightfood flavors. From the title alone, I guessed it might be flavored with cereal and milk, but when I opened the container and peeled off the lid, I was hit with a whiff of buttery scent. Only when I took my first bite did I understand that it was maple-syrup flavored ice cream, and as I dug in, I discovered pieces of tasty waffle. I found it unusual, but welcome and delicious. At 400 calories per pint, it won't be for everyone, but more adventurous eaters will love it. 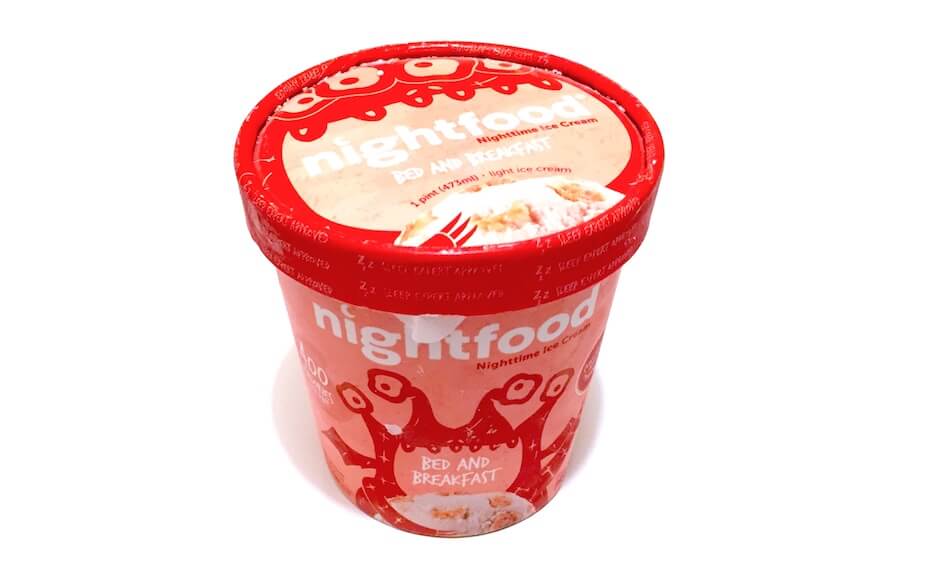 Last but definitely not least, the Cookies n' Dreams flavor was also all too easy to eat all at once. The vanilla ice cream was rich and creamy, and tinged with soft chocolate flavor because of the cookie bits, while the soft cookie pieces added just the right contrast in flavor and texture. If you typically enjoy cookies 'n' cream ice creams, this will quickly win your heart, even with just 360 calories per pint. 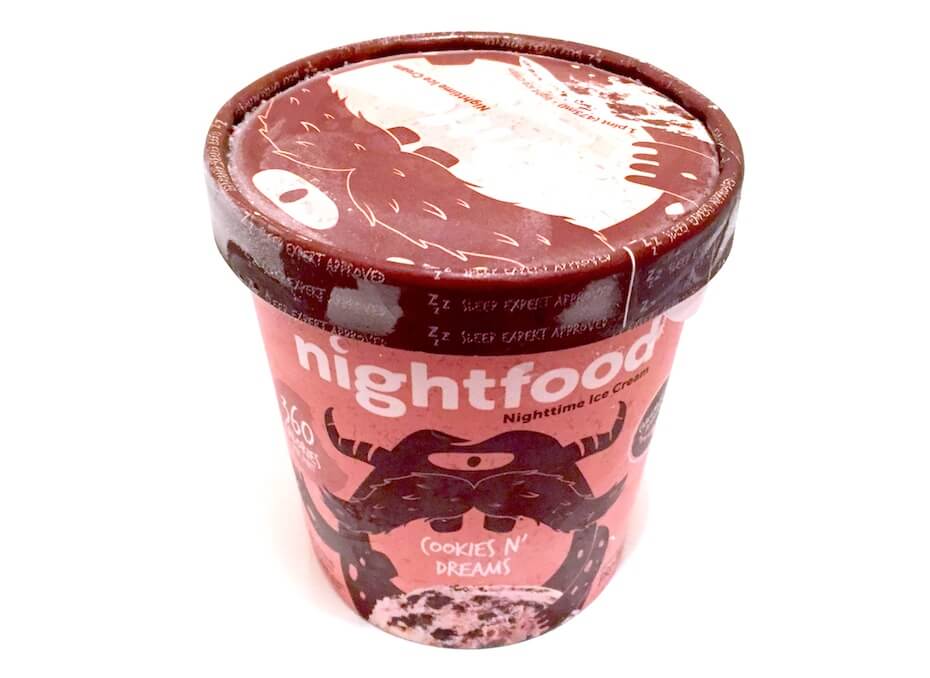 If you're lucky enough to live in an area where you can get Nightfood at the store, I highly recommend trying it at least once. At $5.99 per pint, the price is pretty typical for specialty ice cream, and the flavors are so good you won't even realize they're missing fat, sugar and calories.

It also helps that they're designed not to mess with your sleep. On nights I've eaten Nighfood, I've had no issues with heartburn or feeling like I ate way too much sugar, causing me to toss and turn. It's hard enough to get restful, restorative sleep during the start of Daylight Saving Time, so I was glad to have these around.

Unfortunately, if you're like me and don't live somewhere where Nightfood is sold nearby, high shipping costs can make ordering it online a bit prohibitive. If you're going to try it, I recommend going for broke and trying all eight flavors, since the shipping cost is only $6.95 if you order eight pints or more.

Find out if Nightfood is sold near you by checking out their store locator HERE.

Curious about sleep? Click HERE to found out about your chronotype, and what it reveals about you.