While granola has always been one of my go-to snacks, it also tends to be packed with ingredients that many health-conscious eaters often avoid.

I don't have any dietary restrictions myself, but I can see how most granola bars can be a big no-no for the gluten-free, vegan and sugar-avoidant crowds. That's precisely what intrigued me to Nutsóla. The company specializes in superfood mixes that suit a clean eating lifestyle and can be baked into tasty, homemade bars.

I was curious to try them, and the company graciously sent me bags of each of their five unique flavors, as well as a special mold and silicon baking may so I could craft my own DIY bars at home.

Nutsóla makes superfood mixes that can be sprinkled like granola, blended into shakes, rolled into energy balls, eaten straight out of the bag or baked into DIY Nutsóla bars. With each of their five flavors—Pumpkin Spice, Vanilla  Almond, Peanut Butter, Banana Nut and Cacao Almond—the recipes start simple, with dates, nuts, cinnamon, vanilla extract and sea salt. They're packed with wholesome, natural and easy-to-pronounce ingredients and lack weird preservatives and other unwanted additions. They're also vegan, dairy-free, soy-free, gluten-free, grain-free and non-GMO, including zero refined sugars. Each serving contains between 170 and 190 calories. They can be purchased on the Nutsóla website for $19.99 per one-pound bag, and their DIY kit containing the bar mold and baking mat retails for $24.99.

My first reaction upon opening my first bag of Nutsóla Superfood Mix was just how big the bags are. A pound of mix is a lot. Secondly, because of the association with granola bars, I was expecting the mixture to be somewhat hard and crispy, when instead it was mostly soft and crumbly. Though the consistency doesn't make it the easiest to eat by the handful, I found this to generally be my favorite way to enjoy Nutsóla.

When it came to flavor, I thought the mix perfectly captured the essence of autumnal pumpkin spice without veering into overly sweet PSL territory. The mix's only ingredients are dates, almonds, cashews, apples, pumpkin seeds, vanilla extract, cinnamon, ginger, nutmeg, allspice and sea salt, and together, they manage to evoke that pumpkin pie flavor, but with a hint of fruity sweetness rather than an all-out sugar rush. I'm not usually a huge fan of dates, but alongside the mix of nuts and seeds, and with the right complementary flavors, I found myself repeatedly coming back for more. 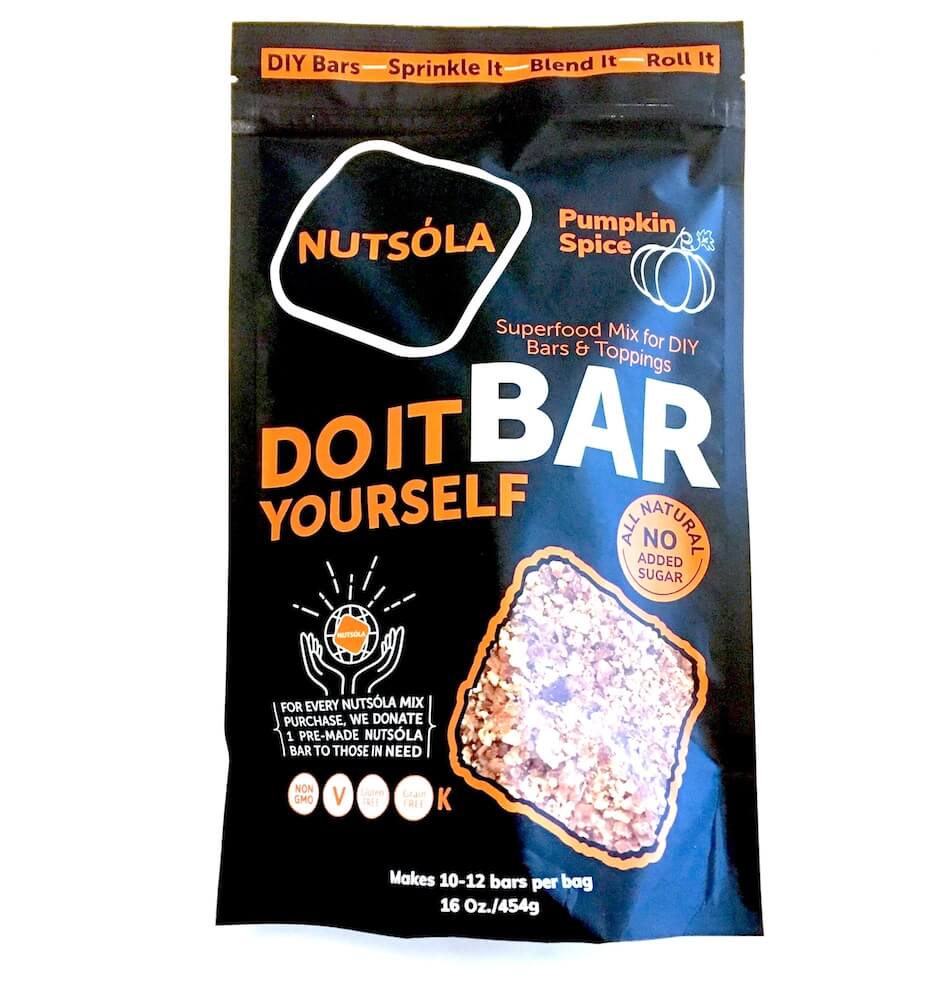 If you like to keep things really simple, I recommend Nutsóla's Vanilla Almond flavor. Including just almonds, dates, coconut, chia seeds, vanilla extract, cinnamon and sea salt, it's the flavor with the lowest ingredient count, allowing the flavor of each individual ingredient to come through. This wasn't one of my favorites, as I found the pure flavor of dates to be a bit much without many other tastes to balance it out, but I bet it'll find its fans regardless. 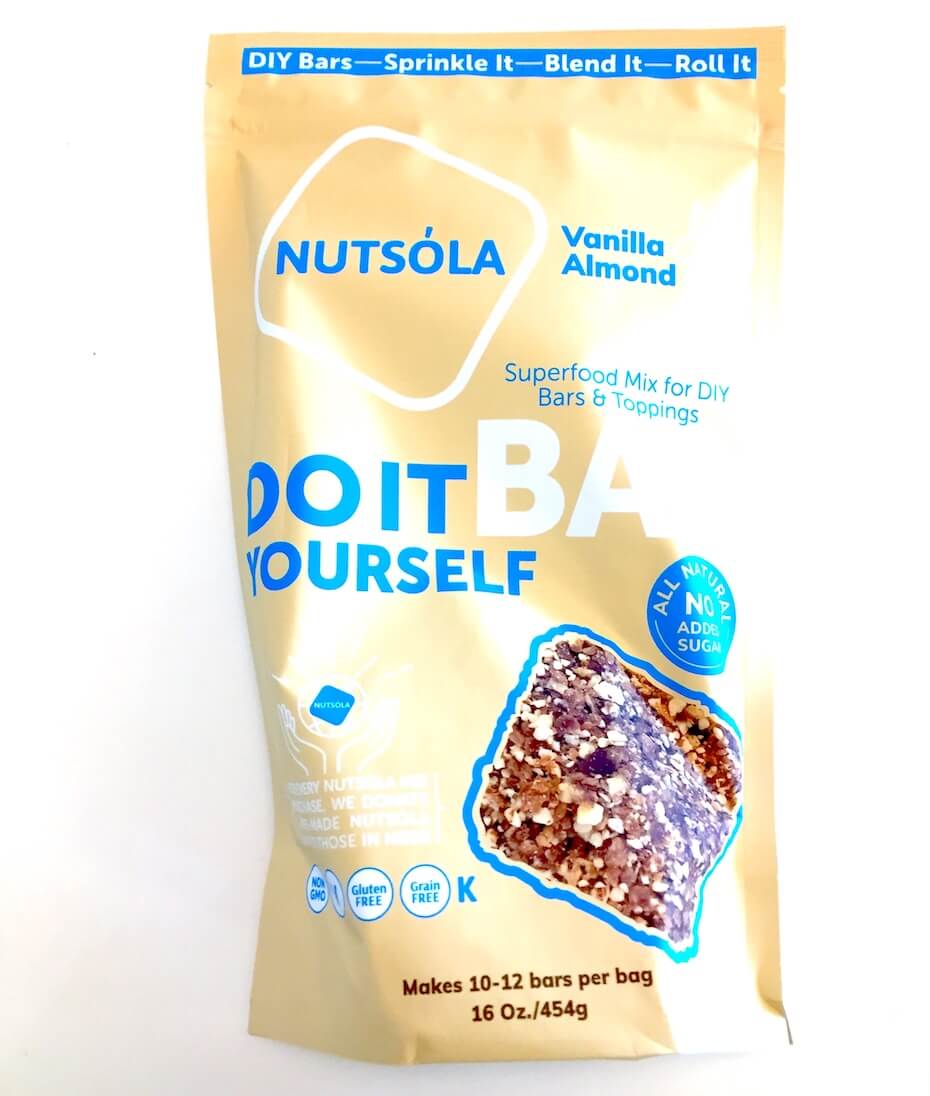 On the other hand, I found the Peanut Butter mix all too easy to enjoy. Because of the inclusion of peanuts as well as peanut butter—plus dates, coconut, chia seeds, vanilla extract, cinnamon and sea salt—every mouthful is packed with rich peanut flavor. The mix is nutty and delightfully salty, with every chunk of date turning the mixture into something akin to a peanut butter and jelly sandwich. If you don't like peanuts, stay far away, but if you love them, you'll have trouble resisting this blend. 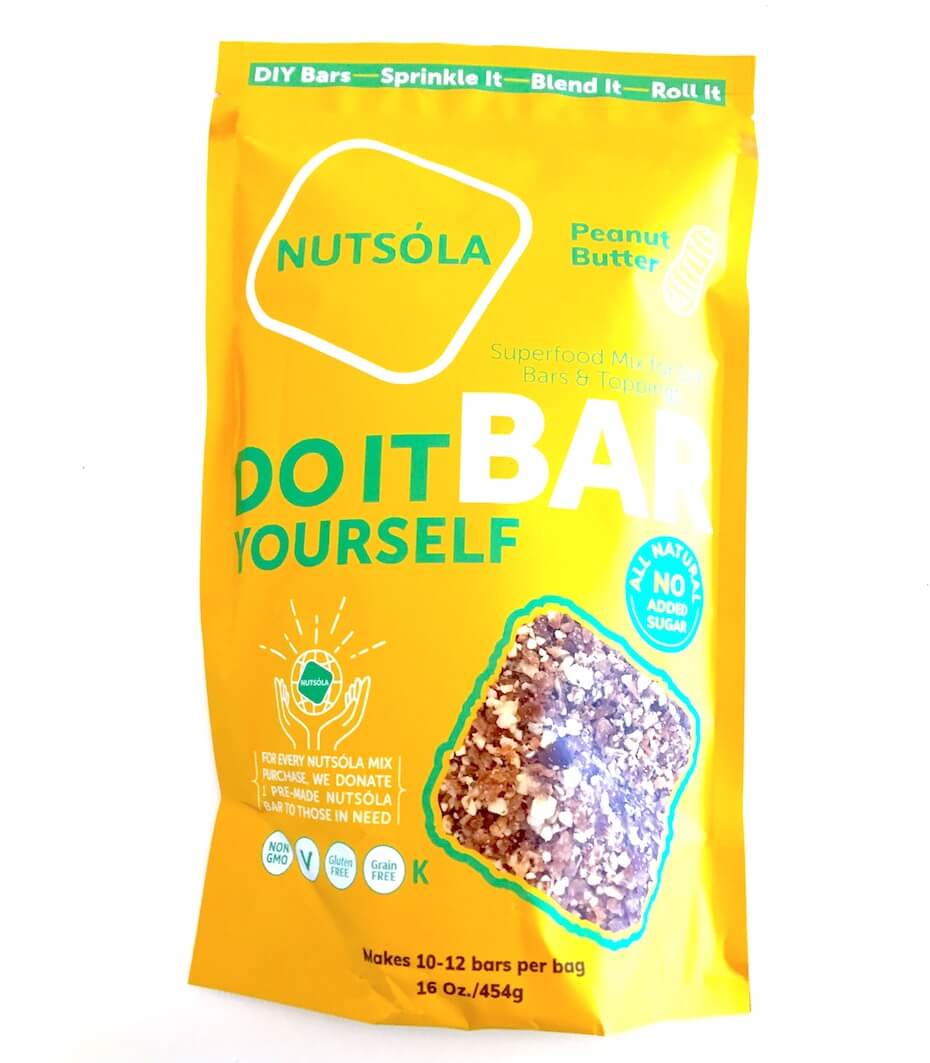 It's almost eerie how much this mix tastes like a cinnamon raisin banana nut bread. Its ingredients include almonds, dates, bananas, cashews, walnuts, chia seeds, vanilla extract, cinnamon and sea salt, and the result is a spiced, fruity blend that even has a similar texture to banana nut bread. If that's one of your favorite desserts, I think this will be one of your favorites as well. 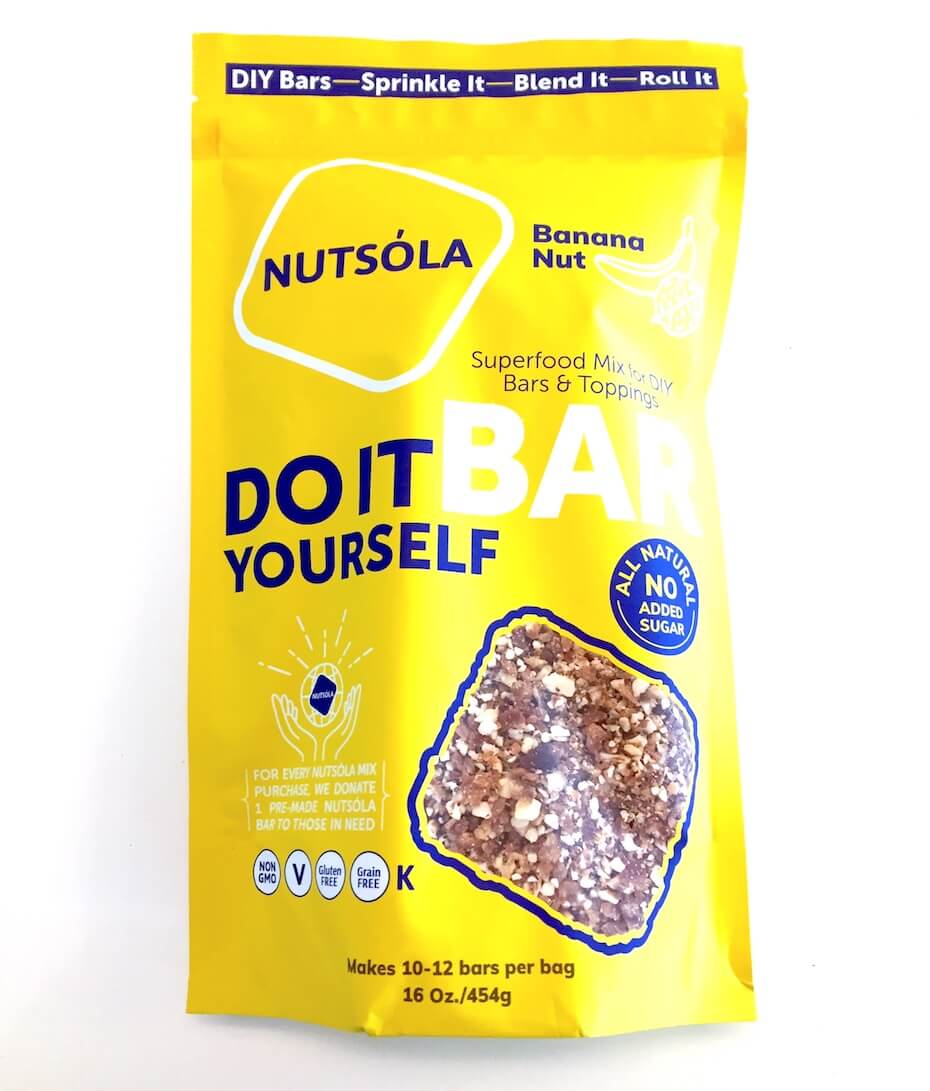 For the Cacao Almond mix, I decided to be daring and actually bake the mix into bars using the tools Nutsóla gave me. But first, I had to have a tiny taste. This flavor, achieved with almonds, dates, cacao powder, chia seeds, vanilla extract, cinnamon and sea salt, managed to make the dates taste like rich, slightly fruity, pieces of chocolate. Obviously, the real test would come when I got to taste-test the DIY bars. 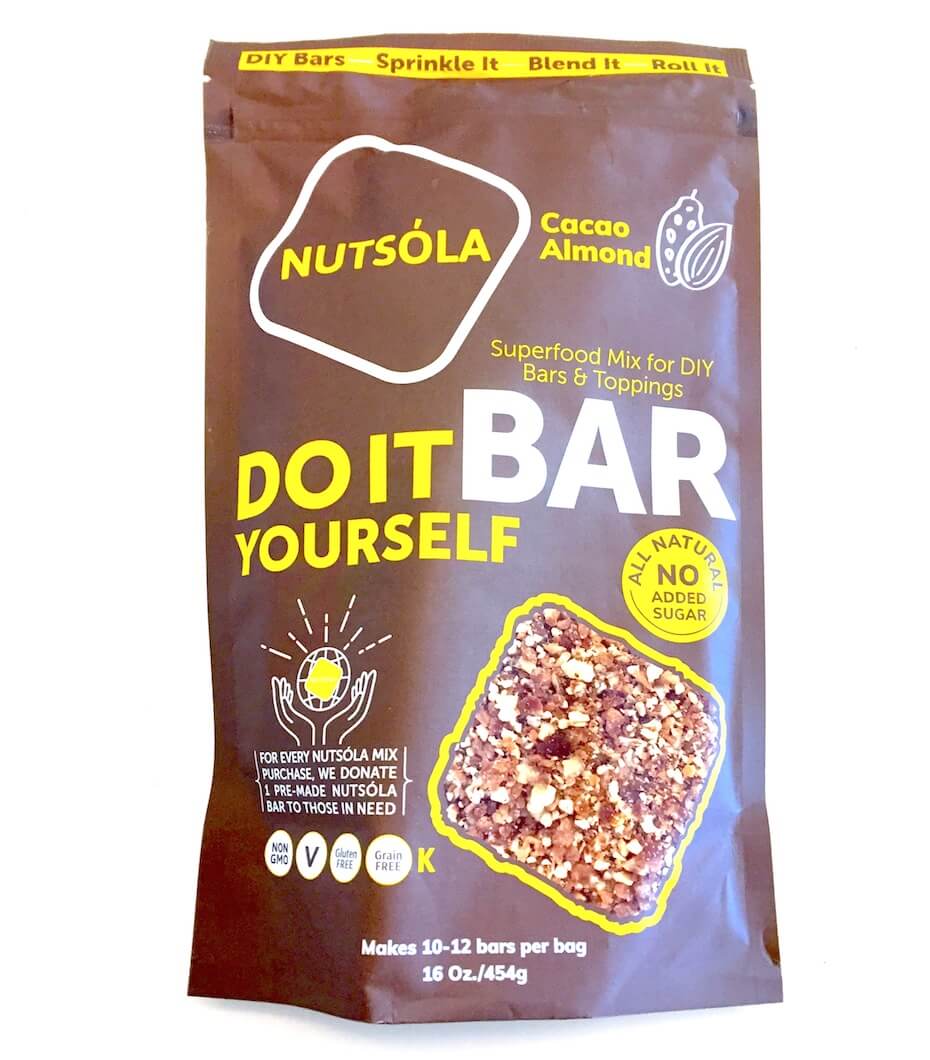 To make them, I started by pouring the entire bag into a bowl and adding two tablespoons of water to make the mixture slightly damp. I mixed well and then used the special bar mold to squeeze our a dozen identical bars.  I made a bit of a mess along the way, and it felt like quite a bit of work, but I was happy with the results. Obviously, it would have been a lot more work if I'd started from scratch and had to make the mix myself, rather than using some from a bag. 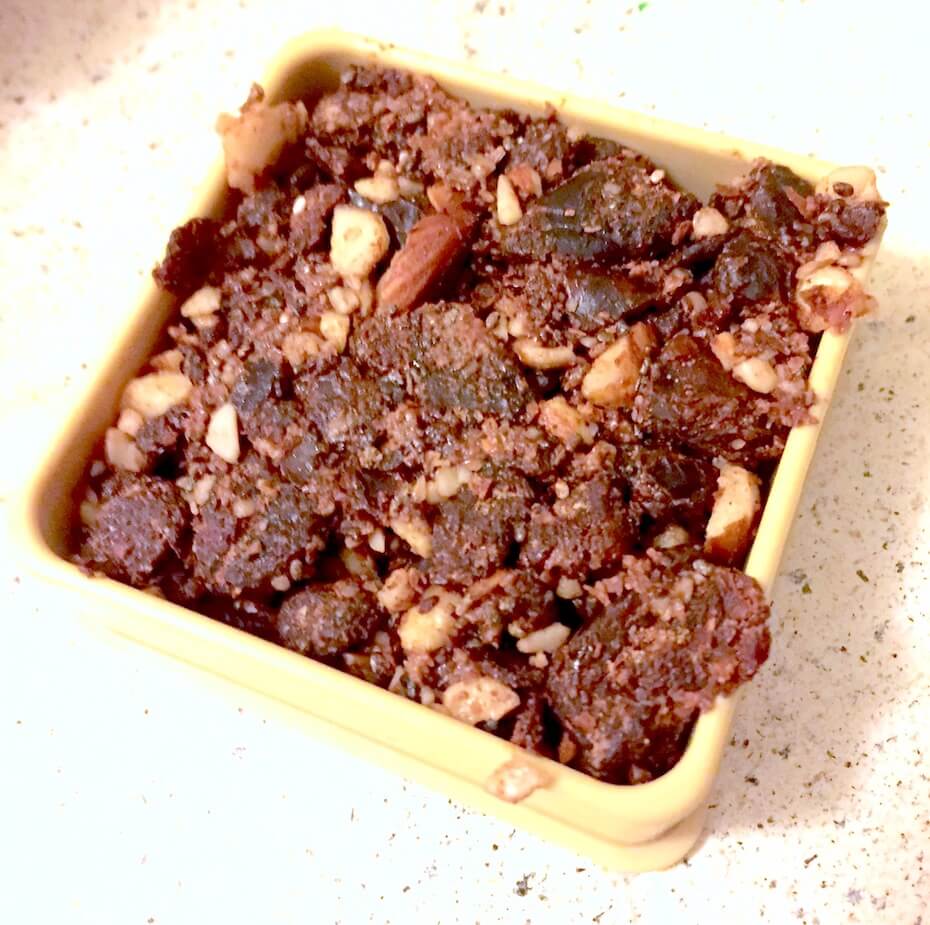 With the bars ready on the mat, the next step was to bake them. The instructions told me to place the bars at the lowest level of my oven for four hours at 170°, but unfortunately, my oven doesn't go below 300°. I did my best by keeping the door open about six inches, and that worked great for the first two hours, but sometime between when I turned the sheet around in the oven after the halfway point and when the bars were fully finished, the oven door closed itself. I think the bars wound up more crisp than they should have, but at that point, there wasn't much that I could do 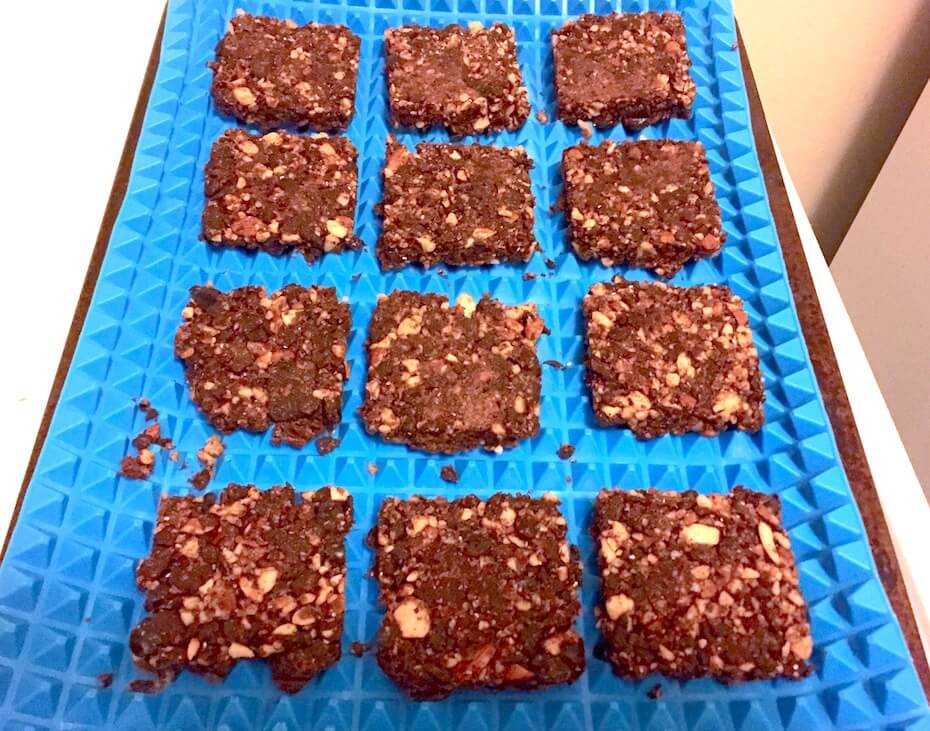 The resulting bars were quite crunchy, but managed to be even more delicious than the raw mix had been. The baking process had brought out a roasted, warm flavor in the almonds, and the chocolate flavor seemed even more consistent throughout the bars. Unfortunately, even though I put the rest of the bars in a plastic container, the leftovers got pretty tough and stale after a couple of days. While they still tasted alright, they were a little too hard to eat. Next time, I know to not leave them sitting around! 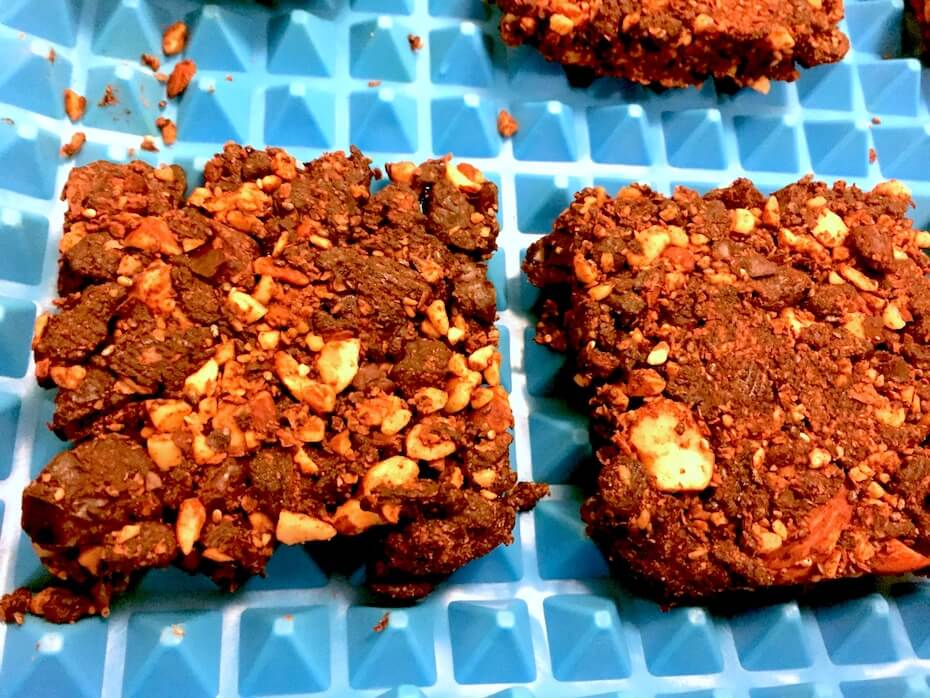 Overall, I loved my experience with these Nutsóla mixes. Each one tastes deliciously healthy, without tasting boring, and I thought they were even better in baked bar form. Of course, I think $19.99 is quite pricey for a bag of any tasty treat, and I think the DIY process maybe has too many steps and too much room for error, especially for more casual health fans. But if making your own "granola" bars at home sounds right up your alley, I think you're going to enjoy Nutsóla.

If you thought these sounded interesting, click HERE to find out what we thought of sleep-inducing granola bars, Snooze Snacks.