If You're Looking for an Inexpensive Drawing Monitor, Parblo May Be Your Perfect Match 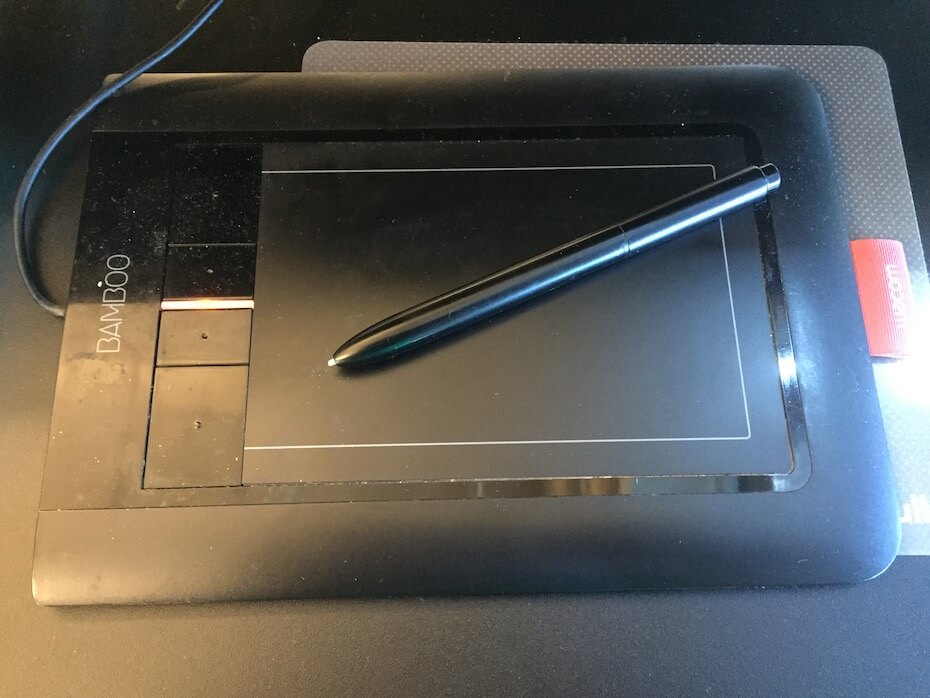 While I'm not much of an artist, I do like to doodle from time to time, and I found that the tablet gave me a lot more control than my Mac computer's trackpad or a mouse ever could, even if it never felt like an exact one-to-one translation of what I was drawing. I even stopped using a mouse entirely, preferring the more precise feel of moving a pen around the screen.

That satisfied me for a long time, and even when I got frustrated that some of my drawings wouldn't come out exactly like I'd wanted, I didn't think much of it. A $100 investment I made almost a decade ago was still paying off, and I didn't see the point in spending a lot of money on a new tool that might give me basically the same results.

But when I got obsessed with the Drawfee channel on YouTube, that all changed. It showcases incredible artists taking silly suggestions from fans and transforming their ideas into great drawings in real time on screen as they banter and discuss the choices they make with every stroke of their digital pen.

Seeing the ease of their drawing made me realize that I was missing part of the equation, and a little deeper digging led me to discover that they weren't just using tablets like I was, but full-on drawing monitors, applying their digital pens directly to a screen to realize their visions. It wasn't long before I was online researching drawing monitor options. I reached out to one particularly inexpensive brand, Parblo, who very generously furnished me with one of their Coast16 drawing monitors so I could finally find out what I was missing.

The Parblo Coast16 is a drawing monitor with a sizeable 15.6-inch widescreen that's built to be user-friendly and intuitive. The monitor has a couple of small kickstands built in, creating an ideal 30-degree angle for drawing, and features eight customizable buttons that can be assigned to different keyboard functions and a dial ring for zooming. 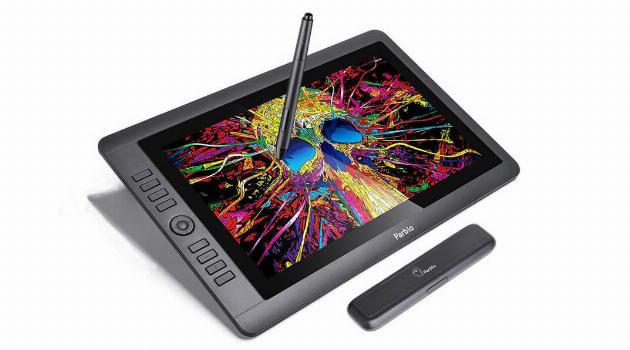 It also comes with its own digital pen (complete with carrying case), a special connecting cable with to connect to your computer via USB and HDMI and a drawing glove. It costs $429 on Parblo's website, which may sound expensive until you consider that similarly sized drawing monitors from more well-known brands start at $650 and only go up from there. Of course, I had to try it out for myself to see if that 33% discount would be worth it.

When I took my Parblo tablet out of its box, I was immediately struck with its size. The screen itself was impressive, but the tablet was even bigger, measuring at more than 17 inches wide and 11 inches tall. The monitor was made of plastic, but it didn't feel cheap, giving me the impression that it would survive a bit of wear and tear.

In fact, it was so big that it didn't really suit my workspace. I use a standing desk, and it's not exactly suited to accommodating a hulking monitor at the arm level. Thankfully, I have a totally open desk right next to mine with plenty of space for both my computer and the monitor side-by-side. 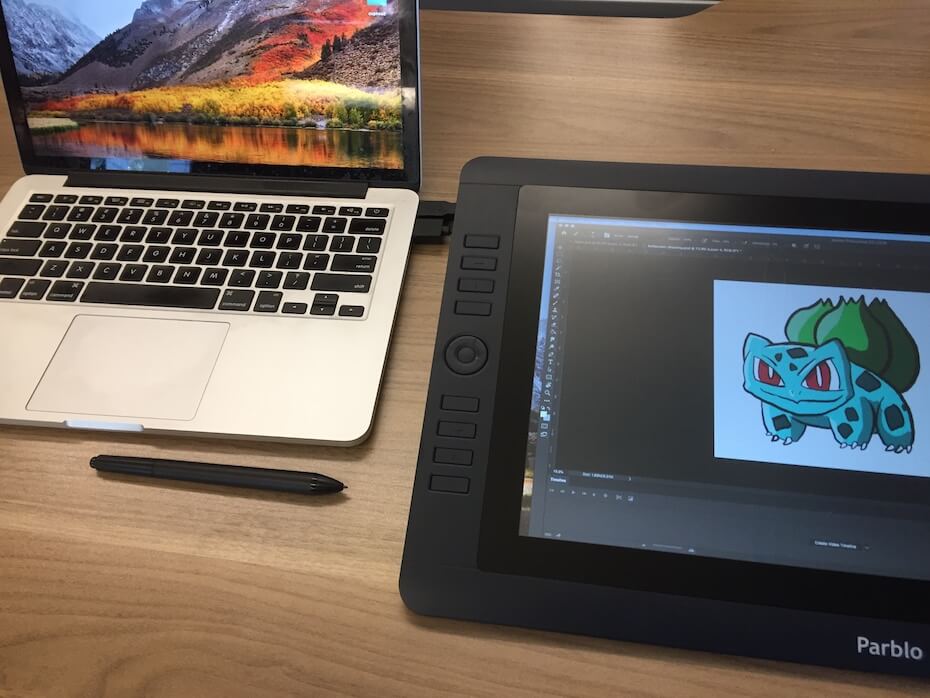 But before I could plug it in and get going, I had to set up my computer for it first. A download disc was included in the box, but since my computer doesn't have a disk drive, I simply headed to Google and typed in "Parblo Coast16 driver" to find and download exactly what I needed.

Funny enough, the most complex step of the entire setup was probably figuring out how to plug the thing in. One end of the cable had two plugs to plug into the right side of the tablet, while the other end of the cable branched off into two separate USB plugins and one for HDMI to plug into the computer. After trying a few different configurations, I finally got the right combination of HDMI and USB plugged in to get my monitor on and ready to draw with.

While I did find it a little bit strange that the plugins are on the right side of the monitor, forcing me to loop the long cables behind in order to plug them in, I realized they might also be awkward on the left, since they plug directly into the right side of the computer. Either way, I found that this setup requires quite a bit of desk space to accommodate both my laptop and the tablet side-to-side, which would be necessary for accessing all of the keyboard shortcuts I utilize when I draw. It's also possible to sync a wireless keyboard instead, but since mine is just as wide as my computer, this doesn't actually save me any space. 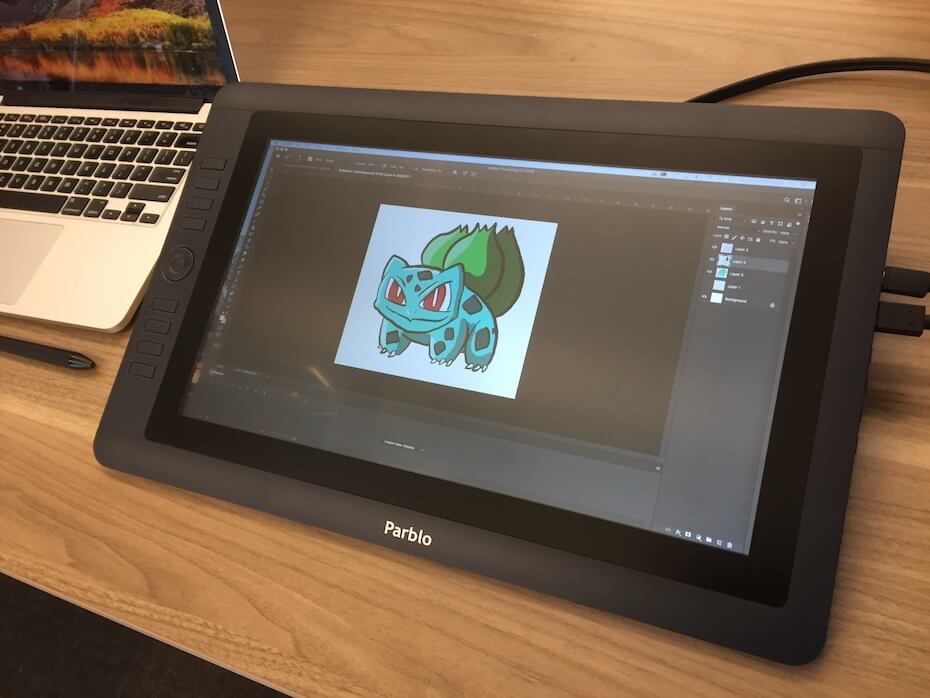 But the real test came with actually testing out its drawing capabilities. For my first doodle, I wasn't quite sure what to draw. I decided to go for something simple, and eventually landed on doodling one of my all-time favorite Pokémon, Bulbasaur.

After a quick calibration, I opened up a Photoshop document and put the pen to the monitor for the first time, and I was really pleasantly surprised with the smoothness and responsiveness of the lines I was drawing. First, I used a light purple line to sketch out the Pokémon's basic shape. It took a minute at most, when in the past I'd fret with my tablet and redraw the lines again and again until I was completely happy with them. 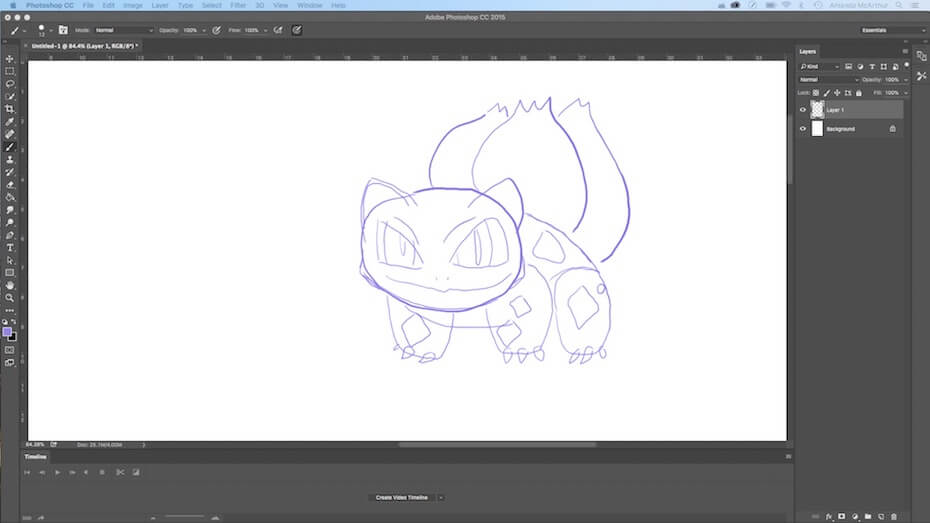 Next, I created a new layer for the inking. It was here that I really saw how the monitor responded to different pen pressures. Maybe it's because my other tablet is so old, but pressing the pen lightly or softly barely makes any difference in the thickness of the lines I draw. This time, the lines were thick and heavy when I pressed harder, and thinner where I used a lighter touch. I feel like having varied pen strokes in a drawing can make it look really professional, so I was really happy with the results. 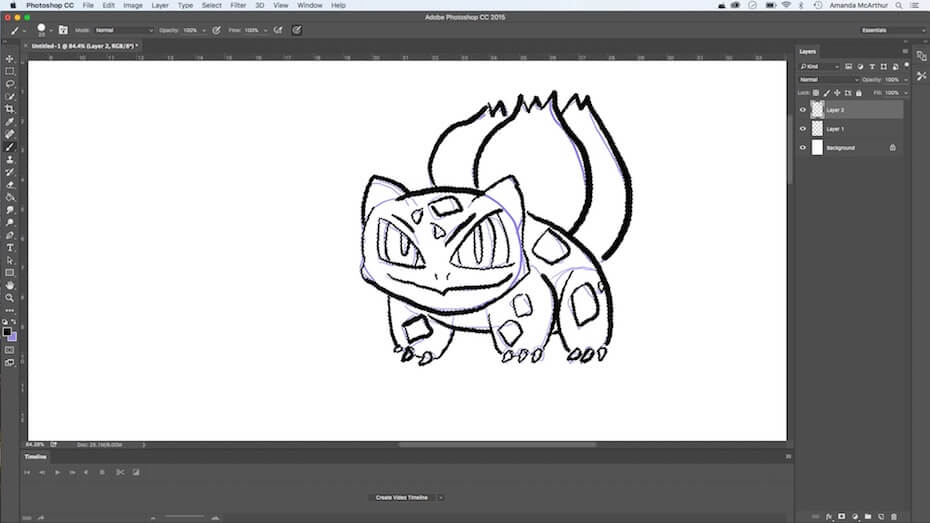 After that, I removed the sketch layer and cleaned up my lines a little more with the eraser pen. Not only did my drawing look pretty cute, but it took only a few minutes to get to this step, rather than 10 or 20. 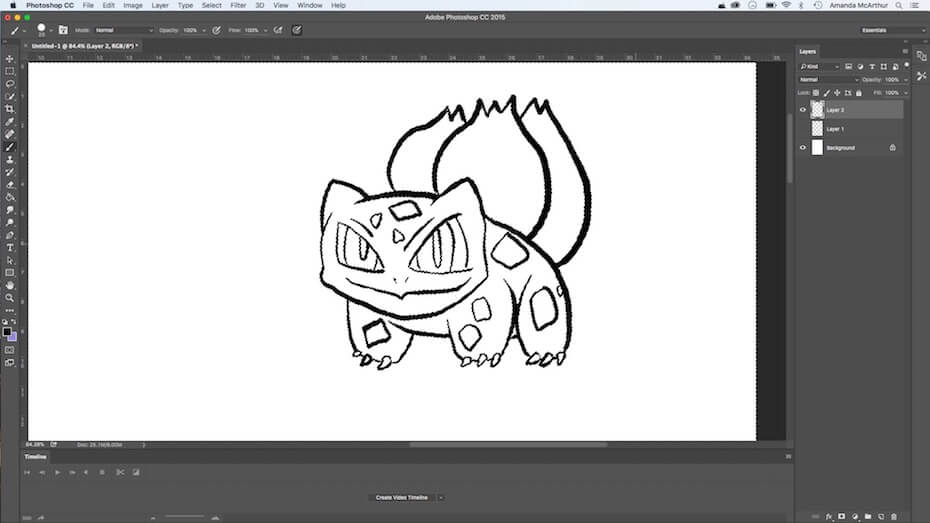 The drawing monitor also made it really easy to add color to my image in just moments. I was able to precisely control the pen in ways I hadn't before, significantly reducing the time it took. 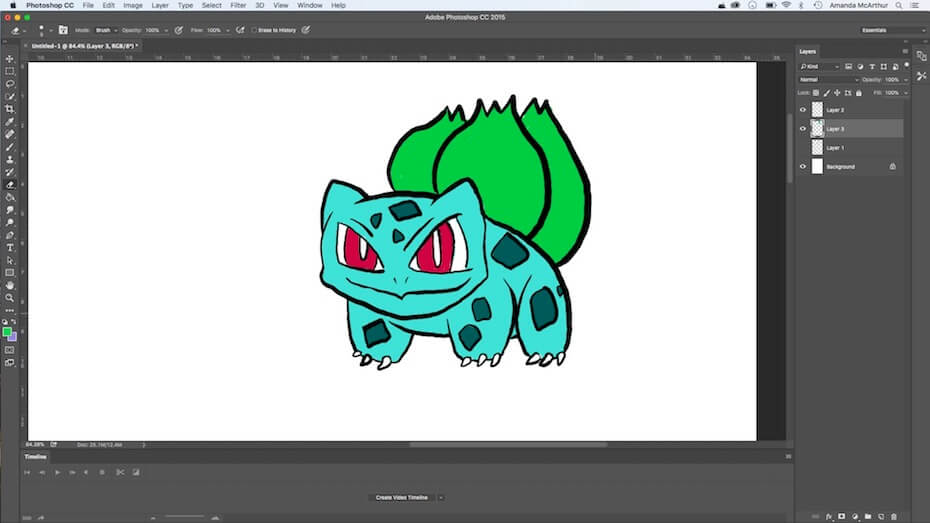 Lastly, I added some shading to make the image pop even more. While the final result was far from the fanciest thing I'd ever conjured up in Photoshop, it took me maybe 10 minutes tops. Having more control than ever also equated to less time wasted on my drawing, which was a really good thing, and the colors looked fantastic on the monitor, with buttons on the side to adjust the color, contrast and brightness of the graphics as I pleased. 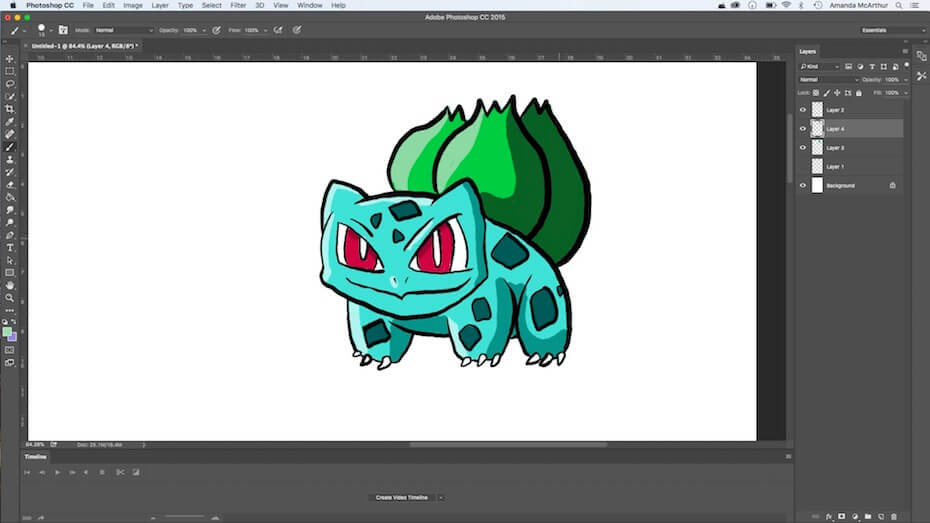 Since then, I've really enjoyed playing with the monitor, even if that has just meant testing out brushes and messing around with different colors and settings. There's so much potential I've yet to unlock, and I can't wait to keep getting amazing results out of it. 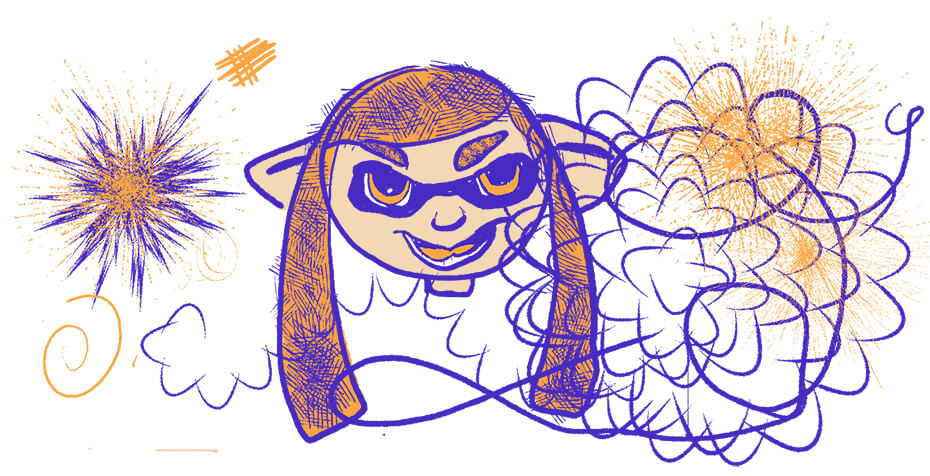 And while I didn't quite understand the point of the included drawing glove at first, using it quickly showed me the error of my thinking.  Not only did the glove allow my hand to smoothly move across the monitor without the friction of my skin rubbing against the screen, but it also cleaned the screen while also protecting it from the oils of my hand. 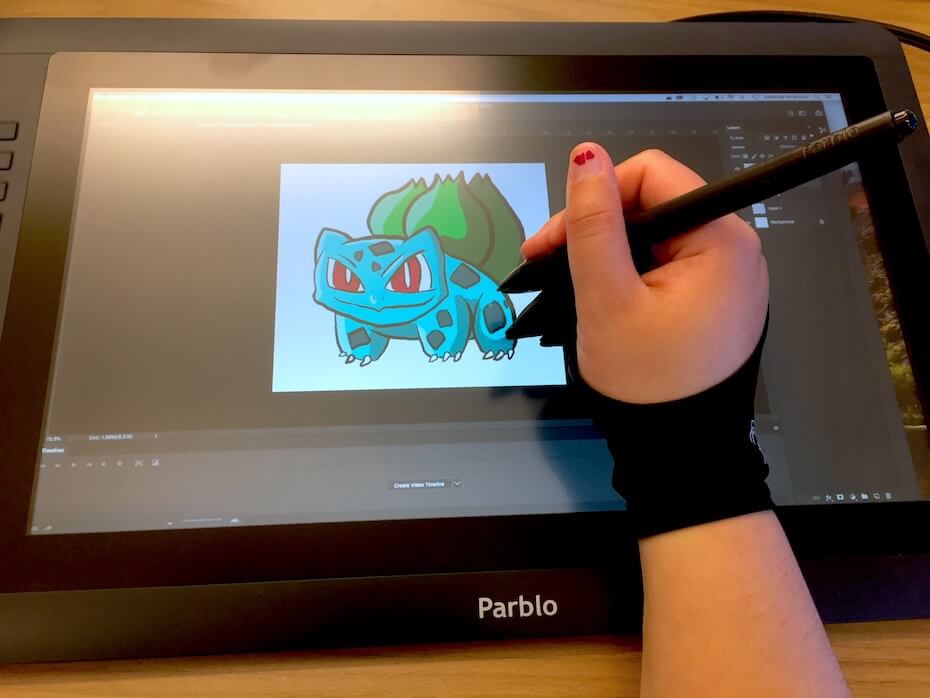 But there are ways that I think this tablet could be made even better. for example, the eight buttons to the left of the monitor's screen are handy, but they can only be mapped to a handful of keys and commands, and I wish that customization went a little further. In Photoshop, for example, you can quickly swap to the brush tool by pressing the B key, to the eraser tool by pushing E, or to the marquee tool for selection by pressing M. I'm using these keys constantly to swap back and forth between tools when I'm drawing, and it would be amazing to be able to assign those functions directly on the tablet itself without relying on a keyboard. It would mean I wouldn't need as much space on my desk to utilize it fully.

But after more than a month of use, the monitor still looks amazing, with the screen looking just as crisp as ever and none of the pixels going dead. It's a great piece of equipment, and if you think a drawing monitor is a must-have to take your digital art to the next level, I think Parblo's tools are a great place to start.

While I haven't had a chance to test out more expensive drawing monitors, Parblo's Coast16 is almost everything I could have wanted. The pen is responsive with just the right amount of sensitivity and has a gorgeous monitor that displays color well, and once I figured it out, setting it up is as easy as plugging a couple of cords into my laptop. While it would be nice to be able to map my own custom buttons to the keys built into the monitor, I'm getting by fine without that feature.

Of course, this monitor won't be for everyone. Some people simply can't drop $400 or more on a piece of fancy drawing equipment. In those cases, I think more inexpensive drawing tablets are a nice stepping stone to more accurate drawings. The Coast16 is also big, so if you'd love to draw on something similar but just don't have the space, one of their smaller monitors might be a better fit and work better with your budget.

Even though there might be better tablets out there, Parblo's monitors are a great fit for me, and I can't wait to create even more art with it in the future.

Use coupon code SWEETYHIGH10 at checkout for 10% of your order at Parblo.com.

Not sure what to draw next? Click HERE to learn more about the How to Draw Cool Stuff series.