Last week, we shared an interview with Ryan Potter on his upcoming film, Big Hero 6. Today, Ryan dishes on his personal experience with acting and his Big Hero 6 character, Hiro Hamada! 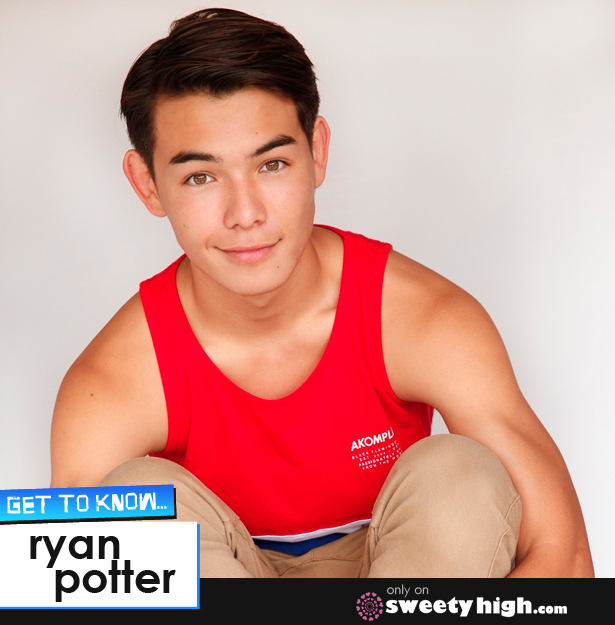 Ryan Potter didn't always think of himself as an actor. Through his work studying martial arts, particularly White Tiger Kung Fu, he basically fell into acting.

One day, Ryan noticed a flier for a TV show audition at his dojo. They were seeking 13 to 14-year-old Asian Americans with a background in martial arts.

"I ended up just going to the audition, one thing led to another, and I got my first role on Supah Ninjas,"  Ryan said.

On the Nickelodeon show Supah Ninjas, Ryan played the role of Mike Fukanaga, a teen who discovers he comes from a long line of vigilante ninjas. Mike's deceased grandfather, who mentors him via a hologram, was played by Star Trek veteran George Takei.

"It was kind of history from there," he said. "Acting was a lot of fun so I continued to do it."

"Hiro is your average smart aleck teenager," Ryan said. "This kid is a genius who knows everything."

He's also got an overprotective brother, named Tadashi, who tries to keep Hiro out of trouble.

"Hiro has a really big heart and he cares," Ryan went on. "When he sets his mind to something, he gets it done. He gets phenomenal results, but first he has to set his mind on something. If he doesn't want to do it, he's not gonna do it."

That's where Tadashi comes in to lend some guidance. Once Hiro agrees to do something, it's his entire focus and he'll stop at nothing to get it done.

"I think Hiro and I have the same single-track mind when it comes to getting something done," he said. "Whether there's homework or a school project or an audition, we get very focused on that single thing and we make sure we get whatever it is completed to the letter."

But Ryan and his character, Hiro, aren't exactly alike. At 19, Ryan is five years older than his onscreen counterpart. Ryan said that Hiro is also much more of a troublemaker.

"I think Hiro is definitely better looking," Ryan joked. "Other than that, I think we're pretty similar in that we eat a lot and we think we know everything."

Ryan was born in Oregon, but raised in Japan before his family returned to the United States. Big Hero 6 takes place in the fictional city of San Fransokyo, which blends elements of the Japanese capital, Tokyo, with San Francisco, California. Ryan loved seeing both cities come together in the film.

"I spent the first seven years of my life in Tokyo, but my family lives up north, so we went to San Francisco a couple times a year, and we still do," Ryan explained. "Being in both cities quite a lot, I just see the perfect blend. You have the Golden Gate Bride, but then you have the orange shrine gates that are all over Japan. The way they combine the two of them is just so flawless."

Ryan said that San Fransokyo not only looks the part, but also feels exactly right in its culture.

"Tokyo is such a vibrant, technological city and San Francisco is always building new stuff," he said. "San Francisco has a very cultural feel to it. The entire city feels like a home. San Fransokyo is able to blend that lived-in feel with all the new technology and buildings and lights. It's phenomenal the way they were able to blend the two together."

Hiro Hamada also has a sidekick, an inflatable robot named Baymax. Though he was built as a hospital care robot, Hiro's tinkering turns him into a worthy hero.

Ryan said that if he could build his own robotic sidekick, its skills would definitely include cooking.

"Without second guessing a thing, it would be a chef," he said. "Maybe I'd want it to fly or maybe I'd want it to transform into a bed or a car. But I'm pretty sure–no, I'm positive–all I would want it to do is make amazing food so I'd just have a personal chef all the time."

Hear Ryan as Hiro Hamada in Big Hero 6 when it hits theaters on November 7! Join us at Sweety High if you can't wait for the film!

You can follow Ryan on Twitter and Facebook! Also be sure to check out the first interview with Ryan here, and stay tuned for even more from Ryan Potter!