With her moody vocals and poignant lyrics, Sarah isn't afraid to express her heart through her songs. And her newest track, "Rough Draft," is no exception.

Keep scrolling to listen to the exclusive premiere of the song below, and get to know this rising star a little better. 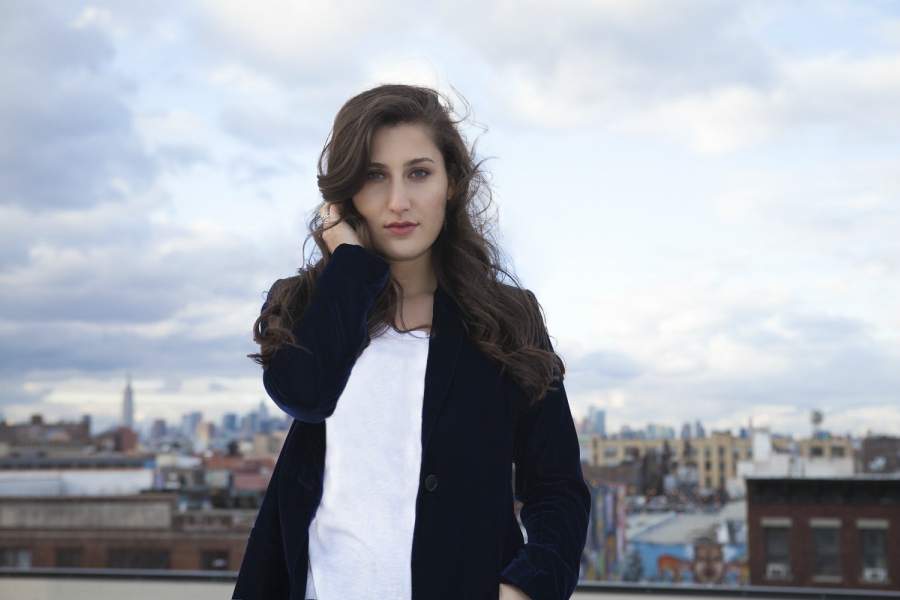 What it means to Sarah: "I wrote 'Rough Draft' four years ago, and over the years it's meant many different things to me. When I wrote it, I was thinking of it as a love song, one in which I'm daring a guy to give me a chance even though I'm still figuring out myself and who I want to be. But as I've grown up with the song, I've started thinking of it as less of a me-to-guy song and more of a me-to-me song about my relationship with myself. I sing it when I'm in a funk and need a reminder to not doubt myself and not overthink things, and to just put myself out there and see what happens. I think I'll always kind of feel like a rough draft of who I aspire to be, but that's okay, because that goes hand in hand with having goals and dreams that you're working toward."

Biggest influences: "I have tons of music influences, from the bands my parents listened to while I was growing up, to the '90s pop artists I loved so much, to the artists I discover on Spotify these days, and everyone in between—so I have a hard time answering this question from a purely musical perspective. But, in life, my biggest influence is my mom, by a longshot. She's my best friend and support system—really don't know what I would do without her. Plus, she's exposed me to so much amazing music, and she's always been the most supportive person in my life when it comes to my career. Lots of parents would be freaked out if their kid told them they wanted to be a singer-songwriter, but my mom is so excited by it. I'm a lucky daughter!"

Dream venue: "Madison Square Garden, easily. I grew up in New York City, so anytime any of my idols came through New York on tour, that's where they'd play. My first concert was Madonna at MSG when I was 7 years old, and since then I saw basically everyone I looked up to play there—Taylor Swift, Lady Gaga, The Rolling Stones, The White Stripes. Playing the Garden is the No. 1 item on my bucket list, and also probably No. 2 and No. 3."

Dream duet: "If I had to pick one, though, it would probably be Ed Sheeran. I've been to five of his concerts already—I love his music, and I also think he seems like the coolest, most down-to-earth person. I'd be stoked to work with him because I think we'd get along well and would have similar artistic sensibilities, so we'd make something we'd both be stoked about and probably (hopefully) become best friends in the process."

Fave songs: "Love Me Now" by John Legend, "Shape of You" by Ed Sheeran, "Human" by Rag'n'Bone Man, "Jungle" by X Ambassadors and "Words" by Daya.

Dream accomplishment: "I write a lot about relationships—with guys, with friends, with myself, with my music. It's how I work through stuff I've been through or am going through. When I put those songs out into the world, the only thing I really hope for is that other people who've been through similar things will hear my songs, identify with some of the stuff I'm talking about, and feel a little less alone or a little bit validated by knowing that someone else has been through the same stuff. Music, especially pop music, is supposed to bring people together and make people feel good. That's exactly what I want my music to do. Anything else would just be icing on the cake."