Sean Ryan Fox is a young actor who plays Jasper Dunlap on Nickelodeon's new series, Henry Danger! Sean spoke with us all about his latest role and more in a recent interview! 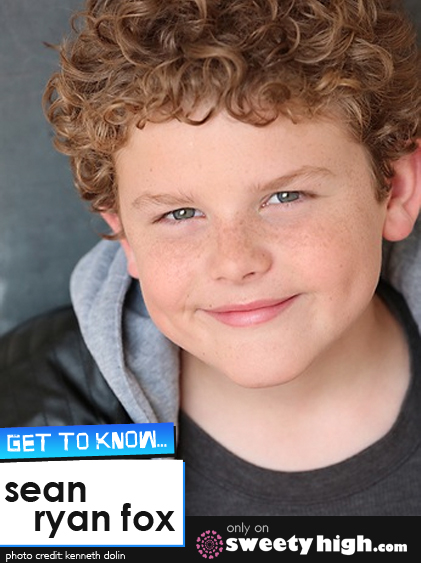 Sean's career as an actor began almost by accident. He used to tag along with his mother when his older sister would go on auditions.

"One day my mom asked me if I wanted to do auditions too, so I said 'YES,'" Sean explained.

When he first started acting, Sean played a lot baseball, and saw it as a potential career. But when he started nabbing big guest roles, he realized that what he really wanted to be was an actor. A couple of his biggest inspirations are Robert Downey, Jr. and Johnny Depp.

Sean auditioned for Nickelodeon's Henry Danger because he was delighted by the prospect of working with Dan Schneider, creator of Sam & Cat, Victorious, iCarly, Drake & Josh and more! Sean didn't even get to see a script until after he got the part as Jasper!

"It was working with Dan Schneider, which was one of my dreams," Sean said. "I was so excited I could barely wait the month it was until we shot the pilot."

Sean said that his character, Jasper, is funny and fun-loving like him, but Sean is cleverer, and less gullible, than his onscreen counterpart.

While there are a few shows on TV about superheroes, Sean said that Henry Danger stands out.

"This is really more about a boy who has a special job to work with a superhero and how he balances his family, friends and school along with trying to help Captain Man," he said. "Most superhero shows are about just catching bad guys and such and not about the sidekick."

Sean also had a few words of advice for his fans, superhero or not:

"Follow your dreams, be yourself and just have fun at no matter what you do," he said.

Love Sean Ryan Fox on Henry Danger? Also be sure to check out our interview with star Ella Anderson, and our Henry Danger set visit! You can also join us at Sweety High to share your favorite Henry Danger news and much more!