It's been an amazing week of reunions for former Shake It Up costars Bella Thorne and Zendaya, plus all of us fans who miss seeing the two together! 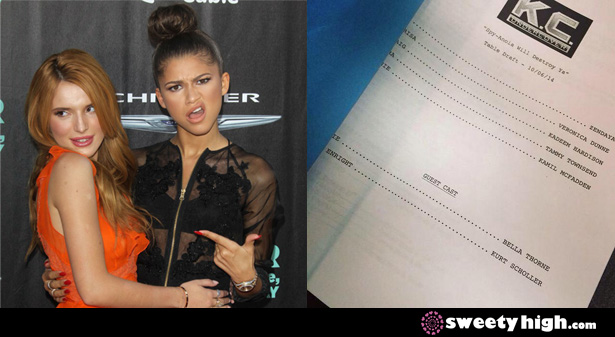 Earlier this week, the duo reunited on the red carpet for Bella Thorne's latest movie release, Alexander and the Terrible, Horrible, No Good Very Bad Day. Zendaya and Bella posed for some fun and funky photos together!

The same day, writer Rob Lotterstein Tweeted a photo of a script for an episode of the Disney Channel's upcoming series K.C. Undercover, starring Zendaya! The cast page reveals that Bella Thorne will be guest starring in an episode tentatively titled "Spy-Anoia Will Destroy Ya" as a character whose name ends in an "ie"!

Part of the filming of the episode actually took place on Bella Thorne's birthday yesterday, October 8, where the cast and crew threw her a party, complete with chocolate cake! It's fabulous to see that she was in good company for her special day!

Love Bella Thorne and Zendaya? Join their fan clubs on Sweety High! Also click here to se what Zendaya asked for on her 18th birthday, and check out our interviews with the cast of Bella Thorne and the rest of the Alexander cast!