When it comes to Halloween candy, I appreciate a nice variety in my treats.

It just doesn't do it when I have all chocolates or all sweet and fruity candies—it's even better when I get to mix it up with mouth-puckeringly sour candies. That's why I'm always obsessed with new Halloween releases from Sour Punch. When the brand offered to send me this year's treats to try and review, I happily accepted—and they also included some other delicious goodies for me to try, which definitely deserve a mention.

There's something absolutely classic about Sour Punch Twists, and their Halloween assortment is especially spooky and delicious. Coming in green Monster Melon, purple Bone-Chilling Berry and Oozing Orange, they're essentially hollow licorice twists coated in delicious sour sugar crystals, with the perfect combination of Halloween colors and flavors. I especially love that they remain tart all the way through. If there's one issue, it's that they're dangerously good, and it's impossible to eat just one—or even just two or three. 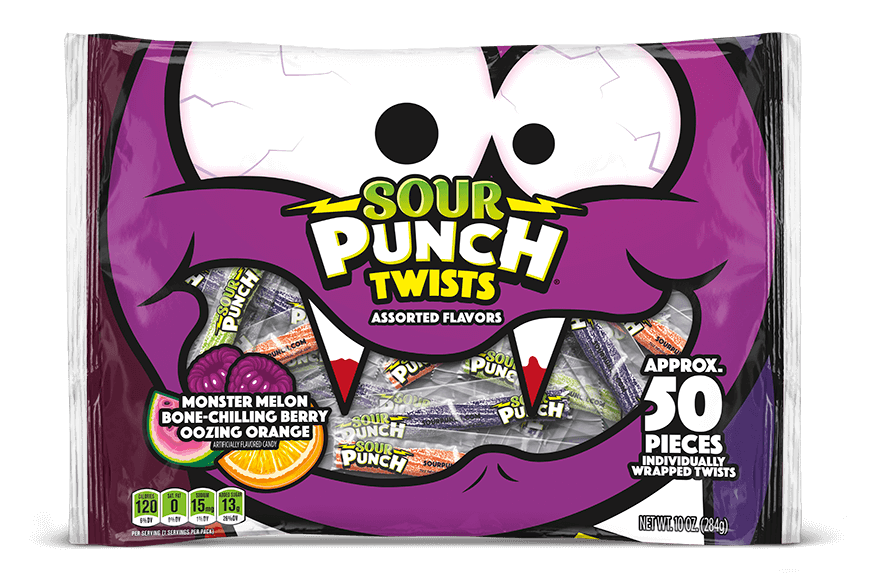 Because the Sour Punch Spooky Straws have a similar color palette to the Halloween Sour Punch Twists, I expected them to be the same flavors, but that actually isn't the case at all. With green Apple, purple Grape and orange Tangerine flavors, these thinner, denser straws offer up something a little different, while being just as deliciously sour. 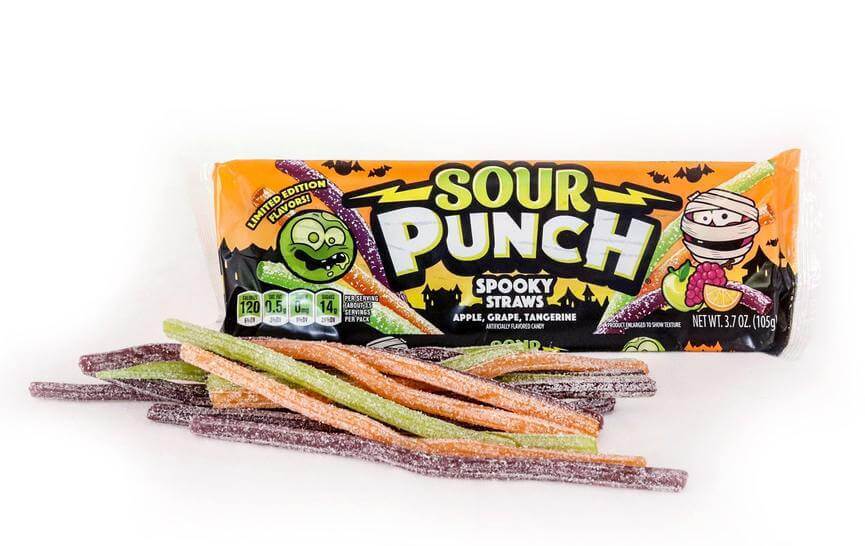 Of course, Sour Punch doesn't only make their treats in straw and twist shapes. This year, they've also got their bags of Bats and Pumpkins. These bite-sized pieces come in fun flying bat and jack-o-lantern shapes, featuring the same Bone-Chilling Berry and Oozing Orange flavors with tasty sour crystals, but with a slightly thicker, chewier texture (and slightly less sourness) that you just might prefer over the classics. 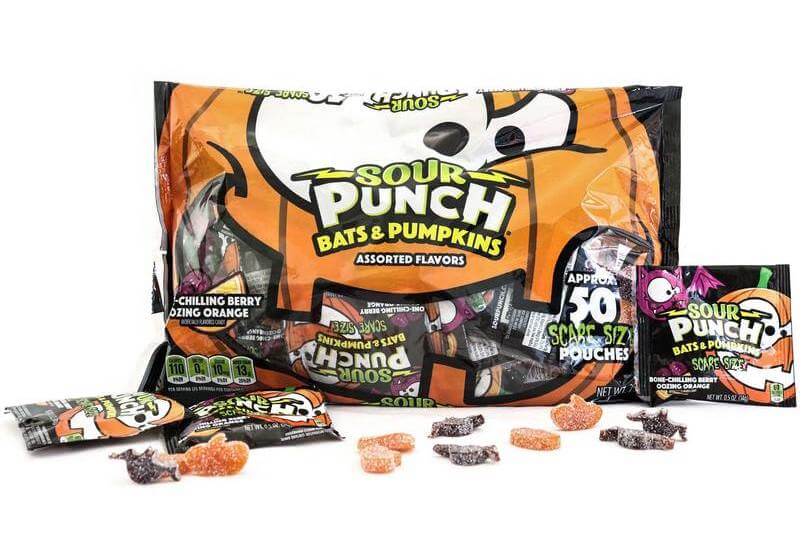 If you're having a hard time picking out of the above options, definitely go with the Sour Punch Mummy Mix bag. In addition to including individually wrapped Sour Punch Twists and bags of Bats & Pumpkins, it also includes Zombeans—which might be one of my new personal Sour Punch favorites. In Spooky Strawberry, Mortal Melon, Oozing Orange and Lurking Lemon flavors, these are essentially tiny lengths of sour straws coated in a soft candy shell. The flavor is bold and vibrant, but not too sour, and I really hope the brand will start offering them year-round. 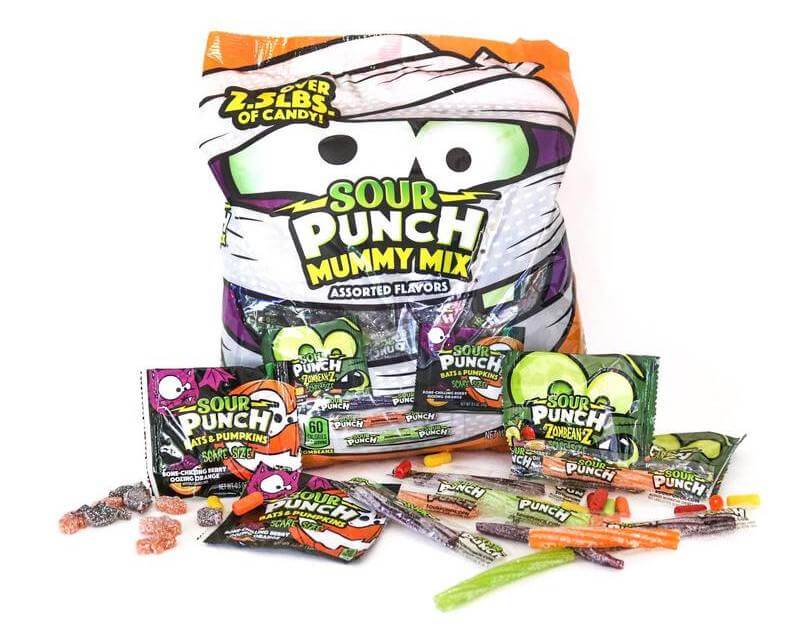 Now for something completely different: Candy Corn Red Vines. As someone who's personally on the fence about candy corn (and hasn't had any in years), I really wasn't sure what to expect from these bright orange twists, but once I took the plunge and bit it, I realized it wasn't bad at all. These twists have the soft Red Vines texture but with gentle caramel flavor notes replacing the classic "red' taste. It's not anywhere as sweet or strong as real candy corn, so while purists may not instantly fall in love with it, others will find it pretty approachable and tasty. I've already polished off a whole package of it on my own, and the next one is calling my name. 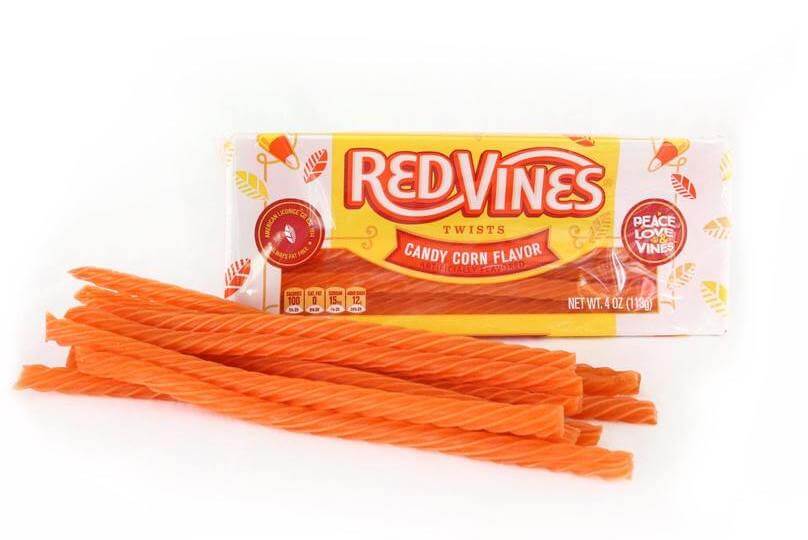 My package also came with packets of Torie & Howard Assorted Chewie Fruities—a brand I'd never heard of before. I wasn't sure what to expect until I opened them up and found that they were soft and chewy square-shaped candies individually wrapped in paper. They reminded me very much of another brand, so I expected something identical, but when I bit in, I learned this was anything but. Firstly, the texture is softer and chewier, and the flavors (Sour Berry, Blood Orange & Honey, Sour Apple, Meyer Lemon & Raspberry, Sour Cherry and Pomegranate & Nectarine) are even more mouth-wateringly delicious. They're even organic and vegan—unlike some other similar treats. They're exquisite, and I'm honestly tempted to swear off the competition forever in favor of these. 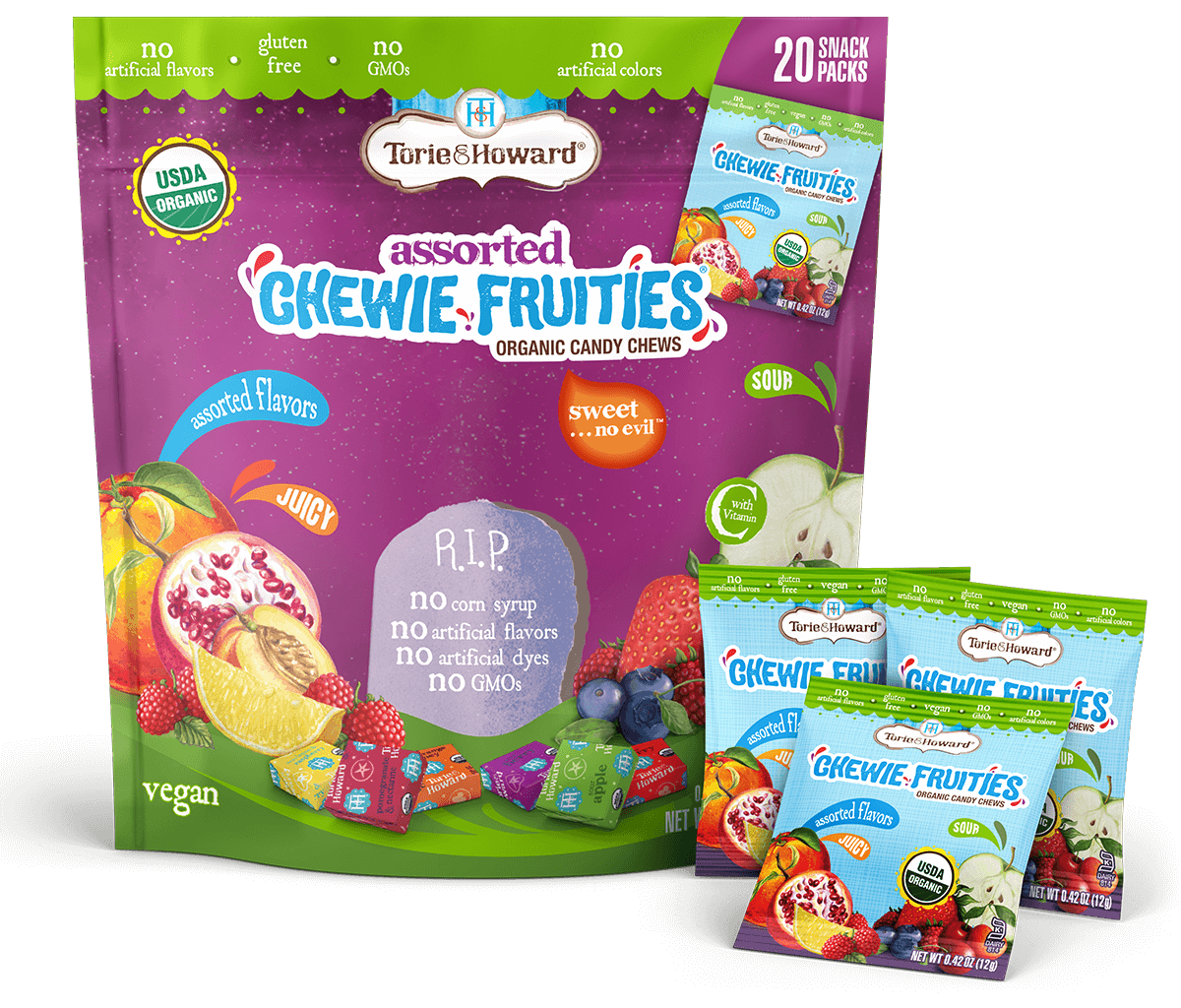 Can't wait for Halloween? Click HERE to learn all about John Kelly Chocolates and their fantastic chocolate skulls.