Here's What It's Like to Visit Taco Bell's Epic Test Kitchen

Have you ever wondered what it takes Taco Bell's culinary experts to conceptualize and create their whacky, yet delicious creations?

Well, look no further because we're about to feed your curiosity firsthand. The wonderful folks at Taco Bell's Headquarters in Irvine, California, invited us for a grand tour of the place where the Double Decker Taco Supreme, Doritos Locos Tacos and our other mouthwatering faves came to be.

Taco Bell-lovers, brace yourselves. Here's what went down when the editorial team (including myself, Ashley and Amanda) spent an afternoon in their Innovation Kitchen, where all the magic happens.

When we first arrived at Taco Bell's headquarters in Irvine, we practically jumped out of the car to take advantage of our first of many photo-opps in front of the big sign out front.

This was a glorious moment for our team, a bunch of TBell enthusiasts. 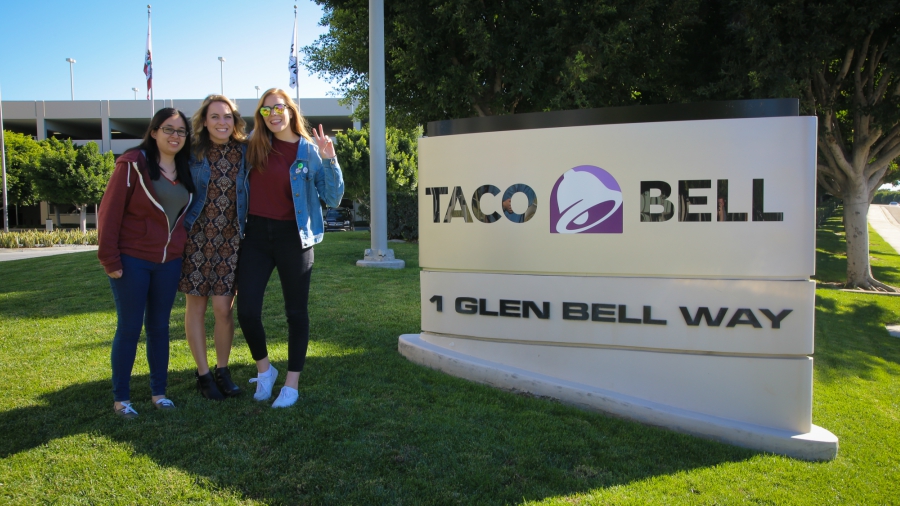 When we walked through the lobby's front doors, we were instantly greeted by a jumbo screen welcoming Sweety High. We hopped past the lobby's massive red couches and jumped in front of the sign to take a moment to soak in all the excitement before we started our tour. 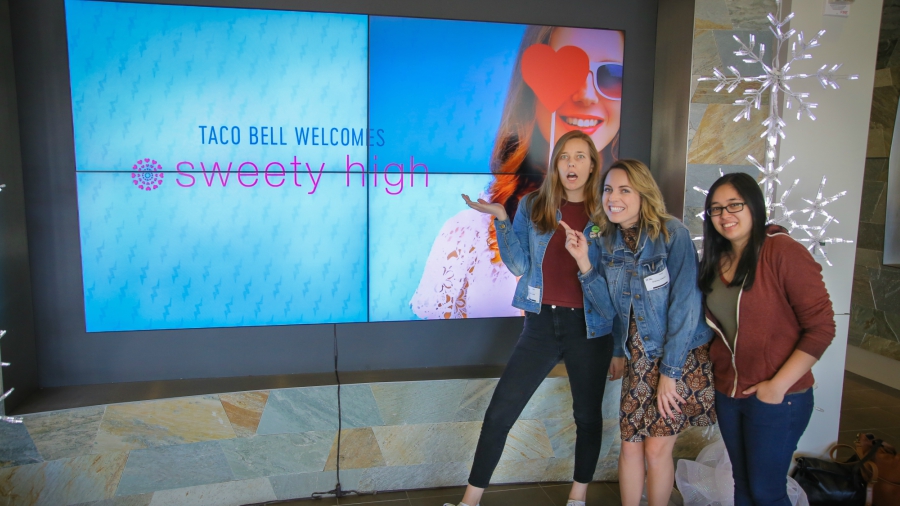 Moments later, we were greeted by Richa Anand, from Taco Bell's PR team, who would serve as our official tour guide for the day.

We didn't waste any time and dove straight into exploring the premises. Richa began by showing us some of Taco Bell employees' biggest perks throughout the space, including their office gym (used to combat the Taco Bell fifteen, the pounds you gain during your initial year at TB), a decked out employee lounge equipped with games galore, and then, finally, a cafeteria.

The cafeteria had its very own Taco Bell inside, very fitting. 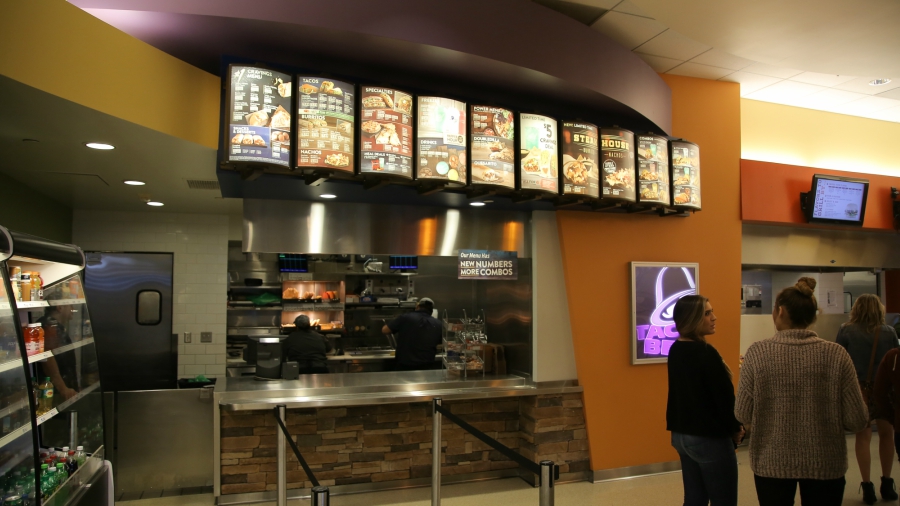 Next up on the tour was a visit to their wall of history, an extensive 5o-year Taco Bell timeline of events—beginning in 1962 with the opening of the first Taco Bell in Downey, California, and ending in 2012 with the invention of the Doritos Locos Tacos.

It was pretty cool to see how far Taco Bell has come. 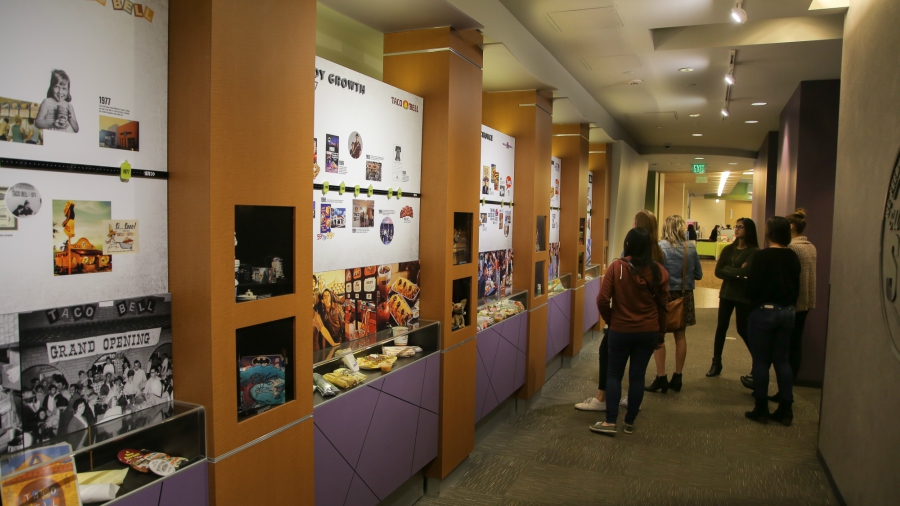 We then took a trip to the fourth floor where we met with Matt Prince, the Manager of PR and Brand Engagement for Taco Bell. He brought us inside a massive glass space called the News Room, better known as "Fish Bowl" by employees.

The room was equipped with a total of 12 social monitoring TV screens. These screens are used to check in on daily social conversations, allowing Taco Bell's PR team to get an overview of what consumers are saying about the brand and to identify everything from crises to brand opportunities. 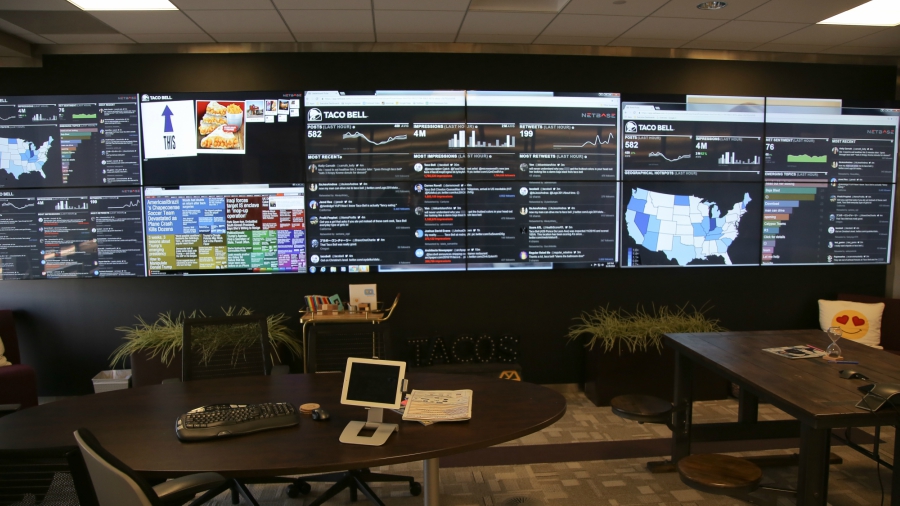 After our time in the Fish Bowl was up, the the moment we had been patiently waiting for all day had arrived. We were headed to the second floor to visit the highly anticipated Innovation Kitchen.

On our way there, we made a pit stop at the Sensory Panel—a room where all new products are tested out on the people who know and love the food best: the employees.

Employees are invited to enter this room, sit in a private cubicle and test the new food products while being monitored on video. After testing, they answer questions and give feedback, ultimately helping decide whether the new cuisine is a hit or miss. 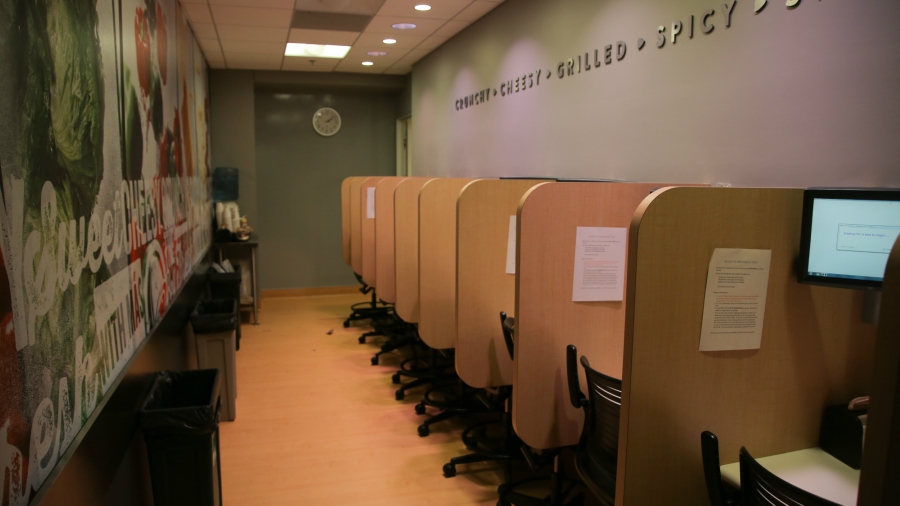 And then, it happened. We were escorted to a room called the Innovation Forum, which was situated to look like a classroom with rows of chairs, desk space and a stocked kitchen in front.

There we met Jeannil Taberdo, one of the product developers at Taco Bell who explained to us we'd be trying out some new and some not-even-released products. The first food we'd be sampling that day? The new Steakhouse Burrito.

This bad boy had two portions of steak, tomato bites, bacon, sour cream and their latest ingredient at TBell: queso. ???? 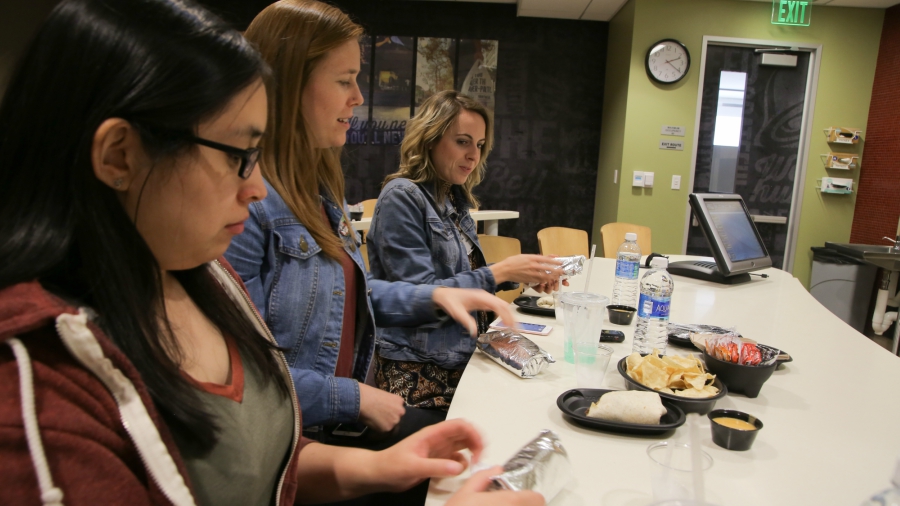 Not long after we chowed down on our burrito, a tray of their giant, heaven-like Steakhouse Nachos and a mini sample of their new Airhead Freeze was delivered to help us wash down the meal.

Once the Steakhouse experience was complete, Jeannil explained it was time to try one of Taco Bell's products that hasn't yet been released—their Naked Crispy Chicken Chalupa.

Essentially, this new meal takes two of our favorite ingredients, crispy chicken and taco shells, and combines them for the ultimate mashup. The crispy chicken itself is the taco carrier. Yep, you read that correctly. 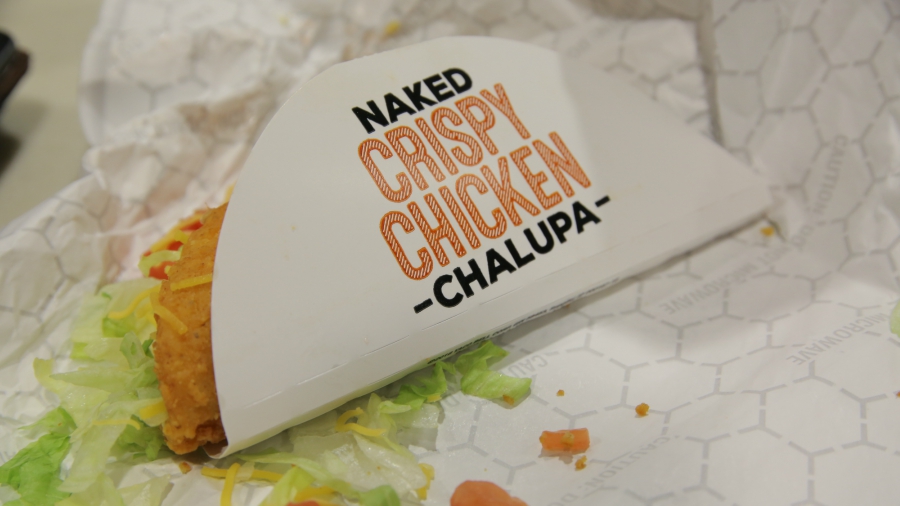 After sampling the food, we got to test out our own culinary skills by jumping into the kitchen where all of Taco Bell's ingredients were on the line.

Amanda, Ashley and I were all eager to get in there and get cooking. 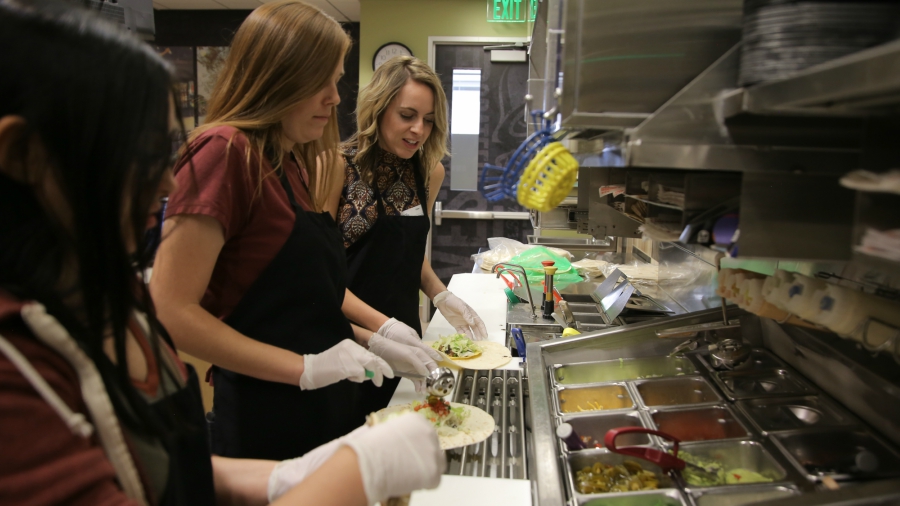 Amanda experimented by placing a chalupa shell inside of Taco Bell's signature Dorito shell. She loaded that baby up with guac, lettuce, potatoes and called it The Crunchy Cheesy Gordita. Clever, considering its shells were set up opposite of the classic Cheesy Gordita Crunch.

Look at that beauty. 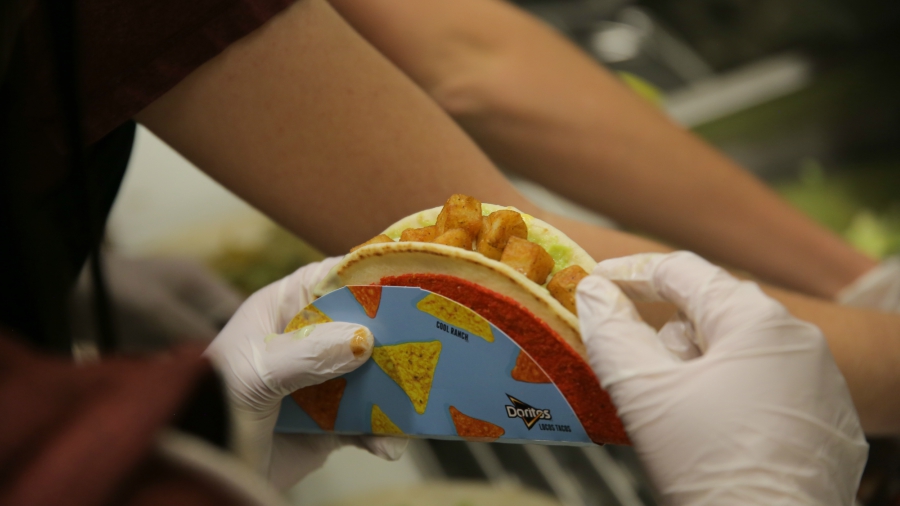 Because Ashley's vegan, she went with a simple burrito, still tasty nonetheless. She named hers THE Burrito.

I could have made a unique creation of my own, but instead I decided to fulfill my dream of learning how to make my all-time favorite menu item at Taco Bell: the Crunch Wrap Supreme.

I was pleasantly surprised by the easy process. All I had to do was place a tostada shell inside a large tortilla, load it up with salsa, lettuce, meat and tons of guac, and then fold and grill.

I was personally pretty happy with the outcome. I call this wrap The Guac, considering there's actually guacamole oozing out of it. 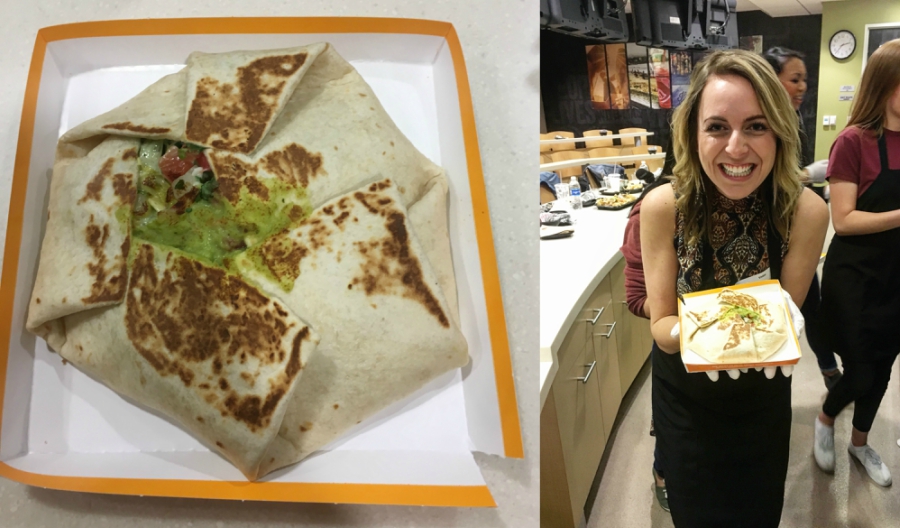 After chowing down on our creations, our time at TBell was sadly complete.

So what can we conclude from our experience? Taco Bell is one ultra creative and cutting-edge food chain.

The creation and development of their unique foods is taken so seriously, and the result is awesome fast food.

All that's left to say is, it was a good day at Taco Bell. 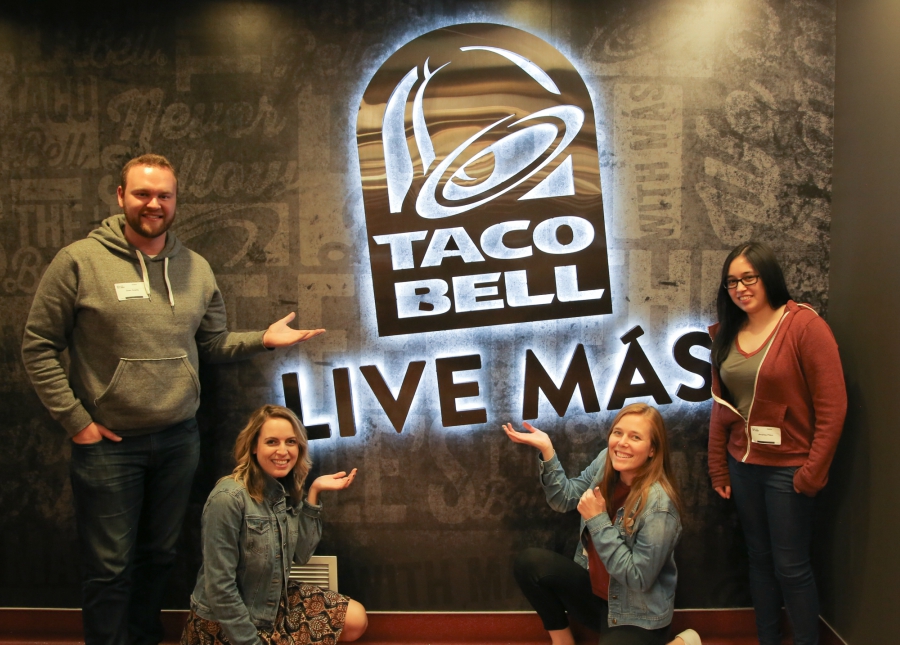 Want to learn more about the new Naked Crispy Chicken Chalupa? Head over HERE to read all about what we thought of the product!