The Sims has always been a game about simulating a silly slice of life by trying on different identities. As you create your own characters, you shape who they are through their relationships, their careers and the stuff you surround them with at home.

Soon, fame will also play an important role. The Sims 4's upcoming Get Famous expansion pack is all about making a name for yourself, and if you want to become a star, your Simstagram follower counts, celebrity level and reputation as an icon become important metrics to follow. For the first time, being an influencer will be job you can take on within the Sims universe.

I was recently invited to play this upcoming version of The Sims and to chat with the expansion pack's associate producer, Antonio Romeo, about everything the upcoming game has to offer. Below are some of the highlights.

Before I got my hands on the game, Antonio showed some of the features that only become available at a later stage in the career of an acting Sim. I got to see a day in the life of an actress at the highest possible acting level. Because she was so famous, she worked on an expensive set at Plumbob Pictures movie studio, and she was getting ready to film a high-budget sci-fi western. 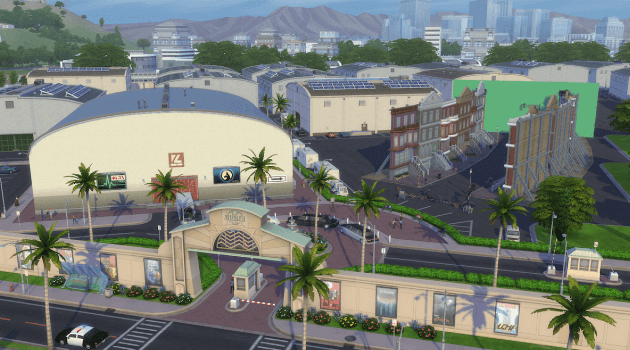 A successful gig started with getting her hair and makeup done. This totally transformed the character's look—though Antonio assured me that any changes would revert when she got home for the day. After all, developers don't want any of the time spent carefully curating a character to go to waste.

Next, she headed over to the wardrobe area, where she got dolled up in an old-timey cowgirl dress, before carefully practicing her lines in front of a mirror. When she was ready for her closeup, she spoke to the director and filming began. To act out the scenes, players select different tape markers on the ground signifying where the scene will take place. For each action, you can either pick a risky action or safe one. While there's a chance of failing if you select the risky option, you get better rewards (and get to see more interesting scenes play out). The scenes I watched involved a laser gun fight, a guitar performance and an alien delinquent being thrown in jail, and I'm guessing that's only the beginning of the unusual stories that can be told on set.

There are other benefits to a high level of fame as well. This actress had her own luxurious dressing room on the set, while I was told lower-level actors don't get dressing rooms at all. Even the craft service table was serving elegant roast turkey dinners, while up-and-comers might be expected to eat pizza instead.

But this Sims game also gives players the freedom to become stars outside of the studio. Every single item that I saw in the studio can also be placed at a player's own home lot, given they have the money and space at home to pull it off.

At home, the actress's boyfriend had different aspirations. He was a DJ, as well as an aspiring influencer. While he was creating his own sick beats (which the player can customize by selecting tracks and adding or removing different layers), he was filming the entire thing on an expensive drone, which was simultaneously posting his process as a musician to his social accounts.

Simstagram is a big deal in the Get Famous expansion. The character increased his follower count simply by announcing that more content was on the way. Other actions can also increase your credibility (as well as your social numbers) as you work toward fame.

This will also be the first game where you can craft your own custom careers. You can do whatever you like as a career and create your own special title and clever description for it. With your trusty drone recording your every move, you can become an influencer around pretty much anything you can do in the game. Sounds a little bit like real life. 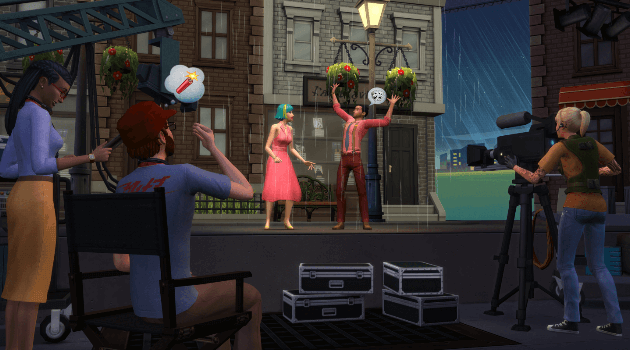 Items related specifically to new career paths in The Sims aren't the only objects being added to the game. If you're going to become rich and famous, you're going to need somewhere to keep all of your wealth, and this game introduces that in the form of bank vaults. The more money you deposit in your secure vaults, the more you can see your riches on display. And who doesn't want to swim around in a big pile of money?

The new game also features special sleep pods. While expensive, they fulfill all of your Sim's needs while they sleep, allowing you to focus on advancing your career rather than spending precious time bathing or using the restroom. Antonio recommends saving up for these items as soon as you can because they're so useful. Essentially, if your Sim has breakfast in the morning, they'll be able to make it through the entire day happy and healthy without the need for unwelcome breaks.

And though crystal healing already existed in The Sims 4, the Get Famous expansion adds to what they can do. Previously placing crystals in a room allowed you to get an emotional aura from them, but now you can take those benefits with you on the go with a special crystal crown. Just place the desired crystal in the crown and wear it to bring those effects anywhere.

Get Famous introduces character quirks to the franchise, and as your character becomes more of a celebrity, the more likely it is that they might develop a weird quirk. For example, if your Sim is always in front of the mirror, they might have a vain quirk, or maybe one who's never not on their phones will develop a reputation for it.

Quirks can have a slightly negative impact on how others view you, but, thankfully, they're not permanent. It's possible to do a special cleanse that removes the quirk from your Sim—but that doesn't mean it won't return if you don't change your behavior.

Del Sol Valley is The Sims' new Hollywood equivalent in the Get Famous expansion pack, and it's gorgeous. Though players will start in a quieter part of the valley, as they work they way up to the top of the food chain, they'll be able to build their homes on big hills overlooking the glory of the city. 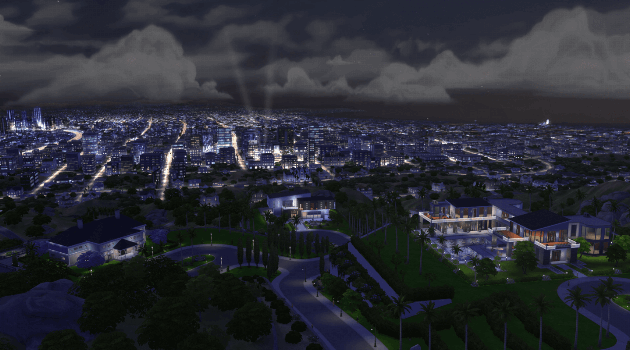 Mirage Park is a critical hub of Del Sol Valley, and it's where celebrities congregate at all hours of the day. To one side of the park, there's even a walk of fame where you might be able to place a tile if you get famous enough. Any time you visit the area, it's likely that you'll run into a Sim celeb, whether it's one of the city's most classic acting stars, members of a Kardashian-like celebrity family, or the real-life singer and social media superstar Baby Ariel.

Baby Ariel worked directly with the developers of Get Famous to create her character, from her appearance down to the specific aspects of her personality. If you want to get famous in the game, it's a good idea to befriend her so she can help you get your own brand off the ground. 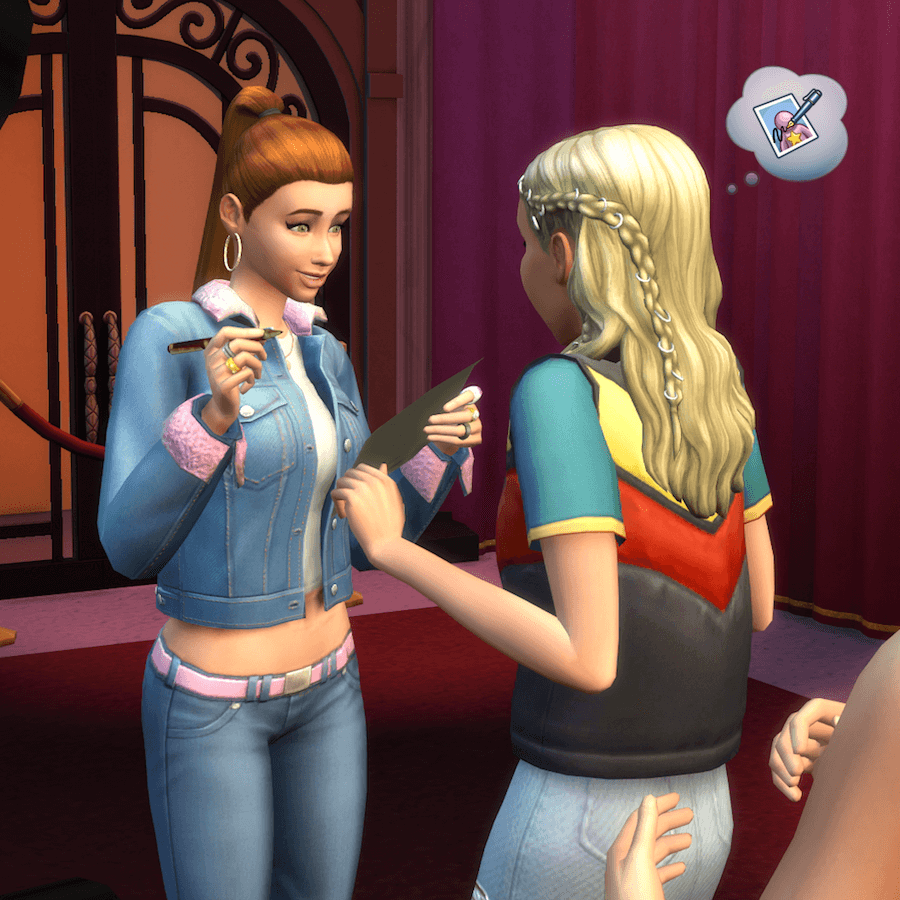 Balancing fame can be a tricky thing, and simply associating with the game's bigger celebrities can sometimes make you more famous in the process. When you see a star on the street, you can introduce yourself to them and ask for a selfie or an autograph—but they won't always say "yes." Celebrities are busy people, after all, and the bigger the celebrity, the more likely they are to find you unworthy.

Ultra-famous characters are constantly surrounded by an angelic glow (which can be toggled on and off), so if you work hard enough, you can glow, too. When you get famous, people will even stop you in the street to chat you up, and paparazzi will try to catch you in a photo opp. At one point, I saw a character who was so excited to meet an influencer that he fainted behind a bush. If you create multiple characters, you might see one of your more famous ones parading around the park while you're there to schmooze. 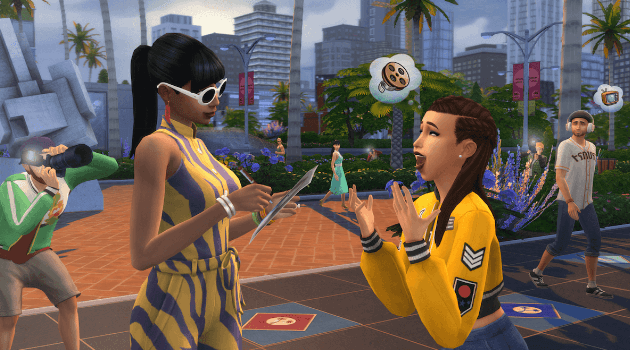 Being famous can also get you into high places. When you're a nobody, you're likely to get snubbed, but as you rise in rank, you'll gain entry into great parties and V.I.P. clubs. Fame is almost a currency in Get Famous, and it can get you pretty far in your Sim's life. 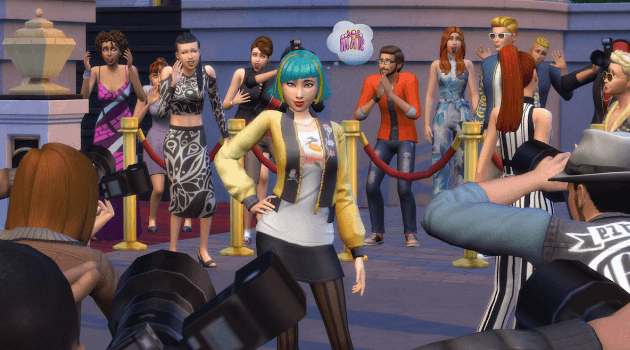 Get Famous drops on Nov. 16, so if you're a major Sims 4 fan, be sure to pick it up and get ready to fulfill all of your influencer dreams.

If you adore The Sims, click HERE for some special tips and tricks from The Sims executive producer Lyndsay Pearson.