I've been playing The Sims Mobile for about a week now, and I have to admit I'm utterly addicted to it.

The new game from EA and Maxis officially launched this week, but I was given early access to check it out ahead of time, and I've struggled to put it down since.

I've played some Sims games in the past, and even though I've always had a lot of fun with them, I never quite felt like I was doing a good job. Even when I used cheats to get unlimited money, there never seemed to be enough time in the (in-game) day to balance each aspect of my Sims' lives. I never got to focus on the fun character creation aspects or building out relationships because I was too busy trying to do things right. 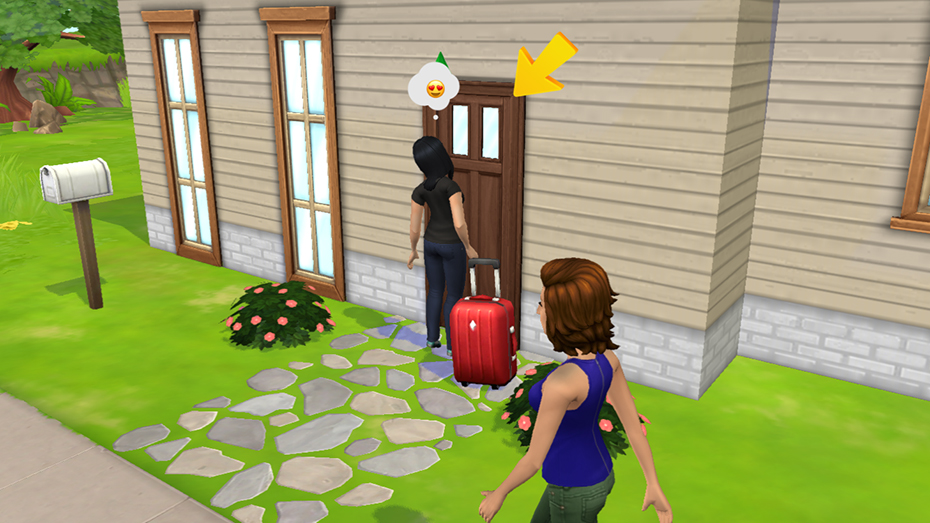 Initially, what I liked most about The Sims Mobile is that it strips away all of the stuff that feels like an obligation. Unlike a traditional Sims game, you never have to worry about your Sims starving or getting sick because they never bathe. They don't double over in exhaustion, and they definitely don't die because they started a fire in the kitchen or because someone took a swimming ladder out of the pool.

However, as a free mobile game, it can't give the players complete freedom. The game works on the freemium model, meaning there are real-time timers to pretty much every action. For example, you can start a work shift at a coffee shop lasting two hours and leave your phone alone. After those two hours, you'll earn experience and goodies for it.

Or, like most players, you can actively participate, making your Sim interact with customers, brew coffee and clear gum from tables. Each action uses up your Sim's energy, which is limited but also allows you to finish your task faster. Much of the game is a balancing act of seeing how much you can accomplish with the energy of your Sims. Certain household items, like beds, showers and toilets can be used to restore energy, but it's limited and they take time to recharge as well.

Freemium games know exactly how to play me. Sometimes, when my Sims run out of energy, I'll sit there and wait a couple of minutes for my Sim to recharge by one so I can make them do something. Then, I wait for another two minutes to act again. It's a pretty vicious cycle.

Players also get a daily to-do list, and completing each task gives you a bonus each day. Some of these tasks feel like they're there to keep your Sims balanced, like tasks that ask you to interact with other Sims, advance your career or make home improvements. 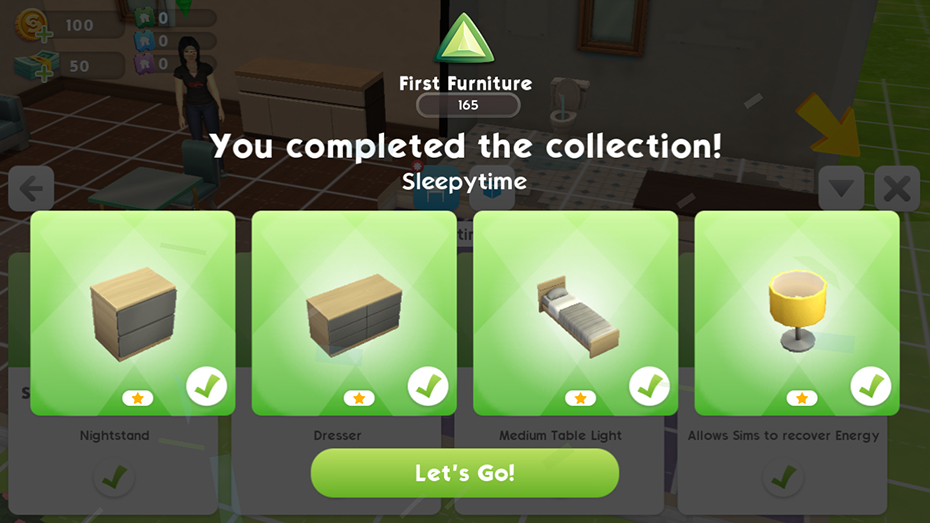 Others feel a little like busywork. After spending too much time customizing my Sims, I don't see why I need to change their appearance every day to complete my to-do list. There's also an in-game sticker system where you can assign bunny stickers to other Sims for some reason. I've just been giving out stickers of a hipster rabbit to random people every day to meet my quota.

Since I'm the type of person who can spend half an hour customizing character avatars, I had a lot of fun with the finely tuned character creator in The Sims Mobile. Though it doesn't have the most diverse customizations I've ever seen, I was still able to get a decent likeness of myself at the end of it—although I learned later that there were even more options, but I wouldn't get them until I made it further into the game. I'm currently saving up for a haircut that better resembles my own (even though I could be using the in-game currency, Simoleons, in much more practical ways elsewhere in the game). 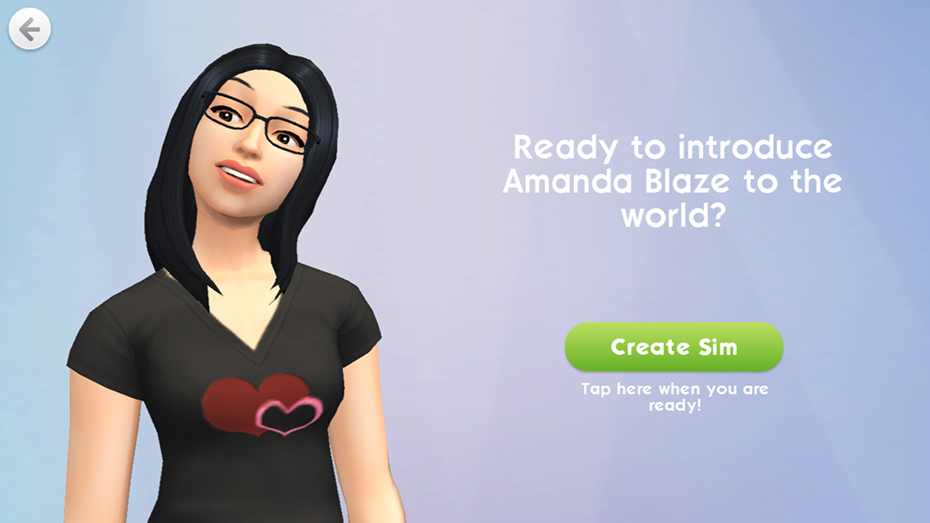 You can spend hours customizing your Sims or building up and upgrading your house, but for the really good options, you'll have to spend a lot of Simoleons. Earning it takes time as well as patience. If you're anything like me, you might also want to set timers so you can live your life in peace until your Sims complete their tasks, so you can assign new ones.

The game also keeps me coming back by always having more I can do. When I feel like my relationship is coming along nicely, it reminds me to nurture my hobbies and career. Whenever things feel balanced, I remember I have a home to grow and renovate. There are always upgrades to make, and a lot of little steps to take before I can get the money to do them. Whenever I do play, there's only so much I can do before my Sims run out of energy and I have to let them relax for a while. Perhaps that's what makes the game so difficult to put down. 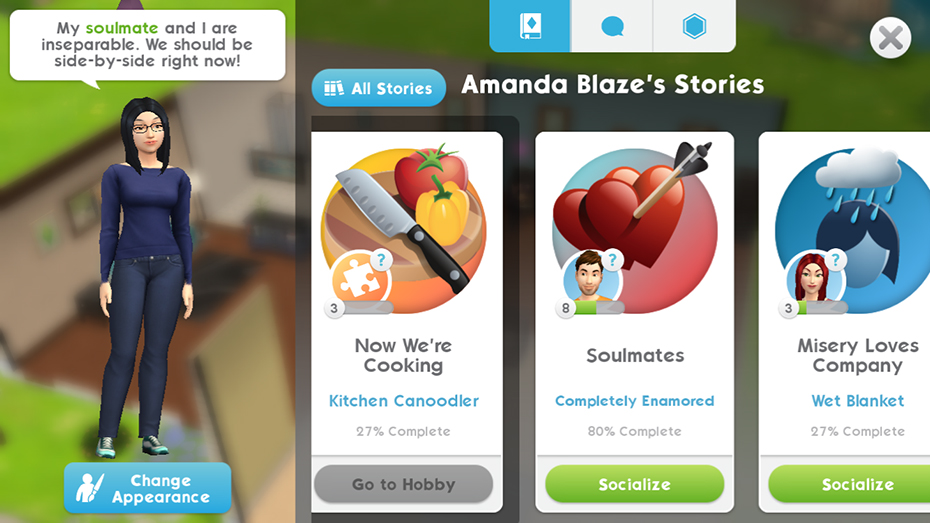 Like many other Freemium games, The Sims Mobile will also give you frequent opportunities to watch ads in exchange for bonuses. I'm a sucker, so I do this pretty much every given opportunity because I want to progress. Even though I refuse to pay to play, they're still making their money off of me.

Of course, there's always the option of spending real money on money for the game. If you were really eager to improve your life in The Sims, you could easily spend hundreds of real-life dollars, so be careful! However, I've never paid money in a freemium app, and I don't plan to start now, regardless of how addicted I am.

Within just a few days of playing the game, I moved into a new house, became a world-class fashion designer, got engaged, got married, took up a cooking hobby and had a baby. 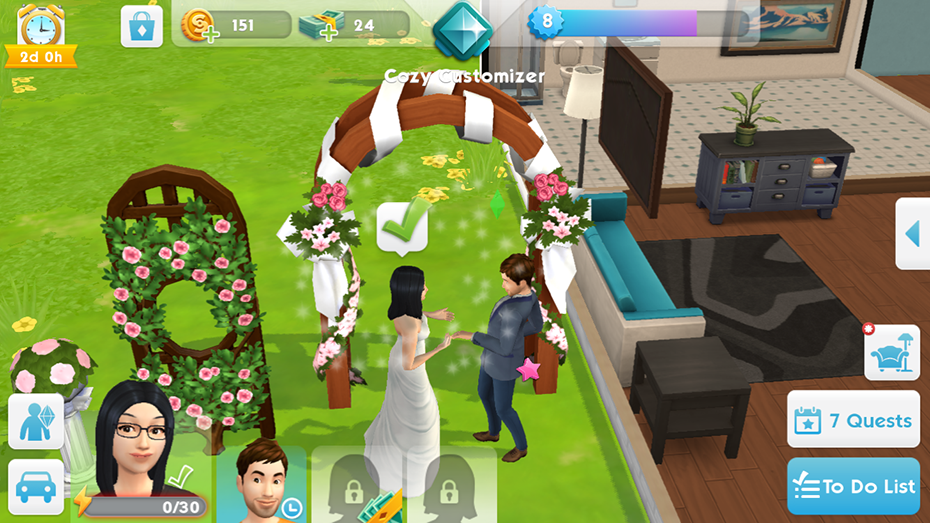 So far, it feels like there's a lot to this game that I haven't yet discovered, and it will probably get many updates over the coming years as players catch up with everything it has to offer. My Sim had the baby today, and while it doesn't seem to need much tending so far, I'll have to see what develops from here. 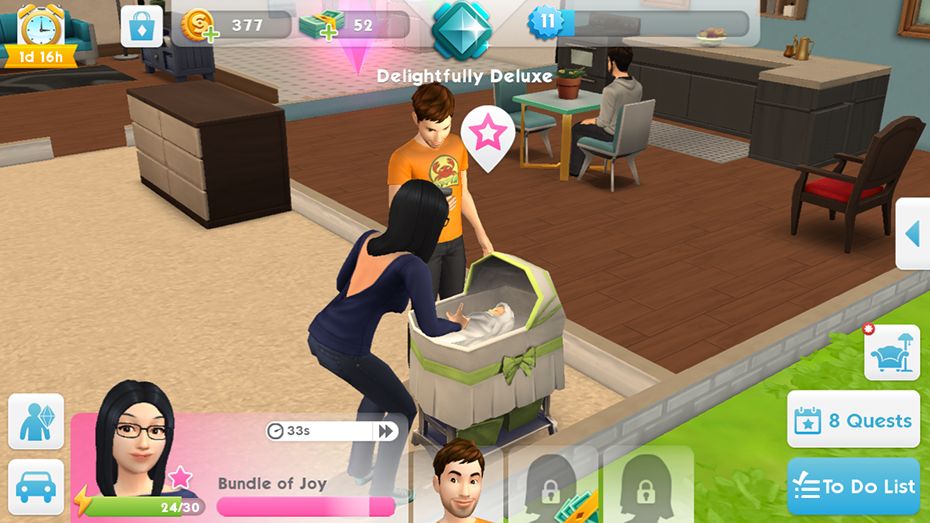 If you love the customization and social aspects of the other Sims games, you'll love The Sims Mobile. However, if you're trying to stay off of your phone or don't have the free time to sink a lot of your day into an addictive mobile game, stay far, far away. Once you get hooked, it's really hard to not constantly come back for more.

It's available to download now in the App Store and on Google Play for free.

If you're all about The Sims, click HERE for top Sims tips and tricks from the executive producer of the game.