I Tried Thinking Egg, the Mindful Fidget Toy That Helps You Slow Down and Breathe

It's the hectic holiday season, and as I make more time to get stuff done and check more things off my to-do list, I find that I have less time to decompress enough to start feeling human.

I've had to make a conscious effort to really stop and be present during the day so that time doesn't totally slip away from me. So when I stumbled on Orijin's "The Thinking Egg," a product designed to help people slow down and be more mindful, the concept immediately resonated with me.

I reached out to the company, who were generous enough to send me one of each of their four Thinking Egg varieties (plus a finger-massaging FL•O Ring and a cute little carry sack ) for review. Here's what happened.

The Thinking Egg is a small, egg-shaped tool that's designed to remind its users to be more mindful and present in their daily lives. By popping it in your pocket or keeping it on your desk, you can always have it around when you need a physical token to help you get off autopilot and into living every moment. 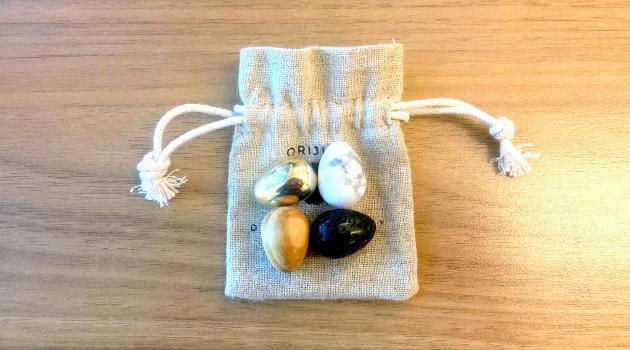 According to Thinking Egg's website, egg symbols have long been associated with life, wealth and promise, which is why the shape was selected for the job. They come in pine wood, lava stone, howlite stone and brass metal, and each organic material has its own metaphysical properties to keep in mind while you use them.

When I opened up each of the four Thinking Eggs, I was surprised to see how different they really felt from one another. All were the same size—a little less than an inch long from base to tip—but they all had different weights and textures. And though they were egg-shaped, each one had a flattened bottom, so I could stand them up without them rolling away. While I did feel a sense of calmness from rolling them around on a table together, or tossing them around in my hand, I really had to play with them separately to find out whether I could get each one's full effect.

Pine is said to have energizing properties and to help with emotional stability and concentration, so I brought it out when I was trying to hone my focus. It was by far the lightest of the four eggs, and sometimes when I'd pick it up I'd be shocked by how little weight it had. It was as if it was made of foam.

I preferred to keep this egg somewhere in my sights while I was working on something, because when I put it in my pocket, I'd totally forget about it. When I had a tough task that required some thinking through, it was helpful to have it somewhere visible so that I could remember to take it out and hone my focus.

And I think it was effective in doing just that, primarily because it was so light that I always had to watch it and be very conscious of where it was because it always seemed so easy to lose. I got the impression that if I were to drop it, it would bounce away never to be seen again, so it had to be the center of my awareness whenever I played with it.

Because it was so light, I preferred to use it by rotating it in my palm with my fingers. When I wore rings, the Thinking Egg would sometimes clink against the metal to create a satisfying sound and a sensation that I felt really clicked my mind into gear. It wasn't my favorite of the Thinking Eggs for every occasion, but it did consistently help me narrow my attention to one place.

Lava stone—solidified from molten lava—represents strength, and is said to stabilize those going through tough changes in life, while it also helps them let go of anger. While there was definitely more heft to this egg than the wooden one, it still wasn't too heavy, thanks to the air bubbles in the stone.

Because this stone was a little heavier, I could bring it with me in my pocket and occasionally feel its weight, reminding myself to take a step back and seize the moment. It was also just the thing for when a situation seemed difficult. I could use it to amp myself up and feel more ready to take things on.

And because of the natural air holes in the stone, it was also great for infusing with essential oils. I've recently become obsessed with ylang ylang, which has relaxing properties, so my lava stone Thinking Egg is currently soaked in the stuff, boosting its strength-giving power. I love the texture of the lava stone egg on my fingers, so I preferred to utilize it by rolling it around between them, though I'm guessing that some people might be bothered by the hole-ridden texture. 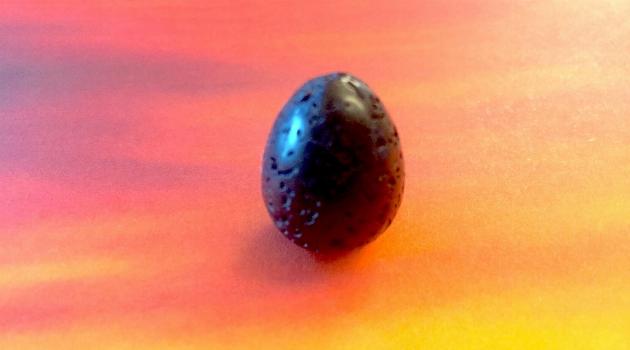 Howlite is associated with grounding and calming, and is said to prevent stress and overactive minds while also helping with self-discipline. I found it a bit heavier than the lava stone, and much smoother in texture. In my opinion, it was also the prettiest of the four Thinking Eggs.

For whatever reason, I found this stone more versatile than the others. I enjoyed shifting it between my fingers, twirling it like a top on a hard surface and rolling it around, and found each of these experiences equally satisfying. I could bring it out whenever I was feeling a little overwhelmed with something and work through that energy. Plus, it would typically stay cool to the touch no matter how much I handled it, and I found that very soothing when I was feeling a little stressed out. 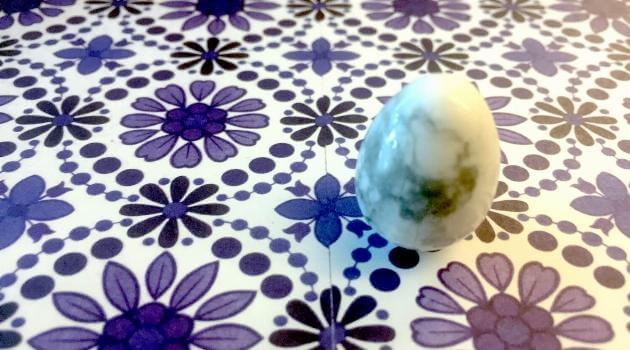 Last but not least, I focused on the brass metal Thinking Egg. This revitalizing egg combines copper and zinc to simultaneously boost your immune health, while also increasing melatonin, which regulates your sleep and wake cycles for optimal restfulness.

My first impression was that it was so much heavier than it looked, making the other eggs feel like they weighed nothing. Because of this heft, it didn't take much for it to feel like it was working its magic. While I didn't really enjoy playing with it in my hand because of the weight, I did enjoy rolling the bronze egg around on a surface in just the right way so that it would come back to me like a boomerang.

Better yet, I found that its use would shift based on what I needed. I could toy with it before bed to get into a more relaxed state of mind, or play with it when I was feeling tired for an energizing pick-me-up. Something about this egg felt more magical than the others—but maybe that's just me. 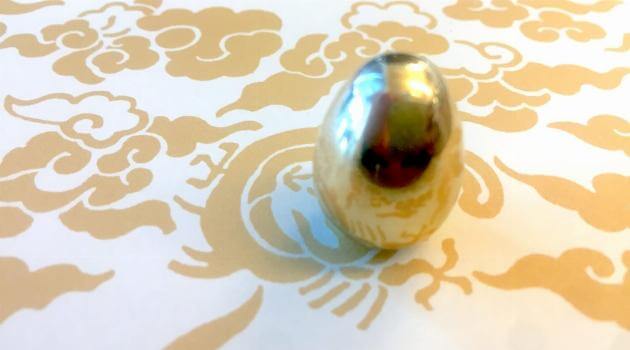 The Thinking Egg won't be for everyone, but if you believe in the power of mindfulness and need a small but mighty reminder to practice it, these little eggs can have a big impact on your life. They act both as a suggestion and a fidget toy, and they're small enough to take pretty much anywhere.

While I'm sure that not everyone will get the same benefits out of them that I did, I thought each one was effective in channeling the feeling it was supposed to. I think that the $16 price point might turn some people off, particularly because the eggs are so small, but if you believe it'll help you, it's probably worth it. And don't forget to enter coupon code "Sweety High Love" at checkout for a 20% discount.

For more on the power of intentionality, click HERE to find out what happened when I wore an empowering Fantasy Stone for a week.