Valerie Ding On CERN, Collaboration, and the Piano!

Valerie Ding is one of 15 young finalists in the Google Science Fair. Her project, involving quantum dot solar panels, has the potential to change the world! 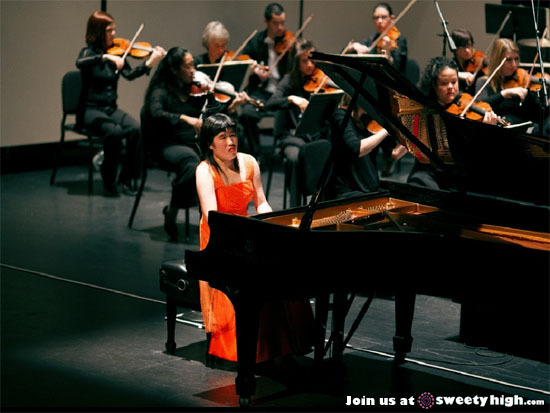 Valerie spoke to us recently about her project in the fair. Read that interview here!

Valerie has a history of involvement in science, including winning an award at the Intel International Science and Engineering Fair, or ICEF, last year.

She was one of 12 kids internationally to win an all-expense paid trip to CERN, or the European Organization for Nuclear Research, in Switzerland.

"It was a really great bonding experience with the other winners," Valerie said. "We got to visit awesome places like the CERN control center, and got to see scientists working together looking down at this huge field of computers and people in a huge collaboration. That was probably the highlight, to get to see the social aspect to science."

Valerie explained that the experience was enlightening to her. Valerie's impression was that science was an individual pursuit, but the collaboration at CERN proved otherwise.

"It's not something to do by yourself, like when you think of this classic mad scientist by himself in a basement," Valerie explained. "It's a great example of how to collaborate.

Valerie also stressed that the sciences are interdisciplinary, meaning that perfect math skills or the ability to stay on a computer, programming all day, are not necessary skills to be a scientist. Instead, to find success in science, you need a team with all all kinds of skills, working together in tangent.

Because science is so interdisciplinary, lack of communication can be a big issue.

"There needs to be more communicating across across fields of science," Valerie explained. "There are the theoreticians and experimentalists, and a lot of the time the two work indepently."

Valerie explained that since she's not at a university and combined to one kind of research, she was able to study what interested her and keep a more open mind.

She combined quantum physics with environmental sciences and renewable energy to come up with an algorithm that might speed up research on quantum dot solar panels.

"Being one of the forces to combine the two fields is really something I have not come to terms with," Valerie said. "I know there are plenty of people working on these things, and it will take much more than me to take it to the next level. But I want to be a part of that. I think this is needed to revolutionize the energy industry. We live in this world. We need to protect it, and we need to make sure it doesn't go to waste."

The key to new discoveries is asking questions, Valerie said.

"Ask for help," Valerie suggested. "A big part of science is why and how and what happens. Having an inquisitive nature is really important. Not all people are naturally interested in chemistry and physics, I understand that, but everyone has their calling."

Valerie, for example, isn't just a scientist. She's also an accomplished pianist who has played with the Oregon Symphony and Oregon Ballet Theatre Orchestra.

"Piano is a big part of my life," she said. "I'm always exploring something new, and it's a constant discovery."

While some see the piano as a very structured instrument, Valerie believes it has huge potential as a creative vessel.

"An instrument has a set number of keys," Valerie said. "You wouldn't think it was that creative, but it's like painting. There's different textures, different ways to hold your brush. You can make it softer, or louder, to convey your message. That's the reason people do things, is to convey their message."

Valerie has been playing the piano for 11 years. She said it's her daily escape from the world.

"When I'm doing homework, it can be mentally rigorous, and very logical, an sometimes mechanical," Valerie said. "When I go to the piano, there are rules so I'm not lost, it's a lifeline, but you can dive down and explore and find yourself."

Valerie also said that she sometimes finds herself thinking about science and music together as one entity.

"If I experiment a little I make sense of what's happening," she explained. "It's fundamentally how the mind works. We have this tendency to combine things. With science you let people know what's going on and how things work with. With piano, it's more about finding yourself and showing that to the world and creating something that people identify with. There is beauty in both of those pursuits."

Like science, music is about collaboration. As does an orchestra, science benefits from different ideas working together in harmony. Valerie said she has learned a lot about herself as a scientist by also being a musician.

"It's not about competition," Valerie said. "People think it's the opposite of science and math because it's artistic, but I think it helps me discover who I am, in a way. Plus, It's a way to vent, especially when you're stressed about something. It's not always about that, but if you are stressed or feeling down, having something artistic to turn to is really important."

With the Google Science Fair voting sessions now live, Valerie has been hard at work on putting the final touches on her presentations!

To vote, click here to check out all of the entries in the Google Science Fair and vote for your favorite!